Symphony's Achal Bakeri on How to Make Your Company Great 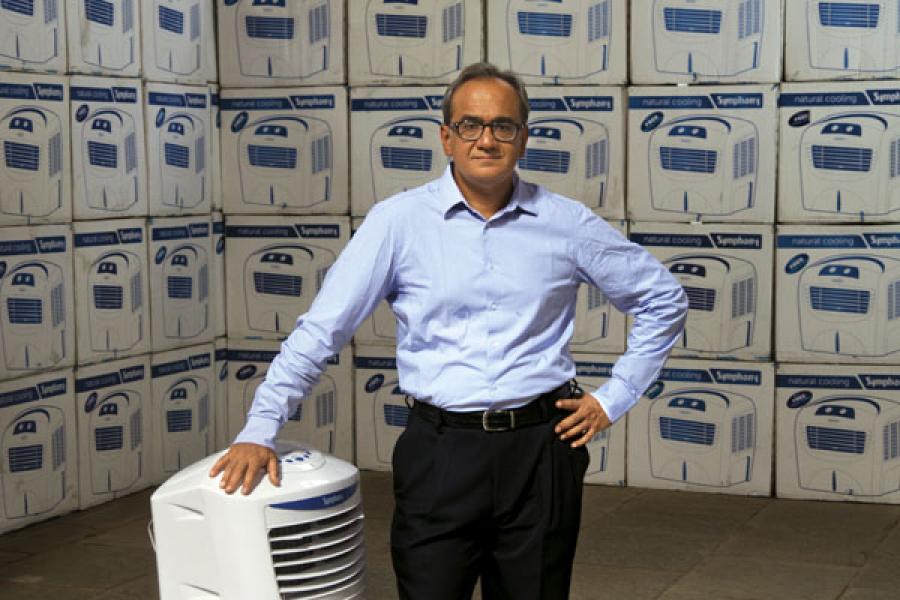 Achal Bakeri
Age: 52
Designation: Chairman and managing director, Symphony Limited
The challenge: To rescue an insolvent company that was once a household name in the air cooling business
How he did it: By getting out of non-allied products like washing machines and water heaters and focusing on his core air cooling business
What he has achieved: Brought the company back to profitability and doubled margins. Symphony also acquired an industrial air cooling business in Mexico, making it the world’s largest air cooling company

My family is in the real estate business and I got into the air cooling business by accident. When we started Symphony in 1988, there was nothing like an air cooler industry. There were only manufacturers in the unorganised sector.

Here’s how it happened. In 1987 we moved into a new house in Ahmedabad, parts of which couldn’t be air conditioned as it had high ceilings and long passages. Our architects suggested that we install air cooling. Till then we had never used an air cooler. The performance was great but the product was an eyesore and we had to camouflage it.

That gave me an idea: Why can’t I make a better air cooler?

Because it was so successful, in 1989 we expanded distribution to Gujarat and neighbouring states and by 1990 we had expanded to all over the country. We also went on the national television network. This was the first time an air cooler was advertised on TV in India. And so, two years after launch, Symphony had become a national brand and had a sort of national distribution. It was patchy, but at least it covered the whole country.

Thereafter things moved swiftly and in 1994 we had our IPO. By then we had added some more models. We had moved into a larger factory. But once you list, the financial market has its own pulls and pressures. At about the time of the IPO the market was advising us to expand our product range. Customers also wanted us to broaden our product range. Their argument was that we cannot focus on only one product that is very seasonal.

After all, our competitors Crompton Greaves, Usha and Polar were multi-product companies. So we got into products that were either counter-seasonal, like winter products, or products that sold around the year. Water heaters, room heaters, flour mills, water purifiers, air conditioners, washing machines and exhaust fans.

None of the other products succeeded. The reasons were different for each product category.

For instance, our water heater was the first of its kind. Till then they had metal cylinders and there was absolute product parity, brand A was the same as brand B was the same as brand C. Symphony designed a water heater that had a nice sculpted form. There were new safety features. But we had some technical glitches and by the time we ironed them out, established players stole our idea and with it our market.

Similarly, we launched a washing machine. We had developed the world’s first all plastic washing machine [except for the motor]. We thought it would be a cheap product so we developed it, but our competitors Videocon saw us coming and they lowered prices. They had a huge volume advantage and better distribution reach. They introduced an entry-level washing machine and we couldn’t compete with them.

In the process of developing these other products, two things happened. First, a lot of money went into development. Second, money went into marketing these products. As none of the products succeeded, there was financial strain. The other thing that happened was that we took our eye off the ball in the air cooler business, so the innovation that we could have done there, the range expansion we could have done didn’t happen. Our competitors, who were snapping at our heels, were growing while we were focussed on other products. So air cooler sales went down and the other ones didn’t succeed.

As a result, by 2001 we had completely eroded our net worth. We became a BIFR [Board for Industrial and Financial Reconstruction] company.

In 2000 we did not even have enough money to give a Diwali bonus. We borrowed money from other family businesses to pay the bonuses. We had difficulty making payments to suppliers. Money we had raised in the IPO was lost. Our stock had become a penny stock and the market had written us off. All that we had earned in the prior years was lost. We had run through our bank loans. In total we burned through Rs 50 crore.

That’s when I had two options—to shut shop and be part of the family business or to try and revive the company. The easier option would be to shut shop, but for me this was a company I had started and my personal identity was aligned with the company. Shutting shop was not something I was willing to do without giving it my best shot.

So we decided to focus on coolers and exit from all the diversifications. We cleared out inventory and we did not manufacture anything new.

We started developing new models of air coolers, products which were better than what we had, better than what the competition had. We started creating new formats that did not exist till Symphony came along and started cutting the cost of manufacturing.

The new models were crucial as we were able to get better realisations per unit. Cutting costs helped us further increase these realisations. And that is how, between 2002 and 2008, our net margins doubled from 10 percent to 20 percent.

As we focussed only on coolers something else happened. We decided to expand into overseas markets. We started off with giving an existing manager the responsibility of developing exports. Now we have a whole team in India and different managers in over 60 countries.

Our most significant turning point came in 2008. We got an opportunity to acquire a majority stake in a Mexican company that was started by Adam Goettl, the man who had the first air cooler patent in 1930. Goettl had started the company and then sold it. Over the years it passed through several owners before it wound up with a US private equity firm in 1999. I had visited this company, International Metal Products Co (IMPCO), in 1992 when we started.

At its peak it had sales of $123 million, but the PE group had really run it to the ground. They had sucked the company dry and it had huge debt. We bought it as is and because of our BIFR experience here we had the courage to get into something that was in financial difficulty. We took in through the Mexican equivalent of chapter 11 and paid the debts off with money sent from India.

IMPCO gave us access to the US market and a range of products that Symphony had never developed. What we had always produced in India were coolers which were in plastic, smaller, portable units. The Mexican plant makes larger units made out of metal. There, whole homes are air cooled. You stick a cooler in the attic and have ducting all around the house.

Now in terms of technology the Indian and Mexican coolers are the same. But here was an existing plant, here were developed products, here were the tooling [moulds and dyes], the engineering drawings, the people who had been doing this for 50 years. To replicate that would have taken a lot of effort and time. We would have had to bring in people from outside India as that was an expertise not readily available in India.

So now we have introduced those products in India and made a small start. People here are still warming up to the idea of cooling at a large scale. Recently, we cooled a 2 lakh square foot hall for Baba Ramdev in Haridwar.

This is something no one is doing on an organised scale in India. This is a virgin market. The potential is huge. We are currently talking to Walmart to air cool their super centres in Central America.

Over the years we have also refined our manufacturing model to make it asset light. Now we don’t make any part of the cooler ourselves. Instead we develop the product and make the tooling. These are then given to a moulder who gives us the plastic components. We buy all the other parts and assemble it in our factory. We did this till 2004-05 and then we felt that bringing all the components to our plant wasn’t very efficient—we weren’t adding a lot of value in the plant. We decided to assemble the parts where they are moulded. We asked our moulders to come close to our plant.

Now we have eight-nine moulders who mould and assemble the coolers. Our people do quality control. Our only investment is in the moulds and dyes. As of now, the gross capital block in our company, which has a turnover of Rs 300 crore, is just Rs 25-30 crore.

We’ve come a long way since our BIFR days. Today, at Rs 300 crore, we are the world’s largest air cooling company. Our stock price rose from under a rupee to Rs 1,672 before we announced a stock split. Our market cap stands at Rs 800 crore. Even today when we meet people from the markets, they ask me why I don’t get into other categories. But this time history is not going to repeat itself.

After all, the penetration of cooling devices [excluding fans] in Indian homes is 3 percent. Fifteen years ago it was half a percent. In China it has grown from 3 to 51 percent in the same period. Imagine the upside if we can grow to even a fraction of that. We have only seeded the market!

Tweets by @forbesindia
Romi Bhatia: We don't have a Donor-beneficiary relationship with India
Tara D Sonenshine: Like to see more American students in India