Back from the underworld: Greek city's cultural rebirth 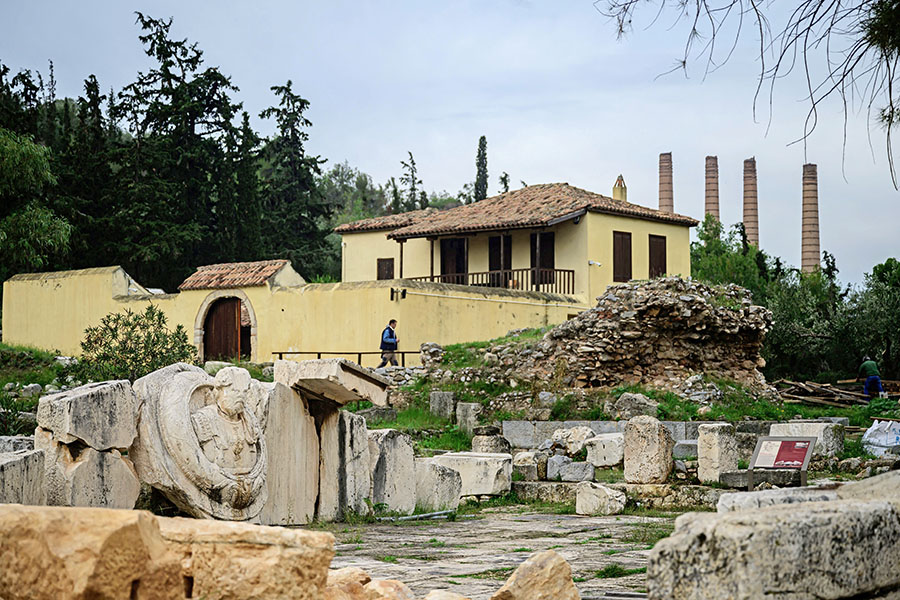 It was the Greek city where the ancients flocked in the hope of learning the secret of life after death. Now Eleusis — known to Greeks as Elefsina — aims to resurrect its flagging fortunes by becoming European capital of culture next year.

Roman emperors including Marcus Aurelius and his son Commodus — of "Gladiator" fame — were among the glitterati of antiquity who came to be initiated into its secret death-defying cult based around Persephone, the queen of the netherworld.

But Eleusis long ago lost its glamour.

Its grim factories, steelmills, refineries and ship and breaker yards drew thousands fleeing the poverty of rural Greece over the last century.

Choked by smog and pollution, its bay a vast ships' graveyard, for decades it resembled a modern version of the underworld from which Persephone escaped.

Her rebirth each year with the spring was recreated in the secret ancient rites of the Eleusinian Mysteries.

Local leaders hope becoming a European city of culture will do the same trick for the post-industrial city half an hour northwest of Athens.

Eleusis 2023 CEO Nana Spyropoulou said they had faith that a small "but historically significant city can draw the international and European cultural spotlight.

"Our goal is to make use of Elefsina's cultural wealth, and to leave a legacy for the future," she told reporters.

Dance, concerts, street art, films and exhibitions will draw on the city's fabled history and its long experience with unemployment, immigration and environmental degradation.Also read: In Istanbul's private retreats of the Sultans, time stands still

Many locals are descended from ethnic Greeks forced from their homes in Turkey in the wake of the disastrous Greek invasion of Asia Minor after World War I.

The refugee legacy continues still, with a large camp there sheltering Ukrainians fleeing the Russian invasion.

Several derelict buildings have been repurposed for the 25-million euro ($26.5-million) event, including a former olive oil mill which is becoming an archaeological museum, and an old bowling alley a conference hall.

Thanks to being a capital of culture, Elefsina has gained use of "infrastructure it never had before", said mayor Argiris Economou.

"(This is) a great legacy and an opportunity to upgrade the city," Economou said.

For some 12 centuries Eleusis was one of the most important religious centres of both the ancient Greek and Roman worlds.

The birthplace of ancient Greek tragedian Aeschylus, its mysterious rites centred on Demeter, the goddess of agriculture and fertility, and her daughter, Persephone, wife of Hades and queen of the underworld.

In a large hall that could seat up to 3,000 people, participants at nocturnal torchlit ceremonies were told of the endless cycle of life and death, and attended a re-enactment of the myth of Persephone, archaeologists say.

"It was kind of a psychotherapy to deal with the fear of death," Efi Anesti, an archaeologist at the sprawling Greco-Roman sanctuary where the mysteries took place, told AFP.

To enforce secrecy, "anyone who revealed the details was supposed to suffer the wrath of the gods," she said.

But the city went into a long decline following the abolition of the sanctuary by the Byzantines in the fourth century.

Elefsina shares the 2023 city of culture title with Timisoara in Romania and Veszprem in Hungary.

A Belgian artist collective called TimeCircus has already embarked on a 3,000-kilometre pilgrimage on foot that will connect the three cities.

Since 1985 more than 60 European cities including Istanbul have hosted the initiative, which aims to regenerate cities, highlight cultural diversity and boost tourism.

Tweets by @forbesindia
Sequins, velvet and feathers take centre stage for the party season
Our top reads of the week