One in three of the world's 2,000 largest public corporations have now set goals to become carbon neutral or emissions-free by mid-century or sooner. But with such self-set deadlines and varying definitions of what going "net-zero" actually means for a company, greenwashing is on the rise 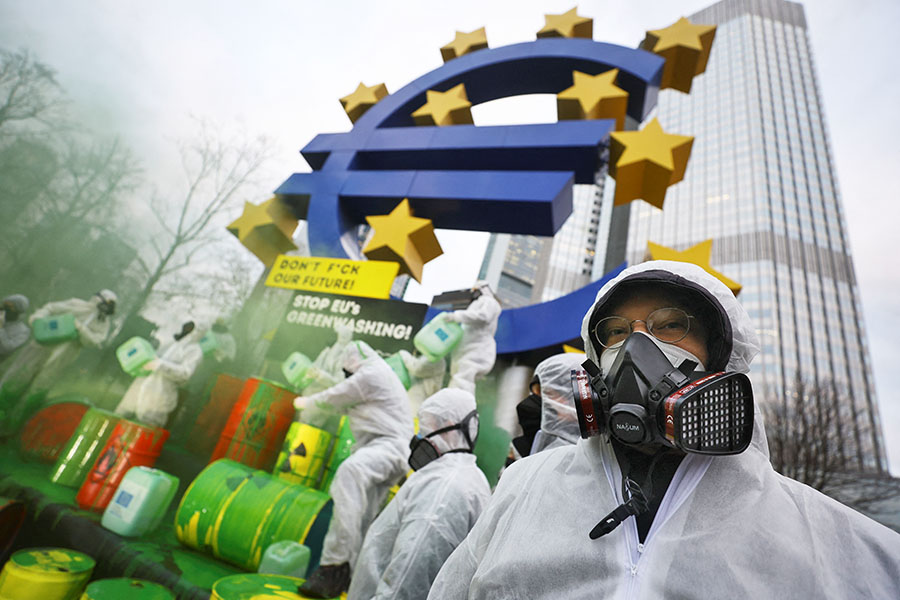 A file photo of demonstrators take part in a protest against the greenwashing of nuclear energy and gas through the taxonomy of the EU in front of the Euro sign in Frankfurt, Germany, in early January, 2022. Image: Kai Pfaffenbach / Reuters

Paris, France: Companies have been calculating their carbon footprints since the early 2000s and just over one in three of the world's 2,000 largest public corporations have now set goals to become carbon neutral or emissions-free by mid-century or sooner.
Even Saudi Aramco—the world's biggest oil major—has pledged to achieve "operational net-zero" carbon emissions by 2050, just days before the United Nations climate summit last year.
But with such self-set deadlines still a long way off and varying definitions of what going "net-zero" actually means for a company, there is currently no global uniform standard for how businesses disclose their carbon emissions.

Indeed, many companies have been accused of "greenwashing"—or simply making public pledges that are not matched by their actual climate-related actions.
"Greenwashing is growing and it will continue to grow as long as there are no standards that clarify who does what exactly," said Emmanuel Faber, head of the International Sustainability Standards Board, set up last year and tasked with drafting a universal climate reporting standard for companies.
According to the NGO Carbon Market Watch, a number of multinationals only disclose a tiny fraction of their overall emissions.
It said that Saudi Aramco resorted to the widely used trick of promising to reach net-zero only for its "operational" carbon emissions.
That essentially means greenhouse gas emissions that are produced directly by the industrial sites it owns, but not the vast majority of "indirect" CO2 emissions produced by burning the oil it sells to clients, in their cars, power plants and furnaces.
Aramco told AFP it was reporting its emissions "in line with the GHG Protocol" and was investing in low carbon technologies for its clients.
Also read: Most automakers fall short on climate goals: report
The GHG protocol—drawn up by a US-based NGO and a group of major companies—is a way for companies to measure the greenhouse gas emissions of their factories, offices, suppliers, employees and clients.
But it is not all-encompassing and companies are not obliged to use it, making it difficult to accurately compare their overall carbon footprints.

For Thomas Koch Blank, an expert at the Rocky Mountain Institute, greenwashing has become "blatant" at some companies.
But even for well-intentioned firms, the absence of rules as strict as those used in financial accounting leaves ample room for arbitrary interpretation.
It was not until 2021 that efforts to harmonise standards really began to accelerate, said Peter Paul van de Wijs, from the Global Reporting Initiative, an Amsterdam-based body that has been developing environmental and social standards since 2000.
The most ambitious efforts have been undertaken by the European Union, where the European Financial Reporting Advisory Group is drawing up environmental and social standards that 50,000 companies will have to respect from 2024.
The US financial watchdog, the Securities and Exchange Commission, also surprised everyone by publishing stringent draft rules on how much emissions listed companies will have to disclose.
The EU, the United States, the G20 and other countries support—or are in discussions with—Faber's International Sustainability Standards Board initiative, which was set up by the body that manages International Financial Reporting Standards.
Also read: Mitigation of climate change at the core of IPCC's 6th Assessment Report
These accounting rules—intended to make the financial statements of public companies consistent, transparent and easily comparable—are used in 120 countries.
"There won't be any other window like the next 12 months, when Europe, the United States... and other jurisdictions are simultaneously laying the foundations for this," Faber told AFP.
Once mandatory standards are in place, all companies worldwide will be obliged to tell the truth about their carbon footprints and their plans to reduce emission, or else face penalties.
Environmental lies will, in theory at least, become easier to detect.

There is still a problem—how to believe companies that promise "net-zero" by a specific deadline, whether that be in a few years' time or else as far away as 2050.
Two NGOs, the World Resources Institute and the CDP, have been central in setting up the Science-Based Targets initiative, which has become the dominant scheme for checking that these commitments are actually based on science.
For a few years now, companies that can prove they have a rigorous and genuine strategy to reduce their emissions have been applying for certification from the SBT.
After a period in start-up mode, the scheme is scaling up and tightening its criteria for obtaining this stamp of respectability.
Also read: What will it cost India and the world to reach net zero greenhouse emissions?
The head of the SBT initiative, Luiz Amaral, also believes in the importance of having a common set of strict rules for everyone.
"Without standardisation (and) transparency in accountability, it is going to be a storytelling competition and that is not going to solve the problem," he said.
That's another way of saying that standards can change the world.
By Ivan Couronne
© Agence France-Presse

Tweets by @forbesindia
How 'Barbiecore' is bringing gender extremes back to the forefront of fashion
Eating out: Service charge mandatory or optional? The debate continues