The number is based on death certificates and other official records. But given how many diagnoses were probably missed in the spring of 2020, when testing was in short supply, and a lack of official guidance about reporting these records, that is certainly an undercount

By Adeel Hassan and Sarah Cahalan 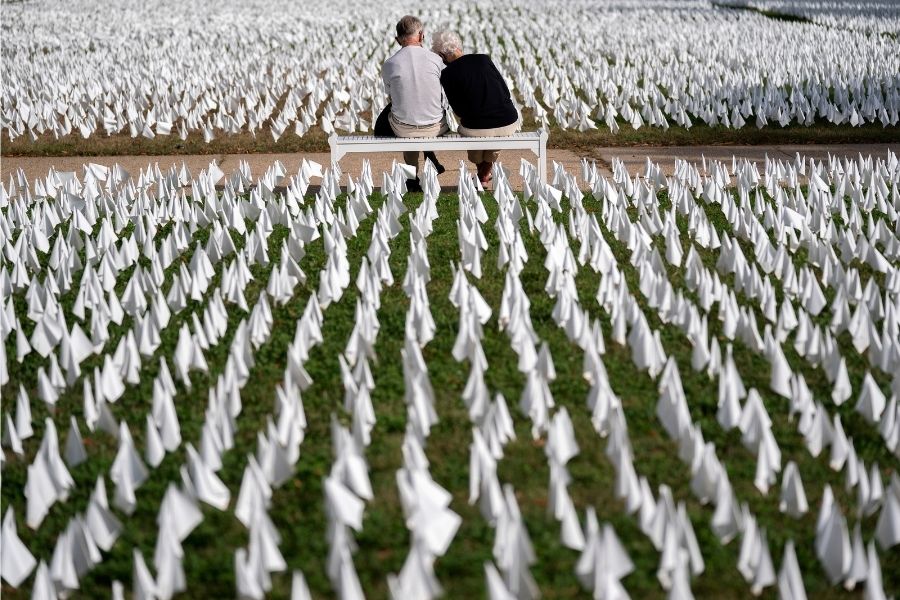 Flags representing those who have died of the coronavirus in the U.S. on the D.C. Armory parade grounds in Washington, Oct. 24, 2020. It’s difficult to comprehend and convey the toll of the coronavirus pandemic, so it may not be surprising that there’s no single way that federal agencies, newsrooms or universities have arrived at such an immense number as one million known U.S. coronavirus deaths. Image: Stefani Reynolds/The New York Times

It’s difficult to comprehend and convey the toll of the coronavirus pandemic, so it may not be surprising that there is no single way that federal agencies, newsrooms or universities have arrived at such an immense number as 1 million known U.S. coronavirus deaths.
Even the White House has acknowledged that there was no consensus method for tallying coronavirus data.
When Jen Psaki, then the White House press secretary, was asked last week how the administration would recognize the milestone, she said in part that “we look at the CDC data and the Johns Hopkins data, and different news organizations evaluate it differently.” Two days later, President Joe Biden anticipated the moment at his second COVID-19 summit.
“We mark a tragic milestone here in the United States: 1 million Covid deaths, 1 million empty chairs around the family dinner table — each irreplaceable,” Biden told the summit, which was held virtually. That came more than a week after NBC News said the mark had been reached but before some other tallies, including that of The New York Times, had crossed the threshold.
The number is based on death certificates and other official records. But given how many diagnoses were probably missed in the spring of 2020, when testing was in short supply, and a lack of official guidance about reporting these records, that is certainly an undercount, experts say.
Fewer than 310 known daily deaths, on average as of Wednesday, are being reported in the U.S., according to data collected by the Times. At the height of the winter omicron surge, there were more than 2,600 deaths a day in the United States, according to the Times’ data, and in January 2021, the daily toll reached a U.S. peak of more than 3,300 a day.
Since the beginning of the pandemic, the Times has had a team of journalists who are dedicated to collecting and publishing national coronavirus data. The Times developed a system that combines computer software and manual reporting to compile a unique data set which sometimes yields figures that vary slightly from those compiled by others.
The crucial difference is in the combination of sources. Some news outlets draw their data exclusively from the Centers for Disease Control and Prevention or from Johns Hopkins University. But the Times uses a broad variety of data sets — from the federal government, state governments, and many local and regional health departments. These sources can vary in their counts of cases and deaths for particular areas at particular times. For example, the state of California releases new data in the morning, but Los Angeles County typically updates its data late in the day.
The Times’ system of data collection also enables the newsroom to set aside figures that appear to be unreliable. That policy helps explain why the Times’ national death count may differ from others.
A crucial consideration for counting deaths by county is how a death’s location is recorded. For example, several states such as Georgia and Tennessee include deaths of nonresidents in their state totals. The Times omits these deaths when possible to avoid double-counting deaths that occur away from the victim’s home county and might be reported in both places.
The Times considers that precaution an essential characteristic of its data set. But it means that some deaths may be omitted if their counties of residence are not clearly indicated, and as a result, the Times’ count may differ from others’ totals.
By any reckoning, though, the scale of the nation’s loss to the virus has been immense. In marking it last week, Biden said in a statement that the nation “must not grow numb to such sorrow.”

Tweets by @forbesindia
US launches $3.5 bn plan for CO2 capture, storage
A French designer has created an eco-friendly sneaker from seafood waste