Passengers sigh as Heathrow caps numbers to head off 'Airmageddon'

After two solid years of pandemic-induced staycations, travel has come roaring back in Europe. But the return has come with myriad problems as airports and airlines that let employees go during the pandemic are feeling the strain of meeting the recent surge in demand 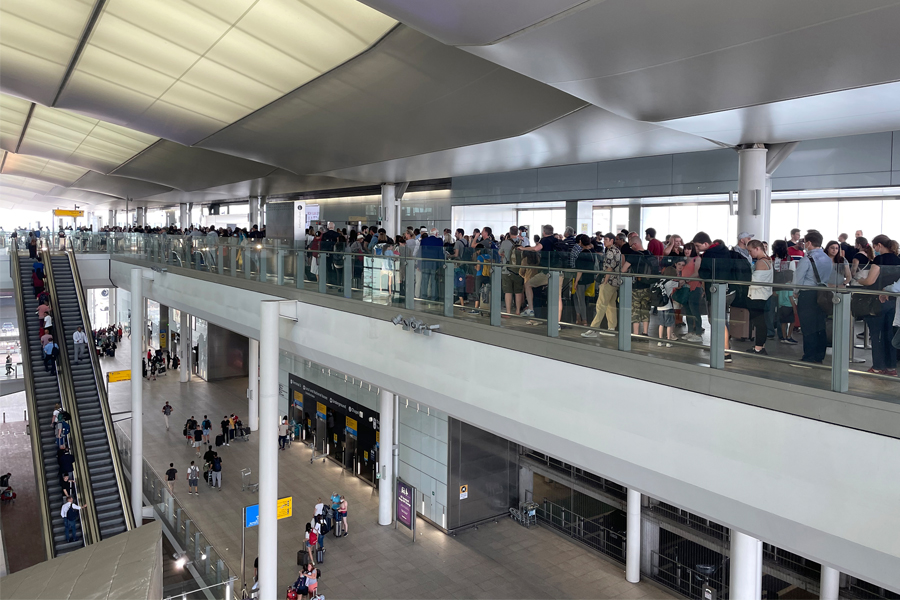 Long lines travelers at London’s Heathrow Airport on Thursday, July 14, 2022. After two years of pandemic-enforced staycations, demand for travel has come roaring back in Europe, and airports are finding it impossible to keep up. (Isabella Kwai/The New York Times)

HEATHROW — The travelers’ destinations were varied: a hotly anticipated vacation in Amsterdam, a conference in Ohio, a family reunion in Austria.

But to get there, travelers at Heathrow Airport, one of Europe’s busiest, had to navigate long lines, canceled or delayed flights, and crowds.

“I’ve never been through this situation,” said Fatima Bergamaschi, who slept in a terminal at the airport Wednesday after a canceled flight to Brazil from London left her family too tired to book a hotel room. “I love travel, but nowadays, not so much.”

After two solid years of pandemic-induced staycations, travel has come roaring back in Europe, and peak summer vacation season is in full swing. But the return has come with myriad problems as airports and airlines who let employees go during the pandemic are feeling the strain of meeting the recent surge in demand. Long waits to check bags and get through security and passport control have become the norm, with hundreds of flight cancellations reported across Europe.

In Britain, the situation has been exacerbated by the country’s departure from the European Union, which has made recruiting staff harder, and by strikes by aviation workers who say they are not being paid enough at a time of soaring inflation.

Last month, photographs of luggage piled up at Heathrow Airport circulated on social media, suggesting that arriving at Heathrow was not much better than departing, and this past week, Delta Air Lines said it flew a plane from the airport to Detroit just to deliver 1,000 pieces of stranded baggage.

To try to cope, Heathrow followed the lead of other airports, like Schiphol Airport in Amsterdam, and on Wednesday, it made the rare decision to cap departing passengers at 100,000 a day until September. To accomplish this, it asked airlines to stop selling tickets for summer flights.

The airport said that it had recruited new staff members but that disruptions to travel were from a mix of factors, including increasing passenger numbers, flight delays being passed on from other European airports, and a shortage of ground staff. The airport even reopened a terminal that had been closed for two years during the pandemic to deal with the number of flights leaving.

“Our objective is to protect flights for the vast majority of passengers at Heathrow this summer,” Heathrow’s CEO, John Holland-Kaye, said in an open letter to passengers.

Some airlines were critical of the cap. British Airways called it “incredibly disappointing news for our customers,” adding that it would have to reduce an already slimmed-down summer flight schedule. Virgin Atlantic said it supported the measure but looked forward to a plan to return flying to its regular schedule. Emirates, however, expressed its discontent more directly, saying that Heathrow, “now faced with an ‘airmageddon’ situation due to their incompetence and nonaction,” was pushing “the entire burden — of costs and the scramble to sort the mess — to airlines and travelers.”

Forewarned by reports circulating on social media about hourslong lines and grim accounts from returning friends and colleagues, many passengers Wednesday turned up at least three hours before their flights, steeling themselves.

But the sight of lines for security stretching outside the terminals still took some passengers by surprise. Outside one terminal, airport employees made announcements using a bullhorn — calling out the names of flights leaving within the hour and holding up signs signaling where passengers should start lining up. It was a blistering day by London standards, and airport workers handed out cans of water to those in line.

“We’ve never seen something like this at Heathrow before,” said Poly Bradshaw, who was shuffling through the security line for Terminal 3. But they had prepared for delays, said her father, Malcolm Bradshaw, adding that everything seemed well organized. “It’s not as though we’re in a rugby scrum.”

But other passengers said that long waits and flight delays had put them off traveling.

“I know they were shut down for a long period of time, but I think they could have planned better,” said Nicki Linke, who was waiting in a line to check in her luggage for a business trip to Cleveland — and wondering if she should have stuck with hand luggage.

Also read: 3 out of 4 Indian fliers are concerned about flight safety: Survey

She felt sympathy for ground-staff workers, she said, but the experience had only confirmed to her that she and her husband had made the right choice to avoid traveling this summer. “Maybe next year,” she said. “Definitely not this year.”

Past the security lines, which took about an hour at midday Wednesday, the crowds seemed to disperse, though the problems for some passengers did not stop there.

“If I can avoid travel and flying, I will,” said Eman Martin-Vignerte, who was waiting for a flight from London to Stuttgart, Germany, that already been canceled twice, forcing her to leave and return to the airport. The delays, she said, seemed “like a tsunami.”

“They really need to get the same level of staff as before COVID,” she said, adding that she hoped the mayhem was temporary.

Even in the travel industry, workers say this summer is remarkable.

“This is first time I’ve seen this situation,” said Tobi Kerstan, a pilot for Lufthansa who was traveling to Germany from London. “It’s no longer fun to fly,” said Kerstan, who has flown for 25 years. Asked about Heathrow’s cap on departing passengers, he said he wondered how it would be enforced. “Is anyone counting the people?” he said, gesturing around at other passengers. “I would say it’s a guess.”

Low pay for ground staff working for airlines was a problem, he said, adding that a common cause of flight delays at the moment was the tight timelines for airline workers to board passengers, unload bags, refuel and clean the plane. “You are creating a never-ending problem.”

Some passengers did try to find a bright side, like being able to fly without the COVID tests required in many countries until recently.

“This is pretty easy in comparison,” Poly Bradshaw said. “It is the summer holidays. It’s just circumstance still living with COVID.