Hydrogen-powered planes are already aloft, although mostly as small, experimental aircraft and could pave the way for net-zero carbon aviation by 2050, the goal set by many government and environmental groups 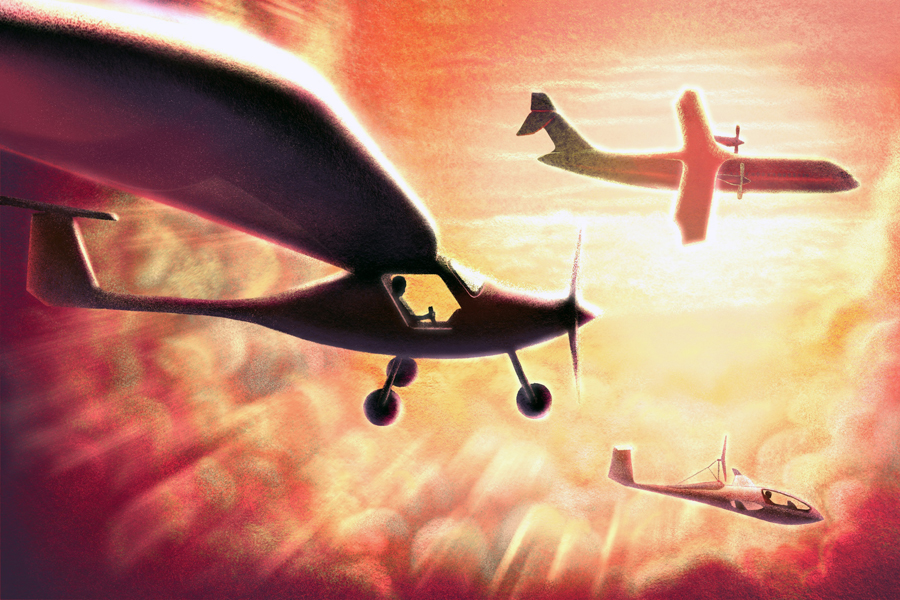 Small, experimental hydrogen-powered planes are paving the way for net-zero carbon aviation by 2050. But the route is rocky. (Matt Williams/The New York Times)

A fully fueled Boeing 787-10 Dreamliner can fly roughly 8,000 miles while ferrying 300 or so passengers and their luggage. A battery with the energy equivalent to that fuel would weigh about 6.6 million pounds. That’s why — despite environmental advantages — we don’t have battery-powered electric airliners.

But aviation companies working to make cleaner aircraft are exploring the use of hydrogen, the world’s most abundant element, to power both electric and combustion engines — and to make air travel more eco-friendly.

Hydrogen-powered planes are already aloft, although mostly as small, experimental aircraft. Yet those planes are helping to pave the way for net-zero carbon aviation by 2050, the goal set by many government and environmental groups. But hydrogen isn’t without controversy: For now, it’s expensive, not always green, and some say dangerous.

“There are three ways of using hydrogen as fuel onboard an aircraft,” said Amanda Simpson, who leads green initiatives for aircraft manufacturer Airbus. Hydrogen can be a source of power for batterylike fuel cells, in hybrid aircraft, or as combustible fuel.

Alternative-fuel technologies are well established in the automotive world, of course. Cars that burn alternative fuels — remember diesels converted to burn used french fry oil? — have been around since the earliest days of horseless carriages. And hybrid gas and electric cars, such as the Toyota Prius, have been available since 1997. But only a few models, including the Toyota Mirai and the Hyundai Nexo, use hydrogen fuel cells.

When Val Miftakhov founded ZeroAvia to develop electric aircraft, he first considered battery power. A Siberian émigré and physicist, his earlier startup converted gasoline cars to electric, then incorporated an improved charging system. But batteries can sustain only the shortest excursions, like training flights.

“Where a mission is an hour, batteries might work,” he said. Battery-powered trainers also exist, such as the Pipistrel Alfa Electro, which claims a one-hour flight time.

ZeroAvia instead chose fuel cells, which are essentially a chemical battery that substitutes lighter-than-air hydrogen for the weighty lithium ion. Hydrogen is notable for its energy density — the amount of energy per kilogram — which is about three times that of jet fuel. The byproduct of burning hydrogen is water. Hydrogen can be made from water and renewable energy, although most is now made from natural gas, which is not particularly green.

Miftakhov acknowledged that hydrogen storage containers, which were generally designed for ground transportation, were not practical for aircraft.

“We need to focus on reducing the weight,” he said. “We have some fairly low-hanging fruit.”

Unlike electric batteries, hydrogen fuel cells can be recharged in minutes, but there is a lack of fueling stations, and building them would be a huge undertaking.

That problem is less critical for hybrid aircraft, which use a combination of electric and combustion power, said Pat Anderson, a professor of aerospace engineering at Embry-Riddle Aeronautical University in Florida.

“It can pull up to a fuel pump that exists today and fill up,” he said.

Anderson’s students used a hybrid system in a 2011 eco-flight competition. They didn’t win, but it sold Anderson on the merits of hybrid power engines, which he now builds at VerdeGo Aero, a Florida company that counts Erik Lindbergh, an X-Prize Foundation board member and Charles Lindbergh’s grandson, as executive chairman.

Modern hybrid systems can use a variable mix of electric and combustion power, and can even use the combustion motor as an electric generator in flight. It may give planes more range than battery or fuel cells alone, Anderson said.

Whatever the power source, there are some advantages specific to electric engines, said Roei Ganzarski, who leads two companies: MagniX, which makes electric propulsion systems for aircraft, and Eviation, which is developing the futuristic-looking Alice electric aircraft. One advantage is cost.

“Airplanes today are really, really expensive, and the main reason is the engines,” he said. They require a lot of maintenance and consume a lot of expensive fuel.

“I can reduce the operating cost of that plane around 40 to 50% on average,” he said. That’s because electric motors are comparatively maintenance free.

Harbour Air, which bills itself as “the world’s largest seaplane airline,” is seeking permission to carry passengers on its MagniX electric-powered de Havilland dhc-2 Beaver. A 10-passenger Cessna Grand has also flown with a MagniX engine.

There are some things electric power cannot achieve, like lifting that 787. But that doesn’t mean big jets can’t go green or at least greener. Several fuel refiners and airlines are experimenting with sustainable aviation fuels, known as SAFs. These fuels, which burn just like the common “Jet A” fuel, can be made from waste such as used cooking fats. Some companies, like Neste, use hydrogen in refining its SAF fuel.

Although aviation safety organizations allow commercial aircraft to use fuel containing 50% or less SAF, in demonstrations, existing jets have burned 100% SAF, “and the engines are very happy with it,” Simpson of Airbus said.

Any mention of hydrogen aircraft means addressing the zeppelin in the room. Although hydrogen has been used in ballooning since 1783, its aeronautical future dimmed May 6, 1937, when the Hindenburg very publicly burned in Lakehurst, New Jersey, killing 36. It is still debated if the flames, immortalized on radio and in newsreels (and a Led Zeppelin album cover), were caused mostly by hydrogen or the incendiary paint used on the airship’s fabric skin. Regardless, the damage to hydrogen’s reputation lingers today.

Hydrogen boosters like Ganzarski argue that while green hydrogen may initially be costly to make, the cost of not pursuing hydrogen aircraft may be greater. It is with some understatement that he said, “Emissions are not good for our health.”

Tweets by @forbesindia
Small to Mall: How CarDekho is giving a new-car experience to used-vehicle buyers
Wall street is finally getting access to China. But for how long?