Small to Mall: How CarDekho is giving a new-car experience to used-vehicle buyers

The recently-minted autotech unicorn has opened India's biggest used-car mall in Jaipur and plans to replicate more such outlets across India. Can its offline gambit pay off? 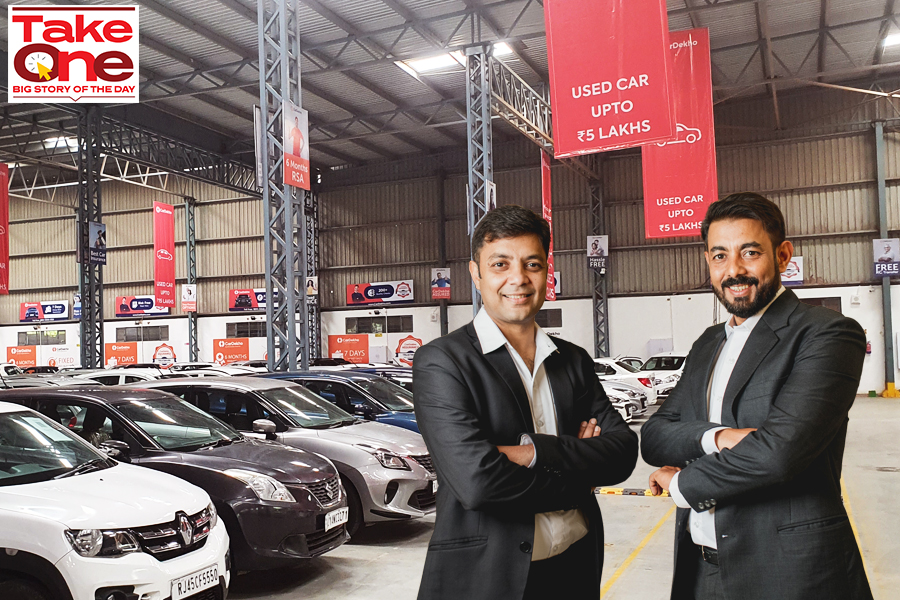 In early November, when Ramesh Gupta decided to buy a used car, he didn’t think small. “I was curious to see how it is like to buy from a mall,” says the kirana owner in Jaipur. “I wanted to explore options.” The 40-year-old travelled 15 kilometres from his home to reach a sprawling 40,000 square feet facility located at Poddar Circle in Sitapura industrial area of Jaipur, Rajasthan. The mall had some 500 used cars of all shapes and sizes—small, sedan, compact SUVs, hatchbacks—neatly parked, spruced and ready for sale.

If Gupta was dazzled by the massive fleet on display, he was set to be astonished by a bunch of enticing offers. The salesman at the mall started dangling the carrots, one by one. The first selling hook was a seven-day ‘no questions asked’ money-back guarantee. Then came six months of comprehensive warranty on the engine and all parts. It was followed by a year of free roadside assistance cover, seamless paperwork in a few minutes, hassle free transfer of RC (registration certificate) and free service. All the cars, the salesman stressed, have undergone a 217 point-evaluation process which includes checks on ownership, challan and accident history, and odometer tampering. “We also provide finance and insurance,” he sweetened his pitch.

Gupta was floored. “Local dealer se khareedna bekaar hai (It’s useless buying from a local car dealer),” he says, as he drove away in a Hyundai i20. The salesman, too, was excited to have one more delighted customer buying from CarDekho Mall, which was opened in the last week of October. “They are not used to such experience in buying a used car,” he says. 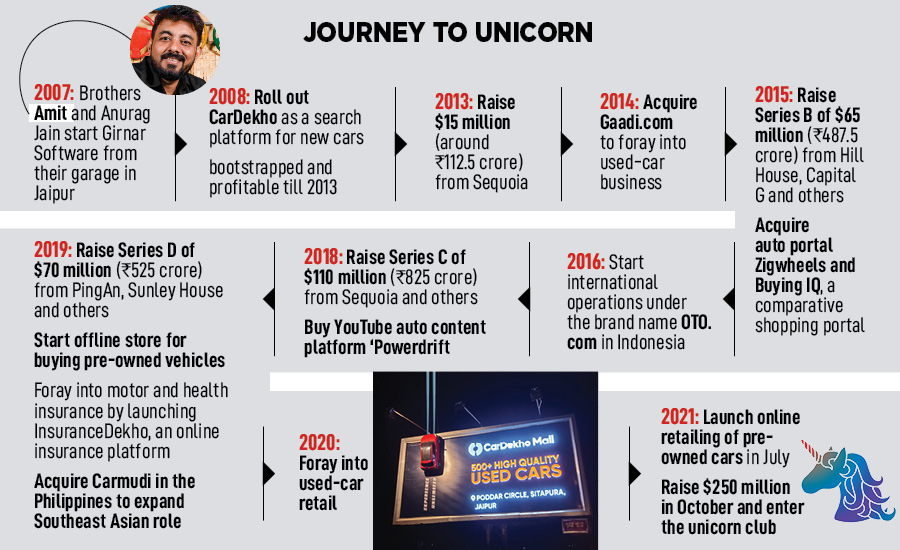 Around nine kilometres from the mall, Amit Jain explains why a mall for pre-owned cars makes ample business sense. The most crucial thing missing in a used-car transaction, underlines the co-founder of recently-minted autotech unicorn CarDekho, is trust. Consumers have to grapple with scanty options, abject quality, deflated prices for selling and an inflated tag while buying vehicles. “We want to change the playbook by providing exceptional experience in choice, quality and trust,” he says. CarDekho plans to roll out 30 to 40 malls across top cities and Tier II towns over the next 18 months. The idea is to give a new-car experience to a used-car buyer. The company is about to open refurbishment centres across the country, and get into service of the cars.

Jain’s game plan is simple: To double down on the used-car business. “If you want to cut a cake, you need to go deep,” he says. From buying, selling and servicing of used cars to financing, insurance and selling of accessories, Jain wants customer stickiness by being the one-point place during the entire journey of a used car. “The magic,” he underlines, “lies in going deep.”

The cake that Jain is eyeing is not only creamy, but also huge. The used-car market in India is estimated to touch over 70 lakh vehicles by 2025-26, up from 38 lakh in 2020-21, according to a latest study. The pre-owned car industry is set to grow at a rate of around 15 percent in FY22 on the back of pandemic tailwinds, booming digitalisation, changing demographics and aspirations, first-time buyers, and availability of financing, points out an OLX Autos-CRISIL study conducted in October. The share of the organised player is likely to increase from 20 to 30 percent over the next five years.

Jain, for his part, wants to have a huge slice of the used-car cake. “Think of us as the OEM (original equipment manufacturer) of used cars now,” says Jain, who started a small software firm along with brother Anurag from a garage back in 2007. A year later, the brothers rolled out CarDekho, which started as a search platform for new cars, and stayed bootstrapped and profitable till 2013. 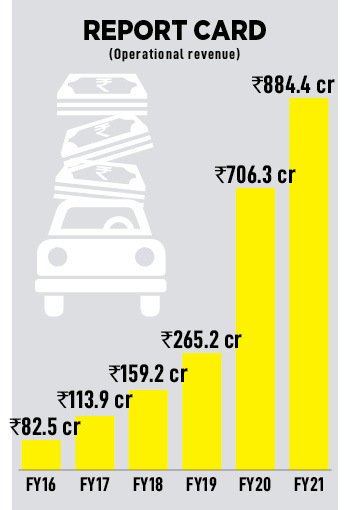 Eight years later, Jain reckons the timing is right to step on the gas. The reasons are many. First, the company has grown at a fast clip. The operating revenue has jumped from Rs82.5 crore in FY16 to a staggering Rs884.4 crore in FY21. Second, the new car and finance business are profitable, the insurance vertical is at a breakeven point, and the international operations in Indonesia and Philippines have taken off. Third, the company is planning to get listed in 18 months. Jain wants to keep his foot on the accelerator. “We have found the right place, it’s an exciting time and we have to play it right,” he says.

Its backers, meanwhile, are equally excited with Jain’s ‘small to mall’ game. LeapFrog Investments, the global impact investor focussed on financial services and health care access, decodes why CarDekho is best placed to make a splash and huge impact in India and Southeast Asian markets.

Overall, CarDekho’s products and services reach 3.6 million emerging consumers (those with a monthly household income of less than $600, which is around Rs45,000), underlines LeapFrog in its report, explaining its investment thesis behind backing CarDekho. The investor led the unicorn round of funding in CarDekho last month, alongside Canyon Partners, Mirae Asset, Harbor Spring Capital and existing investors such as Sequoia Capital India and Sunley House. The $250-million round pole-vaulted CarDekho into the unicorn club with a $1.2 billion valuation.

LeapFrog is betting big on CarDekho’s bigger play. Out of 3.6 million users, LeapFrog points out, a majority purchase vehicle insurance (3.3 million), but there is an increasing segment seeking used vehicles and used vehicle finance. An average used-car buyer on CarDekho earns a relatively small salary or runs a small business and may not have a fully documented recurring source of income, points out the report. Three quarters of those who accessed used-car finance through CarDekho earn less than $10,000 per year, adding that the low-income consumers are dramatically under-served. Look at the figures. While used-car loan penetration in India is around 17 percent, it is 75 percent in developed markets. 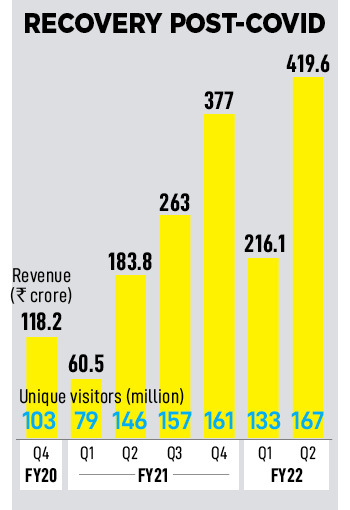 The headroom for growth, clearly, is massive. CarDekho, points out Stewart Langdon, partner at LeapFrog, will be an important platform in enabling India’s transition to electric vehicles. In Q1 FY22, there were 3.3 million searches for EVs (electric vehicles) on CarDekho’s sites. India, he reckons, is on the cusp of making EVs affordable, with a range of domestic manufacturers launching affordable EVs in a revolution similar to the proliferation of cheap petrol cars a decade ago. It is important to help CarDekho grow its reach into the emerging consumer segment, through improved delivery of its finance and insurance products, while also support the company to aggressively expand low-emission vehicle sales across emerging Asia, he adds.
The big, bold offline bet, though, has a huge flipside. Jain is aware of the challenges. “It’s easy to buy cars but hard to sell,” admits Jain, adding that it’s easy to buy a car for Rs100 and sell it for Rs90. But selling it for Rs120 is where the game lies. CarDekho, he points out, is making a transition from being largely an online player to an offline business, which changes the nature of the game in two ways. First, from an asset-light model CarDekho is going deep into the asset-heavy business. What this means is buying used cars, which will weigh not on its books but might drag the bottom line. For FY20, the losses reportedly surged to Rs326.4 crore from Rs127.9 crore in the previous fiscal. The company's losses for FY21 were at Rs332.5 crore. Second, an offline business—selling through malls—also means learning new ways of delighting consumers. “We are changing our DNA. A field company is quite different from an online company,” he says. 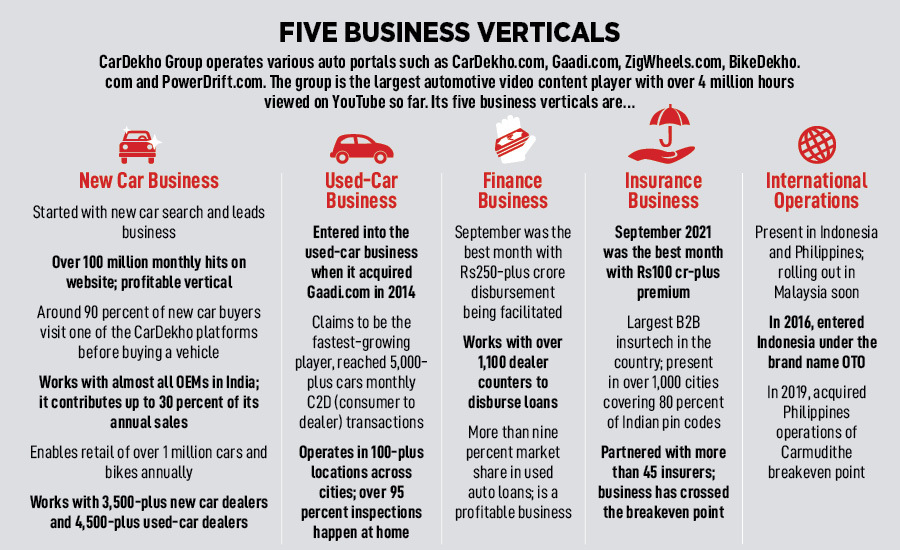 Jain, though, reckons that in spite of the operational heavy nature of the offline business, CarDekho is placed on a sound footing. Reason: The company stayed bootstrapped for the first eight years, and knows the value of keeping a firm eye on the bottom line. “We are more focussed on unit economics as opposed to others,” he says, alluding to low marketing and advertising expenses incurred by the company. The expansive offline bet, he underlines, is not going to change the fiscal DNA much. “We are not going out guns blazing,” he says, claiming that the company is well placed to grow even without an additional round of funding. “My comfort as a founder is that one should have at least three years’ money in the bank,” he smiles. CarDekho, he underlines, will keep growing in a sedate manner. “We will go for an IPO as a sustainable company,” he says. “It’s still Day 1 for us, and we are going on a log and deep ride.”