How to put EVs on the fast track 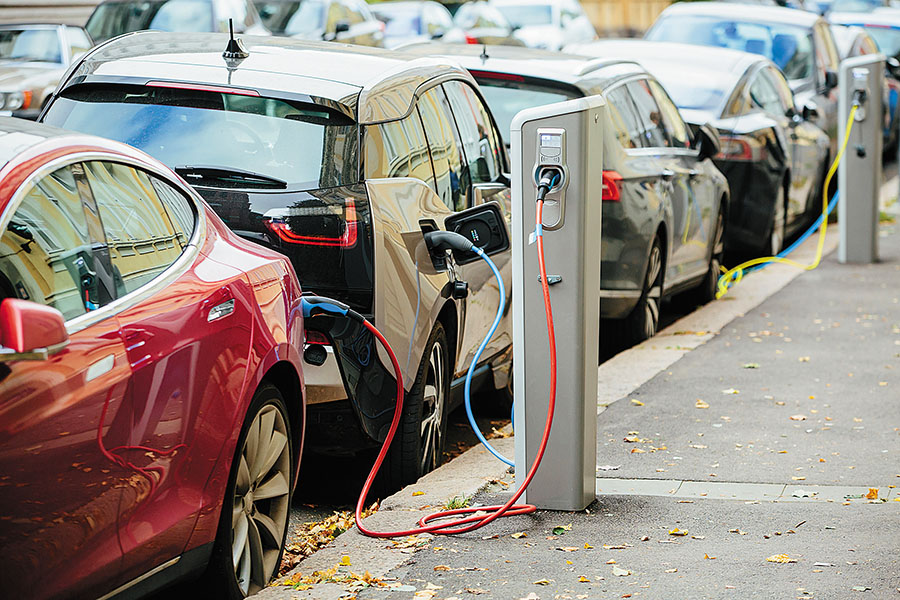 “Electric vehicles (EV) are deemed to be the sunrise sector of the automobile industry as they are solely responsible for the sector’s impending transformation into a renewable alternative over fossil-fuel-dependent vehicles,” says Akhil Aryan, founder of Ion Energy in Mumbai. “India has shown considerable progress in the EV space with serious players spearheading numerous initiatives to promote EV adoption.”

Ion Energy builds battery management technologies and an analytics platform that can assess an EV’s performance based on data being fed into it. By exploiting software analytics, machine learning, and artificial intelligence, Ion can improve performance and extend the life of lithium-ion batteries by up to 40 percent, the company claims. The analytics software makes sense of battery data to provide insights that can ensure zero downtime and reduce the overall ownership cost.

In Bengaluru, Yulu Bikes co-founder Amit Gupta says he is solving the ‘chicken-and-egg’ problem faced by the ecosystem in India, where the lack of charging infrastructure influences the adoption of EVs. Yulu has created a battery-swapping network by placing its proprietary Internet of Things-enabled charging box, called Yulu Max, at many mom-n-pop stores near locations where it operates mainly in Bengaluru. Yulu’s on-the-ground operations team is able to locate the nearest Yulu Max through a dedicated app. The same app shows the set of vehicles that have a battery-charge level below a defined threshold along with their real-time location. This method is low cost and highly scalable, Gupta says.

Companies such as Ion Energy, Lohum and Yulu Bikes are part of India’s nascent EV infrastructure ecosystem. The government’s push to enable faster EV adoption through subsidies and tax benefits is expected to propel the growth of the sector. For instance, the Indian government plans to spend ₹10,000 crore under the Phase II of its plan, Faster Adoption and Manufacturing of (Hybrid &) Electric Vehicles or FAME-II, over a period of three years through March 2022. 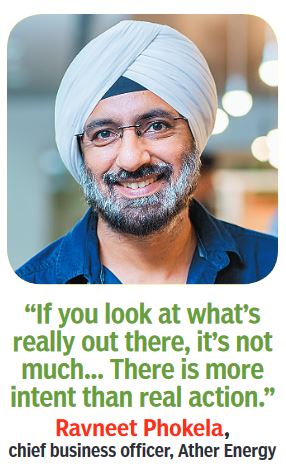 The BS VI rules, which have more stringent emission standards for fossil-fuel burning vehicles, will become applicable from April 2020. BS VI-compliant vehicles are expected to be costlier, which will help reduce the price gap with the more expensive EVs. The government’s plan to raise the proportion of EVs to 30 percent by 2030 will also provide impetus to the sector. NITI Aayog, the government think tank, has stated that India’s fuel imports, which account for 80 percent of the country’s import bill, can be reduced by $60 billion by 2030, through adoption of EVs.

The EV market stands to grow at a CAGR of 43 percent from 2019 to 2030, according to BIS Research, a market intelligence, advisory and research firm. The charging infrastructure installation is projected to grow at a CAGR of 42 percent, and the EV battery market at 60 percent. Alongside battery imports, local battery manufacturers such as Tata Chemicals and BHEL will also likely be present in the market.

With India’s choked cities, especially the metros, solutions are needed to transport citizens in an eco-friendly way and hence the potential for shared e-micro-mobility is high. EV adoption is likely to take place across vehicle segments. However, unlike China, Europe, and the US, India has a very low penetration of cars.

In terms of adoption in the country, two-wheeler fleets and three-wheelers would be the first off the block, followed by intra-city buses, corporate taxis, and government fleets. Two-wheelers are expected to be one of the early adopters of electrification due to low cost, high vehicle utilisation, access to easy finance, powered by home or workplace charging options (currently limited, but evolving).

Two-wheeler fleets will also grow through the efforts of companies such as Drivezy, a bike-rental provider, based in Bengaluru. “Following our recent Series C fund raise, we shall commence listing EVs in Bengaluru and Hyderabad,” says co-founder and CEO Ashwarya Singh. Eventually, Drivezy intends to enter markets like Mumbai, Delhi and Pune, which do not permit the rental of petrol-powered two-wheelers. The company will bring in 5,000 electric two-wheelers in the next three years, Singh says.

Currently Drivezy has a network of more than 250 parking locations which it will tap to establish public charging and battery swapping infrastructure, he says. What’s missing
A key differentiator between advanced markets and India is the speed-to-market in implementing vital infrastructure. Therefore, on one hand, the government’s push is helping create an EV mindset in the industry and among consumers. On the other, various components of the EV infrastructure ecosystem are missing in India.

To build a robust EV ecosystem, says Ion Energy’s Aryan, India needs enhanced manufacturing capability. Though the price of lithium batteries has reduced by almost 80 percent since 2010, the lead-to-lithium transition has not been beneficial to manufacturers. This is because India is dependent on expensive lithium imports, driving up the cost of production and subsequently the sale price of EVs.

The government also needs to formulate policies to encourage domestic manufacturing of battery cells that use battery chemistry to optimise cost and performance suited to Indian temperatures. About 80 percent of the battery cost is of the constituent cells in the pack. The government should set up its cell manufacturing facilities as it would decrease the cost as well as enhance the logistics efficiency by using reduced labour and utility rates to its advantage, says Aryan.

Encouraging companies such as Lohum will help as they are developing battery technologies locally. “Our focus is developing technology to accelerate EV adoption across price sensitive markets such as India by reducing costs throughout the life cycle of the battery,” says Lohum’s Verma.

When the battery reaches its end of lifecycle, Lohum’s material extraction technology recycles the full cathode (lithium, cobalt, nickel, manganese, etc) and anode (graphite) to create individual oxides or sulfates that are used for new batteries.

The company says it is a global technology leader in each of these technologies.  And, due to its downstream technologies, it is able to produce first-life battery packs with the lowest price point because it can generate additional revenues after the battery packs’ initial use.

The industry is also facing a dearth of qualified talent as EV technology will need an amalgamation of more mechanical, chemical, electric, electronic and material sciences engineers. Currently, there are only about 1,000-odd engineers as opposed to the current demand pegged at 5,000 and likely to escalate to 15,000 in the next couple of years.

The ministry of human resources will also need to include EV-specific courses at the university level as Indian higher education in these areas lags by over a decade.

Besides, there are three major challenges to setting up charging infrastructure: Lack of access to land, electricity load connection, and capital. As per Bloomberg New Energy Finance, India had an estimated 650 charging stations for cars and SUVs in 2018. Whereas the largest EV market, China, has about 456,000 charging points. In addition to charging points, the lack of private parking spaces is also noted as a hindrance for EV adoption, and the lack of affordable renewable energy means charging EVs is further stressing out the coal-powered electricity grid.

Earlier this year, India approved setting up of 2,636 EV charging stations across 62 cities under FAME-II. 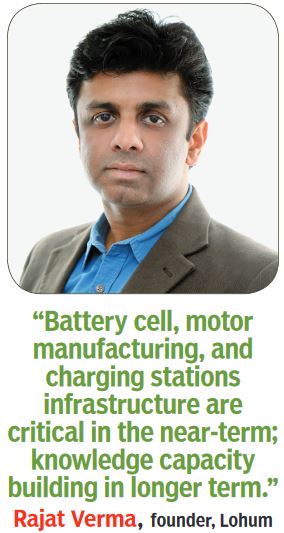 Top Challenges
With these missing components in the background, there are several challenges in the way of India evolving as a mature EV market. “If you look at what’s really out there, it’s not much,” says Ravneet Phokela, chief business officer at Ather Energy in Bengaluru, which manufactures premium e-scooters. “There is more intent than real action.”

On one hand, there is a degree of standardisation of charging hardware when it comes to cars, but on the other, India’s car penetration, even for fossil-fuel-burning ones, is very low. “Two-wheelers will lead electrification in India,” Phokela says, but t here aren’t any standards today for charging hardware for two-wheelers. This could be a deterrent for private investment in setting up charging points.

Among other challenges is a need to reduce India’s dependence on battery imports, which in turn increases production cost. One way of promoting domestic manufacturing would be through providing incentives to such ventures.

Reducing the price of EVs to encourage a shift from traditional automobiles will increase adoption. Availability of more models as well as more automakers entering the space would make EVs more price-competitive.

There is an immediate need to enhance electricity supply in various parts of the country for EVs to be considered as an acceptable mode of transport. Maintenance and repair options available should be of high quality to ease worries. Revival of the overall automobile sector would lead to increase in demand of EVs.

Yulu also made some suggestions to the government at a recent government-industry meeting that focussed on the EV industry in the country. These included: Considering loan guarantee schemes and urging banks to lend to EV manufacturers and operators with parity on lending terms; a national policy for parking infrastructure for shared mobility; driving adoption through school buses that need small batteries, etc.

Gupta says there are lessons that can be learnt from what the Europeans have done: It is critical to have a policy that permits a pay-per-click or subscription model—a policy for ease of doing EV business. Create an apex body to monitor carbon emissions and incentivise start-ups or companies contributing towards the reduction of carbon emissions — this can be a special division under current organisations such as Society  of Indian Automobiles Manufacturers.

India also needs a national awareness campaign, Gupta says. Just as a campaign was run with the tag line “mutual funds sahi hai [mutual funds are right]” to encourage people to invest in them, a campaign that says “EV sahi hai [EV are right]” would go a long way in enabling adoption.