Experienced, foreign CEOs were initially required in a nascent aviation industry. But as the sector matures and grows, the trend has much to do with airlines' global ambitions 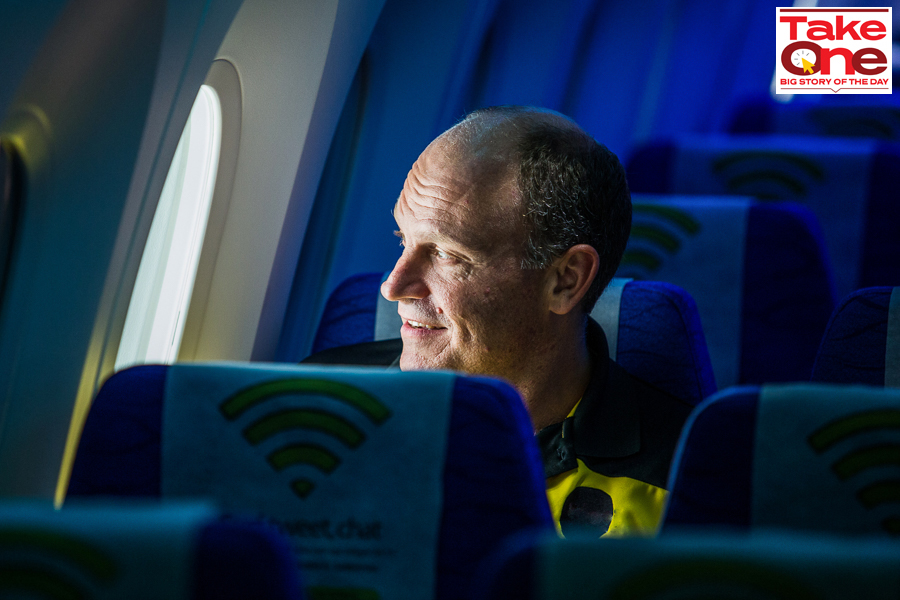 A file photo of Campbell Wilson inside a Boeing Co. 787 Dreamliner aircraft at Changi Airport in Singapore Image: Nicky Loh/Bloomberg via Getty Images

It’s been the case for many years. And there seems to be no end to it. Last month, India’s largest airline by market share, IndiGo, announced a replacement at its helm: Incumbent CEO Rono Dutta will retire by the end of September, and will be replaced by Pieter Elbers as the new CEO. Elbers, who has been serving as president and CEO of KLM Royal Dutch Airlines since 2014, will assume office on or before October 1, subject to approval.

Just a week before IndiGo’s announcement, Tata Sons, the new owners of Air India, announced that 50-year-old Campbell Wilson will lead the 90-year-old airline in its new avatar as a privately owned entity after many years of government ownership. The appointment of Campbell, who was earlier with Singapore Airlines, came a few months after another foreign CEO, Ilker Ayci, the former chairman of Turkish Airline, was appointed to the top post at Air India; Ayci eventually decided not to join Air India.

“He is an industry veteran having worked in key global markets cutting across multiple functions,” said N Chandrasekaran, chairman of Air India, at the time of the announcement. “I am delighted to welcome Campbell to Air India. Further, Air India would benefit from his added experience of having built an airline brand in Asia.”

These recent appointments to the helm of the country’s top airlines raises a significant question: Is there a shortage of Indian CEOs in the aviation sector, capable of driving growth? Consider this. It’s not just IndiGo and Air India—which together account for 64 percent of the domestic market—that have a foreign presence at the helm. GoFirst, earlier GoAir, has Ben Baldanza, a pioneer in the ultra-low-cost carrier (ULCC) model, having served as CEO of US-based airline Spirit for over a decade, as its vice chairman. Beldanza was appointed in March 2021 and has been instrumental in turning GoAir into a ULCC. (A ULCC, unlike a low-cost carrier, operates with unbundled fares, making it cheaper for customers, which means that apart from the seat, all other extras such as baggage, seat preference or food are subject to an additional fee.)

“If one peruses the long list of CEOs of Indian carriers ever since they were allowed to enter the business of flying, starting the early 1990s, most have been of foreign origin,” says Jitender Bhargava, a former executive director of Air India and author of The Descent of Air India. “The ones who have been or are of Indian origin are those who have acquired experience working with international airlines abroad.”

Take, for instance, Jet Airways, India’s oldest private airline that once was the country’s market leader. Between 2003 and 2009, it was run by Wolfgang Prock-Schauer, currently the president and CEO of InterGlobe. Prock-Schauer was followed by Nikos Kardassis between 2009 and 2013, who had also led the airline earlier between 1994 and 1999. Vistara had appointed Leslie Thng of Singapore Airlines as CEO in 2017. It was only in December 2021 that Vinod Kannan took over as CEO after Thng returned to Singapore Airlines. Vistara is a 51:49 joint venture airline between Tata Sons and Singapore Airlines.

“While foreigners may know more about aviation, the latest trends on technology and marketing, they have no knowledge of the Indian market,” adds Bhargava. “Tony Fernandes [head of Malaysia-based Air Asia], after being hugely successful in several Asian countries, failed to make a mark in India. Considering that Indian aviation is no longer a nascent industry but is growing at a phenomenal pace, must we keep relying on foreigners or expat Indians who have spent most of their life abroad to lead Indian carriers?” 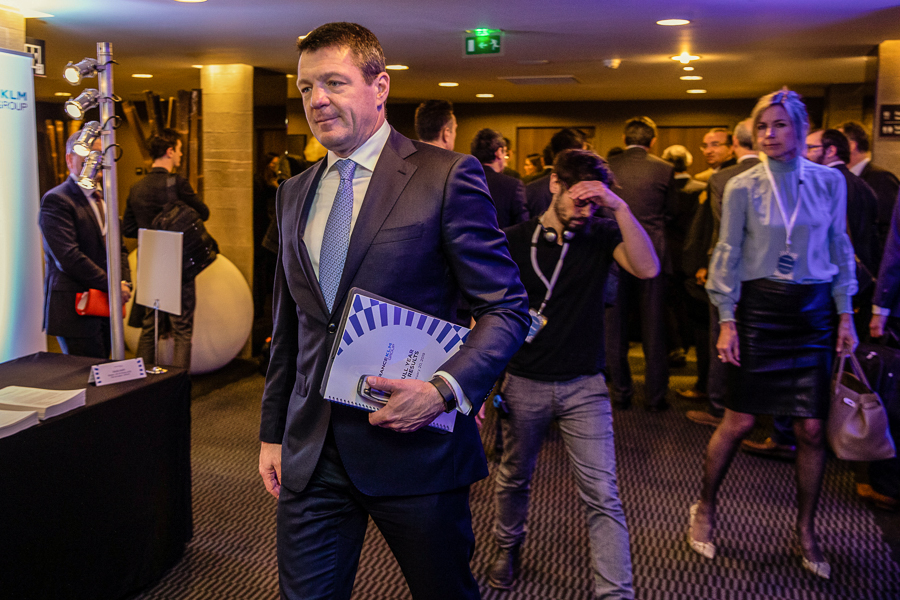 A file photo of Pieter Elbers arriving for a full-year earnings news conference in Paris, France during his tenure as CEO of the KLM division of Air France-KLM Group in February 2019. Image: Marlene Awaad/Bloomberg via Getty Images

While historically there have been reasons why CEOs of Indian airlines often came from outside the country, the recent trend has much to do with ambitions laid out by the airlines.

“IndiGo is looking at medium haul operations and they will certainly require someone who has the right expertise and exposure to Europe,” says Vinamra Longani, head of operations at Sarin & Co, a law firm specialising in aircraft leasing and finance. “In many cases it’s about finding the right person for the right job, and often its people from outside who have the expertise.”

Air India, Longani reckons, is in a transformative space, which means it needs someone at the helm who has had the right exposure to global standards and has the right experience in managing the union and dealing with government regulations. “Singapore Airlines is a world-class airline and the right exposure there will help Air India in future.”

The Indian government had recently sold Air India to the Tata Group after many years of dilly-dallying with the idea of selling the airline to a private player. Since coming to power in 2014, the Narendra Modi government had made multiple attempts to sell the airline to private companies, before managing to successfully complete it last October. As part of its bid, the Tata Group’s wholly owned subsidiary Talace Pvt Ltd put an enterprise value (EV) bid of Rs 18,000 crore with debt to be retained at Rs 15,300 crore and a cash component of Rs 2,700 crore. Tata’s bid was higher than the Ajay Singh-led consortia’s EV bid of Rs 15,100 crore. The Tatas took 100 percent control of Air India, the low-cost carrier Air India (AI) Express, and Air India’s 50 percent stake in ground handling firm AI-SATS.

India’s airline industry is in the midst of a churn, with the entry of new airlines even as older ones are looking to substantially improve their presence. Over the next month, India will see a new airline, Akasa, promoted by billionaire Rakesh Jhunjhunwala, take to the skies, while the country’s oldest private airline, Jet Airways is looking to resume flights after coming through a long debt resolution plan with new owners. While Akasa has Vinay Dube, a former CEO of GoAir and Jet Airways, as its CEO, Jet Airways has appointed Sanjiv Kapoor, an aviation veteran, to run the airline in its new avatar. The airline, however, has roped in Vipula Gunatilleka, a former CEO of SriLankan Airways as the CFO.

“What cannot, however, be explained is that almost three decades after Jet Airways had come up and was run successfully till its collapse, none from the Jet Airways management team has been considered worthy of leadership roles by airlines that were established subsequently,” Bhargava says. “A question needs serious introspection about whether Indian carriers have to groom individuals for CEO/COO roles in the future, and if having a background with a foreign airline is not a mandatory requirement.”

Already, ratings agency ICRA expects industry earnings in the aviation sector to be adversely impacted in FY2022 due to lower revenues and higher air turbine fuel (ATF) costs. “The onset of Covid-19, along with continued high fuel prices, will delay the demand recovery in FY2022,” ICRA says in a statement. “Consequently, debt levels are likely to remain high for the industry and are estimated to be at around Rs 1 lakh crore (including lease liabilities) for FY2022, with the industry requiring an additional funding support of Rs 20,000 crore and Rs 22,000 crore over FY2022 to FY2024.”

All this has meant most airlines have undertaken several cost rationalisation measures, including salary cuts for employees, leave-without-pay options and laying off pilots and crew members. Some airlines have also sought deferment in their lease rental payments. “Others have also entered sale and lease back transactions to shore up liquidity in the near term. However, until profitability and cash inflows improve, the airlines will require funding support to meet their expenses,” the ICRA report says.

Yet, the outlook for the sector seems rather robust. The Indian aviation market needs over 1,900 aircraft in the next 20 years to keep up with the growing demand for air travel. Aircraft manufacturer Airbus projects the 20-year traffic growth of India’s civil aviation sector at 7.7 percent, almost twice the world average of 4.3 percent. Domestic traffic growth is expected at 8.2 percent, one of the world’s highest.

“But we must remember that after a point, India will be home to producing leaders who have the right exposure to the market, with deep insights into the sector,” says a sector expert who did not wish to be named. In recent times, Vistara had promoted Deepak Rajawat as its new chief commercial officer, signifying its intent to promote homegrown talents to drive growth. Rajawat had been with Vistara since its inception.

In the late 1990s and 2000s, as India’s economy opened up, many small and large companies had to rely on foreign CEOs in order to bring the necessary expertise. These included Mark Ashman at HyperCity, Brian Bade at Reliance Retail and Joachim Horn at Bharti Airtel. Over time, however, as Indian CEOs blossomed, the trend had reversed with many Indian CEOs joining the top rung.

“These things take time and building world-class airlines need a specific skill set and expertise,” the sector expert adds. “We must remember that these are Indian flag carriers, and we are hiring foreigners to run the operations. When it comes to global ambitions, foreign CEOs make sense while for domestic and regional ambitions, we might have adequate talent in the country.” Clearly, it’s only a matter of time before Indian CEOs come to rule the roost.

Tweets by @forbesindia
Photo of the day: Bridging the gap
Over half of the Asian affluent possess crypto investments in their portfolio