Can India bring back the billions of dollars our students spend abroad?

Getting beaten up in the poor neighbourhoods of a foreign city is only the known problem. The unknown one: Indian students spend billions of dollars each year in pursuing studies abroad, thus robbing our poor government and poorer people of all that wealth.
The question, therefore, is can at least a part of the money be brought back to create economic activity and jobs here?

Hold on. This is no anti-globalisation propaganda. Just wondering if it is viable for India to let its bright minds labour abroad when it needs them most now. These boys and girls need to come back and spend their schooling dollars in India. 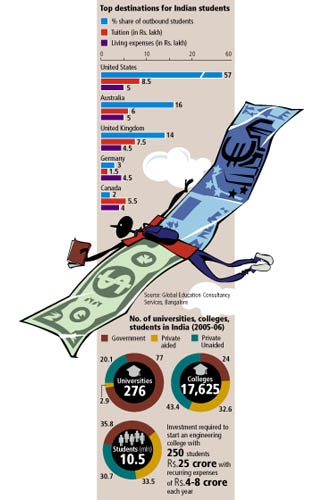 Image: Malay Karmakar
Just how much do our students spend abroad?
Just how much do our students spend abroad? Human resource development minister Kapil Sibal puts the figure at $20 billion; industry body Assocham (Associated Chambers of Commerce and Industry of India) estimates it at $13 billion. Even if we go by the lower number, the drain on the foreign exchange is huge.
Each year, 150,000 students leave India. The US, Australia and UK are their most popular destinations. With 350 universities and 17,000 colleges, India must surely be able to accommodate them? Not really. Barring top institutions that are world-class, a vast majority of Indian institutes lack the quality these students need. Prime Minister Manmohan Singh pointed out in 2007, “almost two-third of our universities and 90 percent of our colleges are rated as below average on quality parameters.”
India’s entire expenditure on higher education is 0.6 percent of GDP, which in absolute terms for a trillion dollar economy is $6 billion. For the 12 new central universities that the government announced recently, the budget is $72 million. Contrast these figures with the world’s richest university, Harvard University, which has an endowment of more than $30 billion.
The typical cost for a course abroad, including tuition and accommodation, is Rs. 20 lakh. And most students want to study aboard because the degrees make it easy for them to get permanent resident status.
India’s next problem is supply. A student who just missed getting into an Indian Institute of Technology is not too different from a student who got through. But there is a sea of difference between the institutes they end up in. The result: Those who missed out don’t mind spending a lot to have a quality education abroad.
Many constraints to quality — better libraries, labs and faculty — can be removed with more funds. The government must first ensure that universities are properly funded before expecting miracles. Arvind Panagariya, economics professor at Columbia University, says, “The government simply does not have the resources necessary to expand the higher education at the requisite pace.”
It must ensure that private capital, entrepreneurship and leadership are attracted to education, just as in any other thriving sector. Foreign universities should be allowed to set up centres here. The present higher education system, with University Grants Commission (UGC) at the top, cannot accommodate such dynamism. “The UGC is one of the few remaining monopolies in India. It must be abolished with higher education fully decentralised,” Panagariya says.