South Asian students security fears have already cost the country more than half a billion dollars. Time for the Kangaroos to wake up 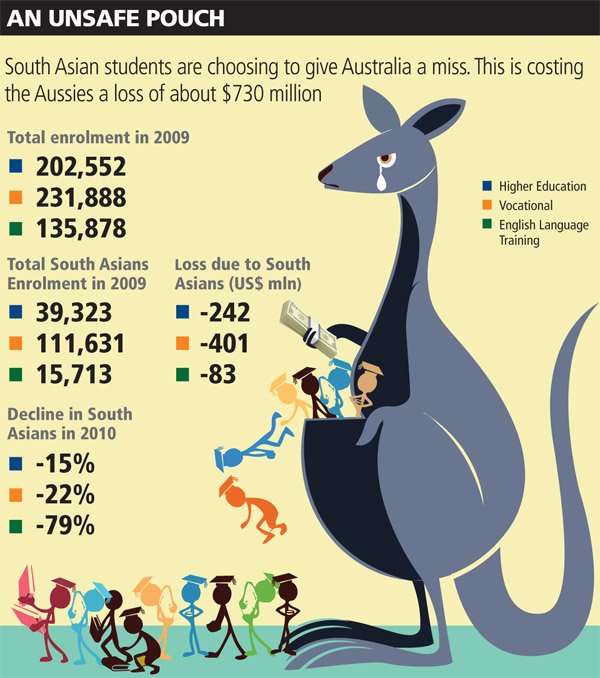 Infographic: Vidyanand Kamat
This year, the figures are not so good. According to data from Australian Education International (AEI), course commencements for the four months to April of 2010 are down 3.3 percent compared to the same period last year, driven largely by a 17 percent slump in ELICOS (English language intensive courses for overseas students) and a 3.8 percent decline in VET (vocational education and training) sector.

In 2009, Indians accounted for a fifth of total international student enrolment. It is the second largest nationality after the Chinese among international students in Australia. If you count all South Asians, they account for a quarter of total enrolment. Over the last two years, while the total enrolments have grown at 18 percent annually, South Asians were increasing at double that rate: 36 percent annually.

In total, South Asian commencements in Australia have declined 29 percent. If the trend continues for the rest of 2010, there will be a decline of 43,000 South Asian students compared to 2009, resulting in a loss of $730 million in export revenue.

Australia has always been an attractive destination for South Asian students given its lower tuition fees and more affordable cost of living as compared to the US or UK. The number of South Asians wanting to study abroad is not likely to decrease in the immediate future provided that affordability and demand is rising in the home countries whereas the supply of quality institutions at home cannot keep up. A foreign degree usually also means a pathway to immigration.

So will UK, US or Canada see a 40,000+ inflow of South Asian students in 2010 while Australia loses its edge? It’s  time for Australia to start paying attention.

Tweets by @forbesindia
Netbook: Ideapad S10-3t
The Perfect School For You