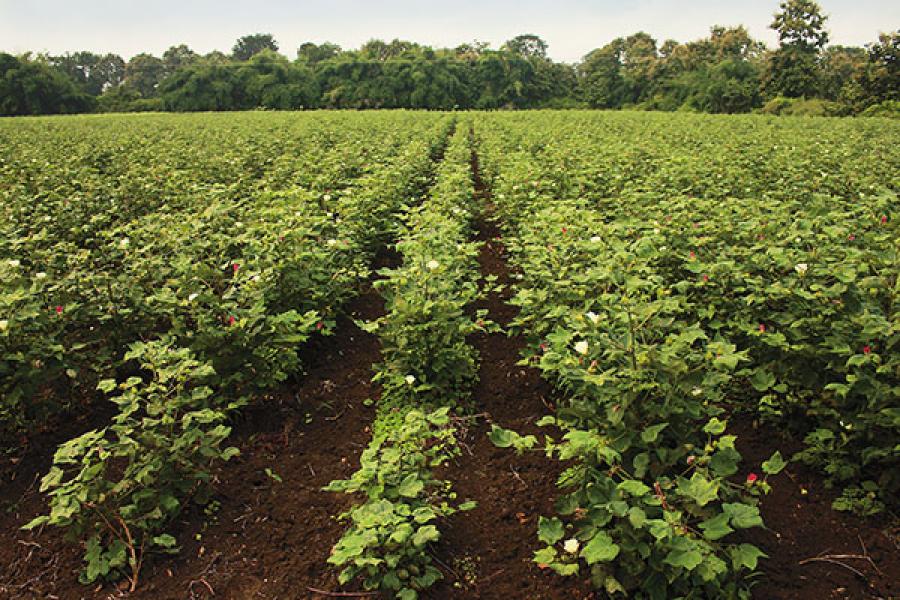 When politics and ideology influence scientific decisions, people scorn regulators and take autonomous actions that can have grave consequences.

While the Supreme Court-appointed committee of scientists has sought an indefinite pause on field trials of genetically-modified crops, farmers in Vidarbha have sown cotton which is resistant to a weed-killing chemical even before regulators have approved its commercial release. After three years of safety trials, US multinational Monsanto’s Indian affiliate had applied in March for a licence to sell its herbicide-resistant GM (genetically modified) seed. But the Genetic Engineering Appraisal Committee (GEAC) did not consider the application in its meeting that month.

This correspondent saw the herbicide in action in the field of a well-to-do farmer in Yavatmal, Maharashtra. Weeds in the sprayed fields were wilting while cotton plants swayed in photosynthetic glee at the plight of their tormentors. The farmer had sown six of his 50 acres under cotton with the seed that, he said, had been smuggled in by Gujarat dealers from the United States and Argentina.

At Rs 800 per acre for a packet of 650 gm, this is Rs 543 cheaper than legally saleable Bt cottonseed without weed-burning traits. The prefix Bt is an abbreviation for a soil bacterium whose gene makes cotton leaves toxic to bud-and-flower-eating weevils. The Bt variety currently in use has two such genes to outsmart the evolutionary cunning of weevils. The herbicide-resistant version is spiked with another agro-bacterium gene which is immune to glyphosate, a widely used weed killer.

The stealth action of farmers shows their yearning for labour-saving and profit-enhancing technologies, but is fraught with risk. Though GM crops are believed to be safe, protocols have to be observed to ensure they remain so. One recalls the events of 2001, when Navbharat Seeds, a Gujarat company seen as a saviour by farmers, sold pirated Bt cottonseed a couple of years before the GEAC permitted Mahyco Monsanto Biotech to sell its variety. The Central government ordered the Navbharat crop to be burnt, but the Gujarat government did not oblige. It feared the wrath of the farmers, who were encouraged by organisations like Sharad Joshi’s pro-market and pro-GM Shetkari Sanghatana.

“If the government does not give permission for new technology, we must adopt it by stealth or agitation to send a message,” said the farmer who asked not to be identified. According to him, 60,000 packets, enough to cover about as many acres, have been sold in Hinganghat, Warora, Wani and Rajura talukas of Maharashtra’s Wardha, Chandrapur and Yavatmal districts. He used them first last year; the seeds have been in circulation for three years now.

It is a message that the ministry of environment is not getting ever since its previous minister, Jairam Ramesh, converted the approval process for Bt brinjal in 2010 into a spectator sport where the sane voice of science was drowned at ‘panchayats’ across the country organised by cymbal-clanging ideologues of various plumages.  Anti-GM activists like Vandana Shiva of Navdanya and Kishore Tiwari of Vidarbha Jan Andolan Samiti, with their sympathisers in the media like The Hindu’s rural affairs editor P Sainath and Parliament’s committee on agriculture, led by the Marxist (and reflexively USA-bashing) law-maker Basudeb Acharia, have painted Bt cotton—and therefore GM crops—as killers of pests and peasants alike.  They have targeted Monsanto, which enjoys a monopoly in Bt cottonseed, though there are five other Bt technologies in the market.

The monopoly cannot be abused without political connivance; since 2006, state governments fix the price. Gyanendra Shukla, Monsanto’s head for the India region, says competition drives the price down by as much as 40 percent (without denting its royalty of Rs 174 a packet).

In a May 2012 article, Sainath lampooned The Times of India for converting an October 2008 news report about the social and economic transformation that Bt cotton had brought about in Vidarbha’s Bhambraja and Antargaon villages into a couched advertisement for Mahyco Monsanto 33 months later. He ridiculed the yields claimed for Bt cotton and insinuated that it was responsible for most farm suicides that had occurred in Maharashtra, with Vidarbha leading the way. Though “none of the farmers reduced the issue of the suicides or the (agrarian) crisis to being only the outcome of Bt cotton,” Sainath said, “they punctured many myths about its miracles, costs and savings.” By a remarkable coincidence, Acharia arrived at the same conclusion word-for-word in his report to Parliament three months later, while seeking a ban on GM crop trials because Bt cotton is the ‘contributory factor’ for 7,996 farmer suicides that had occurred in Vidarbha in the previous five years.

The myths that need to be punctured are those that have been inflated with ideological helium. “Bt is good,” says Omprakash Bhikamchand Lohiya, 58, of Hiwari village, about 18 km from Yavatmal town. He has been growing cotton since the age of 15 and recalls people using concoctions of neem and garlic to get rid of the weevil infestation. Lohiya is a small farmer. He has three acres, all of them under cotton. But his farm is fertile, and water is available very near the surface, being on the lower side of a teak forest that recharges the aquifers. He gets 1,500 kg of cotton an acre—three times more than in pre-Bt days and expects a 500 to 700 kg increase due to the use of drips for irrigation and injection of fertiliser. “There is somewhat more profit,” says Lohiya coyly while dispensing the wisdom that if one diligently follows agronomic advice “there is no question of taking one’s life.”

Lohiya’s neighbour Vijay Mahadev Niwal, 49, is a farmer-cum-motorbike dealer. An engineer, his family of four brothers owns 75 acres, two-thirds of which are under cotton. Niwal says Bt cottonseed has doubled and even tripled yields because of lesser weevil damage, while incomes have improved because of fewer pesticide sprays and the abolition of Maharashtra’s compulsory procurement at depressed prices. Suicide pockets, according to him, emerge from a “legacy of debt.” If Bt cotton was loss-making, “farmers would not repeatedly plant it”. 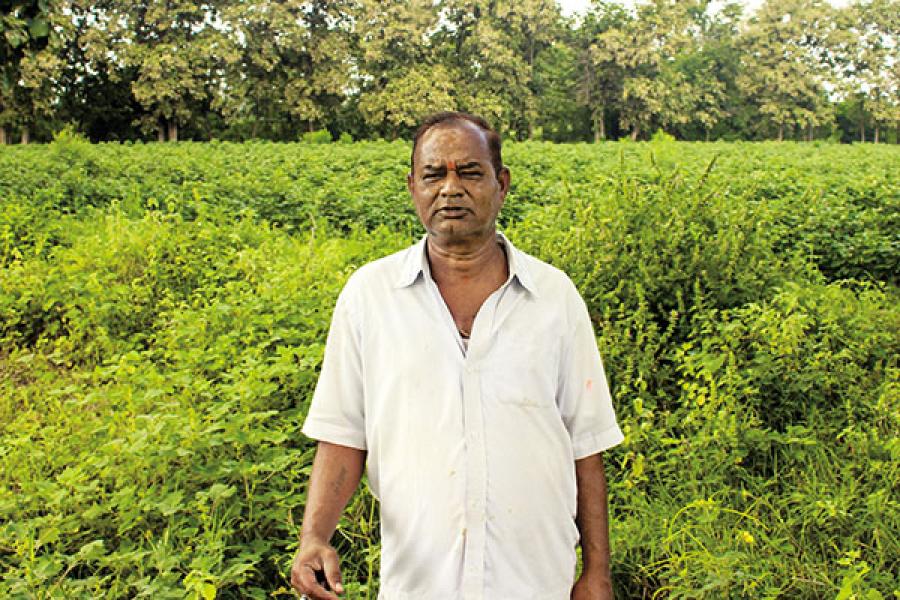 Image: Vivian Fernandes
Omprakash Lohiya says his yield has risen threefold with Bt cotton
“Because of Bt, in my areas 90 percent of farmers do cotton,” says Dilip Rao Nandokh, 45, of Jalna district’s Malkapur village. “Otherwise our plight would have been like that of the Vidarbha people.” Nandokh has nine acres, two of which he bought for Rs 14 lakh each, on which he grows cotton with drip irrigation. These gave him 45 quintals. An intercrop of cauliflower yielded Rs 2.5 lakh in four months. His son, graduating in agricultural studies, wishes to pursue post-graduation in entomology, and take up a job at the nearly Mahyco facility, while tending to his farms.

Indeed, a combination of fewer sprays and tripling of average yields had more than doubled income per acre to Rs 6,400 in Maharashtra’s rain-dependent areas and Rs,10,000 in irrigated fields, agriculture minister Sharad Pawar told the Lok Sabha in August. Farmers had voted their approval; 92 percent of the state’s cotton area is under Bt, he said.

For Ram Kalaspurkar, 59, this is proof of a mega conspiracy. A bio-diversity enthusiast, this electronic engineer believes that multinationals had prepared for a Bt takeover by convincing (that is, bribing) Indian plant breeders to “artificially emasculate” native varieties so that they became sterile when pollinated by gene-tweaked ‘terminator’ cotton. “Farmers are using Bt cotton because they have finished everything,” laments Kalaspurkar, whose double-storeyed house with a Volkswagen Beetle stowed in a shed speaks of concerns somewhat removed from those in the hovels. A heap of variously-shaped gourd shells advertises his penchant for seed preservation. That passion is played over a 170-acre farm, supported by the very vocal anti-GMO activist Vandana Shiva’s Navdanya—a network of Indian seed keepers and organic producers. But he sees redemption in a backlash. “From Amravati to Akola, people have switched from cotton to soyabean,” he says. 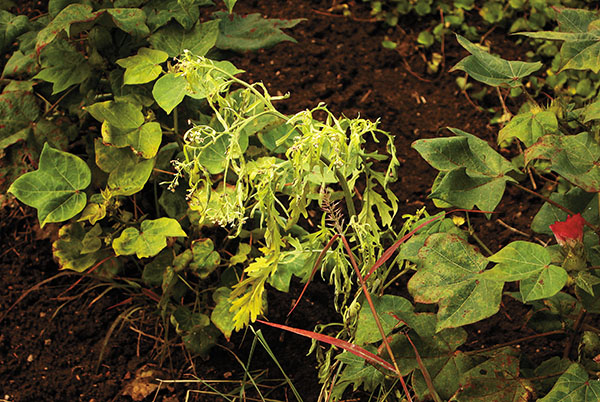 Wilting weed in a herbicide-sprayed Bt cotton field in Yavatmal

Indeed they have, to diversify risk. Amit Rathod, 22, of Yavatmal’s Bothbodan village has three acres equally under soya, cotton and jowar. So has Kailash Narayan Jadav, 40, a pan-beedi seller.

Studies by economist Tushaar Shah’s team show that Vidarbha’s rainfed cotton area shrank by a third in the 15 years to 2009, and was replaced by soya. But soya has not given succour. Those lured by high prices last year are staring at a loss, caused by a prolonged spell of rains. “It is spade and pickaxe and work in Yavatmal for me,” says Vijay Rathod, 32, staring at his rain soaked soya harvest, now drying under a cloudy sky. With his six-acre farm returning just a fifth of the amount he had borrowed, it is easy to see why Bothbodan is gloomy; there have been 17 (unconfirmed) cases in the past two years. The fields have more stone and soil, and water just slips through, as if greased.

If the vaunted gains of Bt cotton lend themselves to controversy, it is because yields vary with the weather, soil conditions, irrigation, seed quality and agricultural practices. A Planning Commission study in 2005-06 gave per hectare savings ranging from Rs 3,320 to Rs 10,351 for rainfed cotton, and Rs 22,051 for irrigated cotton in Akola.

While cotton is withdrawing from Vidarbha, Shah finds it is gaining ground in Saurashtra, Gujarat, which shares similar terrain and social landscape. Irrigated cotton area has doubled in Saurashtra to 35 lakh acres, or 8 percent of total cotton area, unlike one percent in Vidarbha.

Quoting studies which analysed 2002-03 National Sample Survey (NSS) data, Shah says that while Vidarbha farmers get one picking  of cotton, Saurashtra farmers spend 20 percent more on inputs but get more than double the output, getting a saving of 90 percent. The people’s groundwater recharge movement, rationed and assured electricity to farm pumps, the May-long mobilisation of the administration for agricultural extension, and a fourfold increase over Vidarbha in milk production
have contributed to Saurashtra’s prosperity.

Crop failure, and not any particular crop, is why suicides happen. Among the many reasons is the Maharashtra government’s failure to provide irrigation, encourage rain conservation, and promote judicious use of water through drips and sprinklers.

The national crime data show that housewives as a group tend to have an affinity for the noose, perhaps because of the domestic shocks they have to relentlessly absorb. And while West Bengal leads in both the number and rate of suicides, more farmers tend to kill themselves in Maharashtra. There, the number of farmer suicides tripled to 3,337 in the 17 years to 2011, suggesting an increase in rural distress. But the rate per lakh has tapered from a peak of 4.6 in 2002, when Bt cotton was introduced, to nearly three in 2011. This tapering coincided with a dramatic expansion in Bt cotton area.

Suicides in Vidarbha are not an indictment of Bt cotton but of the government. The wide use of stealth herbicide-resistant cotton shows an absence of governance. Villages also lack social capital. Bothbodan is a jumble of houses built on streets criss-crossed by waste water. The cemented access road is a mass lavatory where the entire village defecates. Is it any wonder that such infernal living conditions spark suicidal tendencies?