The Carbon Project in Uganda 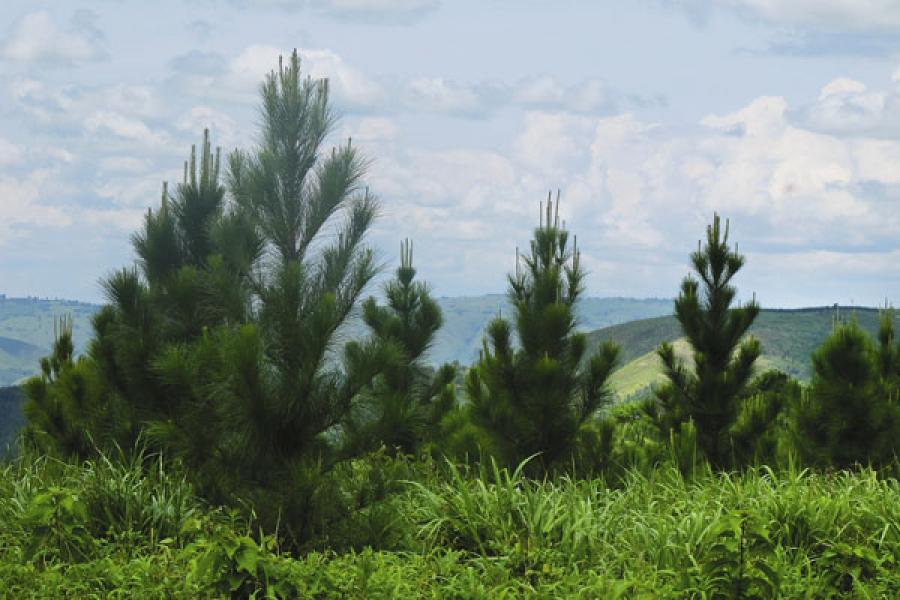 In the peak afternoon sun, a pickup truck rumbles through the dirt track flanked on either side by rolling hills of neatly lined pine trees as far as the eye can see. At a clearing in the middle of the pine forest, the truck comes to a halt, raising a cloud of dust. It is the only irritant to the fresh smell of pine. This isn’t a temperate coniferous forest in North America. It’s the heart of equatorial Africa, Uganda. And these alien, fast-growing, Caribbean pines are gaining popularity as the solution to reforest degraded land.

“We have reached the carbon project area,” says Lemmy Kasimbazi, forest supervisor, National Forestry Authority (NFA), as he gets out of the truck. A nondescript signboard hanging on a shrub reads, “RECPA Carbon Project Area — funded by World Bank”.
NFA is the Ugandan government body partnering with World Bank to establish the Nile Basin Reforestation project — 2,015 hectares of pine forests — that will earn carbon credits under United Nation’s Clean Development Mechanism (CDM). RECPA, or Rwoho Environmental Conservation and Protection Association, is the local community group that will manage 17 percent of the project area as part of a collaborative forest management plan.
This World Bank initiative aims to provide a new financing mechanism to help countries like Uganda restore degraded forests, allowing local communities to benefit from the CDM. The basic idea is that trees trap carbon dioxide and hence planting more trees is an effective offset against carbon emissions. One tree in a tropical forest could potentially trap one tonne of “carbon dioxide equivalent” over a lifetime of 50 years.
If the Uganda experiment succeeds, it could hold valuable lessons for developing countries like India.
Of the 10 carbon forestry projects approved ahead of the Copenhagen Climate Summit in 2009, three are in India. None of the Indian projects is World Bank funded, but the bank is actively looking at India. And it is using its existing pilots as critical groundwork to replicate them in other countries.
A Patient Game
The Nile Basin Reforestation project is divided into five sectors, of which Project No. 3 in Rwoho Central Forest Reserve, 320 km southwest of the capital Kampala, is the first in Africa to be approved for trading on the CDM market.
A lot hangs in the balance. Trees can’t store carbon dioxide forever. They could be cut down in which case the carbon credit would be lost. Under CDM rules, such credits would need to be replaced with credits from other types of clean energy projects — which a poor country like Uganda may not be able to. Keeping the new forests going despite the economic demands of the community and natural disasters will be a challenge.
Also, the minimum timeframe for these projects is 20 years. The credits have to be sold to developed nations with the World Bank acting as a conduit. Credits developed from forests get a lower price than the ones developed through other means. It remains to be seen how successful this plan will be in getting the community its rewards. 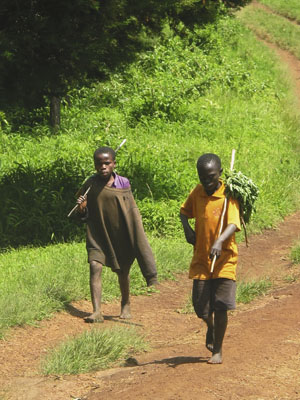 In the centre of a small village in Rwoho, people crowd into a tiny yellow room whose walls are covered with photographs, handwritten charts, and a vision statement that reads “Towards a sustainable healthy, and environmental healthy community.” The room, overlooking the plantations, is the headquarters of RECPA, a voluntary environmental organisation formed in 2003. Jerome Byesigwa, chairman of RECPA proudly introduces the project: “You must have planted trees in your land to be a member,” he announces to his guests.
Its mission — plant trees — reflects the community’s concern over the depletion of a resource its members are heavily dependent on. Till the World Bank project came along, the group had been planting trees on their own land.
RECPA has 270 members and the annual subscription is 5,000 Uganda shillings ($2.2) with a one-time initial fee of about 10,000 shillings ($4.4). This money is used for maintaining the plantation; NFA provides free seedlings and land and the group members manage all operations on the 60 hectares they have planted so far. (The World Bank has given NFA an initial grant of $300,000 to upgrade technology.) Those members who choose to be part of the carbon project pay an additional 100,000 shillings for a share, and can own six such shares. These shares also entitle them to carbon credits under the project. The earnings from the credits are yet to come and the projections are modest. They are expected to get about $65 a year per hectare from permissible forest activities and carbon credits combined. 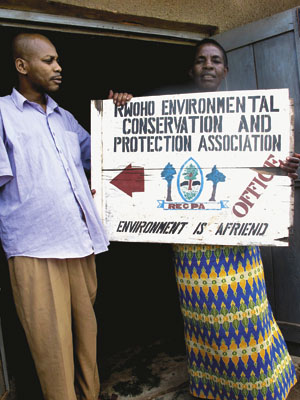 Image: Deepa Krishnan
HOW CARBON FORESTRY WORKS Under the first commitment target of the Kyoto Protocol (2008-2012), only afforestation and reforestation projects are eligible to earn carbon credits. The forests act as carbon sinks, storing the carbon dioxide in the wood and soil, and prevent immediate release. Every tonne of carbon dioxide equals one certified emission reduction (CER) credit. For the Uganda projects, World Bank’s BioCarbon Fund channelises the finances and has the first right to buy most credits.
The community is fully aware of the challenges. The people have not got any carbon money but they have no doubt it’s on its way. “Recently, the accountant of World Bank visited us and promised that the money will come as soon as possible,” Byesigwa says. “We dig deep in our pockets, but it’s for the long-run,” says Amanyire Deo, project co-ordinator, RECPA. The community cannot access forest resources freely for nearly five years after planting.
Yet, the members of RECPA are somewhat lucky. Theirs is a self-motivated initiative that fits in like a piece in a jigsaw puzzle with NFA’s collaborative forestry plans. The carbon projects aim at restoring ‘degraded grasslands’. But the pastoral communities living in the vicinity have no option but to graze their herds on these lands. Since the carbon projects came up in 2006, their access has been severely restricted. Now they can collect firewood only twice a week, or collect herbs, keep bees and so on. Inter-cropping is prohibited. So their expenses are mounting.
Johnson Tiboruhame, a young man at a nearby trading centre, rues that he cannot graze his animals. Not that he’s unhappy with the adjoining RECPA. He simply cannot afford the fees, nominal as it is, to join them.

Realistic Optimism
About 13 percent of Uganda’s landmass is under forest cover, but every year 2.7 percent of these forests disappear. And barely a few thousand of the 3.5 million hectares of forests are under sustainable plantation. Forest conservation is clearly a priority for Uganda.
The community is concerned about deforestation, but restrictions on the forest activities could have serious repercussions. “The pastoral community is hampered, and we hope the children won’t end up malnourished without enough milk,” says RECPA’s Deo, visibly concerned.
“Convincing the community is a challenge. They always look for quick returns,” he adds. So the economic appeal of carbon projects is certainly a lure.
However, carbon trading itself is an amorphous concept and CDM is mired in rules causing extended delays. They require governmental support that is either sporadic or nonexistent in most countries. Despite this, two new communities have expressed interest to work with NFA.
A Fine Balance
The World Bank is still verifying parts of the project and NFA believes that all five blocks will be registered under CDM this year. “The money will be based on the verified report and NFA and World Bank have agreed on an annual payment,” says Xavier Mugumya, co-ordinator for climate change, NFA.
Annually Carbon Project No. 3 is expected to sequester an average of 5,590 tonnes of CO2e (carbon dioxide equivalent) per year over 20 years, and by 2012, it is expected to sequester 29,795 tonne of CO2e, according to the United Nations Framework Convention Climate Change Project Document for Nile Basin Reforestation project. It’s not simple to quantify reduced emissions for forestry projects. The yields would still be based on statistical modelling, explains Mugumya.
Also carbon credits from forestry are priced lower because they are not permanent. At $4 a tonne, it’s a fraction of the prices enjoyed by permanent CERs (certified emission reduction), currently from $12 to $24. Further, there is no price incentive for developers to choose CDM forestry over the alternative voluntary market. The choice of non-native trees like eucalyptus and pine, which mature in a relatively short time of 20 years (native trees like mahogany take 70 years) is also hotly debated by environmentalists. “Non-native species deplete water and do not support agro-forestry or biodiversity,” protests Frank Muramuzi, executive director of National Association of Professional Environmentalists. Despite all the uncertainty around carbon trading, developing countries like Uganda have welcomed the idea. Such CDM projects bring in the much-required money for forest conservation. Communities have great income expectations from them.
The Green Goblin
Finally, the project is dependent on nature. Forest fires are a real threat, especially in the dry season (June to September). The carbon pricing has been risk-reduced by 25 percent for this, but there is no guarantee against a complete wipe-out. “We have no manpower,” confesses Moses Kabaireho, sector manager, Bugamba, NFA.
“Compensation and crop-insurance... We haven’t even discussed it with the community,” he says. It will be 20 years before the first full harvest. The jury is still out on the risks and benefits of carbon forestry. Yet, in Rwoho everybody is more eager than not. Outside the RECPA office, 75-year-old Alanzio Gakibayo points to his trees across the hill and says, “These are for my grandchildren. I won’t be there to cut them down; I’m too old for that.” He smiles smugly at the prospects of a healthy future. But if there’s a fire, what next?