While it has long been known that corporations face reputational risk related to their own operations and the behaviour of their employees, they are increasingly being held to account for the operations and behaviour of their suppliers as well – a fact recently brought home by the collapse of the Rana Plaza garment factory building in Bangladesh. Research Fellow Amanda Moss Cowan looks at the implications.

The Rana Plaza death toll of over 1,100 made the incident the deadliest in the history of the garment industry, and the worst industrial accident worldwide since the Bhopal gas leak in India in 1984. With workers forced to remain inside by management even after cracks had been detected in the building, it was a scene tragically reminiscent of the 1911 fire at New York’s Triangle Shirtwaist factory – an event that sparked efforts in the US to improve industrial safety – when workers locked inside by management were unable to escape. 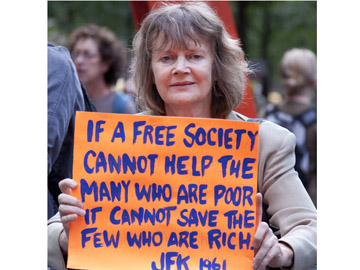 In the days after the April collapse, the event dominated the news. As details about working conditions in Bangladesh came to light, Pope Francis weighed in, decrying the garment industry minimum monthly wage of $37 as “slave labour”. Budget clothing retailer Primark admitted to sourcing clothing from Rana Plaza, prompting protest demonstrations at their UK stores. The one-month anniversary was memorialised with EU-wide demonstrations at Primark and other retailers, including a march on London’s Oxford Street by black-garbed protestors carrying a coffin, flowers and candles.

Image Courtesy: ShutterstockFacing this sort of crisis, it is understandable that a firm seeking to avoid supply chain-related risks to its reputation might think the wisest course of action would be to sever ties with producers revealed to be guilty of environmental or social misdeeds; yet these days, doing so is likely to produce even more pressure from activist groups and the media, who are encouraging downstream firms to work with suppliers to improve conditions. Corporations thus potentially face reputational risk not only for their ties with bad actors in the supply chain, but also for severing those ties, as was evidenced by the fact that, in the aftermath of the Rana Plaza collapse, the Walt Disney Company drew fire for its decision to pull out of Bangladesh entirely.

The Rana Plaza collapse was the latest in a series of lethal garment industry accidents in Bangladesh, and labour groups have called on garment brands and retailers to commit resources to preventing future catastrophes. To this end, they have been pressuring firms to sign the legally binding Bangladesh Fire and Building Safety Agreement, which requires companies to conduct independent safety inspections, make their reports on factory conditions public, and cover the costs for needed repairs. By early June, the agreement had been signed by more than 30 companies, including H&M, Benetton, Primark, Marks & Spencer and Tesco. Gap and Walmart continued to hold out, however, attracting further criticism. Gap has been targeted with a campaign, “Gap Deathtraps”. Walmart executives were confronted at their June annual meeting by activist shareholders demanding changes in the company’s corporate governance, as well as by a survivor of the collapse, who called on the world’s largest retailer to invest in improved working conditions in her country.

While the collapse of Rana Plaza focused the spotlight on the garment industry with particular force, supply chain shortcomings have recently affected a number of leading names in other sectors: from the European horsemeat scandal and Tesco, to terrible working conditions at the Foxconn electronics-manufacturing plant in China, linked to Apple, HP and Dell. Today, few product-focused industries can hope to avoid supply chain-related reputational risk.

A review of recently published academic articles on supply chain management reveals several insights into how firms can mitigate risk, and points in particular to increasing “traceability” within a firm’s network of suppliers as a first step towards reducing exposure. Traceability is the capacity to identify the provenance and processing associated with all source material flowing into the firm’s own operations. In a traceable system, firms are able to identify materials and products, track their locations, and account for any supplier processing that has occurred prior to the item’s arrival at their doors. Achieving full traceability means developing comprehensive systems of documentation and record keeping, implemented systematically throughout processing, shipping and receiving.

In the past, it was believed that “one-up, one-down” tracking – that is, knowledge of the immediate past owner and immediate future owner – was enough to guarantee sufficient information to track the history of a product. Practically speaking, though, if one link in the chain fails, managing risk becomes problematic, and nowadays companies seeking to mitigate potential indirect risks in their supply chains develop their knowledge of distant nodes in the production network – so-called “Tier 2” suppliers. Industries producing products prone to recalls (cars, food products, medical equipment and pharmaceuticals, for example) are more likely to have traceability systems in place already, but traceability is important for other firms as well – particularly given that Tier 2 processes generally are associated with more environmental and social harms, and therefore greater reputational risk. In fact, failure to adopt a robust system for traceability is becoming a source of reputational risk in and of itself – after Walmart denied awareness of a Rana Plaza contractor’s role in its apparel production, activists criticised the company not just for using the contractor, but for its lack of knowledge about its own supply chain.

Admittedly, making a commitment to traceability can be uncomfortable for corporations concerned that transparency within their network of suppliers may allow outsiders to use the information for their own advantage. However, on the positive side, research has shown that instituting a traceability system can result in reduced production costs and efficiency savings.

Research suggests further that some low-cost suppliers may in fact be high-cost suppliers when safety risks are included in calculations. In addition, delays in issuing recalls have been explicitly associated with higher losses and greater risks to reputation; traceable products mean firms are able to respond more quickly and confidently in the event of a crisis.

Traceability is thus an essential first step, since knowing who is part of the supply network is critical to improving their operations, and many customer-facing companies have already put policies in place that are designed to increase the transparency and accountability of their suppliers. Typically, these firms rely on third-party audits, but even firms employing reputable auditors run into problems when those auditors focus single-mindedly on known problems. At Rana Plaza, auditors had signed off on working conditions but paid no heed to structural problems in the building.

Similarly, in 2011, news reports revealed that foreign boats were using slave labour in well-regarded New Zealand fisheries – on-board monitors assigned to ensure compliance with strict environmental requirements turned a blind eye to rampant abuse of staff. To avoid the risks stemming from use of the “checklist” approach, some companies have decided to abandon the use of sanctions and penalties in favour of more collaborative efforts that focus on educating suppliers and providing resources to help them improve their practices. Research supporting this trend indicates that suppliers engaged collaboratively are less likely to sweep problems under the rug and are more likely to make substantive improvements to their practices.

Tweets by @forbesindia
Is There Life After an MBA?
Why Unqualified Candidates Get Hired Anyway