The Teller of Stories

He was succeeding as a banker and was pretty much in line for a BMW. But one day, Chetan Bhagat decided to write more than just the ledger account

In mid-2003, in a bar called The Bull and The Bear, in the financial district of Hongkong, Chetan Bhagat stared at the three tequila shots he’d ordered. He was miserable, messed up.
It wasn’t supposed to be this way.

He’d lived the dream. He’s started modestly: army kid, not much money in the family, strict upbringing, the kind where even television was frowned upon. His kid brother and he would make up stories for each other to amuse themselves. Well, okay, ‘strict’ was a euphemism: he says now he’d call it ‘almost oppressive.’ Plus his parents didn’t get along, so there were frequent tense periods. But, he adds, there was frequent laughter too; his mother could make people laugh, and he credits his sense of humour to her. (He also goes on to point out that all his stories have involved screwed up families; “I don’t know any other kind.”) 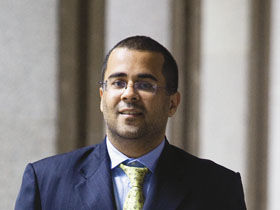 Getting a seat in an IIT was his ticket out. It was the place where he really started looking around, finding himself, observing people. His batchmates, he recalls, all seemed lost: “They didn’t want to be here, they were all escaping, they didn’t know who they were.” He got involved with theatre, wrote plays.
When it came to taking a summer project, he didn’t want to do “anything hardcore.” There was a placement at Cadburys that no one else wanted, and he leapt at it: “Two months in Lonavala! Chocolates!” His project, to fix a wrapping machine that was supposed to do 250 chocolate lollipops a minute, but was only doing 75. He puzzled over it, but didn’t crack it.
One night, he bumped into the foreman, a veteran of the place. Rather than go eat alone in the executive canteen, he went along with him to the worker’s canteen. They talked for three hours, about the man’s life, his children, his struggles. The next day, the wrapping machine was miraculously performing at full capacity. The foreman told him that he’d worked there ten years, he knew the machine inside-out. Until then, “No one heard me. You did. I had to make your project successful.”
That was Bhagat’s epiphany. No more machines, he decided, it would be people from now on. So, when he graduated from IIT, he decided to do an MBA, at IIM Ahmedabad. After which he’d work abroad, China for choice. “I thought it would be better to see what India would be like in ten years, then come back.”
He got a job in Hongkong, with Peregrine. That office folded in six months, a victim of the financial crisis, and he moved to Goldman Sachs. So far, so good.
But he was sure his boss hated him; the man seemed to think that Bhagat should have been glad to have a job, given the environment. He certainly didn’t have a good word to say about his work, his leadership qualities, heck, even his haircut.
He’d been working on a book — frequently during office hours, in a sort of I’ll-show-him kind of way —about life in IIT. He’d been sending it to publishers back in India, but had collected a pretty comprehensive set of rejection letters. Publishers asked questions like would this sell abroad, is it going to get a big foreign advance? And the answer was — rightly, he says now — no. With each rejection, he’d gone back to the story; he edited, did complete rewrites, trying to build in literary flourishes, make it more descriptive, colourful, attractive to agents, whatever.
And now he’d just heard that another publisher didn’t want the book.
He stared at the tequilas. That was rejection number eight.
He downed the tequilas. All three of them. He took some mints for his breath, and went back to the office, and somehow made it through the day. He asked himself what he was doing: he was supposed to be writing because he loved it, this book was supposed to be the raised middle finger to his boss. Instead, he was turning into an alcoholic, and, worse, that bastard would be proved right; he was really a failure.
Fortunately for him, a short while down the line, a little ray of sunshine peeped through the gloom.
Kapish Mehra, the son of the owner of Rupa & Co, was just getting into the family business. And he liked the book. He persuaded his father to take it on.
This was a time when a novel published in India would need to sell around 1000 copies for the publisher to break even. (For Indian writing in English at that time, 2000 sold would make the book a bestseller.) Bhagat said that thanks to IIT and IIM, he had around 200 people he could count on to buy copies. But Rupa was dubious, unsure it could sell the other 800.
Nevertheless, they bought the book. Bhagat worked on it some more; took out the flourishes — “I realised I can’t be Arundhathi Roy” — brought back more of the humour he was comfortable with — putting in “more Chetan” — and the book, Five Point Someone, went to press with a rather adventurous 4000-copy run.
It sold out in a day, says Kapish Mehra. Surprisingly though, it wasn’t hailed as a smash hit; and it got mixed reviews. But it did well enough to give Bhagat the chance to write another.
It was only when that second book, One Night @ the Call Center, came out, he says, that people seemed to suddenly recall that they’d read Five Point Someone.

...Call Center took off, and Bhagat was now a star. That was when, he says, “the hate started.”

The literary establishment wasn’t impressed. Some reviews were savage. Many put his success down to smart marketing and pricing. Bhagat was bewildered. They were comparing his books to classics and finding them wanting. “Does it say on the cover: ‘this is a great book’? Do I say that on my Web site? Saying Chetan is no Tolstoy is like saying Infosys is no Google, so Infosys is a crap company. Why are they [the media] so high-handed? Newspapers that are sold for a two rupees, magazines that are sold at railway stations, read by ordinary people...” he trails off, takes a breath. “They’re not serving the country, they’re serving the country club.”

He agrees that marketing played a role. And “luck and randomness are a big part of it. I think I have a talent to entertain, believe in what I do and I do try my best to care for people. People have given me a chance. However, that still does not explain why I am read the most. That comes from luck, or if you want to be romantic about it, destiny. We also are in a winner-takes-all society, where the winner gets a lot more attention than the next guy, who may not be very different.”
I tell him of a friend who had seen a young man in a bus from Palampur to Delhi. He was reading a Bhagat, slowly, but pleased with himself — this was the first English book he’d read — and enjoying it thoroughly.
That’s where Bhagat has his fan base. People who are intimidated by the ‘literary,’ who love reality TV and the latest Bollywood offering, who dream and swear in languages other than English. His first three books (He titled the third The Three Mistakes of My Life in a dig at himself and the three books he’s written) have sold around 7 lakh copies each, Mehra tells us.
Rupa’s plans for the fourth, the recently released 2 States - The Story Of My Marriage, are even more ambitious: a million copies in 12 to 13 weeks; it has, thus far, sold somewhere between 600,000 and 700,000 copies. ...Call Center became a movie — the unimpressive Hello — and Five Point... is hitting the screen as Three Idiots.
Bhagat today is no longer a banker. He’s a full-time writer and house husband. After moving to Mumbai as a director in Deutsche Bank, he eventually decided that he had to choose. Giving up the plush bank job wasn’t easy: “I was making a lot of money, in line for a BMW, that kind of thing.” But, he reasoned, the books were what were giving him real joy. And once he had made the call, he hasn’t looked back. Except, occasionally, when he misses the fat monthly cheque.
The criticism of his output evidently hurts, though he claims a thick skin. When 2 States was being edited, he says, he asked Rupa to put “the most anal liberal arts major to vet the copy.” He wanted to say to critics at large, “It’s not bad English! Just say you don’t like it! I got bigger pricks than you to work on it.”
He’s made a choice here as well. “People who love me will love me. Those who hate me, nothing I do will change their minds. Even an Obama has critics. Who the hell am I? I can please those who love me or try to convert those who hate me. But negativity brings my spirit down. So I chose to do the former.”
What’s next for him? He’s not sure. He wants to be an instrument of change. He wears his patriotism on his sleeve, to the point of jingoism, and has been observed to be quick to take offence when it is questioned. He’s not tied to the idea of being an author. He sees himself more as an entertainer. Perhaps TV, his own show; maybe more involvement with movies (he wants the reach that Bollywood can give him). He wants to make a difference.
Wouldn’t politics be a natural next step? He considers this. “It would be frustrating. Too much sucking up needed. I want action.” Pause. “But maybe ten years later.” Pause. “Maybe five.”

(This story appears in the 08 January, 2010 issue of Forbes India. To visit our Archives, click here.)