As Comptroller and Auditor General of India, Vinod Rai has produced unforgiving audit reports pinning government departments, the most recent being one on the 2G spectrum scam, which led to the telecom minister’s losing his job 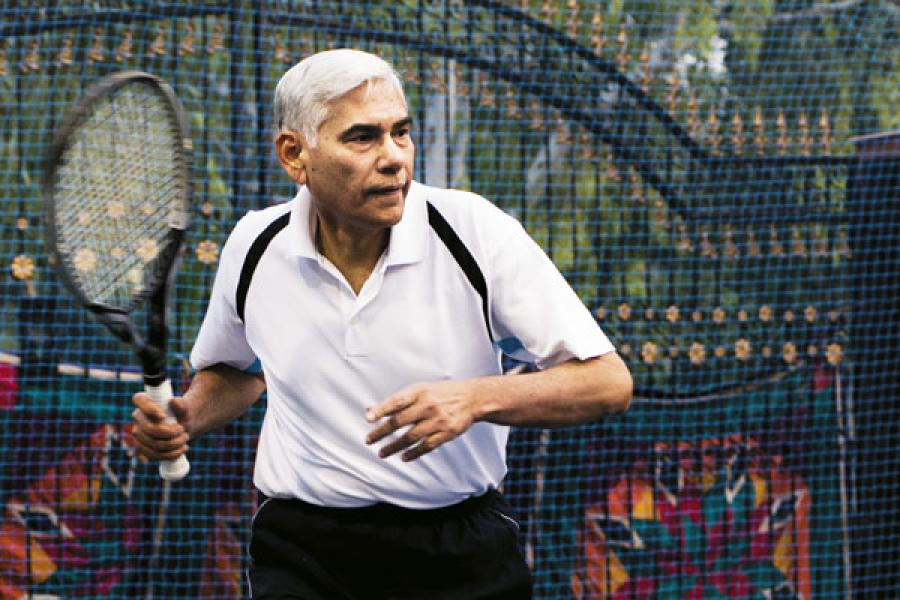 My Mentor: My father. He was the son of a daroga. He studied in a village and qualified to be an M.A. L.L.B and D.Phil from the Allahabad university. During World War II, he enrolled in the Army and, after cessation of hostilities, was sent to the College of Military Engineering to become an engineer. He was later commissioned in the Corps of Engineer as an officer.
How he has helped me hone my leadership skills: He imbibed in me the capacity to be a good recipient of ideas and an excellent salesman of my own innovative thinking. To be a team leader was important but it was equally important for me to be a good team player.
His advice that has stayed with me: The attainment of perfection was of paramount concern in all activities of ones personality. He was an epitome of integrity. He wanted me to be forthright in my views and above board in my dealings.


Vinod Rai has a good first serve. He takes full advantage of his over six-foot frame to smash the ball across the court. The opponent, a colleague of his, has to receive the ball at an uncomfortable height. It is not competitive tennis; it is a match that is almost like evening banter. But the players are at it with enthusiasm. The venue is an abandoned parking lot converted into a tennis court at the old office of the Comptroller and Auditor General (CAG) in Delhi, a few hundred metres away from the spanking new Dholpur stone structure that is the new CAG office complex.

Rai has just inaugurated the court and is playing the first match with his colleagues. “After we got a new office, we decided to convert this space into a tennis court,” says 62-year-old Rai, who has been playing tennis and climbing mountains since he was in college. But it is not the aces he serves on the tennis court that have made him famous.

As Comptroller and Auditor General of India, Rai has served up a few uncomfortable audit reports that have pinned many government departments beyond the baseline.

He has consistently hit the headlines for his unforgiving audits, ranging from the scathing report on the shoddy preparation for the Commonwealth Games to the latest on spectrum allocations for second generation (2G) telecom services.

Bureaucratic grapevine suggests there was quite a bit of pressure on Rai to dilute the 2G report but he held fast, merely asking his people to check for unnecessarily harsh or unfair language.

The report ripped apart the government, even pointing a finger at the prime minister for arbitrarily giving away spectrum, a valuable and limited national resource. The CAG report said the ultimate loss to the exchequer could be as high as Rs 1.76 lakh crore.

The report, coupled with the leak of a set of recorded conversations with a corporate lobbyist, has already cost Andimuthu Raja his job as telecom minister and stalled the Winter Session of Parliament.

Rai is among that rare breed of civil servants who know how to get work done in the government. A former colleague says Rai has an uncanny ability to cut through red tape.

One morning in January 2006, top officials of the finance ministry were summoned by then finance minister P. Chidambaram. The minister was reviewing proposals for the forthcoming Budget and there was a paragraph in his speech about the setting up of India Infrastructure Finance Company, something he had announced in the previous Budget speech as well. The hitch was the company had not yet been incorporated.

“Chidambaram was livid. He asked how long will you guys take to just incorporate a company,” remembers a bureaucrat familiar with the incident. The usual passing-the-buck had happened within the ministry and both the department of economic affairs and the department of financial services had not been able to get the company going.

As Chidambaram flew into a rage, Rai, who was then heading the department of economic affairs, butted in and said it would be done by the weekend. After he came back to his office, Rai called a joint secretary in the ministry of corporate affairs and told him this company had to be registered by that evening. The official told him it was next to impossible and offered to brief him on the long process and the required documentation.

“I am told by your colleagues that you are a very good officer. It is the prestige of the department at stake. This has to be done,” he told him. The official reportedly said that since Rai had challenged his competency, he had to get it done.

The entire machinery cranked into action, with the registrar of companies even getting a diesel generator from another department to print the incorporation certificate because there was a power cut.

India’s premier infrastructure funding agency was incorporated in those frenetic 24 hours and the certificate was on Chidambaram’s table, along with a note from Rai, the next day.

In the finance ministry, Rai is well regarded by his former colleagues because he served as a bulwark between them and the minister. “He had this thing that he was the captain of the team and he could not expose them to the minister’s ire,” says an official, on condition of anonymity, who worked under him.

Rai himself does not believe in being confrontational; he believes in being persuasive. Sometimes it works, sometimes it doesn’t.
He considers bringing autonomy to the boards of state-owned banks as one of his biggest achievements in the finance ministry. But it was severely put to test once.

This incident too happened in 2006, when Chidambaram was his minister. In May that year, the Reserve Bank of India had increased interest rates against the minister’s wishes. The markets had tanked and Chidambaram went on television reassuring investors, despite his officials advising him against it. Next, he wanted them to call up public sector banks and ask them not to hike lending rates.

“I advised him that he should not do it. We should let the bank boards decide for themselves,” Rai remembers. Chidambaram was adamant that since the government owned the banks, he had a right to direct them. Rai stood his ground until the minister finally relented. Rai says it is the secretary’s duty to give his minister the correct advice, however unpleasant it may be.

Unpleasantness is built into the CAG’s job as the chief nitpicker of the government. The CAG audits how the government’s money is spent and holds its different arms accountable for the rupees that pass through them. He is now trying to change that impression and convince government departments that CAG audits can be constructive. “My endeavour here has been to convince various departments that it is not us versus them but that we are on the same side,” says Rai.

At the prime minister’s request, the CAG recently made a presentation before the defence ministry on spending money allotted to it. Defence deals often attract criticism because of their very nature and size and the ministry has been hesitant in spending on even legitimate and urgent requirements. Rai suggested to the ministry that it should, perhaps, look at a time frame of 30 months for budgeted spending. The ministry has now agreed to start placing orders that have been stuck for a while.

Rai is now trying to get the mandate of the CAG expanded in keeping with the times. Currently, the CAG can audit the finances of only government departments. For instance, when it examines utilisation of funds under the National Rural Employment Guarantee Act, panchayats, which ultimately use the funds, are under no obligation to share information about the funds they use. “In 1971 [when the Audit Act was enacted], there were no PPPs [public private partnerships] or Panchayati Raj institutions. So they do not come under our purview unless the government specifically requests us to audit them. Even then, each panchayat will have to make a request,” says Rai.

Back at the tennis court, Rai and his partner have won the game comfortably. It is not that easy inside the office though. The 2G report, ironically, has held up Parliament and one of the casualties is the new Audit Act that would have widened the CAG’s mandate and strengthened Rai’s hands.
In government, you don’t win points even on aces.

Tweets by @forbesindia
5 Top Names To Have On Your Board
Sandeep Tambe: Protecting our Flora and Fauna