Sandeep Tambe is special secretary, Department of Rural Management & Development, Sikkim. His dedication to the people and his ability to innovate are the most important factors in making Sikkim one of the most successful states in implementing NREGA 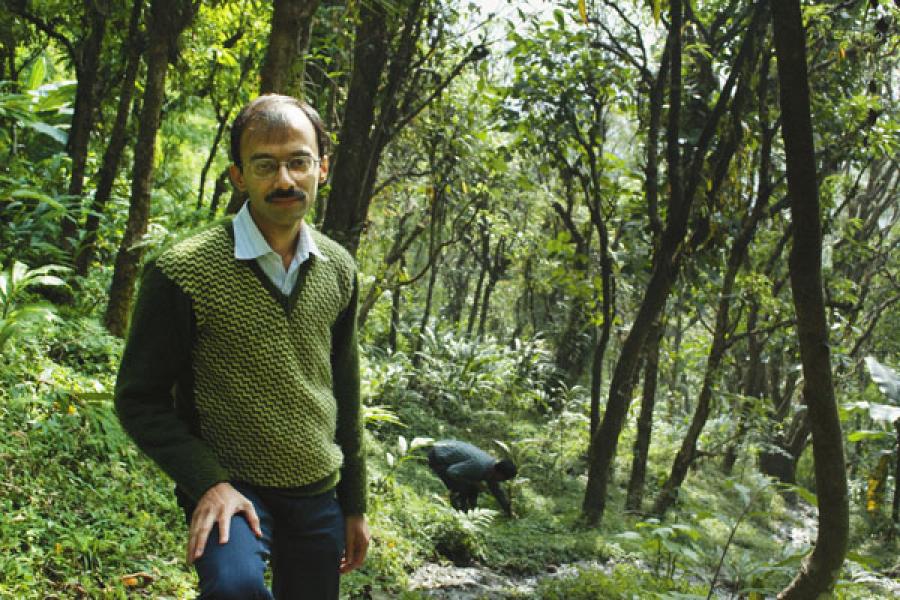 My Mentor: Mahatma Gandhi. I read his works, especially his auto-biography (My Experiments with Truth) extensively during graduation.
How he has helped me hone my leadership skills: Gandhiji always led from the front whether it was the Dandi March or the fasts he undertook. Gandhiji also taught about ‘doing it yourself’ and ‘learning by doing’ so that one has the skills to be self-reliant.
His advice that has stayed with me: I will give you a talisman. Whenever you are in doubt, or when the self becomes too much with you, apply the following test. Recall the face of the poorest and the weakest man whom you may have seen, and ask yourself if the step you contemplate is going to be of any use to him. Will he gain anything by it? Will it restore him to a control over his own life and destiny? In other words, will it lead to swaraj [freedom] for the hungry and spiritually starving millions? Then you will find your doubts and your self melt away.

“Shere Khan sees me not as a man but as a creature of the jungle.”
[Mowgli, the man-cub, explains why his formidable foe gave up its grudge against him in the end.]
--- From The Jungle Book movie


Running up the heavily forested Karia Pahari (Black Mountain) after a swim in the Narmada, sweat trickling down his forehead, eight-year-old Sandeep Tambe would often imagine himself as Mowgli from Rudyard Kipling’s iconic tale.

The year was 1979 and Tambe was the youngest in the pack, just like the man-cub. His two cousins, two sisters and a bunch of Gond (a local tribe) friends flanked him. Together they went charging up the hill in their native village of Ramnagar in the Mandla district of Madhya Pradesh — famous for housing the Kanha National Reserve, one of country’s foremost tiger sanctuaries and the inspiration for The Jungle Book.

It was a special day. His grandmother had just let him in on a secret — a tiger was rumoured to be in the jungle. Young Tambe was excited. It was only during summer breaks that he could come out of Rourkela, Orissa where his father worked in the SAIL steel plant. Could this be the day he meets Shere Khan?

Today, the 39-year-old Tambe is a member of the Indian Forest Service. He is a mechanical engineer from IIT Mumbai, a Ph.D. holder from the Wildlife Institute of India, a wildlife photography enthusiast and a long distance runner. For the last three years, he is also the officer-in-charge for the implementation of NREGA (or Mahatma Gandhi National Rural Employment Guarantee Scheme) in Sikkim. But in many ways, Tambe is still quite like the young Sandeep who saw himself as Mowgli.

The only change is that Tambe now spearheads much bigger packs and has more vicious foes than the imaginary Shere Khan to contend with.

Foes like corruption and indifference: Two big reasons why despite being the most widely acclaimed social welfare scheme in the country, implementation of NREGA — or the lack of it — across most states has disillusioned even the people who campaigned for it.

However, in a recent gathering of activists from across the country in New Delhi, bemoaning the problems afflicting NREGA implementation, no one knew about Sikkim’s stellar performance. Neither did they know of the man who made it possible in Sikkim. Perhaps, like everyone else, they missed spotting Tambe since from a distance one only sees the civil servant, a bureaucrat.

But as Tambe nears the end of another routine five-kilometre trek to arrive at a village in the lower reaches of a hill around Gangtok, the Lepchas (the original inhabitants of Sikkim) living in the slopes greet him with such applause that he appears no less than a champion long distance runner being cheered by the onlookers as he is about to cross the finishing line.

“The jungle speaks to me because I’ve learned how to listen.”

Tambe left Infosys, where he was working in the US, for a career in the wild. That was in 1994 “I did it because taking care of the forests and the wildlife gives me the maximum satisfaction and happiness,” says Tambe. “One does not need such material things to be happy in life. [As a child] I saw them [the Gonds of Madhya Pradesh] work hard right through the day and then enjoy themselves each evening.”

It is no surprise then that even as a special secretary-rank officer — the second-highest rung of bureaucracy in the state — he still does not own a TV or a car. What he does own is a scooter which his wife rides and which has made him famous in his residential colony as “the husband of the woman who rides the scooter”!

But what is a forest officer, who loves wildlife, doing implementing NREGA for the rural development department in the first place?

“I have come to see [that] there is not much difference between wild animals and poor human beings since neither can speak for themselves. It gives me immense satisfaction to work for their welfare,” he says.

For the villagers Tambe is an activist, in the guise of an officer, who has transformed their lives by the manner in which he has implemented NREGA.

Today Sikkim is ranked second after Tripura in achieving the most important NREGA outcome — providing 100 days of work in a financial year to the rural people. In 2009-2010, Sikkim could achieve 80 days on an average for the wage seekers, with 23 percent of the households completing 100 days. This is significantly higher than the national achievement of 54 days. For 2010-2011, this figure is expected to cross 90 days for Sikkim.

Over 2009-2010 nearly 60,000 households out of one lakh were provided employment and 43 lakh person-days of employment were generated. Sixty-four percent of total funds utilised were in the form of wages paid to the labourers; 84 percent of the total wage payouts were done through the banks, thus providing a base for financial inclusion.

Mind you, Sikkim is the third highest terrain in the world with the average height of a village being around 5,500 ft. It is also the steepest terrain in the country with an average slope of 45 degrees. And with houses being scattered all over the hills, reaching out to all families, especially for the usual NREGA-kind of labour-intensive work, tests not just one’s physical strength but also mental resolve.

Yet Tambe is acutely aware of how NREGA provides a much-needed income cushion for the people of a fragile ecosystem, having few traditional employment opportunities. He has promoted micro works across the terrain to encourage involvement, especially of the rural women who may not want to be too far away from their kids and home.

“Just being there for providing 100 days of labour is not enough. We have to facilitate that demand also,” he points out. He has adopted a simple combination of transparency and accountability.

“I met him to complain about the delay in NREGA payments and he promptly called up the concerned block official in front of me to resolve the matter,” says Dava Pintso Lepcha, head of the Naitam village panchayat.

Social audits and vigilance reports of NREGA in Sikkim throw up an exceptional figure: On an average, almost 98 percent of all NREGA expenditure has been validated by the people at the gram sabha, or the village assembly level.

Tambe achieved this by involving the best NGOs in the state to act as facilitators on behalf of the people. He also got his own departmental officers sensitised and trained by experts from the National Institute of Rural Development. But perhaps what has had the maximum impact on social audit taking roots in Sikkim are his regular review meetings and field visits to almost all parts of Sikkim. “Social audit is, in my opinion, the most potent weapon of fighting corruption. It is the best way to make the system accountable to the people,” says Tambe.

Villagers like Dava have found Tambe to be accessible, forthright and proactive in providing solutions and guidance for there wellbeing.

For example, since last year, Tambe has been encouraging villagers to take up livelihood-related activities. By April 2010, the percentage of footpaths had come down from over 50 percent in 2008-2009 to just 16 percent of the overall activities undertaken, while water conservation activities have risen to over 70 percent.

Now the villagers are getting paid to work on their land and plant high-quality cardamom plants which in turn are likely to provide yields as much as Rs. 240,000 per acre per annum after another couple of years, thus reducing the need for NREGA kind of support by the government.

“I had read an article by Mihir Shah [currently, a member of the Planning Commission] which said that if NREGA activities improved the productivity of land then it would have a multiplier effect in the economic status of the poor,” Tambe says. “And that would be ideal. Isn’t that precisely the point of having NREGA in the first place?”

“So that is how it came to pass that Mowgli, keeper of the jungle law, protector of creatures great and small, became lord of the jungle.”

He says he was very surprised when he was handpicked by the Chief Minister, Pawan Chamling, to oversee NREGA when it was first introduced in the state three years back. However, his selection is hardly a surprise to those who have known him and his achievements as a forest official.

M.L. Arrawatia, who is secretary in the department of Science and Technology and also an officer of the Indian Forest Service, has known Tambe as a probationer in the IFS. Arrawatia talks about how Tambe single-handedly rid the forested area in Sikkim of hundreds and thousand of cattle and yak grazers since 2002. What did the trick was his persuasive skills as well as his novel idea of turning the yak grazers into forest guards called “Himal Rakshaks” to ensure they did not lose their livelihood. As a result, since then Sikkim’s forest cover has gone up from 43 percent to 46 percent.

It is this empathy and understanding of the poor and disadvantaged that made Chamling yet again handpick Tambe this year to lead another big resolve by the state government: To make Sikkim the first poverty free state in India by 2013.

Given Tambe’s record and ability, Sikkim may well become the first state in India to rid itself of poverty by 2013 but what about Tambe’s first love, what about his date with Shere Khan?

“Well,” he immediately smiles, sits back, takes a deep breath and looks at his two-year-old son, whom he wants to experience The Jungle Book, “It would be a dream come true if I was in charge of the Kanha Tiger Reserve!”