A journey into Icelandic waters proves to be an introduction to the wonder of whales, as also to the grim reality of their fight for survival 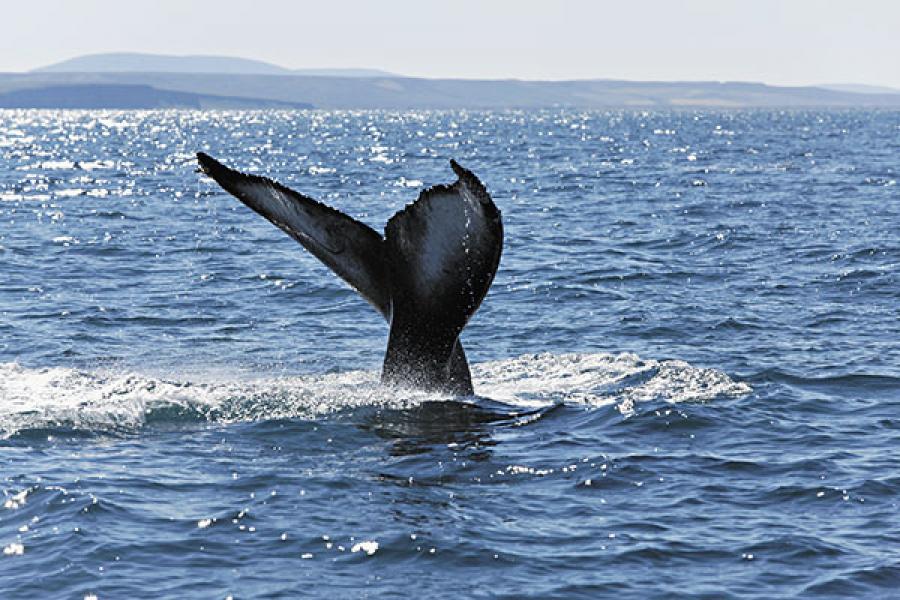 Image: Getty Images
A humpback whale sighting in the waters off the harbour town of Husavik, northern Iceland

There is a pregnant silence on board the schooner, Haukur. The only sounds are the creaks of the old wooden deck, the wind in the riggings of the sails high above us and the gentle swishing of our bow clipping through the waves in Skjálfandi Bay, Iceland. Then, suddenly, we hear a crisp command: “1 o’clock! Fin!” In almost mechanical synchronisation, 15 heads swivel to see a graceful triangular shape cutting through the surface of the sea, a dark shadow almost ominously looming below it. That is my first glimpse of a minke whale. Almost dolphin-like in appearance (if dolphins were the size of a small truck), minke whales are impish, mischievous-looking creatures that are invariably inquisitive and prone to showing off for boats like ours.

As the tourists coo and click pictures, I fancy I can hear a slightly exasperated exhalation from my right—that is the captain, making his presence felt. The only person unmoved by the display, he is at the wheel, eyes peeled, looking for larger game. All salt and rough edges, he is the essence of the sea. Not the pleasant, warm beachside kind either: Think fierce, cold North Atlantic. What belies this description, though, are his eyes. Blue and sparkling, they hint at a sense of humour buried deep beneath the choppy waves.

Evidently the skipper has seen enough of minkes and wants to move on to more interesting game. I don’t blame him. It’s like coming to Mumbai and being amazed at the sight of pigeons. Unlike their endangered cousins, the humpback, fin, sei and blue whales (among others), minke whales are categorised as being of Least Concern to the International Union for Conservation of Nature’s Red List, which documents species and their relative risk of extinction.

Of course this isn’t the case with most other whale species, especially not off the coast of Iceland. Even during my short time here, as I circumnavigate the country on my road trip, I can see relics of a whale hunting industry—old harpoons, whalebone sculptures, even a whaleskin washtub in an old house I visited.

Iceland and whaling have had a long and complicated relationship. Whales have been hunted in this region since the 12th century, first by early Scandinavian Vikings and subsequently by their modern descendants in Norway and Iceland. In fact, there are records that date back to the 12th and 13th centuries, of whales (especially smaller species like the minke and pilot) being driven into fjords and getting harpooned there.

In the old days, whalers would simply harpoon a whale with a spear that marked their ownership, and then wait for the carcass to drift ashore, at which point they would claim it. Naturally, this technique led to many disputes regarding ownership of beached whales. The resolution of these helped create substantial records about the whaling practices of the time. 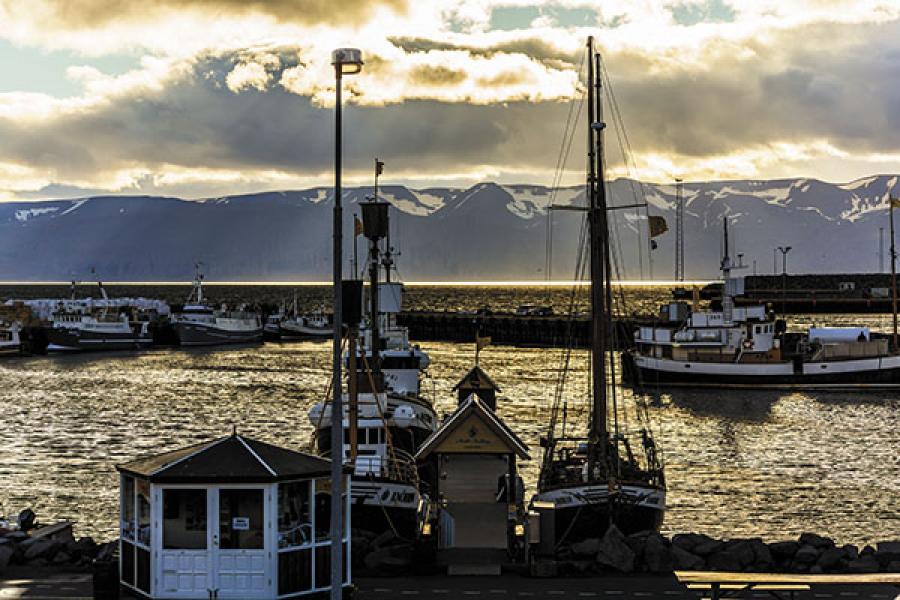 Unlike then, however, today commercial whaling is deplored around the world (even within Iceland, there is a strong lobby against it). Notwithstanding that, in 2015 alone, 184 whales (155 fin and 29 minke) were harpooned in Icelandic waters by the country’s sole whaling company, Hvalur.

Iceland and Norway are the only two countries that continue to hunt whales commercially. (Japan insists on “scientific whale hunts” but the proceeds of those hunts still make it to dinner tables in the country.) This persists despite a drastic reduction in the consumption of whale meat by people in Iceland, Norway and Japan. In fact, only 1.7 percent of the population of Iceland consumes whale meat regularly. The rest of the whale meat (mainly minke) is sold domestically in Iceland and is consumed by tourists, according to local restaurants and meat dealers.

Unlike Hvalur, based in Hvalfjörður Fjord, in the west of Iceland, which is a throwback to the bad old days, most whale hunters in Iceland come armed with cameras rather than harpoons. Skjálfandi Bay, on the north coast, is home to the town of Húsavík, where much of the protest against whale hunting is from whale-watching tour operators. They claim that the revenue from tourism is far more important than the meagre amounts from selling whale meat. And from the proliferation of whale-watching tours in that town, the argument seems clearly made. Even on this, one of the last tours of the season, I am lucky to get a spot as the schooner was almost sold out. Tourists flock to Húsavík between July and September to spot whales in Skjálfandi Bay. With seats costing between ISK 10,500 to ISK 14,000 (Rs 5,500 to Rs 7,300) per adult, and four tours every weekday, that’s plenty of money to be made. 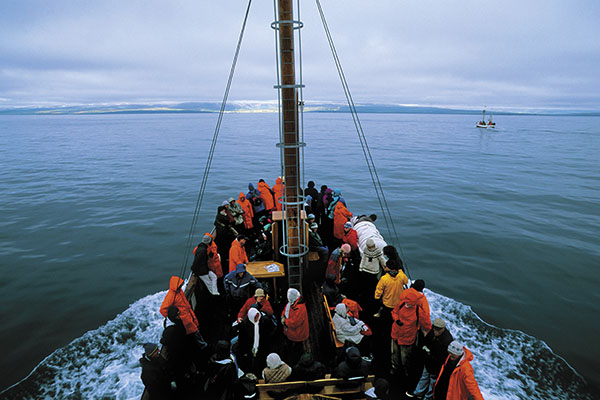 As the minke moves on, bored with showing off for the tourists, I take the opportunity to chat with a couple of whale researchers who are on board with us. Armed with a laptop each and some sophisticated cameras, they’re both more interested in the humpback population, which is finally making a slight improvement in numbers since the worldwide moratorium on whaling in 1986. “Last year we saw a number of juveniles, and a large family group,” says Emile, a French exchange student who’s spent the last couple of months in Húsavík studying the whales. “Although we haven’t positively identified individuals, we’re still hopeful of seeing some familiar fins.” Humpback whales are identified by matching patterns of light and dark skin on the fins and flukes, along with distinctive scars and other features. Like fingerprints, no two whales share the same fin pattern. This is why Húsavík Whale Museum, another tourist hotspot, requests tourists who have been on whale-watching tours to upload their images of whale fins to their website: The data from these photos can go a long way towards tracking populations and movement of the whales. 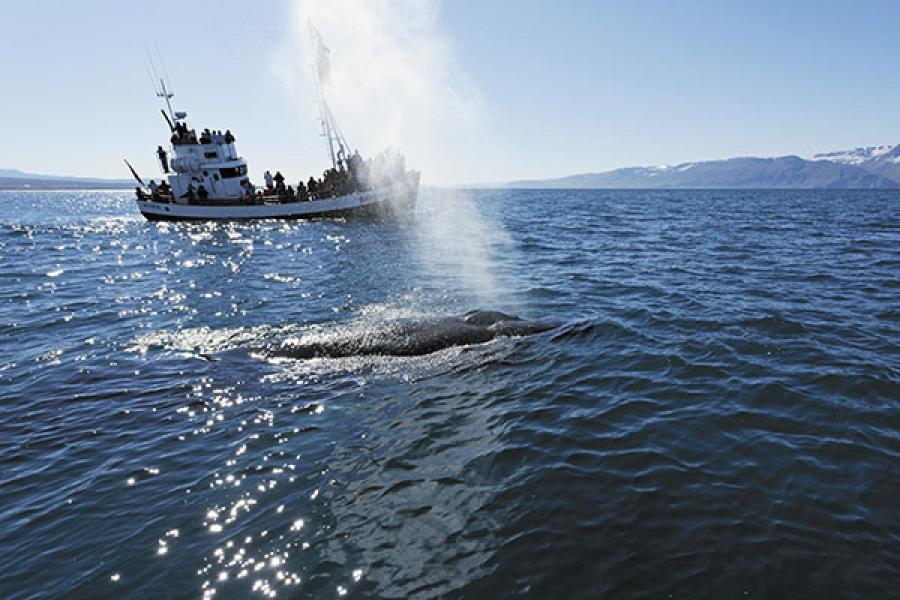 As the Haukur moves further into Skjálfandi Bay, the islands of Grimesby, just inside the Arctic Circle, appear on the horizon. Silence once again descends as we scan the seas for the distinctive plume of exhaling whales. After a few false alarms called by over-eager tourists, it finally happens. Our eagle-eyed captain spots something and shifts course rapidly. A few minutes later, a gigantic mist of exhaled water shoots up from the waves a hundred metres away. As we close the distance carefully, our guides are surprised. Instead of a skittish adult (who can be quite reticent and tend to shy away from boats, especially in Icelandic waters) we’ve encountered an adolescent humpback who isn’t old enough to realise that the people on boats might be carrying far more deadly equipment than cameras.

Adolescent or not, this creature is still the biggest animal I’ve ever seen up close. As it laps circles around us, to the delight of everyone on board (even the captain stops feigning disinterest), I notice it is more than half as long as our schooner. Our vessel is at 20 metres, which means this creature is well over 10 metres. When it grows out to its full size, this will be a magnificent specimen.

After eyeballing us for about 30 minutes, during which time we are treated to acrobatic manoeuvres, the humpback decides to go back to the serious task of eating tonnes of krill (small crustaceans), an activity that it engages in for half the year before going south for the winter to breed. Before each dive, the whale takes a series of deep breaths, like a freediver preparing for an extended stay underwater. Once it plunges in, the whale stays below the surface for up to 20 minutes, before coming back up.

It is during one of these dives that we make our exit. Our three hours on board the Haukur are almost up, and we decide to head for the shore. The stiff winds have chilled us despite the Arctic safety gear we have on; the much-welcome fresh cinnamon rolls and hot chocolate (with a generous tot of rum, or “captain’s pleasure”) are passed around as we reflect on the wonder of the creatures we’ve seen.

The playful humpback, especially, has moved me. It has reminded me most keenly of Douglas Adams’s observation on dolphins: “On the planet Earth, man had always assumed that he was more intelligent than dolphins because he had achieved so much—the wheel, New York, wars and so on—whilst all the dolphins had ever done was muck about in the water having a good time. But conversely, the dolphins had always believed that they were far more intelligent than man—for precisely the same reasons.” Replace dolphins with whales and you have my sentiments down pat. There is a curious childlike intelligence made evident in their behaviour, which seems to hint at a joke that’s barely on the edge of human perception, but one that whales are fully privy to. Whatever the truth about their humour may be, what’s clear is this: If we continue to slaughter whales, the joke is on us, and it’s a grim one—picture the gaping rictus of a skull.