Bordeaux to Yiwu: European wine on tables in China 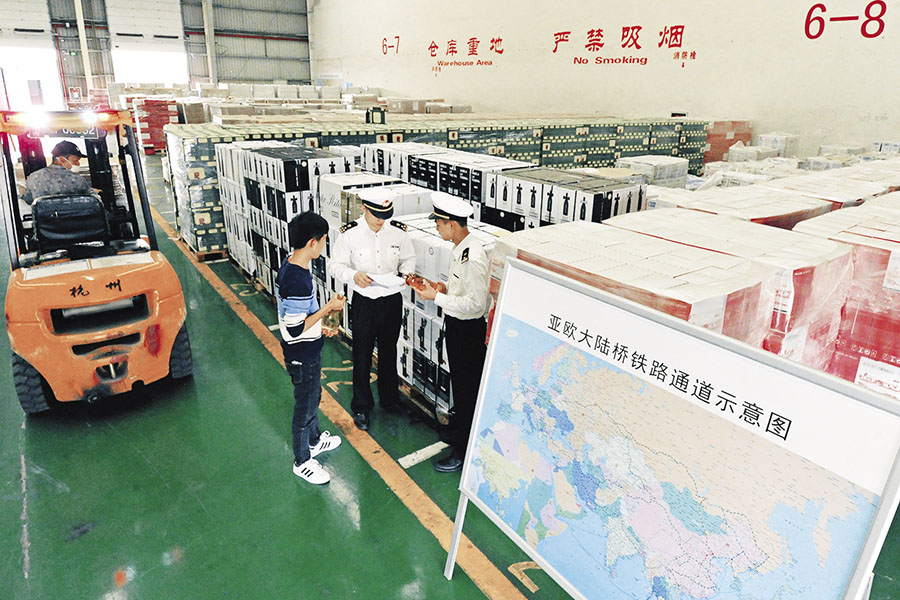 
The first direct-rail shipment of European wine has successfully crossed the expanse of Eurasia and arrived in China, opening up a new way for the wine producers of Europe to get their bottles on to the tables of the world’s fastest growing market for wine consumption.

This first shipment of European wine by rail to China was ultimately a test conducted by JF Hillebrand, a freight forwarder that focuses on alcoholic beverages, and Groupe InterRail, an operator of container block trains between Europe and Asia, to determine if the wine could be transported without damaging the product or its packaging. The train departed on May 5 from Duisburg, Germany, and arrived in the Chinese city of Yiwu 28 days later, traversing six countries and 11,400 kilometres in eight fewer days than it takes to get between these two points by sea.

One of the main challenges for shipping a sensitive product like wine by rail across Eurasia has to do with climate. Central Asia is prone to extreme weather fluctuations, and containers moving across such open expanses are prone to heating up like a closed car on a hot summer day or freezing solid, depending on the season. So this initial test shipment had its temperature monitored throughout the journey to ensure that the wine was becoming neither too hot nor too cold.

Researchers had found that in the middle of May, the temperature outside a typical container throughout the journey varied from 6°C to 35°C, while on the inside it ranged from –2°C to 58°C. Wine cannot be successfully shipped at these temperatures.

However, the containers that JF Hillebrand and Groupe InterRail used were equipped with a special foil liner, called VinLiner, which regulates the temperature and humidity of the contents inside. It worked, keeping the temperature inside the liner between 9°C and 32°C and the temperature of the liquid in the bottles at a comfortable 25°C to 29°C. The result: No damage to either the wine or the packaging. Success.

However, the foil liner that was used for this shipment can only be reasonably utilised for wine shipments in spring and autumn. For year-round service, European wine producers would need to rely on temperature-controlled reefer containers—such as those made by Unit 45.

Another thing that JF Hillebrand and Groupe InterRail were monitoring was how much force the bottles of wine would be subjected to along the 11,000-plus kilometres to China—a trip that would require two rail-gauge transfers and use tracks of varying quality. They found that the maximum force exerted on the containers was in the ballpark of 2Gs—about the same as a roller coaster. This was attributed to poorly constructed rail lines in Kazakhstan and China, but it ultimately had no adverse impact on the shipment, as the bottles were packed with adequate protection.

Initially received with much scepticism, the first trans-Eurasian rail routes went into regular service in 2012, primarily serving as a way for Western electronics manufacturers to get their Asian-made products to Europe. Since then, with the political and economic support of Beijing, a full-fledged, 40-lines-plus network has emerged, which links more than 15 cities in Europe with 20 cities in China, with cargo volumes doubling each year.

The advantages of shipping by rail between China and Europe are straightforward: It’s a way of getting products across Eurasia that can be twice as fast as shipping by sea and at a mere fraction the cost of shipping by air. The return trip from Europe to China is also heavily subsidised, making the cost of shipping a container over this route by rail roughly the same as the cost to have sent it by sea five or six years ago.

Wine is optimally suited to be shipped on these trans-Eurasian trains. “This solution complements sea freight and air freight; it is by no means a replacement to these solutions,” explains Jannson Chan, JF Hillebrand’s director for China.  “However, given the current difficult context for shipping lines—instability, unavailability, increasing prices—it not only means more options for big European wine-makers but also for Chinese importers.”

Tweets by @forbesindia
Hit Refresh: Satya Nadella's personal anecdotes make it a page-turner
The classiness of Vespa Elegante and an artistic timekeeper