Satya Nadella recounts how the culture at Microsoft was overhauled 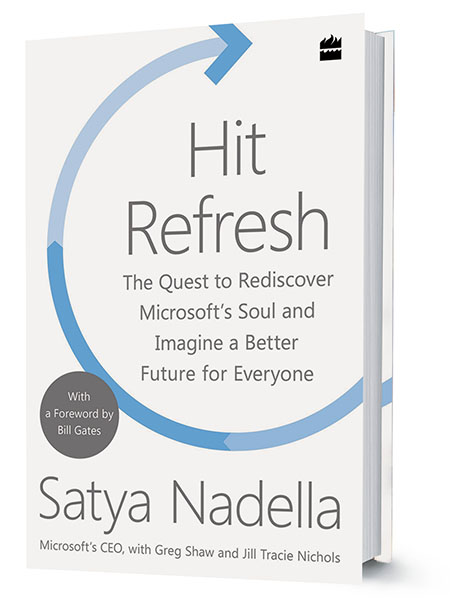 One way to read Satya Nadella’s book Hit Refresh—The Quest to Rediscover Microsoft’s Soul and Imagine a Better Future For Everyone is to jump straight to page 195, where starts the chapter titled ‘The future of humans and machines’.

But do ensure you go back and read about the captain in school who took a faltering Nadella off for an over, but brought him right back to see him take seven wickets, and the lesson Nadella learnt from that incident about the importance of empathy in good leadership. That lesson—along with everything else he picked up about respecting people—informs his views today on how we should build AI (Artificial Intelligence), and the role Microsoft must play in that effort.

Much of the book reads like what it is: A recounting of the Microsoft CEO’s thoughts on the most important aspects related to, what was essentially, an overhaul of the culture at one of America’s best-known technology companies.

It is a sort of corporate manifesto for the new Microsoft.

The book is co-authored by Greg Shaw, a Seattle-based writer, who has researched cricket in America, and Jill Tracie Nichols, CEO of Tracie Group, a marketing and communications consultancy, also from Seattle.

Where the book scores is when Nadella talks about his personal life, and how that influenced his work. Especially when he writes about his parents, wife Anu and their two daughters and son. “I missed Anu,” he says simply at one point, on his early working years in the US. He fixed that by giving up his Green Card and switching to H-1B, which made it easier to bring her to the US under the US immigration rules at the time.

There were deeply personal and extremely painful lessons too, right at the beginning of Nadella’s career at Microsoft, when his son Zain was born with cerebral palsy. He credits Anu—an architect by training, who gave up her career to care for their son—with pulling him out of the trap of self-pity by helping him put himself into Zain’s shoes.

An anecdote about three high school students building a program that helped Zain select his own music hints at the idea—always hovering close by—that technology can make a difference when it is infused with empathy.

When he was chosen to lead Microsoft in February 2014, he was an “unlikely CEO”, he says. He has, however, successfully led the company from a place that engendered antagonism among top teams—caricatured in a now-famous cartoon showing them pointing guns at each other—to one that wants to champion empathy and infuse that spirit into all its work.

It certainly wasn’t easy: Some 20,000 job cuts resulted as Nadella changed Microsoft, of which 18,000 were at Nokia, acquired by his predecessor Steve Ballmer. That the company’s value has risen by more than $250 billion on Nadella’s watch helps, perhaps, the cynic might say. But it’s hard to not believe that Nadella’s efforts are genuine.

The book also tackles some of the biggest questions that need answers as technological advancement accelerates exponentially, and brings its own challenges. Possibly that chapter on AI could have been titled as ‘Machines and the future of humans’ instead. Nadella doesn’t have the answers, although he does have some well-thought-through ideas about how we could reach those answers and what they might just be.