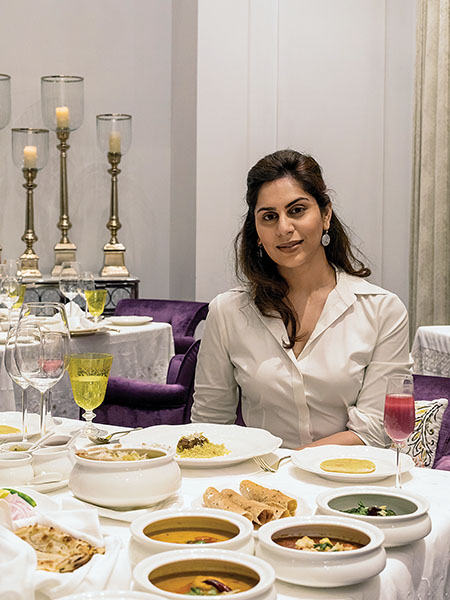 Upasna Konidela at the Dum Pukht at ITC Kohenur in Hyderabad
Photographs: Harsha Vadlamani for Forbes India
A long chandelier-lit corridor leads to an intimate antechamber. Tables here, clothed in stiff white, are offset by mauve cushioned chairs. There are candles and glass and discreet florals. The new Dum Pukht at ITC Kohenur in Hyderabad, the Indian hospitality major’s biggest launch this year, is quite a ‘power restaurant’, but discreetly so—designed, surprisingly, as a subdued royal zenana, unlike its more opulent siblings elsewhere in the country. It is only fitting then that I meet one of Hyderabad’s best-known young women entrepreneurs for dinner here.

Like the biryani we will inevitably sample towards the end of the meal, 31-year-old Upasna Konidela comes with serious pedigree. The grand-daughter of Dr Prathap C Reddy, chairman of Apollo Hospitals, she is vice chairperson, CSR, Apollo Foundation, and managing director of Apollo Life, a startup funded by the parent group.

Quite like her formidable mother (Shobana Kamineni, executive vice chairperson, Apollo Hospitals), aunts and cousins, Konidela is well-entrenched in the family business. But as we break bread (in this case, mande, a local wheat bread that resembles the North Indian roomali roti), and as I listen to her anecdotes about a changing Hyderabad and its entrepreneurial culture, it becomes clear that my guest is not content to be just a ‘scion’ who has had it all on a platter.

Platters are very much on my mind as we begin the meal. “What would you like to eat?” I ask a little apprehensively, given her reputation for fitness. As a teenager, Konidela suffered from what she calls “chubbesity”. Her journey from fat to fit has included her struggles with various diets, damaging her knees when she took up running while weighing 90 kg as a student in the UK, and finally a journey of self discovery and recovery, where she took charge of her cooking and lived on a smoothie (a “big one”) for breakfast, an apple and water for lunch, and “my style” of Thai curry (with lots of veggies) for dinner at 6 pm for two years, walking everywhere and socialising only with fit friends.

Even when she got married to Telugu film actor Ram Charan Konidela in 2012, son of actor Chiranjeevi, Konidela says she was mocked and trolled on social media for her weight. “I was 15 kg more than what I weigh today,” she says. “But there were people saying, ‘How can Ram Charan marry a fat girl?’”

Given these travails, I am pretty certain that my guest is going to be a picky eater. What she picks, however, leaves me surprised. When I suggest a few dishes, she first politely leaves it all to me, and then in an endearing burst of spontaneity says, “Let’s just sample them all.” For a food writer, it’s the perfect plan. So we land up with an array of dishes on our table: Seb Zameeni, a beet and potato faux kebab (which turns out to be more ‘tikki’ than self-respecting kebab), an excellent Murgh Khatai Shikanja (cooked in an indigenous iron ‘claw’ over charcoal, a recipe that reminds you of its more famous Hyderabadi cousin, Pathar ka Gosht, cooked on hot Deccan stone), Kakori Kebab that Dum Pukht does best, a Begum’s Fish Qaliya competent in its Deccani spices, Dum ka Murgh that mimics a Lucknowi mussalam or whole chicken preparation, Baghare Baigan and, of course, the Kachchi Biryani. For the record, my guest tastes them all, even if it’s just a spoonful of each.

“Food and fitness are so linked,” she warms up. “As part of my company Apollo Life, we did a study across various corporate canteens to map employee productivity as linked to meals, and found that people’s productivity dips between 2 and 4 pm. That is because the lunch served in most office canteens is unhealthy. Food that is good for you should make you feel energetic, not lethargic.” Apollo Life aims to manage the well-being of the urban Indian workforce through a network of fitness centres, wellness app (in collaboration with wellness guru Deepak Chopra) and other online and offline programmes.

While Apollo Life has within its ambit a string of holistic ‘occupational health centres’ (with sports, mental fitness and more included) within corporate spaces, there are other experiments afoot. A pilot project to revamp canteen food is underway within the Apollo Hospital campus in Hyderabad, by way of The Garden Café. This is where Konidela has not just been developing healthy recipes for everything from biryani (made with brown rice) to pancakes (made with oats), but also trying backward integration, where all ingredients used are organic and their provenance is established.

“ “Food and fitness are so linked... Food that is good for you should make you feel energetic, not lethargic.” - Upasna Konidela, vice chairperson, CSR, Apollo Foundation

The idea is to source these directly from farmers, and encourage them to grow better food. While this is still in incubation, and the café is primarily frequented by hospital staff, some patients, and users of Apollo Life fitness centres, the larger idea is to eventually have such cafés across all Apollo Hospitals and within other corporate offices too, says Konidela. “I don’t want to be just doing retail. I want to work with food science and farmers at a much larger level.”

As head of Apollo’s CSR arm, she is doing this with another pilot project in “thatha’s [grandfather’s] village”— Aragonda, in Chittoor district of Andhra Pradesh. Twenty anganwadis (mother and child centres) within an administrative block have been adopted and nutritious food provided, in addition to what the government supplies. Local farmers are being encouraged to grow these nutritious local grains and vegetables, which are then bought by Apollo and supplied to the anganwadis in a model, where the investment for a year is ₹1 crore to ₹2 crore. 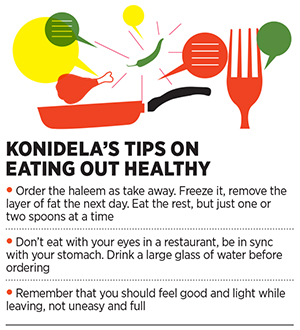 “Like my grandfather, I believe in investing in socialist businesses that can impact a large section of society,” says Konidela. “Food science and wellness are both capable of doing that. Older entrepreneurs in Andhra Pradesh bought land, but now, the younger generation is looking to invest in startups that have large impact.”

Finally, tonight’s piece de resistance—the biryani—is on our table. Like the best-known Hyderabadi version, this one is a Kachchi Biryani, where meat and rice are cooked together in stock or akhni (a Deccani corruption of yakhni, meaning meat stock). The Hyderabadi biryani is different from Avadh’s pucci biryani, where meat and rice are cooked separately and then layered and steamed on dum. The Dum Pukht version is flavourful without being overpowered by the potli masala most Hyderabadi biryani variants use; it is moist, the meat cooked perfectly.

“The best biryani was my grandmother’s [a more robust Andhra style made by Sucharitha Reddy, Prathap C Reddy’s wife],” my guest says nostalgically. “Or is to be found at my friend Shaaz Mehmood’s house,” she adds, talking about another well-known young entrepreneur from an old Hyderabadi family, before enthusiastically inviting me to sample the food on the film set of a production starring her husband. “Film producers in South India take pride in the food served on their sets. There is a healthy rivalry between big productions, based on whether there are two or three non-vegetarian dishes served at lunch for the entire unit,” says Konidela. “Our productions [father-in-law Chiranjeevi’s] have some of the best food.”

It’s an offer we will take up another day. For now, we’ve had our fill. Though, as it turns out, Konidela is on her way to another sojourn: A midnight Ramzan drive with her staff, where she will teach them to eat street food healthily. “How do you do that?” I ask, before we say goodbye. “Just a spoonful… no more,” she says, and waves.