Instead of nurturing the spirit of debate, we have become aggressive, bigoted and abusive 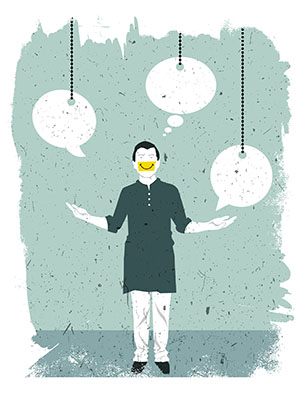 In 1999, the BJP-led National Democratic Alliance honoured the scholar, economist, and philosopher Amartya Sen with India’s highest honour, the Bharat Ratna, a year after his Nobel Prize. One of Sen’s more interesting books is The Argumentative Indian (2006), celebrating our propensity to challenge views we disagree with. Indians argue with one another, he says, and from those dynamic encounters new ideas synthesising different viewpoints emerge, making unity in diversity possible in this complicated nation.

In July this year, in response to a question from a journalist, Sen said he would not support Narendra Modi, Gujarat’s chief minister, to be India’s Prime Minister; he believes Modi fails the secularism test, which he sees as a necessary precondition to govern a country as diverse as India.

Insults came thick and fast from some of Modi’s supporters, some saying Sen had no right to express views on Indian politics (he remains an Indian citizen, although he has spent the bulk of his life abroad). Photographs emerged on the internet of a partly-clad young woman, purportedly Sen’s daughter Nandana, an actress. Sen was admonished to control his daughter before telling India who should govern the country. The photograph went viral, appearing on websites supporting the BJP. The BJP distanced itself somewhat from the insults, but one of its parliamentarians, Chandan Mitra (who edits the newspaper The Pioneer) said on Twitter: “Next NDA Government must strip him of Bharat Ratna.” Sen agreed to return the honour if Atal Bihari Vajpayee, under whose tenure Sen was honoured, were to demand its return. A day later, Mitra, who has a PhD from Oxford, expressed his regrets, particularly after the intellectual class turned against him.

From Mitra’s perspective, once you are honoured by the state, you cannot question its politics. The intolerance that lies at the heart of Mitra’s intervention is actually as much of a fundamental Indian trait as is our argumentativeness. And it is depressing.

Online anonymity allows many to take potshots at people whose views they disagree with. I happen to agree with Sen on his view regarding Modi, and as a result I’ve received occasionally creative and amusing, but often annoying, abusive and personal insults on Twitter. I don’t block them—that would give them the standing they don’t deserve—but I use fresh ones to embellish my Twitter bio (@saliltripathi), because their invective reveals more about their poor upbringing, and the kind of company they keep, than it says anything about me. But other journalists have felt offended: I understand Rajdeep Sardesai withdrew briefly from Twitter, and Sagarika Ghose wrote an op-ed criticising those she felt had insulted her. There is a point to Ghose’s complaint: There is definitely some misogyny involved in such insults, but that is a broader problem with the internet, where anonymity emboldens uncivil men to make the kind of remarks they would not make had their identities been known. (But being rude is not the monopoly of men.)

We like an argument, provided we get the last word and we are winning. But those who challenge or question us: Well, they shouldn’t be allowed to. Not argumentative then, but aggressive, assertive, intolerant, abusive. Instead of vaad-vivaad or tark-vitark, the spirit of debate based on reason, India has become the land of jiski lathi, uski bhains (the one who owns the stick, owns the buffalo). We drive the opponent away by shouting louder and vitiating the atmosphere.

This affects every sphere. Take politics: The Hindu nationalist right has many scalps to its credit, such as hounding the painter MF Husain out of India, to die abroad in exile; marching against the publication of the works of BR Ambedkar, who drafted India’s constitution; attacking art galleries; and banning books, most recently Joseph Lelyveld’s biography of Gandhi, and Jaswant Singh’s biography of Jinnah (both bans by the Modi administration).

But let not that lull you into thinking that the Congress champions free speech. That party earned for India the dubious honour of becoming the first country to take action against Salman Rushdie’s 1988 novel, The Satanic Verses; a Congress government banned its import, and a quarter century later, another pleaded helplessness when Rushdie could not attend the Jaipur Literature Festival after a fictitious death threat surfaced against him. Congress governments have banned books by Aubrey C Menen and Stanley Wolpert in the past, and the English translation of a Spanish novel about Sonia Gandhi has not been imported into India, because its publishers fear legal trouble. In late July, the Congress’s students’ wing forced a Mumbai restaurant called Aditi to close, because at the bottom of each bill the restaurant manager printed a message, condemning a new tax. The restaurant re-opened after the offending lines were removed from future bills. Kapil Sibal, Minister for Information and Technology, produces laughable lists of websites that he’d like banned, because they blaspheme religions or insult political leaders.

The Left does little better. In 2003, a Communist government in West Bengal banned Dwikhandito (Split in Two), Taslima Nasreen’s memoir, because of fears that it might stoke religious violence. And it isn’t only about Hindus and Muslims: Christian activists destroyed copies of The Da Vinci Code in a bookstore in Kolkata, and seven states initially banned the film.

The sad reality is that Indians don’t appear to mind such restrictions. The bogey of potential violence is so successful, most people think the government is right in acquiescing with those who claim they are offended instead of protecting those who wish to speak freely.

The law backs them. Even though the Constitution’s Article 19(1)(a) grants all citizens the right to “freedom of speech and expression”, it also places “reasonable restrictions” on that right, and those restrictions are a grab-bag of concerns, including the interests of the sovereignty and integrity of India, the security of the State, friendly relations with foreign states, public order, decency or morality, or in relation to contempt of court, defamation, or incitement to an offence.

This is an absurdly long list; as Behram Contractor, the gifted columnist who also wrote under the pseudonym Busybee, said about the Emergency of 1975-77, the only safe topics left were cricket and mangoes.

Today, anyone who feels offended can complain to restrict the offender’s right to express herself under Section 153(A), saying that the speaker is “promoting enmity between different groups on grounds of religion, race, place of birth, residence, language, etc”, and doing acts prejudicial to maintain harmony. And the state has made it a criminal offence to “outrage religious feelings” with malicious intent under Section 295(A).

Some perspective here: That code was drawn up in 1860, soon after the 1857 War of Independence, after which the British Government took over India’s governance from the East India Company. Laws meant to control “subjects” are now being used to disempower citizens.

Sections 295(A) and 153(A)—and now Section 66(A) of the Information Technology Act, under which someone giving offence through an email or through any online activity can be jailed for up to three years—have provided busybodies of all hues the chance to claim offence and seek curbs on writers, artistes, actors, film-makers, and others they don’t agree with. Remember the professor who sent cartoons critical of West Bengal Chief Minister Mamata Banerjee? Or the young woman who clicked ‘Like’ on Facebook when her friend criticised the enforced bandh that followed Bal Thackeray’s death? Arrests were prompt. At least in the Maharashtra case the overzealous police were disciplined. Otherwise, state hypersensitivity remains the norm. Quis custodiet ipsos custodes?

The moment someone claims offence, the State forces the one who speaks to swallow her words. Adults are suddenly seen as vulnerable infants and the State becomes the nanny.

And earlier this month in Chennai, a text message purportedly from the city’s police to the University of Madras said it should cancel a planned lecture by Amina Wadud, an American scholar of Islam, because of fear of violence. But the police said they weren’t aware of such a message. Who sent it?

This is similar to what happened in Kolkata earlier this year, when Rushdie was invited, but the city’s police played a dubious role by informing Muslim groups of his likely presence, and then warning the organisers that they should think again about inviting him, shirking their obligation to protect free speech. Note the pattern: The authority engineers a situation where it doesn’t have to formally ban anything; expecting the organisers to use their good sense and call off the event.

This creates a culture of fear, not a mind without fear. It forces obedience and compliance; it does not spur imagination, nor nurture a spirit of inquiry. It breeds a culture of conformity, not creativity. And so we learn to argue only within our minds, confide with a few, keeping our head down.

In an Irani restaurant, as Nissim Ezekiel showed us in his poems, and Rushdie in his fiction, the surly owner would place a list of taboo topics his patrons are banned from discussing: No religion, no politics. The owner’s father’s portrait growls at you as you quietly dunk your bun maska in cutting chai, uncertain if it is safe to talk.

At such times, the heaven of freedom in which Rabindranath Tagore wanted this country to awake, seems very far.

Get the latest stories, videos, and podcasts from Forbes India directly in your inbox every Saturday
Thank you for your comment, we value your opinion and the time you took to write to us!
Comments 19

Tweets by @forbesindia
VC Firm First Round Capital on Funding Student Startups
Keki Mistry: How to Rescue the Government-Business Equation