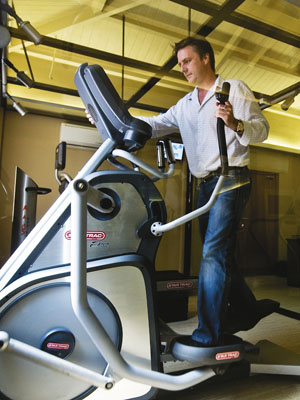 The heart-rate monitor shows my heart cantering at 100 beats a minute. But my body is absolutely still. A minute ago, it was a sedate 74 beats a minute. The glass chamber I am in is filled with ambient light; it appears no different from the air-conditioned room that envelopes the chamber. Catherine Zeta Jones isn’t anywhere close by. Jason from Friday the 13th too is not to be seen. What could these dark and invisible forces be that fill the heart with trepidation and force it to palpitate so?

But now I’m on the elliptical training machine. As my feet and hands move in a slow rhythm, the heart-rate monitor has more alarming news: The amount of oxygen in my blood-stream has dropped from a normal of 94-97 percent to about 88-90 percent, and my heart is now racing at 130 beats a minute.
A little ahead is the danger zone. If the oxygen level continues to drop then delirium will set in. Each cell will clamour for oxygen the way flood victims do before a food-carrying helicopter.
Already my heart is straining at the leash even though my body is simply cruising on the elliptical trainer. The spooky bit is that there is no sweat. There are no visible signs of physical strain but it feels like a nice work-out. Whoever said there is no free lunch, didn’t know about high-altitude training.
Vouching For It
Outside the chamber is John Gloster, former physio to the Indian cricket team. And I’m trying out the product that his company, Altitude Training Systems (ATS) sells, that simulates “thin mountain air” conditions at humid sea level. And the explanation for what my heart is going through is simple: “Less oxygen in the air inside the chamber.” He is reassuring about those oxygen levels. “About 88 percent is where we will let you be. Not beyond that.”
Robbie McEwen, the Tour De France winner who will be participating in the BSA Hercules Cyclothon in Mumbai on February 21, uses this training system. Shane Watson, who is doing a great job for Australia and Rajasthan Royals as a match-winning all-rounder, is hooked to this method. Stephanie Rice, who won three gold medals, at the Beijing Olympics in 2008, also has high-altitude training as a part of her regimen.
They, and other athletes the world over, are taking a shine to this method because of the belief that people who practice at high altitudes can use oxygen more efficiently and their muscles tire later than athletes who have trained in normal oxygen conditions.
Why does altitude training work? The first thing it does is make the energy production in the body more efficient. This is how it happens.
The Process
The human body during physical activity needs ATP (adenosine triphosphate) the way a teenager in a mall needs cash. ATP has energy rich bonds that, when broken, release energy for the body. Now assume that the physical activity in question is running a marathon. As the runner starts off each cell in the body uses existing ATP to create energy. The problem is that the body runs out of existing stock of ATP in 10-12 seconds. That’s like our teenager buying his first pair of jeans in the mall with all the cash in his wallet. As the run continues the body now raids the glycogen store inside each cell. It breaks down glycogen into glucose, which it uses to make ATP. This process is slightly more time consuming as it takes almost 12 chemical reactions to generate ATP this way. If the teenager in the mall wants to buy an expensive bag or sneakers, cash can be withdrawn from the ATM in the mall but wading through the queue will be time consuming. Even this glycogen process runs its course in 2 minutes or so. Remember that all this happens without drawing on the oxygen in the lungs.
As the run goes beyond 2 kilometres or so, the body now realises that much more ATP will be needed and starts using any oxygen it can find. It draws energy from glycogen and fat in the liver through oxygen-dependent reactions.
Now this process is even more time consuming, but produces huge amounts of ATP. This is like the teenager visiting a bank to withdraw cash. The queue at the cashier is long but very large amounts of cash can be withdrawn. The reaction of oxygen with glucose from glycogen produces 36 molecules of ATP and in the case of fatty acids it produces 130 molecules of ATP. Without oxygen it can only produce 2 ATP molecules! 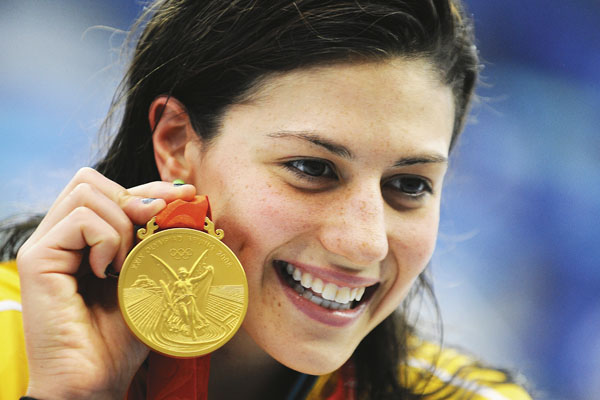 
When athletes train at high altitude, they experience low oxygen levels. That means less oxygen is reaching each cell. To counteract this problem the body starts producing more red blood cells, the body’s magnets for oxygen. As the red blood cells quantity goes up, they mop up every tiny bit of oxygen that is coming into the lungs. The lungs also undergo change to bring more oxygen into the lungs. Each of their 300 million alveoli that pull oxygen out from the air we breathe grows bigger. The larger the alveoli, the greater the chance of grabbing whatever little oxygen is coming through that “thin mountain air.” The heart too starts beating faster to deliver more oxygen to the cells.

The Benefits
Now, imagine what would happen when the athlete goes back to normal oxygen levels: Larger alveoli and more oxygen-carrying red cells mean that the heart doesn’t have to work very hard to deliver oxygen and produce energy in each cell. And there’s one more benefit when the red blood cell count goes up: The body is able to delay the build-up of lactic acid — which is secreted when we exert ourselves, and makes our muscles sore and fatigued — and is therefore able to continue physical activity for a longer duration. Now you know why Kenyan runners, who are all altitude-trained, look ready to hit the dance floor after completing a marathon, while the rest of us want medical attention!
Now to tell you the truth, all this can be achieved through some heavy-duty endurance training even at sea-level. So why do altitude training? “Because you don’t have to train that hard,” says Gloster. A 30- to 35-minute gentle work-out on a treadmill in a high-altitude environment is the equivalent of running like the hounds of hell are after you, at sea level.
This is why it is perfect even for those people who are recovering from an injury. Shane Watson’s career till the first IPL was marred by a series of injuries. When Watson got a chance to play for Rajasthan Royals he had already started using a portable high-altitude system. He played 15 games on a trot in that season. He is now one of the most valuable players for Australia, and has played for almost three years now without any major injury. “Shane travels with the system wherever he goes,” says Gloster.
You Can Do It Too
This training system is not only for athletes. Dharmil Bodani, a 40-year-old businessman, has diabetes. “My fasting blood sugar used to be 135 or so,” he says. Six months ago he was advised to use the system. “I didn’t pay any attention then. Then one day out of curiosity I decided to check out the experience,” he says. The idea of a light work-out appealed to him. “Over the past six months I have got a level when I train at oxygen level of 85 percent, and a 35-minute work-out gives me the same result as 75 minutes of normal exercise,” says Bodani. He says he has not changed his dietary habits too much. “My fasting blood sugar is now around 100,” he says.
People who have used the system also say that they feel calmer. Now that might be subjective, but Victor Popov, who is the chief physiotherapist for Australian Swimming and cycling teams, says it is because the resting or normal heart rate is lowered. “An endurance sportsperson from the Middle-East who has used this system found his resting heart rate drop from 62 to 53,” he says. The calmer the heart, the calmer the mind, and hence better the performance.
The only danger with this system is trying to work out too hard. And people with any pulmonary or cardiac conditions must consult with a physician prior to high altitude training. The other thing to watch out is that performance increase is gradual. But if someone were to be consistent then clearly this is one case where the mountain air can come to Mohammed.
Work Out Smarter
● A Light workout in a high-altitude simulator is equivalent to a high intensity workout of double the time duration. This allows people with medical conditions to remain fit without much strain.

● The simulator has low oxygen levels so the lungs increase their surface area to grab as much oxygen as possible. The heart beats faster to pump oxygen more frequently. When the body goes back to normal oxygen conditions the heart and the lung don’t have to work too hard.

● Shane Watson, the Australian all-rounder, owes much of his injury-free condition over the last three years to High-altitude Simulator training. Robbie McEwen, winner of 12-stages at Tour De France and a participant in the Mumbai Cyclothon, too has used the simulator while recovering from injury.

● Heavy workouts (more than 30 minutes at a stretch) in the simulator should be avoided, unless it is being done under professional guidance.
(Altitude Training Systems' John Gloster e-mail is: john.gloster@id-sports.in)