I would rather be remembered as an author, social worker: Sudha Murty

In the first of a series of excerpts from Gunjan Jain's book 'She Walks, She Leads', the author speaks to Sudha Murty, chairperson of the Infosys Foundation 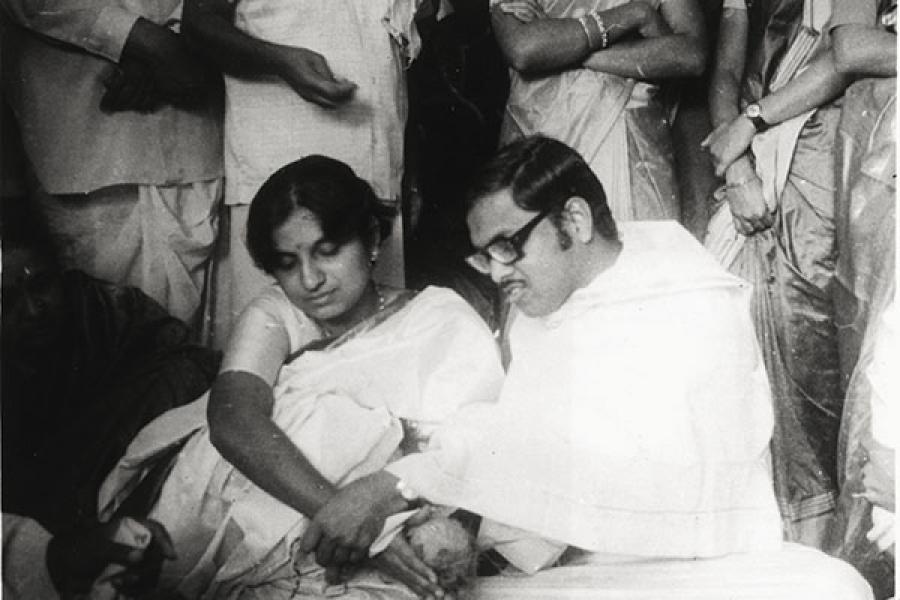 Mrs Murty is many things... She is a great seeker, incurable dreamer, tireless doer, passionate teacher, eternal student, storyteller, story lover, selfless giver, childlike life enthusiast, engineer, homemaker... and so very human. But above all, she is an inventor... a leader... because she is inventing the future of those at the fringes of survival in India, slowly changing their what-is to what-could-be.

—Vishal Sikka
On a warm April afternoon in 1974, at the Indian Institute of Science, Bangalore, a student chanced upon an advertisement by Telco (Tata Engineering and Locomotive Company; today Tata Motors) for a junior engineer. Her attention, however, was drawn to the disclaimer: Lady candidates need not apply.

Sudha Kulkarni felt the advertisement seemed to mock her achievements as an engineering graduate and gold medallist from Hubli and her history of being the only woman student on two all-male campuses. That it came from as reputed a company as the Tatas fuelled her ire and she shot off a postcard to JRD Tata, lecturing him on gender equality. A few days later she received an interview call from Telco.

As I negotiate the Bangalore traffic en route to Infosys Foundation, I ponder over the rare quality that distinguishes this pioneer—her intentions are as peerless as her actions. Sudha is a visionary who has taken tough decisions and set both benchmarks and an example throughout her life: Not only does she do, but she thinks very carefully about why, and then articulates that philosophy to the world.

Walking into Sudha’s third-floor office a spark of that spunky young woman still glows in the warm smile of the charming lady, in a pretty cotton sari, who greets me. Sudha’s office is functional but welcoming, stationery stacked neatly on the desk. Tata Group Founder Jamsetji Nusserwanji Tata looks out from a frame beside one of JRD. Sudha’s only accessories are a small bindi and simple mangalsutra; her grey hair is tied back neatly, adorned with a solitary fresh flower. She looks exactly as she does in every photograph and reminds me of what fashion designer Coco Chanel said—‘Simplicity is the keynote of all true elegance’.

Early into our meeting, I realise that Sudha is curious and astute, albeit polite. Aware of her reputation of being thorough with her research, I am not surprised when she asks me everything about my book before she begins the interview. After my answers to her frank questions satisfy her, she settles back and speaks with the skill of a practised raconteur. Just as after a good book one feels like the author is an old friend, listening to Sudha narrate her life makes me fight the urge to give her a hug.

The Student Life
Sudha, the second of four siblings, was born in Shiggaon, Karnataka, to Dr RH Kulkarni, a professor of gynaecology, and Vimla, a homemaker. Hers is a family that respects education and erudition. “My father didn’t buy a refrigerator for years, but our library was vast. For us, academics were not only a priority but a way of life.”

Sudha studied engineering in the late-’60s, when it was an unheard-of vocation for women. Apart from being stared at constantly, she had to walk a mile just to find a washroom she could use. With characteristic cheerfulness and scrappiness, she crossed those hurdles and now chooses to remember that time as idyllic. It was hard work, however. Driven by her desire to prove her mettle and silence the patriarchal voices that dogged her, Sudha graduated top of her class.

Buoyed by that success, she decided to pursue a postgraduate degree in computer science. Again, at the Indian Institute of Science, she was the only girl in class; Sudha eventually graduated as a topper, the recipient of a gold medal from the Institute of Engineers and a silver medal from the Karnataka government.

At Telco, the panel that interviewed her told her that while her academic record was impressive, she may be better suited to a research job, rather than one on a factory floor. “I replied that they had to start somewhere, else no woman would ever work in their factories,” she tells me. Sudha got the job and moved from Bangalore to Pune.

The Unconventional Bride
The job that Sudha had never coveted led her to the man she eventually married. When I ask Sudha about Murthy, she blushes at the memory of how they met. They had a common friend who worked in Telco, from whom Sudha often borrowed books; several of these bore the signature of NR Narayana Murthy. “In my mind’s eye I pictured Murthy as someone bold and confident, but when we eventually met he turned out to be a shy, soft-spoken introvert. We started meeting regularly as part of a group and much later alone.”

The proposal when it came was as unusual and original as the couple. One day, when the two were in a rickshaw rattling through the streets of Pune, Murthy turned to Sudha and solemnly declared, “I am 5 feet 4 inches tall. I come from a lower middle-class family. I can never be rich. You are beautiful and intelligent. You can get anyone you want. But will you marry me?”

Sudha and Murthy have dissimilar personalities, with a common passion for books. Sudha is an extrovert who loves travelling and Indian classical music; Murthy prefers being home and enjoys Western classical music. So is it a classic case of opposites attracted to one another, I ask Sudha, who replies with a smile, “We are opposites that complement each other. He is an introvert, but is romantic and sensitive, too. The inscriptions in the books that he presents me with, always say From Me to You or To the person I most admire.”

The Seed Investor
The idea of Infosys was birthed on a cold day in January in 1981 by Murthy and six of his software engineer colleagues in the Murthys’ house in Pune. Six months later, it was registered as a private limited company, with startup capital provided by Sudha.

While she is modest, Rohan underscores his mother’s immense contribution: “Without my mother’s support I am quite confident that my father would not be very successful. I have seen in transaction after transaction, in event after event, that my mother is the backbone for my father, Infosys, our family. The lesson that I have learnt is that without such support it is impossible for anybody to build anything.”

Given her own brilliance, I ask how Sudha feels about being known as Narayana Murthy’s wife; her cheerful reply is—“I would rather be remembered as an author and social worker than the wife of a billionaire business tycoon.” In fact, she spells the family name differently because she was told that the ‘h’ is unnecessary.

Over the years, Sudha has been very clear that she is her own person—a woman who plays various roles but who refuses to be told who she ought to be.

I set out to meet Sudha Murty because I wanted to understand what compels her to lead the extraordinary life she does. I get my answer when she says to me—“It was destiny that Murthy and I were chosen to be successful and wealthy. We are trustees of this wealth and it is meant to be used in a fruitful manner.” Sudha’s personal and professional lives—as also that of her family—are guided by a spiritual compass, and reflect the thoughts of Lao Tzu, the Chinese philosopher-poet who said, “I have just three things to teach: Simplicity, patience, compassion.

These three are your greatest treasures.”