For years, the watch was presumed lost. Then it was destroyed in a fire--until it wasn't. Now the King of Cool's timepiece has re-emerged and will go up for auction in October. The secret history of a grail watch 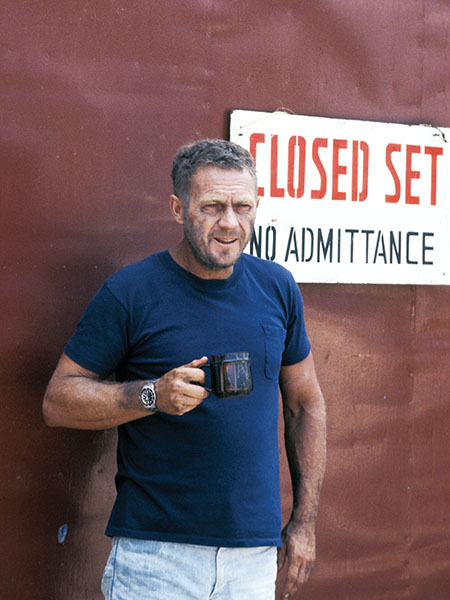 The great escapement: Steve McQueen during the making of Papillon, wearing his Rolex Submariner
Image: Ron Galella/ Wireimage via Gettyimages
For more than half a century, Steve McQueen and Paul Newman have been cosmic twins of masculinity. Box office rivals throughout the ’60s ’70s—they would have starred in Butch Cassidy and the Sundance Kid but couldn’t agree on who would receive top billing—the actors were also revered for their offscreen passions: Racing cars, riding motorcycles and collecting watches. Years after their deaths—McQueen died at 50 in 1980, while Newman passed away in 2008 at 83—the two men still regularly compete over the ever-escalating prices of their memorabilia.

Last October, Paul Newman’s 1968 Rolex Daytona—with a white-and-red ‘exotic’ dial that came to be known as the Paul Newman Daytona simply because he wore it—sold at Phillips auction house in New York for an astonishing $17.8 million. The price was not only a record for a Rolex at auction but also the highest amount ever paid for a wristwatch at auction.

More than a year before the gavel came down on Paul Newman’s Paul Newman, Michael Eisenberg, a Beverly Hills real estate broker and developer who is also a prominent memorabilia collector, was privately negotiating with the consignor of the Daytona, a deal that would have kept it from ever going on the block. “I really wanted to buy it,” Eisenberg, 53, recalls. “I had the money, but obviously it wasn’t anywhere near the money the watch sold for.”

He also soon began a quest for another so-called grail watch—one owned by McQueen. “The idea was to join the two watches—then I’d have Butch and Sundance,” says Eisenberg. “And I would never sell them. I’d tour them and put them on display.”

The watch Eisenberg sought, however, wasn’t the one for which McQueen is best known—a Heuer Monaco, which was actually just a prop for his 1971 racing movie, Le Mans. But the McQueen mystique has made that timepiece a classic and collectible for decades. In 2012, a Monaco he wore in the film sold at auction for nearly $800,000. Offscreen, McQueen was frequently photographed wearing his actual watch: A ref 5513 Rolex Submariner, circa 1964. Now Phillips will bring that watch to auction on October 25 in New York. 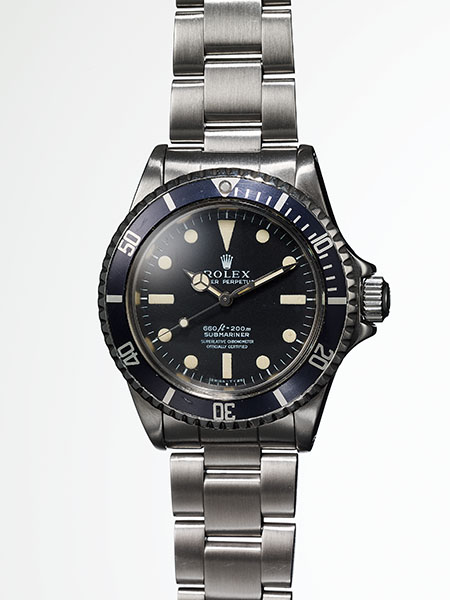 Hammer time: Can McQueen’s Submariner eclipse the $17.8 million auction price of Paul Newman’s Rolex Daytona?
Like the Newman watch, McQueen’s Submariner has a fascinating history, one that combines elements from two of his most famous movies, The Great Escape and The Towering Inferno, and even involves a stuntman. He bought the watch in the mid-1960s, when it would have cost around $250, and also owned another model, a ref 5512 Submariner from 1967 that brought $234,000 at an Antiquorum auction in 2009.

Some time in the late 1970s, McQueen gave the older Submariner to his favourite stunt double, Loren Janes. The pair had been working together since 1958, when McQueen was making the TV series Wanted: Dead or Alive. Over the next two decades, in 19 movies—including Bullitt, The Getaway and The Thomas Crown Affair—Janes performed some of McQueen’s most memorable stunts. That iconic ten-minute car chase in Bullitt, where McQueen careens through San Francisco in a 1968 Mustang? It was actually Janes behind the wheel.

To show his gratitude for Janes’s work and friendship, McQueen also had the case back engraved—LOREN, THE BEST DAMN STUNTMAN IN THE WORLD. STEVE—making it the only known McQueen watch to bear the actor’s name.

For decades, McQueen’s watch was presumed missing, until July 2016, when the Sand Fire raged through Los Angeles for nearly two weeks. Among the 18 Canyon Country homes lost in the massive wildfire was the house in which Janes, who was suffering from Alzheimer’s, had lived with his wife since the 1990s. (He died in June 2017.) Eisenberg remembers reading a story at the time about the couple losing all their possessions, including some of Janes’s most treasured mementos: Mugs belonging to John Wayne, a knife used by Sylvester Stallone in Rambo: First Blood Part II and McQueen’s Submariner.

“I begged them to go back to the house and sift through ashes,” Eisenberg says, recalling the conversations he had with Janes’s wife and their daughter, Erika. “A few weeks later, they called me back to say they had found it.”

Now, even a Rolex that has survived that kind of holocaust cannot be expected to keep on ticking. After all, a ­Submariner was designed for deep-sea conditions—not fire. So ­Eisenberg recommended that the family take the watch to Gearys, a ­luxury boutique in Beverly Hills, to have it professionally ­restored. Gearys sent it to Rolex headquarters in New York, which miraculously brought the watch back to life, preserving the precious case back.

Upon returning the watch to Erika Janes, Rolex sent her a letter highlighting its extraordinary provenance. “The story you graciously shared with our official Rolex Jeweller,” a customer service manager wrote, “is an amazing testament to the durability of a Rolex timepiece. Your father, through his devotion to his craft, his fellow stuntmen, those for whom he daringly doubled—including his friend and gifter of his watch—Mr Steve McQueen, and of course to his family, demonstrates traits that embody true excellence. We are proud that he chooses to wear a Rolex Submariner.”

Eisenberg made the Janes family a generous offer to buy the watch—though he declines to name the amount. After fielding a few other estimates, they accepted Eisenberg’s bid; the family and Boys Republic, a charity that McQueen cared deeply about, will also receive a portion of the auction sale. 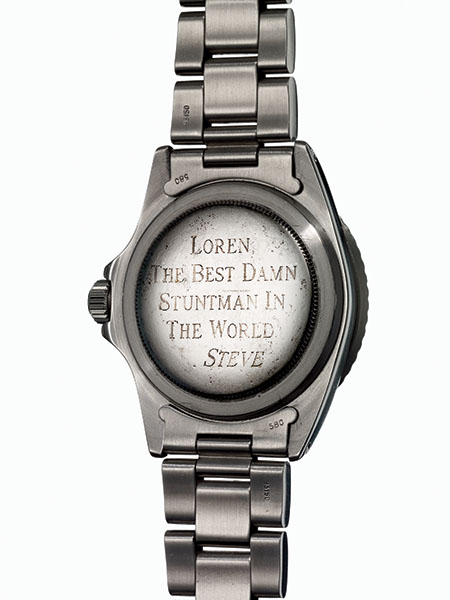 McQueen inscribed a special message for his favourite stuntsman, Loren Janes, on his Rolex Submariner
Much as Eisenberg loves collecting celebrity memorabilia—he’s owned everything from James Bond tuxedos to a Dorothy dress from The Wizard of Oz—he occasionally sells his most valuable items, usually to buy better ones. But no star has the allure of Steve McQueen when it comes to collectibility—in large part because he was seen as a man’s man who lived his movie fantasies in real life and also because of the scarcity of the cars, bikes and clothes he actually owned. “Elvis, Bogart, James Dean,” Eisenberg says, “nobody’s items have sold for the same prices. It could be 10x or 100x if it were owned by McQueen.”

The King of Cool certainly reigns among car ­collectors, who regularly pay a premium for a vehicle once owned by McQueen. In 2011, his 1970 Porsche 911S, which had a cameo in Le Mans, sold at auction for $1.38 million. (The same car without the McQueen connection would sell for around $75,000.) And last year, the 1970 Porsche 917K that took home the chequered flag in that film sold for more than $14 million at auction—a record for a Porsche.

But it’s still Newman who has the upper hand in the watch world, thanks to the Phillips auction last October. In less than five years, under the aegis of Aurel Bacs, the star auctioneer behind Phillips’s partner Bacs & Russo, and Paul Boutros, Phillips’s head of Americas and an international strategy advisor for the watch division, the auction house has become the market leader in terms of annual watch sales—$112 million in 2017, up by more than $5 million from 2016. After the record Paul Newman Daytona sale last year, Phillips shattered a few more records in May when it auctioned 32 vintage Daytonas in Geneva. All 32 lots found a buyer, and five timepieces sold for more than $1 million each. That same weekend, Phillips auctioned an Omega watch owned by Elvis for $1.8 million (a record for that brand), bringing the two-day total to more than $45 million.

With such a turbo-fuelled watch market, Eisenberg knew that he would be able to sell the McQueen Submariner almost as quickly as he bought it. “When it finally dawned on me that I was never going to own the Newman watch,” he says of his strategy to bring the Rolex to auction, “I reached out to Phillips and said, ‘I’ve got your next hero watch’.”

Boutros agreed. “He saw what we did with the Newman watch, the effort we put behind it,” he says, “because he felt like Phillips could do something special with it.” Rather than rush it to auction following the Newman frenzy, Phillips decided to wait a year. “Similar to the Newman watch, we wanted to give this timepiece the spotlight it deserves.”

The McQueen Submariner will have a low pre-sale estimate—between $300,000 and $600,000—but so did Newman’s Rolex, which was modestly expected to exceed $1 million. “My real estate background tells me that there’s more air in the bubble,” Eisenberg says of the astronomical auctions. “There’s never been so much money out there. These sale prices are like telephone numbers.”

As for the final sale price, Eisenberg doesn’t believe McQueen will surpass Newman, but he’s optimistic: “I think this firm has the ability to do that.” Besides, he notes, “it only takes two bidders” and then the “mine’s bigger” mentality takes over. “And I’m not talking about body parts—I’m talking about chequebooks."

Tweets by @forbesindia
The vibrant and sophisticated style of Bombay Art Deco
Financial feat: Boots of worth