Of the many facets of the theatre actor, it's her beguiling duality that has defined her work 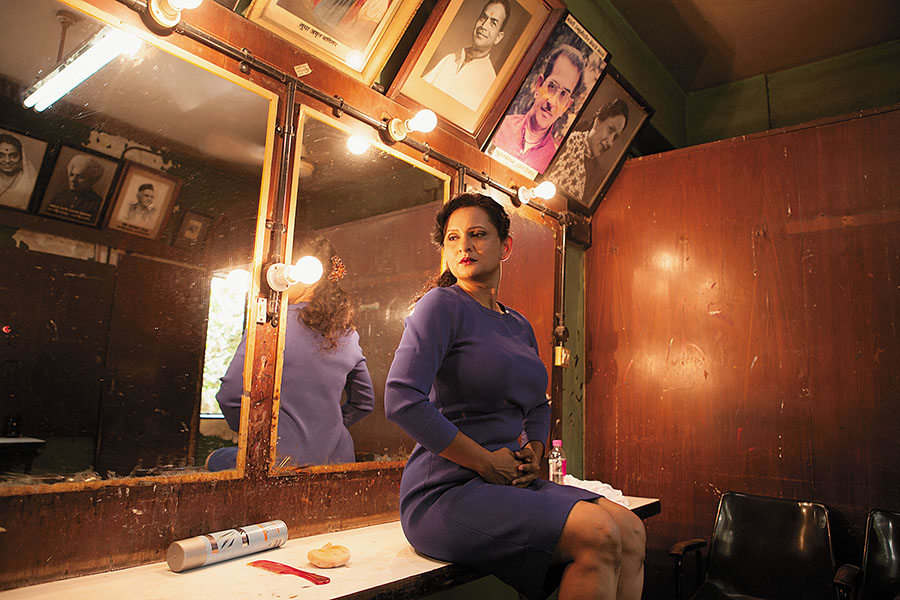 Kulkarni does continue to allow herself the reserves of vulnerability that help her essay parts with sensitivity and conviction
Photographs: Punit Reddy
The sleight of hand of theatre allows even the most unassuming of personas to transform into veritable powerhouses on stage. This is particularly true of Geetanjali Kulkarni, the immensely gifted stage actor who has, over 20 long years, chalked up an indelible identity for herself in Mumbai and beyond. Able to inhabit with great verisimilitude the twin faces of comedy and tribulation, of clown and thespian, Kulkarni constantly exhibits a beguiling duality. Her straddling of disparate worlds, philosophies and identities has been an essential feature of her career from its very beginning.

Starting out, Kulkarni had acted in several collegiate one-act plays, but she soon came to believe that she did not possess the natural confidence of seasoned actors. Yet, the world of rehearsals and simulations intrigued her like nothing else. “I simply loved the process. I remember really wanting to learn this art,” she says, of the motivation that would propel her towards a three-year programme at the National School of Drama (NSD). Kulkarni feels it is the honesty of purpose she exhibited in her application interview that secured her admission, despite her inexperience.

More than just a calling card for the future, the spell of the premier institution left an indelible mark on the budding actor. “In many ways, it could be termed as my rebirth as a person,” she remembers. She looks back fondly at several aspects of NSD’s curriculum: Scholarships for everyone, exams in which reference books were openly allowed, a flexible ‘no failure’ system. Inspirational teachers like Vibha Joshi, Robin Das or Anuradha Kapur immeasurably enriched her burgeoning world view. 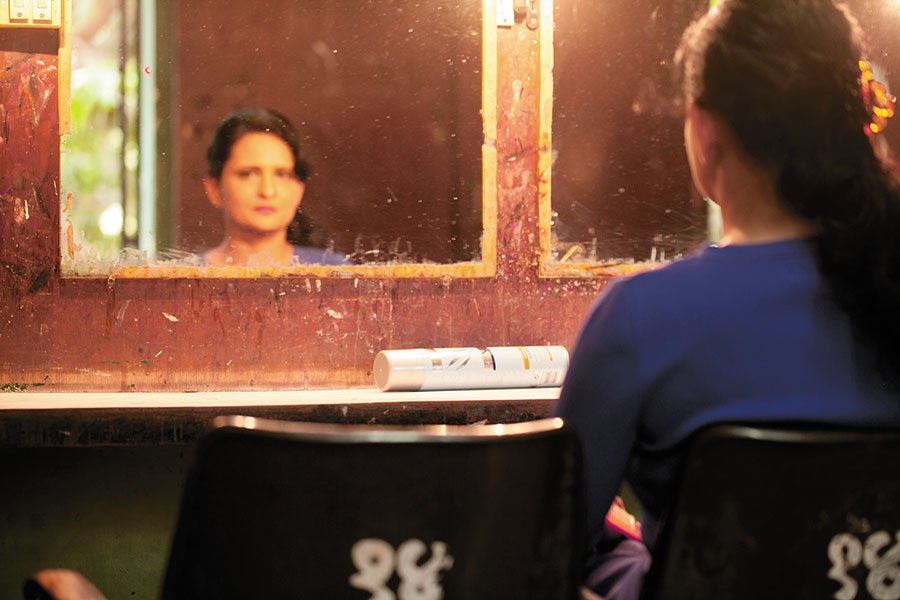 The multi-faceted Kulkarni is now a far cry from the under-confident ingénue that once hesitatingly stepped onto the stage
Kulkarni graduated from NSD in 1996. It was a batch that included now-accomplished names like Swanand Kirkire and Nawazuddin Siddiqui. One of her earliest stage assignments was with Awishkar, the group founded by Sulabha and Arvind Deshpande; it specialised in offbeat theatre as opposed to more crowd-friendly and artistically derided commercial fare. She was part of a 25-strong ensemble in Girish Patke’s production based on the provocative poetry of Marathi litterateur Vasant Abaji Dahake. Fresh out of drama school, Kulkarni’s initiation into the world of professional theatre was both unexacting and uneventful.

It was when she was enlisted to act in a Marathi adaptation of Federico García Lorca’s The House of Bernarda Alba that Kulkarni was faced with a crisis of faith. Lorca’s classic has been performed in almost every Indian language, with Vijaya Mehta’s Hamida Bai Ki Kothi (1987) and Govind Nihalani’s Rukmavati Ki Haveli (1991) being definitive adaptations. The new production, Wada Bhavani Aaicha, based on Manasi Kanekar’s Marathi adaptation, was directed by Jayadev Hattangadi and opened at the Prithvi Theatre Festival in 1999.

With great candour, Kulkarni remarks, “It was a disaster for me and I realised I didn’t know anything.” All the exposure to the performing arts at NSD had not equipped her with the requisite tools an actor might need to express her imaginative faculty, which is what is called the actor’s craft. Not having had a true mentor among her teachers meant that, though a ‘trained’ actor, the journey towards acquiring her instruments of expression still lay ahead. What was, and remains, aspirational for Kulkarni is the felicity with which folk performers, like the lavani exponent Shakuntala Nagarkar, inhabit their guileless performative personas, marked with a rawness of expression that is innately truthful.

Kulkarni was soon to find a lifelong guide in director Paresh Mokashi during the making of his directorial debut Sangeet Debuchya Mulee. Apart from his personal outlook, which was both culturally rooted and progressive, he was able to identify and nurture Kulkarni’s distinct qualities as a performer. “He truly understood me as a person, and gave me the tools and techniques I could apply to my process,” she says. 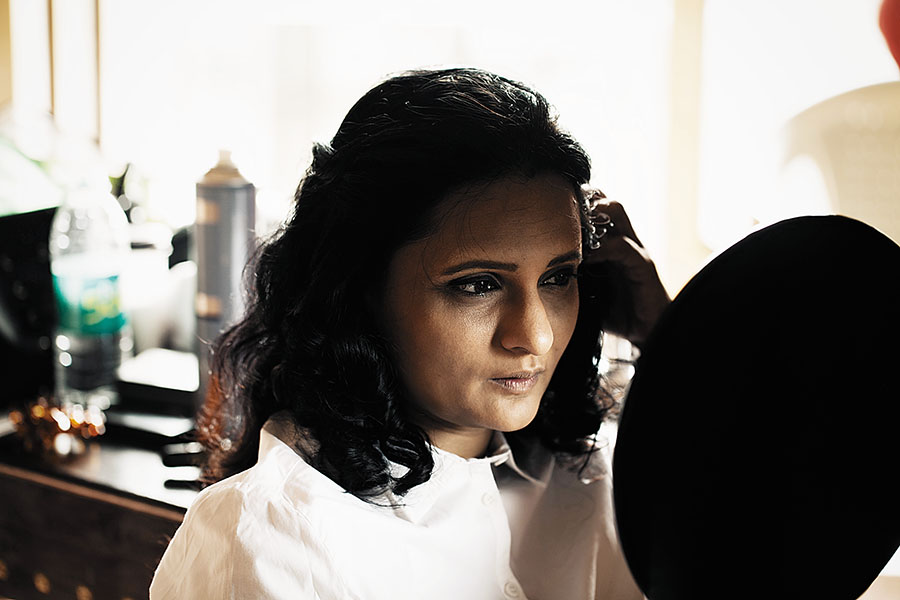 Geetanjali Kulkarni has created an indelible identity for herself in Mumbai and beyond
The play on communal harmony made extensive use of kirtans, with its vocal jousting and shared recitations, as sung by the daughters of social reformer Debuji Zhingraji Janorkar. To simulate the form’s exuberant zest, Kulkarni employed a distinctive mask—transformative expressions that allow an actor entrance onto the stage.

She would later hone these techniques on another project, Buddhibal Aani Zhabbu, directed by Patke. It was an ensemble piece on relationships, but her pièce de résistance supporting role was widely appreciated and the play went on to complete a run of more than 50 shows.

The act of ‘becoming’, so intrinsically demanded by such performances, is something Kulkarni continues to grapple with, even as a seasoned performer with a stage career that has spanned more than two decades.

In 2001, Kulkarni began an extended flirtation with Marathi commercial theatre, with its regionally entrenched ethos and whirring industrial machinery. It is a parallel theatre culture that is a law unto itself, completely unmindful of the experimental circuit or indeed, theatre in other languages. Her schooling in the Kendra Vidyalayas and her years at NSD opened her up to a diversity of cultures, absent in this domain. Of course, with the egalitarian Mokashi at the helm of her first commercial play, the long-running Mukkam Post Bombilwadi, the transition wasn’t too much of a stretch. However, in 2006, when she took up a play like Vikas Kadam’s Bai Ga Kamalach Zali, an out-and-out mindless comedy targeted at the hoi polloi, the difference of sensibilities proved particularly jarring. “I realised I couldn’t be in productions just for commercial reasons, I needed projects with the right artistic intention,” she says.

However, despite her position on the Marathi stage, Kulkarni longed for the contemporary idiom of experimental works in Hindi or English, the so-called national tongues. She finally crossed over in 2010 with Sunil Shanbag’s S*x, M*rality and Cens*rship, whose asterisked title evokes the attempts made by the powers-that-be to bowdlerise Vijay Tendulkar’s classic, Sakharam Binder.

Sinking her teeth into one of her favourite playwright’s most complex parts—albeit in the ‘play within the play’ translated into Hindi in Shanbag’s production—Kulkarni delivered one of her career-best performances. Her character, Lakshmi, was Sakharam’s battered mistress, but was able to tame his brutishness with her own parochial outlook. Playing opposite Nagesh Bhosle’s Sakharam, her intense performance won her a META award.

“Tendulkar’s text has that kind of power, that even in a rehearsal we get completely sucked in,” she explains. She credits Shanbag with helping her unravel the layers in the script: “He made me look at Lakshmi not just as an unfortunate victim, but also by understanding her sexual urges, and the fanaticism within her. She cleanses Sakharam’s soul, so to say, but when she gets that power, you see a completely different side to her.”

This new phase in her career led to collaborations with other established directors like Manav Kaul, Mohit Takalkar and Atul Kumar. With Kaul, in plays like Haath Ka Aaya… Shunya or Mamtaz Bhai Patang Waale, she submitted to the writer-director’s unique brand of small-town existential satire. In the former, she and Kumud Mishra play a couple who work arduously in keeping up appearances of domestic bliss. It is a performance of absurd proportions, with the kind of abstractions not exactly de rigueur on the Marathi stage.

In Kumar’s Piya Behrupiya, a Twelfth Night adaptation that opened at London’s Globe Theatre as part of a Shakespeare Olympics, she plays the cross-dressing Viola, giving in to masculine ostentation to great effect. Yet, in a transfiguring moment, Kulkarni lets her hair down and sings a beautiful lament, her doleful vocals suggesting not just the exertions of unrequited love but the strain of being denied her femininity.

And, with Takalkar, she performed in both the Marathi and Hindi versions of Gajab Kahani, based on José Saramago’s sprawling 2008 novel The Elephant’s Journey, on the peregrinations of an Indian elephant, Solomon, from Lisbon to Vienna in 1551—with Kulkarni taking on the part of the elephant. “I knew I would be able to get the physical aspect of playing such a character, the body language, even the dialogues, but I should be able to understand the elephant’s truth,” she says, a sentiment that is true of every part she takes up.

Recent years have seen Kulkarni make forays into cinema. She’s the ‘common woman’ in indie films like Chaitanya Tamhane’s Court, Sanjay Bhutiani’s Hotel Salvation and Rohena Gera’s Sir. Ritesh Batra’s upcoming Photograph reunites her with batchmate Siddiqui. Elsewhere, she has been responsible for steering Drama School Mumbai towards its current home at Charni Road’s Mumbai Marathi Sahitya Sangh, while helping set up a sound pedagogical curriculum aimed at creating practitioners with an astute grasp of their craft. Then, there is her NGO, Quest, which takes the joy of reading and theatre to some of Maharashtra’s most underprivileged communities.

The multi-faceted Kulkarni, now one of the theatre community’s prime movers, is a far cry from the under-confident ingénue that once hesitatingly stepped onto the stage, but she does continue to allow herself the reserves of vulnerability that help her to essay parts with a rare sensitivity and conviction.

Tweets by @forbes_india
Tale of two neighbourhoods: These London localities were home to literary greats
Regeneron's billionaire founder fights for responsible pricing. But look who's talking