For some, a car that looks and feels like any other just isn’t good enough. They spend time and money customising, tweaking, creating their own unique rides. They’re the modders 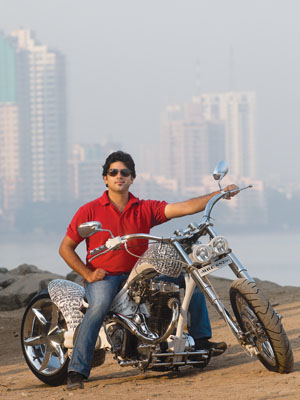 The blistering heat of the day is just about giving way to the pleasant breeze from the sea. Versova jetty, though well within Mumbai’s city limits, looks more like a small fishing village. Its lanes are narrow and potholed, auto rickshaws and two-wheelers have to honk their way through the crowd, and loud conversations are everywhere.
Until a low, rhythmic thumpathumpathumpathump cuts through the hubbub. Heads turn. And then jaws drop.

Akshai Varde is used to this. His ‘Vardenchi’ is an eye-magnet. Heck, he likes a good look at her himself. “Every time I pass a building with a glass façade, I find myself staring at my own reflection!” The Vardenchi is his modified Royal Enfield Bullet. Chopper-styled, with an extended front fork and swept-back handlebars, it is all chrome and white, with shlokas from the Hanuman Chalisa in stylised English script painted on the body. The throng of gawkers that gathers at our photo shoot is testament to his modding skills. Standing out from the crowd is what it’s all about.

At just 29, Varde is a personal brand. In 2005, he gave up his well-paid day job and decided to sweat it out in a workshop, tinkering with his Bullet. The outcome: a chopper straight out of a Harley-Davidson poster. A friend liked it, and bought it. With the money that came in, Varde began work on another Bullet. And then, another, and four years down the line, he looks back at 70 customised motorcycles. Each one unique, designed from scratch to suit an individual’s style, height and riding comfort. “It is instant fame that most people are looking for and this is an easy way to get it.”
And there’s a lot more of it on our streets these days: A Fiat Grande Punto with sporty bumpers and owl lights; a Toyota Innova with a couch, television and a refrigerator; a Yamaha RX-100 that screams like a banshee. 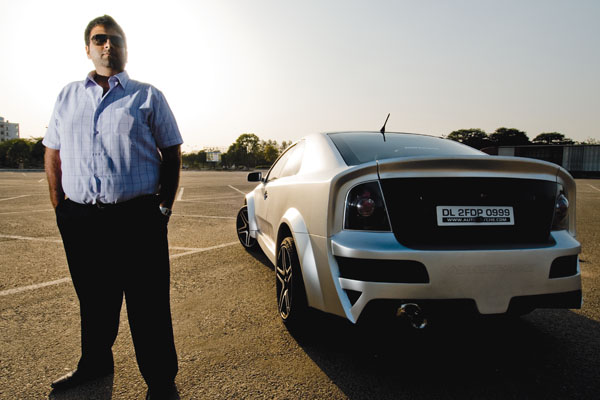 Image: Amit Verma
BIG ON LOOKS Arush Vohra with his modofoed Skoda Laura
Bar the enthusiasts, it’s more about the look than performance. As Dilip Chabria (see interview on page 102) says, “Okay, he wants to brag about speed. But he is never going to use that speed and it all begins with the looks part.” He would know. He recently modified an Audi Q7, creating a totally unique beast he named the Imperator, a mishmash of an SUV and a super car, with gull wing doors and 28-inch wheels. On a city street, the car operates at a fraction of its potential, but he sold the car to a buyer in Delhi. He won’t disclose the buyer’s name, but we hear that the price tag was well over a crore.
Take Vimal Vijayan. In his late 30s, average height, starting to put on weight, married, two kids, a sedate chap. He talks, softly, about his concern about the kids getting bored on long family drives. To make the journeys more entertaining, he plans to set up a Playstation in the car for them. Perfectly normal indulgent dad. Jut like millions of other reasonably affluent dads around the country. But then, there’s his car. It’s got a lot going for it even without a game arcade in the back seat. It’s a black Ford Endeavour. With a really big, menacing chrome grille on the front that gives it (and his eyes gleam in a far-from-sedate way) a “gangster look. I want people to stop, take a look at my ride and say, ‘he has a good choice.’” He gets his wish, he says: Owners of BMWs and Audis slow down to steal a glance at his car.
If it’s the look you’re after, Delhi is the place to go; appearances matter there. 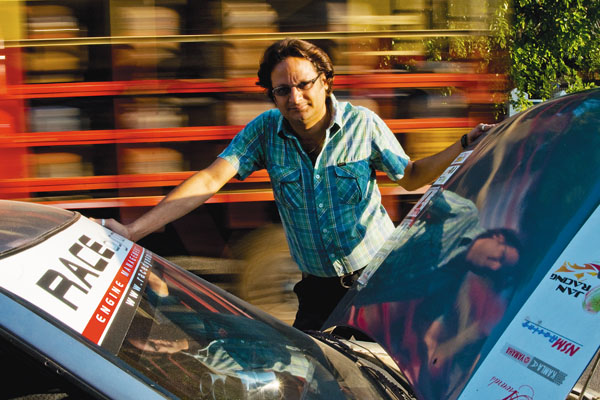 Image: Gireesh G V for Forbes India
BRUTE POWER Keshav Arora with his Maruti Suzuki Esteem in India
What’s an average red-blooded North Indian male to do to get his average ride stand out? One of the better known names in the National Capital Region is Arush Vohra’s Autopsyche, a small modding workshop in Gurgaon. He’s another perfectly normal looking man, but engine oil pulses hot through his veins. “As a kid, I used to spend my evenings in my dad’s workshop. I have been brought up among cars.” At 18, he sat for his IIT entrance exam and all he did was draw pencil sketches of cars. He acquired an automobile engineering degree from Western Michigan University, and in 2005 he started Autopsyche. Today, at 29, he’s done well. Autopsyche has created a niche in body kit design and manufacturing for almost all makes of vehicles, and he works on something like three to six cars a month, doing business worth Rs. 900,000 a month. Business is so good, in fact, that he finds very little time to modify his own Mitsubishi 3000 GT. “The concept is to make it look and run like a Ferrari and I have been working on it for more than a year now but I have only been able to do it up on the outside.”
Where does his clientele come from? “There are two kinds of customers. The enthusiasts who are few in number but are in it for passion; they get the work done in phases. And then there’s the younger crowd, 20-30, who know very little about cars but want a different look because it is the in thing to do, just to show off.”
And this is perhaps the more difficult part about body modification. Not unusually, his younger customers are usually impatient, and some are just plain stupid. “Once a guy called me saying that he wants to convert his Maruti van into a sports car.” This, says Vohra, straight-faced, “has stayed in my mind for a very long time.” You’ve got to be realistic, he says, and design takes time, so you’ve got to be patient. “I only modify cars, I don’t do magic.”
So, yes, body modding has its limits. But if you want to juice up what’s under the hood, there’s much you can do.
Jignesh Goradia was another guy who, initially, seemed like one of those pillar-of-society types: Mid-40s, tall, balding, formally dressed, spoke really slowly. (Starting to see a trend here?)
And then he stepped on the gas. 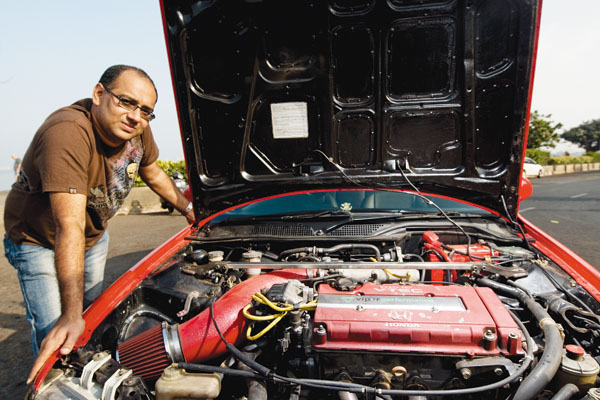 UNDER THE HOOD An inside look aat Jignesh Goradia's 18-year-old Honda Civic, Image; Vikas Khot
The tyres on his 1992 Honda Civic screeched. And the vehicle lunged forward. Goradia did it again, again and again. This 18-year-old car “can do about 0-100 kmph in about 6 seconds, and 0-200 in close to 14 seconds,” he says, quietly. Compare that with the performance of the new generation Honda Civic: 0-100 in about 9.5 seconds and 0-120 in about 21 seconds.
Modding is his part-time occupation; his main gig is selling after-market performance parts and running a Ferns & Petals outlet in Colaba, Mumbai. His outfit, Viper Performance, has an unusual business model. He doesn’t own a workshop or a garage, and he is sole proprietor and employee; all work is outsourced. “We all know that no place can be best at everything. So, I have identified places that are good in a particular field.” He modifies around 100 cars a year. He could probably make much more money if he ran a full-fledged workshop, but he has his reasons: “First I don’t want to be called a garagewala. And second, my motivation to overcharge customers is in check as modifying cars is not my bread and butter business. I treat every car as a project and charge 15 percent of the project cost as my fee.”
Performance modding of the kind that Viper does gives you a street-legal car. Even though you’re not really going to get a chance to give the vehicle its head in the city, you can use it as your daily ride.
But what of the racing scene? For that, you need to be in Bangalore. There, modding is all about speed and stopwatches. And one person there who knows performance inside out is Keshav Arora. During the week, he’s a hard-working software professional who leaves for office at 8 a.m. and rarely gets back home to his wife and kids before 9 p.m. In his free time, though, he morphs into a creature called Psycho.
Psycho is a drag-racer, and a darn good one, apparently: In February 2010, he won the second spot in the Deccan Quarter Mile Race, clocking 14.53 seconds (his earlier record was 14.9 seconds) in his Maruti Suzuki Esteem. It is the fastest Esteem in the world. Psycho’s mania for speed started in 1991. He was a biker then, and he used to ride an Avanti Garelli. “The bike didn’t have any rear brakes so I was doing stoppies [where the rear of the bike rises into the air, the opposite of a wheelie] all over the place. I was forced to get out when I had an accident while riding in a dirt bike race.” He badly injured his vertebra and called it quits on the two-wheelers.
He mods cars, but only as a hobby. He takes on not more than four a year, usually only for close friends. “My salary pays for my life pretty well,” he says, and the low turnover ensures quality, since he can monitor the work closely. The resulting high standard has one more benefit: “It also keep out the kids.” And then he goes back to his playground. NEXT PAGE : Things you should know to modify the vehicles 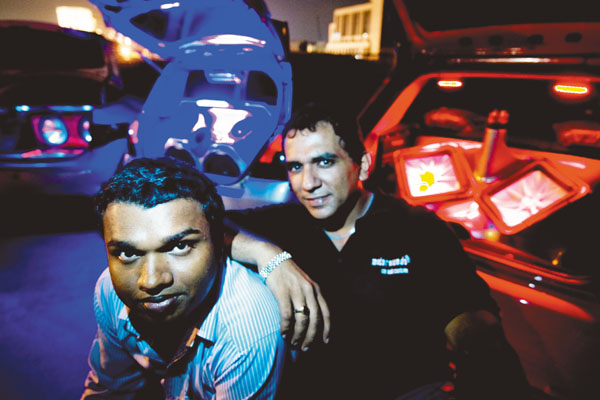 Image: Vikas Khot
HIGH VOLUME Atish Krishnan and Ravi Nandrajog at Blazed Customs make funky car audio- a style statement
Things you should know to modify the vehicles are:
Street Legal
• Regional Transport Office (RTO) rules: body work requires the written permission of the manufacturer.
• Engine modification that changes the specifications of the stock engine needs RTO permission. The vehicle must clear all regular pollution checks and safety standards.
• An engine swap must be certified by the RTO.
• Use of Nitrous Oxide (a chemical that increases the power of an engine, usually used for performance racing), on roads is illegal.
• Turbo-charging and supercharging is, surprisingly, permitted. Because it is an add-on to the internal combustion engine.
• Loud exhausts are not allowed. Decibel levels must remain within prescribed limits.

Tweets by @forbes_india
Fall of The House of Lords
Singapore Airport: Secret of Success