Sri Lanka has vanquished the Tamil Tigers. It must ensure terrorism doesn't get another chance

There is an air of urgency in Sri Lanka. Fighting with new vigour, the country’s army has won a 26-year-old civil war through which the Liberation Tigers of Tamil Eelam (LTTE) championed a separatist cause for a Tamil homeland.

The army has retaken the rebel territory and defeated the feared Tigers. At last, Sri Lanka is thinking of a future beyond LTTE supremo Velupillai Prabhakaran, an enigmatic and self-taught warrior that some hail as a freedom fighter and others see as a psychopathic terrorist.
“In conventional military terms, LTTE has been more or less finished,” says N. Sathiyamoorthy, director of the Chennai chapter of Observer Research Foundation and a long-time Sri Lanka watcher.
The vexing Tamil ethnic strife, which is at the root of the war, cries for a political solution if the country wants to cement the gains of a military victory. If President Mahinda Rajapaksa, who destroyed LTTE, fails to offer a political solution, terrorism will rise again. 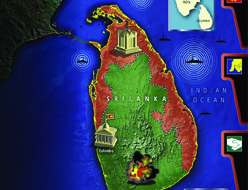 Image: Malay Karmakar
When the Tigers once roared
The reasons for the conflict continue to exist. The Tamil demands for equal treatment with the Sinhalese, right to dignity, an end to paramilitary excesses and opportunities for education and jobs have not been met. That is why India, given its ties to the Tamils, must play the twin role of nurturing new age Tamil leaders and lobbying with Colombo for a lasting solution fair to the Tamils.
Three options are present before Rajapaksa now. Depending on the one he chooses, history will remember him as a racial supremacist or right-wing potentate or genteel democrat. Amen!
THE SLOBODAN MILOSEVIC OPTION
Colombo’s Tight Fists
After vanquishing LTTE, President Rajapaksa treats himself as the emperor of Sri Lanka and imposes a unitary State. He is tempted to dismiss the Tamil ethnic strife as a mere terrorist problem that has been solved. The country goes back to discriminating against the Tamils.
Bad idea. Sinhala chauvinists love it, but the Tamils erupt in violence again. The LTTE gets revived or another militant outfit takes over. The country is back to its bitter past. The opportunity for a solution has been squandered.

THE MARGARET THATCHER OPTION
Tamils Under My Thumb
Rajapaksa makes limited concessions to Tamils, but still keeps the Sinhala-dominated Central government all powerful. He revives the 1987 Indo-Sri Lanka accord thus placating India and other countries as well. But, he makes sure Tamils can’t do anything without his approval.
Not good enough. Sinhalese complain about too many concessions and the Tamils about too few. It also leaves the door wide open for Colombo to resume its discrimination against Tamils. Tamils remain politically weak.

THE JAWAHARLAL NEHRU OPTION
Handshake Of Equals
Rajapaksa swallows his hatred and stands up to Sinhala chauvinists. He devolves powers to the provinces. He does away with the concurrent list in the constitution, thus giving autonomy to Tamils. He revives the Senate to give the provinces a say in national governance.
Way to go. This has the potential to end the conflict permanently. Tamils gain full political power and equal status with the Sinhalese. LTTE becomes irrelevant. Opposition from Sinhala extremists fizzles out because Rajapaksa, vanquisher of LTTE and deliverer of Tamils, is a national hero.

Tweets by @forbes_india
The 360 Degree Magazine
The Lakshmi Mittal interview