The Need For a Critical Thinking Revolution

Linda Elder, who heads up the Foundation and Center for Critical Thinking, discusses why we need a revolution in the way we think

Let me begin with a question that you yourself have posed: Can we collectively deal with accelerating change and complexity without revolutionizing the way we think?

If you look at the pressing problems we’re facing, there is clear evidence that we need to start thinking very differently as a species.  People across the globe are interconnected as never before,  and unless we start to routinely examine our thinking in explicit, systematic ways, we will continue to do what we’re doing now -- which is a seemingly hopeless blend of both good and bad thinking. 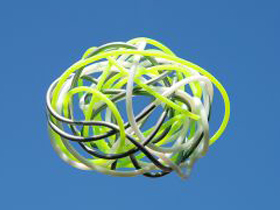 Consider the oil that gushed uncontrollably in the Gulf of Mexico last summer -- an accident primarily caused by the lack of critical thought on the part of BP management and employees.  The problem is that we have the technology to create such things deep in our oceans, but we apparently don’t have the technology to reliably cap them when something goes wrong.  People are using available technologies before thinking through their implications, and the consequences can be far reaching and devastating. One hundred years ago, the skills people needed to survive and sustain the earth were far simpler than those needed today.  It is imperative that we begin thinking seriously about the thinking that drives us and that will -- like it or not -- determine the future of life on our planet.

You have said that to become a great thinker, we have to learn to do ‘moves’ with our mind that are analogous to what athletes do with their bodies.  Please explain.
As we go through each day, everyone makes what can be called intellectual ‘moves’ at various levels of skill: we ask questions, we pursue answers to those questions, we make inferences, form theories and so on. But while people reason perhaps hundreds of times on any given day, most of us rarely – if ever -- think about our reasoning in any sort of disciplined way.  Sometimes our thinking is perfectly fine, but other times it isn’t, and we don’t often know the difference.  When we make our thinking the object of our thinking, we will routinely ask questions like:  What am I assuming in this situation?  Are these assumptions justifiable?  From what point of view am I looking at this? Is there another reasonable way of looking at this that I haven’t considered?  What are the most important implications of deciding to do this instead of that?  All of these are examples of intellectual moves that we should do much more often.  If we did, our reasoning and the decisions that follow from it would improve significantly.

Along the way, we have all picked up some bad thinking habits.  What are some common ones?
A major one stems from our intrinsic egocentric orientation to the world. We all come into the world with the point of view that it is here to serve us, and for as long as the world is serving us we’re fine; but the moment it isn’t, we get upset.  To put it another way, we humans are habitually selfish.  It’s not that we are always selfish, but selfish habits are quite natural to the human mind.  You can pick up the newspaper on any given day and find numerous examples of selfishness, and if we are honest with ourselves, we can see our own selfishness playing a significant negative role in our lives.

Another set of habits of mind connected with egocentric thinking comes from our intrinsic desire to have our thinking validated.  People mostly perceive their thinking to be both correct and true; otherwise they would change it (or so they think).  As a result, when faced with alternative ways of looking at things, people often reject them as ‘illogical’ or ‘unreasonable’ simply because the viewpoints differ from their own.  This leads to a kind of rigidity in thought and action.  When people are in this modus operandi, they see their narrow thinking as perfectly reasonable, and as long as people validate them, they are happy.  But if challenged, they often resist, retaliate or sulk.

A third common set of habits of mind comes from sociocentric thinking, which is essentially the view that ‘our group is the best’. This can be seen as an extension of egocentric thinking. Humans function in groups -- we wouldn’t survive childhood if we didn’t. The problem is that, within these groups, people often thrust illogical belief systems and ideologies upon one another.  Indeed, cultures are structured so that people go along with established group beliefs, however irrational those beliefs might be.  We are expected to -- and indeed do -- habitually conform to group think, and this begins in childhood:  children are not typically taught to question existing views of their culture or what their teachers or parents tell them.  Indoctrination of this sort extends throughout higher education, and as a result, conformity of thought is manifest in a multitude of ways in human societies.

You have said that critical thinking entails the integration of three dimensions: being idealistic (capable of imagining a better world); realistic (seeing things as they are); and pragmatic (adopting effective measures for moving toward our ideals.) Which aspect is the most lacking in the current environment?
In truth, we are lacking in all three areas, but if I had to pick one, I would point to the idealistic dimension.  For instance, we are not good at imagining what a ‘fair-minded critical society’ would look like, and therefore we are not working effectively towards the creation of such a society.  While the term ‘critical thinking’ is widely used, it lacks real currency: most people think they are already thinking critically, and that if others just thought like them, the world would be a better place. The concept of a critical society is rarely voiced in public discourse, so few people are discussing what it would take to create it. If we can’t envision fair-minded critical societies, we can hardly create them.

It is of course important to recognize that many people are working hard to create a better world – animal rights groups such as PETA, the Farm Sanctuary, the Humane Society, groups like Amnesty International and environmental groups trying to curb destruction of the planet are a few that come to mind.  But what is missing is a conversation about what is at the root of all the problems these groups and other advocacy groups are attempting to address: what kind of thinking caused all these problems in the first place? Very few people are aware of the tools of critical thinking which, when routinely applied, could deal with these problems more systematically and permanently.

Describe the differences between strong and weak critical thinking.
This is a distinction introduced by my colleague Richard Paul some 30 years ago.  The basic idea is that critical thinking can be used for good or ill.  Ethical critical thinking is critical thinking in the strong sense, and unethical or ‘sophistic’ critical thinking represents the weak sense.
Unfortunately, the history of critical thinking is largely that of the weak sense - thinking well to serve selfish or vested interests, without regard for the rights of others.  Consider Hitler.  He was in many ways highly skilled at thinking – especially in choosing experts to run his initiatives. But his was weak critical thinking because he used his skills to get what he wanted without concerning himself with the ethics of what he was doing. His way of thinking was the opposite of that of Socrates, who attempted to lead people to more fair-minded critical cultures.  Socrates envisioned a world where people continually work towards self-improvement and justice, consistently questioning their own ideas and motives, and where people are not concerned with, ‘what’s in this for me?’, but with ‘what is in this for everyone relevant to the situation?’

What does fair-mindedness entail?
Fair-mindedness is a habit of mind in which the reasoner consistently thinks within all relevant viewpoints in order to understand them and be moved by them when the evidence indicates to do so.  This means giving up one’s own view when another view is deemed more reasonable, and perhaps most importantly, it means considering what is just and fair in the situation without privileging one’s own interests.
Fair-minded thinkers think within alternative viewpoints in good faith -- without dismissing, distorting or ignoring them.  Implicit in this -- and very much lacking these days -- is empathic thinking. This is the propensity to take a viewpoint and accurately represent it in one’s own mind.  We can practice intellectual empathy when we are in a disagreement with someone by stopping the conversation and saying, ‘OK, let’s try to take one another’s point of view.  I will argue from your point of view for the next 10 minutes and then you will argue from mine.  Our goal will be to state as accurately as possible the other’s viewpoint.”  If people did this exercise routinely, they could go a long way towards understanding and empathizing with one another.
But fair-mindedness is not something to be done on occasion:  it is a holistic way of taking up the problems of life -- a habit of mind that must be consciously cultivated by the thinker.  Even with the best of intentions, it is a daily struggle.

You encourage people to ‘think globally’ about their lives.  What does that mean?
It is no longer good enough to be skilled at thinking in a narrow or specialized way.  We need to learn how to think well within all the major domains of human life.  It doesn’t make sense to say, for instance, ‘I just want to be the best parent I can be; I don’t need to do anything else well’.  Of course, all parents should strive to parent as well as they can; but there are other problems in the world that we are all responsible for thinking about.
We are all citizens of a global community and by implication, we need to think well about global issues: we are in a literal race to save our oceans, our air -- perhaps our very planet.  Our lives are interwoven in ways we don’t even understand.  The only way we can solve the almost overwhelming problems we currently face us is if we collectively begin to think critically in a global, systematic, fair-minded way.  Only then can we begin to realize the world Socrates envisioned.

Tweets by @forbesindia
Embraer: The Future of Flying
Are You Ready For an Earthquake?