Unitus Seed Fund raised $23 million for impact investing in India, nearly a third of it from local investors. It is now gearing up for a second, larger fund. With internet penetration reaching critical mass, the 'base of the pyramid' is a serious investible asset class 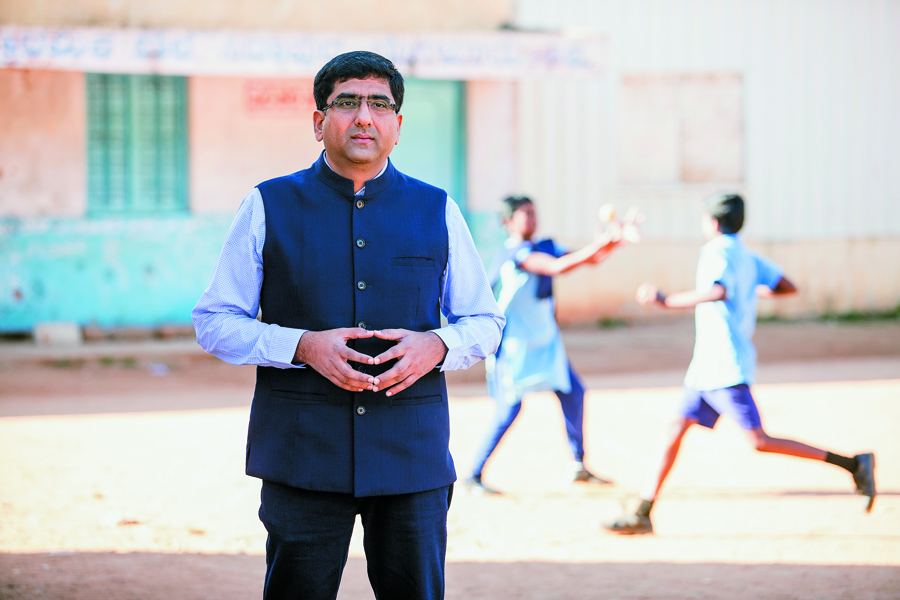 In early 2015, when Unitus Seed Fund announced it would invest in Bengaluru-based startup BetterPlace Safety Solutions, it was another indication that the fund, an impact investment pioneer in India, was ready to ramp up its footprint in the country.

BetterPlace’s platform uses a person’s Aadhaar number, provided by the Unique Identification Authority of India (UIDAI), as the basis for providing digital verification solutions. By tapping into the Aadhaar database and also physically verifying documents, the startup creates a ‘trust profile’ of its users. This can be used by millions of urban poor to apply for jobs—as security staff, courier and food delivery personnel, in warehouses and factories and also shopping malls and cab-hailing networks. Health care services platforms like Practo and Portea Medical also rely on BetterPlace’s services to recruit staff.

“It [BetterPlace] is a perfect example of the kind of entrepreneurs that we like to work with and is also a business that applies state-of-the-art technology, on a business-to-business (B2B) basis, to empower low-income people,” says Will Poole, 55, co-founder and managing partner at Unitus Seed Fund, which has invested $500,000 (around Rs 3.4 crore at current rates) in BetterPlace.

Poole, who at one time ran a $10-billion business as vice president at Microsoft Corp, teamed up with Dave Richards, another long-time US-based technologist, and Srikrishna Ramamoorthy (an engineering graduate who had earlier co-founded Kinara Capital, a small business lending  startup) in 2012 to start Unitus Seed Fund, based out of Bengaluru and Seattle.

Unitus Seed Fund is a spin-off from Unitus Labs, founded in 2000 by a set of like-minded people in the corporate world—mostly from financial services and technology—in the US. The idea was to provide credit lines to ventures that tackled social issues in emerging markets like India.

Unitus Labs’ first decade was spent investing in microfinance firms. It raised the Unitus Equity Fund and backed microfinance ventures, including Ujjivan Financial Services and SKS Microfinance in India. By 2010, microfinance had become mainstream and there was active participation from venture investors such as Sequoia Capital and multinational government-backed banks such as the International Finance Corporation. “Even hedge funds had realised by then that this [microfinance] was an investible asset class,” says Ramamoorthy. “By 2012, the time was ripe to take the same playbook and work to create largescale impact in other sectors as well. That was the genesis of Unitus Seed Fund.” 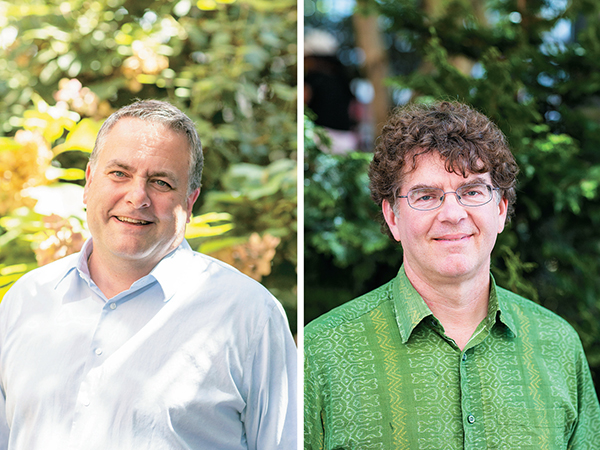 Dave Richards (left), a technologist based in the US, and Will Poole, who spent many years with Microsoft, started Unitus Seed Fund in 2012

Unitus Seed Fund’s 23 investments so far, mostly in education and health care, have been made from its first $23 million fund raised in 2013. Not all of the money in the fund was exhausted in one go; a portion has been set aside for subsequent investment rounds in existing ventures.

Early investments include Hippocampus, which is taking formal pre-school education to villages in India, and GoCoop, which connects artisans directly with buyers via a cloud-based platform that includes an online directory, customised websites and marketing services.

UE LifeSciences, another startup that Unitus Seed Fund has backed, has built a portable scanner to detect potential signs of breast cancer. The company is looking to manufacture its devices in India and recently received additional investments from biopharma company Biocon’s founder Kiran Mazumdar-Shaw.

Interest from hard-nosed investors like Shaw is an important metric to gauge the success of startups. “More than half the ventures in our portfolio have gone on to raise external capital in subsequent rounds at higher valuations,” says Ramamoorthy, 37. “That, as a seed fund, is a validation of our efforts.”

These subsequent investments would not have come without early support from Unitus Seed Fund. “Investors have to look at returns, but they must also understand that there is a larger social impact that can come through. Clearly, that is where Unitus stood out for us,” says Saurabh Tandon, co-founder and COO of BetterPlace, who was advised by UIDAI’s former chairman Nandan Nilekani to approach Unitus Seed Fund in late 2014.

Unitus’s advice has been vital oxygen to the fledgling BetterPlace as social impact startups need backers who have the bigger picture in mind. Besides venture capital, social impact startups have also tapped Unitus Seed Fund’s network of like-minded NGOs and other investors. Says Tandon: “They [Unitus Seed Fund] are looking at ideas from a broader perspective, specifically businesses that are employing from, or addressing the needs of, the base of the pyramid. By our estimate that is almost 85 percent of the country.”

And from this lower half of the pyramid, there are monetary dividends too that investors can reap. “The opportunity at the base of the pyramid is all about small margins and high volumes. It’s a volume game and India lends itself to it beautifully,” says Ramamoorthy.

What’s more, India’s smartphone revolution is cutting down the costs for businesses and their customers, making it an important enabler in the impact funding ecosystem. India is estimated to have touched 462 million internet users in mid-2016, according to the Internet and Mobile Association of India (IAMAI). Around two-thirds of those users access the internet on their smartphones. And smartphone penetration in India is still low enough for it to grow further.

“We see the whole smartphone-based mobile internet penetration as a big enabler for all base-of-the-pyramid businesses,” says Ramamoorthy. Smartphones are drastically cutting the costs for businesses to reach their consumers and vice-versa. It enables businesses to run operations efficiently because now it is possible for a large workforce to remain well networked on smartphone-based applications.

With the growth in internet penetration, it is expected that more of the country’s poor will enter into the fold of the formal economy. This will happen through a combination of Aadhaar-based services and a shift towards digital finance. A veritable bandwagon of startups is leading the charge to build a host of services that can be accessed on the smartphone, eliminating the need for paper money.

These benefits are likely to first reach the lower-income households in cities as that is what the global experience points to. India’s cities can generate as much as 70 percent of the net new jobs to be created in the country by 2030, estimates the McKinsey Global Institute. India’s urban population is expected to rise from 340 million in 2008 to 590 million in 2030. Indian cities could, by then, generate 70 percent of the country’s GDP and effect a four-fold increase in per capita income in the nation, McKinsey estimates.

That means startups such as BetterPlace couldn’t have come up at a better time. And as more such ventures pop up, the timing is perfect for Unitus Seed Fund to evolve into its next stage of growth. The fund is now looking to raise a second $50 million fund to invest in the next set of businesses looking to solve some of India’s biggest problems.

It also has plans to invest in fintech firms, an opportunity that becomes pertinent in the context of India’s recent demonetisation drive, which many expect will boost the penetration of digital finance into the lower-income segments.

When Unitus Seed Fund opened its first fund in 2013, the original target was to attract $15 million. Soon, the fund realised there was interest from both individuals and family offices to invest in this asset class. That encouraged the firm to hike the quantum to $23 million. An important aspect here is that nearly a third of the money came from ‘rupee capital’, that is from investors in India. At a time when almost all venture money in the country came from overseas, this was a significant achievement, Ramamoorthy believes. With talks already on to raise a second, larger fund, he is optimistic that many local investors—both existing and new—will join in.

“It was one of the earliest instances of rupee capital being raised for impact investments in India,” says Ramamoorthy. “Even today, the vast majority of venture capital in India is offshore funds.” There is an urgent need for more local capital that can back businesses solving local problems.

“Two things stand out about Unitus,” S Viswanatha Prasad, founder and managing director of Caspian Advisors, a well-respected impact investment company, tells Forbes India. “They are on the ground—close to the entrepreneurs and the market; that’s a big difference when you do early-stage financing. I think the people at Unitus Seed Fund are focussed. Second, they are probably one of the few early-stage impact investors who are looking at multiple sectors.” 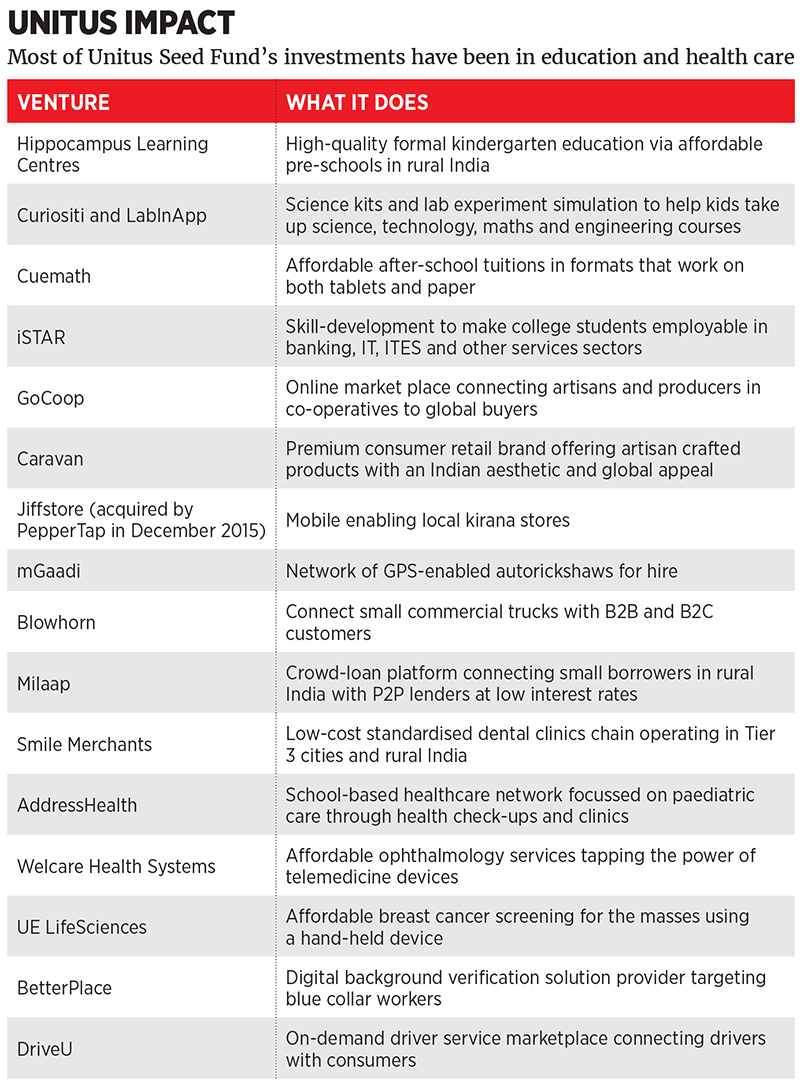 In an effort to maximise the returns from their investments, many investors run the risk of narrowing their focus, points out Prasad, who started Caspian in 2004. He also serves on the investment committees of Prospero Microfinance in Latin America and the India Education Investment Fund, which is backed by the Michael & Susan Dell Foundation.

“You can’t look at problems in isolation. Unitus Seed Fund’s decision to invest in multiple sectors, its ability to be on the ground and its senior partners who are bringing in the best of early-stage investment practices from the West is a powerful combination. It’s the next stage of impact investing in India,” he says.

DriveU, an on-demand chauffeur service, is another startup that received funds from Unitus in early 2016. Its chauffeurs receive technology-enabled training, and, unlike some drivers on cab-hailing networks, are not burdened with EMIs to pay for a cab bought with a bank loan, Poole points out. DriveU’s founder Rahm Shastry, a former TaxiForSure executive, is also ensuring all drivers on his service have a health insurance plan.

“Our philosophy is that if the impact is built into the business, that’s the way to do it. The impact will scale as long as the business is scaling and performing. Impact and profit can go hand in hand,” says Ramamoorthy.