An astonishing journey of four women, their struggles and fights that has a lesson for the new generation of women leaders 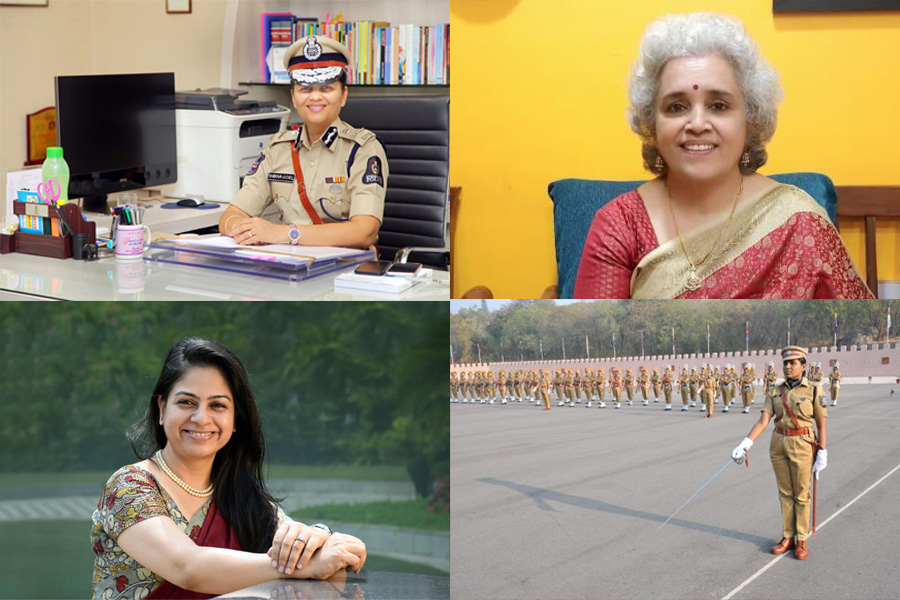 The theme of International Women ‘s Day this year is – choose to challenge. To celebrate this, I caught up with four amazingly talented women leaders in their field of work. These women challenged the established gender order – they screamed when they were expected to be silent and pushed the boundaries when they were expected to be within the borders. They showed courage and reached the position they truly deserve but not without overcoming some of the patriarchal roadblocks. This is an astonishing journey of four women, their struggles and fights that has a lesson for the new generation of women leaders.

Koeyli Jaluka heads the communications, CSR and public affairs at Roche Diabetes Care, India. Shikha Goel is an IPS officer of the 1994 batch. She is presently the additional commissioner of police in Hyderabad. Lakshmi Lingam is dean of media and cultural studies, Tata Institute of Social Sciences (TISS), Mumbai. Earlier, she set up the TISS Hyderabad campus as its first Deputy Director. Ajeetha Begum Sultan is an IPS officer of the 2008 batch and the first Muslim woman IPS from Tamil Nadu. She is presently the assistant director of the National Police Academy, Hyderabad.

Is climbing the career ladder harder for women than men?
Koeyli Jaluka believes that it is not easy for women and the biggest challenge is multi-tasking and expectations from society. “A father, how much good he is in household work, is not considered as a primary caregiver,” says Jaluka. As a single parent, it became more challenging for her to climb the corporate ladder while nurturing her son. She explained that many a times, she was the only woman in the board room, and it has not been easy for her to fight the male bastion. “You need a balance in the board room; women bring in perspectives which is different than men. You need both types of experiences in the board room” says Jaluka.

Women must prove their worth on an everyday basis – feels Shikha Goel. Policing is largely a masculine space and women are always under scrutiny by their male counterparts. “I had to work twice as hard as my men colleagues to show that I am worth it,” says Goel. There is a tendency to patronize women because it is difficult for men to consider women as equals. At times, women also get projected more than their male colleagues for the same job because the media loves a woman IPS officer. But the pitfall is that the slightest mistake may lead to the entire women community being branded as incapable. “This does not happen to men as their mistakes are individual while women carry the burden of the entire women force,” says Goel.

How hard was it for a Muslim woman IPS officer to climb the ladder and be there? Ajeetha Begum Sultan feels that she was never ever discriminated on account of her religion. “No one has ever denied me any position or authority because I came from a Muslim community. I can vouch about this till today” said Sultan. Most of the discrimination came from outside the system and not from inside. Gender wise, it’s a personal choice for women officer to be one amongst equal with their male counterparts. As an officer who served J&K cadre in her first posting to take up policing positions in rural Kerala, she had faced how women officer were looked differently. Narrating a story of 2012 when she was heading a district in Kerala that had 40 police stations, all headed by men officers. When she tried training women for this, she got a backlash because the culture of women officer heading a police station did not exist in Kerala then. After the struggle, she could place a women officer who did exemplary work. Now, there is a direct entry for women to head police stations in Kerala, informs Sultan.

While we celebrate women breaking the glass ceiling to reach the top, it would also be useful for us to know what goes on in women not breaking the glass ceiling? Lakshmi Lingam believes that when one starts reaching the top, one would experience how political, competitive, and masculine that the top space is. “There is much larger story of subtle masculinity in organizations that do not allow women to break the glass ceiling, which goes beyond the typical work-life balance or women’s leadership abilities and discourses. This needs to be looked into”, laments Lingam.

Can women have it all?
For women who decide to remain single, very often these considerations of the biological clock ticking and going against the career clock does not matter. They may face other pressures to explain to the society why they chose to be single and that is another battle. But for women who opt to get married, raise children, take care of the elderly and look for the family in a typical Indian context, multitasking becomes an order of the day. The requirement for travel, coordination with multiple staff or stakeholders could be straining along with multiple family responsibilities. In the absence of reliable institutions that supports women in taking this burden off her shoulder, women juggle between them. At that point, one needs to see what kind of work one does to be in the forefront and not feel like one is missing out. “Women should have it all, and I would say that men should jump in to see that it happens,” says Lingam.

Why cannot women have it all – questions Jaluka. “I have it all. It is a perspective of how you look at your life and what do you mean by it. I am living life on my terms without being answerable to anyone which is a great way to be” says Jaluka. For Goel, building an ecosystem of close family and caregivers helps in the process if a woman chooses to have a career, a family, and children. “I don’t believe in the concept of a superwoman, I can’t be super cop, super wife, super cook etc and all at the same time. It is impossible. I prioritize and see that I can manage most of them” says Goel. For Sultan, a helpful family and partner facilitates the process to lead a guilt-free life for women while withstanding the job pressure that comes with being on the top. She explained that at times, she used to be out for days while her young children were under her grandmother’s care. She could freely work in the field due to the family ecosystem and support we have in India.

Advice for emerging women leaders
These women leaders have some advice for young women who are trying to build their careers. Lingam says that it is important to work in alignment with the organization one works with. If the personal and career goals are allied with that of the organization, there would be less conflict.

For Jaluka, women should not take short cuts even if that option is available for them. She saw many of her contemporaries dropping out in between because they felt that they need to take care of their children. “So, don’t expect it to be easy. When you come in with the right set of expectations, you would find your way to the struggle” says Jaluka.

At every step, any job you want to take up, you should be willing to make sacrifices. You must break the glass ceiling each time you rise up the level – says Sultan. “You have to fight it out at every single level. Life is a great journey, but unfortunately, we as women have to keep fighting it.”

For Goel, it's about taking your profession seriously and to acquire skill sets to be professionally competent. “If you are not good at your job, no one will take you seriously,” says Goel. It would take one more decade for women to breakeven with about 30 to 35% spaces on the top.  Till that happens, we need to cut above the rest, laments Goel.

Understanding the challenging journey that these incredibly courageous women have, it seems important for emerging women leaders to keep pushing the boundaries and coming out of their comfort zones. These could be the ways to reach the top and remain there.

Anjal Prakash teaches gender and development in the advance management programme in public policy at the Indian School of Business, Hyderabad. Views expressed here by him or people he spoke to are personal.

Tweets by @forbesindia
Beyond the Boardroom: AD Singh spills the beans
Photo of the Day: Gloriously victorious