Congrats, You Are Hired!

As the economy stagnates and companies lay off employees, some startups that see opportunities during the pandemic are charting out aggressive hiring and expansion strategies 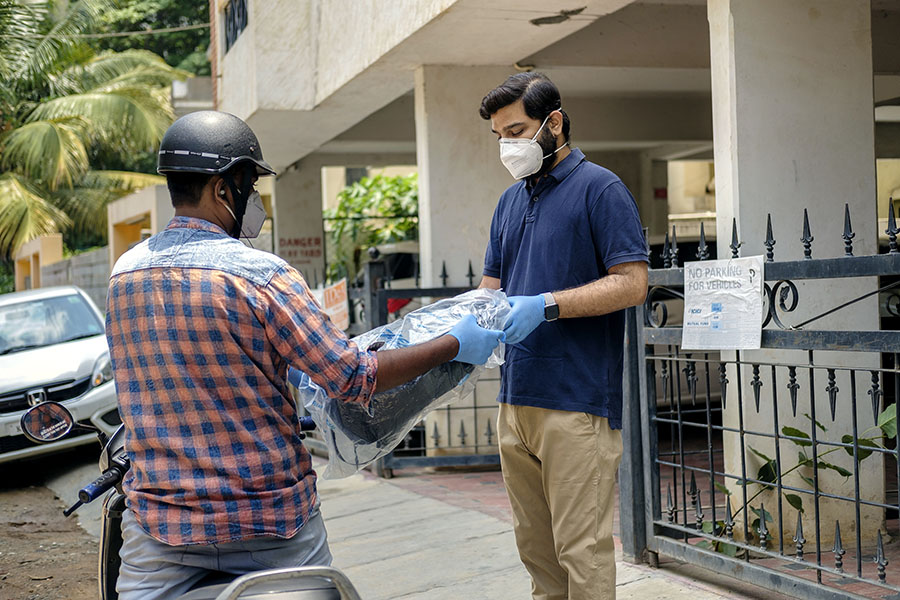 Razorpay's new recruit receives a laptop from office via Dunzo in Bengaluru. The company is hiring for over 50 critical positions
Image: Nishant Ratnakar for Forbes India

In early March, Akshat Singhal, a software products and analytics specialist, travelled to Bengaluru from his home in the National Capital Region for a job interview at Razorpay. After India imposed a nationwide lockdown on March 24, the rest of the hiring and onboarding process was virtual. Singhal finally joined the payments and financial technology venture on May 18, the day the third phase of the lockdown came to an end. “I was at the right place at the right time,” says Singhal, 30, who will soon relocate to Bengaluru.

Even as many Indian companies stare at a stalled economy amid the coronavirus pandemic, some startups are seeing demand going up for their products and services as the country cautiously emerges out of a two-month-long lockdown. These startups are recruiting aggressively. Covid-19 has especially been a turning point for the fintech sector. While the pandemic has imposed business restrictions and created uncertainty on a number of fronts, there are also new opportunities due to increased demand for digital payments and digital financial processes from the offline businesses. Many startups in this sector are re-examining their business models, hiring plans, and are currently prioritising growth and customer acquisition over profitability. Razorpay, for example, is hiring for over 50 critical positions across functions like back-end, front-end, data sciences and product management, the company said in a recent press release. In the last 12 months, the startup has more than doubled its headcount from 330 to 770, with 15 percent headcount increase happening in the past six months. Anuradha Bharat, head-people operations, Razorpay, says, “The way I see it, the fintech sector is at its exciting best right now as everyone wants to have an ecommerce presence. While there are massive layoffs happening around [us], we see this as an opportunity to hire great minds, and make quality additions to build a league of next-gen payment and banking solutions to help with the current circumstances.” In the last six months, Razorpay has strengthened its leadership team across business and engineering verticals. Some of the recent additions to its leadership team include positions of chief innovation officer, chief business officer and chief financial officer. 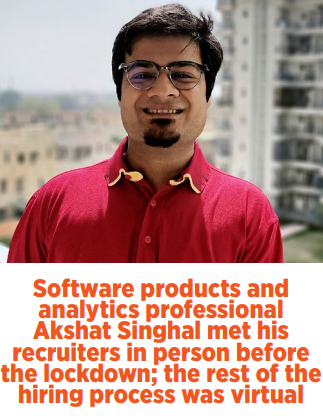 Bharat believes that with a new digital world in order, there will be an emergence of skills revolutionising the fintech space. “And this rapid technological disruption means that new skills will emerge as fast as others become old-fashioned,” she says. WhiteHat Jr, an ed-tech venture that teaches children to code, has also ramped up hiring efforts. It is onboarding 2,000 teachers and 400 staff in various non-teaching positions on a monthly basis as the Covid-19 lockdown has boosted paid student subscriptions. In a recent press release, the Mumbai-based company stated that it has been growing at 40 percent every month over the last year, and the lockdown has pushed its growth rate to 100 percent. The company, launched in November 2018, told The Times of India that it had seen more than 150,000 'student trials' and was conducting 1,000 online classes a day. “With the pandemic forcing schools to shut down, ed-tech is now becoming an essential service as parents and teachers shift to online modes of teaching,” Karan Bajaj, WhiteHat Jr’s founder and CEO, tells Forbes India. He expects this trend to continue as more parents realise the benefits of children learning to code at an early age. WhiteHat Jr, which helps kids in the 6 to 14 age group build commercial-ready games, animations and online apps using the fundamentals of coding in live one-on-one online classrooms, has built its own live-teaching pedagogy. The company has been successfully qualifying all its employee candidates online. This is followed by different virtual rounds of interviews with HR, functional teams and business leaders to close the hiring process and rollout offers. “Our hiring process is 100 percent online, and we are not meeting candidates in person to follow social distancing norms and ensure safety of our employees as well as prospective candidates,” says Bajaj. “The only challenge is if the prospect does not have the necessary technology tools in place to facilitate video interviews and start work immediately in case he or she is hired.” 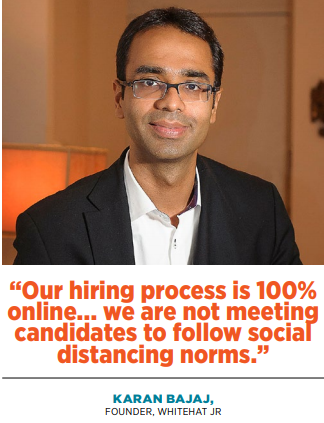 At Bengaluru-based digital payments company Cashfree, “hiring strategy remains aggressive, despite the current global scenario of uncertainty,” the venture said in a recent release. Cashfree has been profitable for the last three financial years while growing revenue by around 30x over two years and 100x over three years. This has generated sufficient cash reserves to cover company expenses for at least three more years, according to the release. “We have taken measures to ensure that our employees would not have to face any financial difficulties and job uncertainty,” the company said in the press release. Against the backdrop of retrenchment and pay cuts by other companies affected by this pandemic, Cashfree has planned appraisals and performance bonuses to help its employees stay motivated. With around 110 employees at present, Cashfree plans to approximately double its staff by December. The company has also hired a vice president for human resources to implement this plan. Currently, the startup is hiring for roles in engineering, products and business development. Indian startups aren’t the only ones hiring under the present circumstances. Better.com, a New York-based venture that helps people buy or re-finance their homes, has plans to add various roles at its Indian unit in Gurugram. As an online mortgage lender, Better.com says it has a competitive advantage over brick-and-mortar lenders. The company has seen a 200 percent increase in applications since Covid-19 began and has funded $1.4 billion in loans in April and $1 billion in loans in March in the US. To meet the demand, the company has plans to hire an additional 300 positions in Gurugram in the next quarter. In the US, the company is also hiring 1,000 new staff in 2020, and has targeted laid-off hospitality workers in New York, Charlotte, and Orange County, California. Since the pandemic hit, the venture has on-boarded 150 new hires in India and more than 350 in total. Apart from aggressive hiring, startups are also pushing the pedal to the metal when it comes to charting out growth strategies. Razorpay, with a growth rate of 35 percent month-on-month, has been witnessing an increased demand for digital payments in the last six months, especially from tier-II and tier-III cities. The company is building its banking technologies unit called RazorpayX and expects a 4x growth in its overall revenue by the end of next fiscal year. 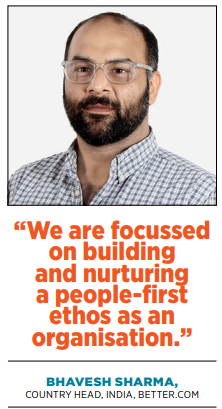 WhiteHat Jr also has aggressive growth plans to expand globally this year, and has seen a strong response to its product launch in the US. The US business is growing more than 200 percent each month. The company is recruiting for various roles in product development, technology, operations and sales. The company is also looking to hire professionals from other startups who have been affected. WhiteHat Jr, which is backed by Nexus Venture Partners, Omidyar Network India and Owl Ventures, raised $10 million in Series A funding last year. With the flexibility offered by the work from home culture that has set in during the pandemic, the company is specifically looking to onboard more women with a strong academic background who are passionate about machine learning and space technology, as teachers on the platform. This strategy is intended to help women who are looking to resume work after a professional or maternity break, and pursue a second career from their own homes. In order to help their employees adjust to their work from home routines, Better.com has also taken a number of steps. “We are deeply focussed on building and nurturing a people-first ethos as an organisation. We recently launched a series of employee wellness initiatives during these extremely daunting times”, Bhavesh Sharma, country head-India, Better.com, said in a press release. Some of these initiatives include providing stipends to help staff furnish a work-from-home area in their homes, additional financial help to manage Wi-Fi expenses, and virtual therapy sessions with licensed therapists to help improve overall mental health of employees. Meanwhile, at Razorpay, Singhal has found there are pros and cons of working from home: While in-person interactions would have helped him build better rapport faster as a new employee, from a purely professional point of view, Singhal says that he hasn’t met with any major challenges so far. In fact, the flexibility of the work from home scenario has led to better utilisation of time, Singhal says, citing similar feedback from his team as well. This has led to slightly better output in some areas. In other areas, for example with brainstorming new ideas, there are difficulties because “we are so used to brainstorming with whiteboards that we are taking some time getting used to doing it over video calls”.

(This story appears in the 19 June, 2020 issue of Forbes India. To visit our Archives, click here.)