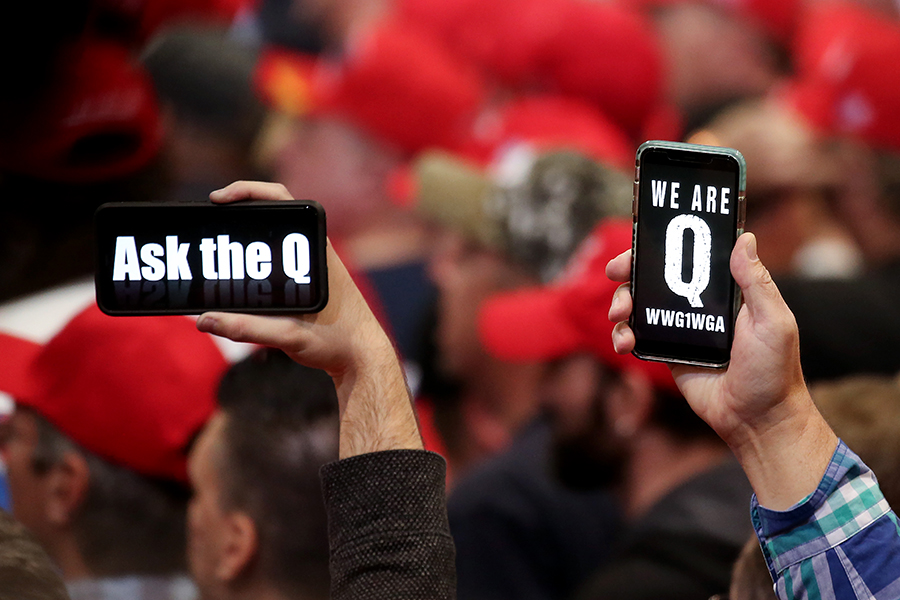 Supporters of President Donald Trump hold up their phones with messages referring to the QAnon conspiracy theory at a campaign rally at Las Vegas Convention Center on February 21, 2020 in Las Vegas, Nevada. The upcoming Nevada Democratic presidential caucus will be held February 22. Image: Mario Tama/Getty Images

SAN FRANCISCO — Facebook, Google and other major tech companies said Wednesday that they had added new partners and met with government agencies in their efforts to secure the November election. The group, which is seeking to prevent the kind of online meddling and foreign interference that sullied the 2016 presidential election, previously consisted of some of the large social media firms, including Twitter and Microsoft in addition to Facebook and Google. Among the new participants is the Wikimedia Foundation. The group met Wednesday with representatives from agencies like the FBI, the Office of the Director of National Intelligence and the Department of Homeland Security to share insights about disinformation campaigns and emerging deceptive behavior across their services. Discussions between the tech companies and government agencies have occurred periodically over the past four years. While some of the companies have made a practice of sharing leads about disinformation campaigns and other election threats, the efforts have been haphazard. The effort has broadened as the November election approaches, and the tech companies and agencies have tried to coordinate more frequently. “In preparation for the upcoming election, we regularly meet to discuss trends with U.S. government agencies tasked with protecting the integrity of the election,” a spokesman for the group said in a statement. “For the past several years, we have worked closely to counter information operations across our platforms.” The group emerged from meetings that began between the tech companies and government agencies last fall. The companies have since taken action to ward off threats in elections around the world. Facebook, for instance, has monitored election behavior in Brazil, Mexico, Germany and France. Last year, the social network said it was strengthening how it verified which groups and people placed political advertising on its site. At Wednesday’s meeting, the group and agencies updated one another on the behavior and illicit activities that the companies were seeing on their platforms. “We discussed preparations for the upcoming conventions and scenario planning related to election results,” the group’s spokesman said. “We will continue to stay vigilant on these issues and meet regularly ahead of the November election.” In addition to the Wikimedia Foundation, the group has expanded to involve LinkedIn, Pinterest, Reddit and Verizon Media. The government participants also include the Cybersecurity and Infrastructure Security Agency and the Department of Justice’s National Security Division. Several social media companies have reported an increase in disinformation efforts as the election approaches. Last month, Twitter removed thousands of accounts that promoted the QAnon conspiracy theory. This week, NBC News reported that millions of QAnon conspiracy theory adherents were hidden in private groups and pages throughout Facebook. The efficacy of the coalition remains unclear. While the group will discuss active threats, it is still the responsibility of each company to mitigate election interference on its platform.