Google made $4.7 billion from the news industry in 2018, study says

Google and Facebook's role as middlemen allows them to take a huge proportion of online ad revenue away from news outlets, who are losing a crucial source of income 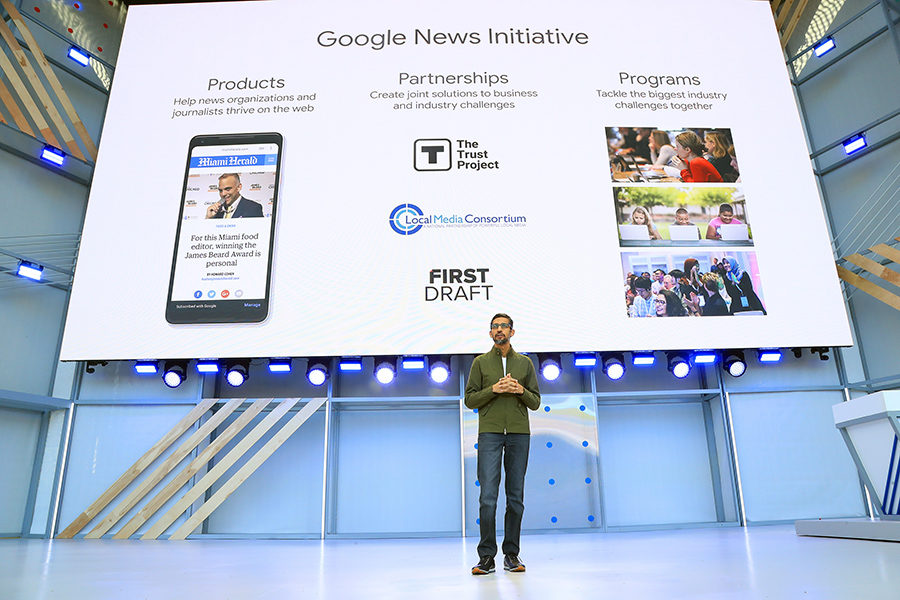 FILE -- Sundar Pichai, Google’s chief executive, speaks about Google News during an annual conference in Mountain View, Calif., May 8, 2018. A new study estimates that Google made nearly as much as the United States news industry as a whole from digital advertising on news content last year. (Jim Wilson/The New York Times)

It’s more than the combined ticket sales of the last two “Avengers” movies. It’s more than what virtually any professional sports team is worth. And it’s the amount that Google made from the work of news publishers in 2018 via search and Google News, according to a study to be released on Monday by the News Media Alliance.

The journalists who create that content deserve a cut of that $4.7 billion, said David Chavern, the president and chief executive of the alliance, which represents more than 2,000 newspapers across the country, including The New York Times.

“They make money off this arrangement,” Chavern said, “and there needs to be a better outcome for news publishers.”

That $4.7 billion is nearly as much as the $5.1 billion brought in by the U.S. news industry as a whole from digital advertising last year — and the News Media Alliance cautioned that its estimate for Google’s income was conservative. For one thing, it does not count the value of the personal data the company collects on consumers every time they click on an article like this one.

“The study blatantly illustrates what we all know so clearly and so painfully,” said Terrance C.Z. Egger, the chief executive of the Philadelphia Media Network, which publishes The Philadelphia Inquirer, the Philadelphia Daily News and philly.com. “The current dynamics in the relationships between the platforms and our industry are devastating.”

The News Media Alliance is making the study public in advance of a House subcommittee hearing on Tuesday on the interrelationship of big tech companies and the media.

Chavern said he hoped that an outcome of any conversation generated by the study would be the passage of the Journalism Competition and Preservation Act. The bill now before lawmakers would give news publishers a four-year antitrust exemption, allowing them to collectively bargain with the owners of online platforms over revenue splitting.

The bill has bipartisan support in the Senate and the House, including the chairman and ranking member of the House Judiciary’s antitrust subcommittee.

“News is an important form of content that sustains civic society,” Chavern added. “I think everybody, from readers to writers to politicians, understands that if journalism goes away, that’s a horrible outcome for whether we’re able to sustain the republic.”

Google, which did not reply to a request for comment, keeps much of its data about search and revenues in a black box alongside its algorithm.

The News Media Alliance based its new report partly on a study done by the economics consulting firm Keystone Strategy. Keystone Strategy relies on a statistic that was made public in 2008, when a Google executive estimated that Google News brought in $100 million. The study also noted how much company revenues have grown since then, among other factors.

News is a significant part of Google’s business, according to the study. Some 40% of the clicks on the platform’s trending queries are for news. That’s content that Google does not pay for, the study said, although it often presents headlines from news outlets verbatim.

Egger, of the Philadelphia Media Network, said the big tech companies should show some appreciation for the content that news publishers provide.

“There’s the potential for a beautiful codependence,” he said. “If you look at the reason they have such high engagement on their platforms, increasingly news is the No. 1 driver. Given that, they wouldn’t want to see news go away. And yet the unintended consequence is we need to share the revenue or get paid for the content that we produce.”

Two giant companies — Alphabet, which is Google’s parent, and Facebook — are major distributors for news publishers. The two of them ferry more than 80% of external traffic to various sites. That is a far cry from the analog days, when media barons controlled how their publications reached the public and collected all the ad income they generated.

But Google and Facebook don’t steer news consumers to news sites out of altruism. Rather, their middleman role allows them to take a huge proportion of online ad revenue. As a result, legacy news outlets have lost a crucial source of income over the last couple decades, which has led them in most cases to shrink or disappear.

The big tech companies “like this business,” Chavern said. “It’s a good business, where you write for them.”

Tweets by @forbesindia
Where is India Inc's waste going?
The making of a YouTube radical