Where is India Inc's waste going?

With guidelines in place for plastic and e-waste, corporates are moving towards managing their waste more responsibly, in the process bringing formalisation to the sector 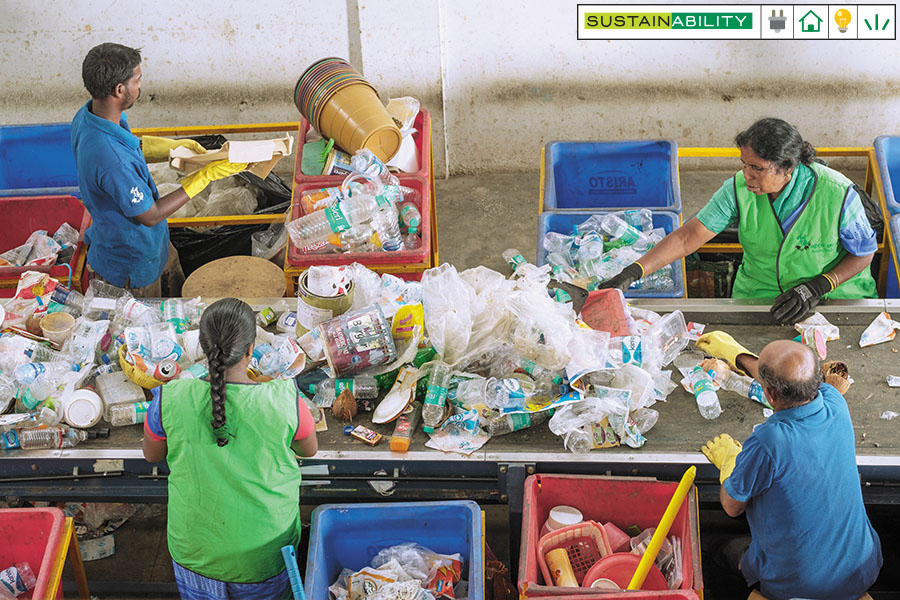 Right in the middle of Electronic City in Bengaluru—one of the largest industrial townships in India—is the Infosys headquarters. The 80-acre campus is perhaps an ideal model of what the circular economy could look like: Their aim is to achieve zero waste.

“In 2008, we started the Green Initiatives programme to reduce our environmental footprint. We took on some big goals for energy and water reduction, as well as diverting waste from landfills to either recyclers or composting,” says Guruprakash Sastry, regional head-infrastructure/green initiatives, Infosys. Today, each Infosys campus across India has its own sewage treatment plant, biogas plant and organic waste converter.

The Bengaluru campus, with about 30,000 employees and 10 food courts, generates about 2.5 tonnes of food waste every day. “We have installed a biogas plant [with a capacity of 2 tonnes] close to the food courts to treat the food waste. The biogas generated is cleaned and piped into the kitchen to replace LPG cylinders,” says Sastry, adding that awareness about waste segregation at the first stage makes it easier to process different kinds of waste. Currently, the biogas generated is equivalent to almost 100 kg LPG per day. “Earlier, once the food was discarded we didn’t know what was happening to it. Now we have full control and we are converting it to energy,” says Sastry.

On the campus, garden waste, too, is collected and transported to a facility in Sarjapur, where it is treated with organic waste convertors. The resulting fertiliser is used on the campus.

While companies such as Infosys (and to an extent Tech Mahindra, HCL and TCS) are working on their waste management practices, the Electronic City Industrial Township Authority (ELCITA) is trying to help smaller companies manage their waste better. There are about 200 companies in the township. “In 2012, we rented a place within ELCITA and started a waste management facility with a capacity of handling 250 kg per day. Today, we have 110 companies on board and are able to process about 2 tonnes of dry waste per day,” says NS Rama, CEO, ELCITA. The association was declared as an industrial township in 2013 by the Karnataka government, post which cleanliness and waste management became a responsibility. However, ELCITA hasn’t made it mandatory for all companies to be part of its waste management programme.

ELCITA has outsourced its waste management to Hasiru Dala, a social enterprise, to process dry waste. “Recently we installed a conveyer belt, which makes it easier for women to segregate waste. Each woman has four bins around her and has to collect a given set of items only. It is more dignified than having them sit around garbage. It is like a reverse assembly line,” adds Rama. Companies that don’t segregate waste are charged for the mixed and reject waste by Hasiru Dala, while they pay for the dry waste they collect and sell to recyclers. ELCITA’s aim is to reach the zero waste-to-landfill stage soon.

In January 2018, Coca Cola made a commitment to a ‘world without waste’, under which, by 2030, it plans to recover and recycle the equivalent of every package it puts in the marketplace. The company’s bottling entity in India, Hindustan Coca Cola Beverages Private Limited (HCCBPL), launched a programme in partnership with the United Nations Development Programme (UNDP). “We wanted to try and work out an inclusive and end-to-end solution for waste pickers, the in-between economy, and for recyclers,” says Umesh Malik, vice president, public affairs and communications, Hindustan Coca-Cola Beverages.

The partnership,  called Prithvi, aims to lead sustainable plastic waste management practices in India that will encourage segregation, collection and recycling. “Waste pickers are enrolled to pick up this material and bring it to a recovery facility [which will be run by Hasiru Dala in Bengaluru] that we are setting up in collaboration with urban local bodies and municipal corporations,” adds Malik. So far, Coca Cola has collected more than 10,000 tonnes of all types of plastic from across the country.

***** According to the Press Information Bureau, India generates 62 million tonnes per annum (TPA) of mixed waste, with an average annual growth rate of 4 percent. India consumes about 16.5 million TPA of plastic, according to data from PlastIndia Foundation, and generates about 2 million TPA of e-waste, of which only 438,085 TPA is recycled, as per an 2018 Assochem-NEC report.

The numbers are a clear indication of the desperate need for guidelines when it comes to managing waste, both on the producer end as well as the consumer end. This is where the Extended Producer Responsibility (EPR), a worldwide policy approach, plays an important role.

The Central Pollution Control Board (CPCB) has set guidelines to ensure EPR for plastic and e-waste, with the aim to establish a reverse collection mechanism and recycling of end-of-life waste. The guidelines came into force in 2011, but amendments in 2016 and 2018 have made them more stringent, with companies being given targets—10 percent of total waste must be collected, increasing it by 10 percent every year.

While Coca Cola complies with EPR through its Prithvi programme, Lenovo has been managing its e-waste with partner organisations like Karo Sambhav to create awareness and collect waste. “Earlier, it used to be that once you have sold the product your responsibility was over, but now with EPR you have to collect the end-of-the-life product,” says Rahul Agarwal, manager-environmental affairs and sustainability, Lenovo India, which has reached 19 states and 52 cities. “We have been working in this space of e-waste since 2011, even before the guidelines came into place. This is a worldwide concept that we are very supportive of.”

Though waste management has a long way to go, the guidelines have formalised the sector, and has become a hotbed for startups. “Recycling in India was almost non-existent, and most of it was part of the informal sector. Thanks to these guidelines, there is some good recycling happening in the formal sector,” says Wilma Rodrigues, founder and CEO of Saahas Zero Waste, which acts as a collection and segregation point between corporates and recyclers.

Saahas, started in 2001 as an NGO, changed its business model to being a private limited company in 2013, because, says Rodrigues, as an NGO they weren’t being treated seriously enough. Currently, its revenues come from sale of waste and service fees; its  turnover in FY18-19 was `15.1 crore. Saahas’ clients include RMZ, Microsoft and Tesco.

The waste collected from different companies comes to Saahas’ main collection centre in Bengaluru, and is then sent to recyclers. Plastic waste goes for co-processing to cement kilns. Saahas is focusing on bringing in systems for reverse logistics so that there can be a smooth transition from the informal to the formal sector.

Rodrigues believes that with rules in place, and support from larger companies, the system of waste management can be cleaned up. “Health-related issues and child labour are a major problem in the informal space. And when the waste goes to the informal sector, things that can be sold are sold, but the rest of it gets dumped in the landfill. This eventually leads to pollution. We need to find a way to integrate the informal and formal sectors,” says Manvel Alur, founder of Environmental Synergies in Development, an NGO that creates awareness about waste management.

Though EPR guidelines are in place, responsible waste management in the corporate sector has a long way to go. According to the CPCB website, the import licences of 10 tech companies were recently suspended for not complying with EPR rules. News reports also suggest that there are finished goods and raw materials worth `5,000 crore of companies including Apple, Samsung, Vivo, HP, Canon, Motorola stuck at customs for violating EPR guidelines.

Dealing with corporates also remains a challenge. “Last year, the CPCB sent out letters to companies to ensure they got their authorisation [for EPR]. But there is an unwillingness to take up responsibility. The disappointment is also with senior leadership teams for not being adequately engaged in this issue. We have reached out to senior management [of various companies], and they put you back to facilities, and facilities are not given a budget,” says Rodrigues.

One of the other challenges is that there are no guidelines for any other form of waste, apart from plastic and e-waste.

“Big brands in the space of glass, metal, fabric, end-of-life vehicles have no liability when it comes to its waste, since there are no regulations. Ideally, guidelines should be in place for each of these sectors. This will eventually lead to more recycling companies being set up and hence more employment being generated,” adds Rodrigues.

Companies also need to take EPR far more seriously, believes Nalini of Hasiru Dala, “EPR should be a part of every company’s profit and loss statement, only then is it EPR. This should be taken as a cost of their product.”

Tweets by @forbesindia
If seeing the world helps ruin it, should we stay home?
Google made $4.7 billion from the news industry in 2018, study says