If seeing the world helps ruin it, should we stay home?

To people who like to travel, these are morally bewildering times. The number of airline passengers worldwide has more than doubled since 2003, and unlike with some other pollution sources, there's not a ton that can be done right now to make flying significantly greener 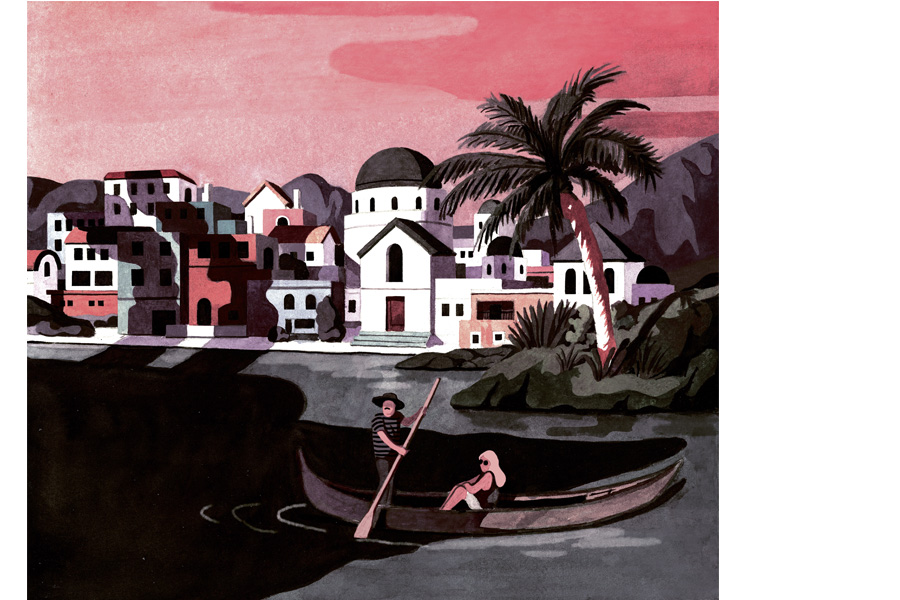 Going someplace far away, we now know, is the biggest single action a private citizen can take to worsen climate change. One seat on a flight from New York to Los Angeles effectively adds months worth of human-generated carbon emissions to the atmosphere. The glaciers are melting, the coral reefs are dying, Miami Beach is slowly going under.

Quick, says a voice in your head, go see them before they disappear! You are evil, says another voice. For you are hastening their destruction.

To a lot of people who like to travel, these are morally bewildering times. Something that seemed like pure escape and adventure has become double-edged, harmful, the epitome of selfish consumption. Going someplace far away, we now know, is the biggest single action a private citizen can take to worsen climate change. One seat on a flight from New York to Los Angeles effectively adds months worth of human-generated carbon emissions to the atmosphere.

And yet we fly more and more.

The number of airline passengers worldwide has more than doubled since 2003, and unlike with some other pollution sources, there’s not a ton that can be done right now to make flying significantly greener — electrified jets are not coming to an airport near you anytime soon.

Still, we wonder: How much is that one vacation really hurting anyone, or anything?

It is hard to think about climate change in relation to our own behavior. We are small, our effects are microscopically incremental and we mean no harm. The effects of climate change are inconceivably enormous and awful — and for the most part still unrealized. You can’t see the face of the unnamed future person whose coastal village you will have helped submerge.

But it turns out there are ways to quantify your impact on the planet, at least roughly. In 2016, two climatologists published a paper in the prestigious journal Science showing a direct relationship between carbon emissions and the melting of Arctic sea ice.

Each additional metric ton of carbon dioxide or its equivalent — your share of the emissions on a cross-country flight one-way from New York to Los Angeles — shrinks the summer sea ice cover by 3 square meters, or 32 square feet, the authors, Dirk Notz and Julienne Stroeve, found.

In February, my family of three flew from New York to Miami for what seemed like a pretty modest winter vacation. An online carbon calculator tells me that our seats generated the equivalent of 2.4 metric tons of carbon dioxide.

Throw in another quarter-ton for the 600 miles of driving we squeezed in and a bit for the snorkeling trip and the heated pool at the funky trailer-park Airbnb, and the bill comes to about 90 square feet of Arctic ice, an area about the size of a pickup truck.

When I did that calculation, I pictured myself standing on a pickup-truck-sized sheet of ice as it broke apart and plunged me into frigid waters. A polar bear glared hungrily at me.

Calculating the harm
And what of my vacation’s impact on my fellow man? Actually, academics have attempted to calculate that, too. Philosophers, not climatologists. But still.

In 2005, a Dartmouth professor, Walter Sinnott-Armstrong, wrote in a journal article provocatively titled “It’s Not My Fault: Global Warming and Individual Moral Obligations” that he was under no moral obligation to refrain from taking a gas-guzzling SUV for a Sunday afternoon joy ride if he felt like doing so.

“No storms or floods or droughts or heat waves can be traced to my individual act of driving,” he wrote. Conversely, “If I refrain from driving for fun on this one Sunday, there is no individual who will be helped in the least.”

Other philosophers questioned his reasoning.

Professor John Nolt of the University of Tennessee took a stab at measuring the damage done by one average American’s lifetime emissions. (The average American generates about 16 metric tons of carbon dioxide-equivalent a year, more than triple the global average.)

Noting that carbon stays in the atmosphere for centuries, at least, and that a U.N. panel found in 2007 that climate change is “likely to adversely affect hundreds of millions of people through increased coastal flooding, reductions in water supplies, increased malnutrition and increased health impacts” in the next 100 years, Nolt did a lot of division and multiplication and arrived at a stark conclusion:

“At a ratio of one life’s causal activities per one life’s detrimental effects, it causes the equivalent of a quarter of a day’s severe harm,” he wrote.

“In other words, going for a Sunday drive has the expected effect of ruining someone’s afternoon.”

Multiply that joy ride by a three-person Florida vacation and you’ve ruined someone’s month. Something to ponder while soaking up UV-drenched rays on a tropical beach. 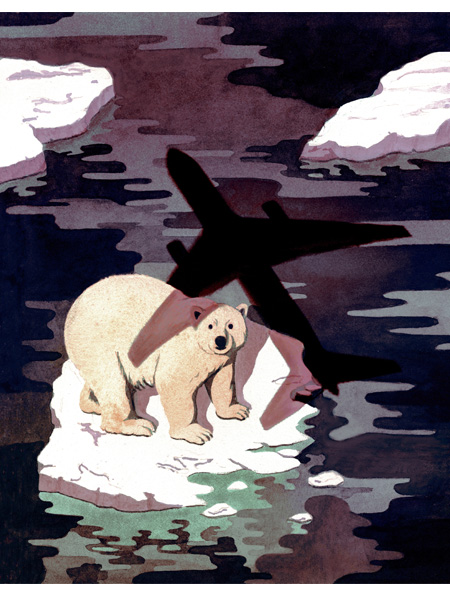 Going someplace far away, we now know, is the biggest single action a private citizen can take to worsen climate change. One seat on a flight from New York to Los Angeles effectively adds months worth of human-generated carbon emissions to the atmosphere. Ships? Even worse
There are alternatives to flying, of course. Perhaps a cruise? After all, there’s more ocean than there’s been in thousands of years. With the Northwest Passage now mostly ice-free in the summer, new vistas have opened. One cruise company runs polar bear tours to check out “the Arctic’s ‘poster boy.’”

Perhaps not. Bryan Comer, a researcher at the International Council on Clean Transportation, a nonprofit research group, told me that even the most efficient cruise ships emit 3 to 4 times more carbon dioxide per passenger-mile than a jet.

While most cruise ships run on highly polluting heavy fuel oil, many have begun using “scrubbers” to remove toxic sulfur oxides from their exhaust. But the scrubbers discharge these and other pollutants into the ocean instead, and they’ve been banned by seven countries and several U.S. states.

A spokeswoman for Cruise Lines International Association, a trade group, said that the scrubbers comply with the new 2020 standards for air and water quality set by the International Maritime Organization, a U.N. agency. The spokeswoman, Megan King, added that it was not fair to compare emissions from ships and jets because a jet is just a transportation vehicle while a cruise ship is a floating resort and amusement park.

There’s always driving, which is less carbon intensive than flying, especially if there are multiple passengers. But “less” is relative, and most long trips are out of practical driving range anyway.

Considering carbon offsets
Maybe there is a justification out there somewhere: Personal decisions alone won’t stop global warming — that will take policy changes by governments on a worldwide scale. Tourism creates millions of jobs in places starved for economic development. Carbon offsets can effectively cancel out our footprint, can’t they?

Carbon offsets do seem to offer the most direct way to assuage traveler’s guilt. In theory, they magically expiate your sins. You give a broker some money (not a lot of money either — carbon offsets can be bought for $10 per metric ton). They give it to someone to plant trees, or capture the methane from a landfill or a cattle operation, or help build a wind farm, or subsidize clean cookstoves for people in the developing world who cook on open fires. All these things help cut greenhouse gas.

But nothing is that simple in practice. Carbon-offset people talk about concerns with things called additionality, leakage and permanence.

Additionality: How do you know the utility would not have built the wind farm but for the money you gave them?

Permanence: How do you know the timber company that planted those trees won’t just cut them down in a few years?

Leakage: How do you know the landowner you just paid not to cut down an acre of rainforest won’t use the money to buy a different acre and clear that?

“Whether someone would have planted trees anyway, or taken some other action like building a housing development, is ultimately unknowable and something you have to construct,” said Peter Miller, a policy director for the Natural Resources Defense Council and a board member of the Climate Action Reserve, the country’s biggest carbon offset registry. “It’s an endless debate.”

Some carbon offsets are surer bets than others. “With methane capture,” Miller said, “once you capture that methane and you burn it — you’re done. It’s not in the atmosphere, it’s not going in the atmosphere. You’ve got a credit that’s achieved and you’ve avoided those emissions forever.”

Not flying at all would be better, Miller said, “but the reality is that there’s lots of folks that are going to do what they’re going to do.” For them, offsets are a lot better than nothing.

But some climate experts call offsets a cop-out.

“It’s like paying someone else to diet for you,” said Alice Larkin of the University of Manchester’s Tyndall Centre for Climate Change Research, who has not flown since 2008.

She said that while governments do need to take tough action, they derive their courage to do so from the conduct of citizens. “In my idea, people move first,” she said.

Offsets, she said, encourage a break-even mindset when what’s needed to avert disaster is to slash fossil-fuel consumption immediately.

But the world still beckons
I’d like to be able to tell you that knowing what I’ve learned reporting this piece, I have sworn off long-distance travel.

But actually this summer, we’re going to Greece, with a stopover in Paris. Carbon footprint of plane tickets: 10.6 metric tons, enough to melt a small-apartment-sized piece of the Arctic.

Mostly we’re going because of things we saw last time we were there. The tiny beach at the base of the towering cliff. The playground where the little children played past midnight while their parents and grandparents sat chatting. Chubby partridges pecking around the ruined temple of Poseidon.

Before we go, we will buy enough offsets to capture the annual methane emanations of a dozen cows — that’s several times what is needed to balance out the carbon effects of our flights. May they help keep a polar bear afloat.

Tweets by @forbesindia
How nuclear bomb tests are helping to identify art forgeries
Where is India Inc's waste going?