How the promise of a $120 billion Uber IPO evaporated

Wall Street's biggest banks, Morgan Stanley and Goldman Sachs, calculated Uber's valuation at $120 billion; nine months later, the ride-hailing company is worth about half that much 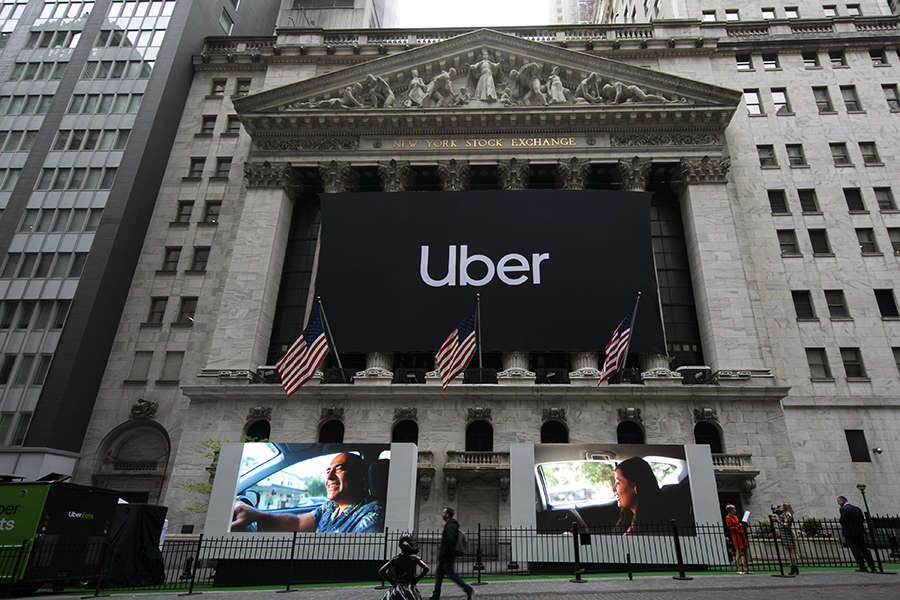 Uber signage outside of the New York Stock Market in Manhattan, May 10, 2019. Uber’s offering was supposed to be a crowning moment for the ride-hailing company. But it suffered setback after setback and ultimately resulted in pointed questions for all involved.
Image: Jeenah Moon/The New York Times

Last September, Uber’s top executives were pitched by some of Wall Street’s biggest banks, Morgan Stanley and Goldman Sachs.
The bankers’ presentations calculated Uber’s valuation almost identically, hovering around one particular number: $120 billion. That was the figure the bankers said they could convince investors Uber was worth when it listed its shares on the stock market, according to three people with knowledge of the talks. Uber’s chief executive, Dara Khosrowshahi, and chief financial officer, Nelson Chai, listened and discussed the presentations, these people said. Then they hired Morgan Stanley and Goldman Sachs to take the company public — and to effectively make the $120 billion valuation a reality.

Nine months later, Uber is worth about half that figure. The ride-hailing firm went public last week at $45 a share and has since dropped to around $41, pegging Uber’s market capitalization at $69 billion — and officially crowning it as the stock market debut that lost more in dollar terms than any other American initial public offering since 1975. How Uber’s offering turned into what some are now openly calling a “train wreck” began with the $120 billion number that the bankers floated. The figure leaked last year, whipping up a frenzy over how Uber could soon become the biggest American company to list on an American stock exchange — larger even than Facebook, which went public in 2012 at a whopping $104 billion valuation. But for Khosrowshahi and Chai, the $120 billion number turned Uber’s IPO process into an exercise in managing expectations. Some large investors who already owned Uber shares at cheaper prices pushed back against buying more of the stock at such a lofty number, said people familiar with the matter. Their appetite for Uber was dampened further by the company’s deep losses and slowing growth in regions like Latin America. And Uber had to contend with unforeseen factors, including fraying trade talks with China that spooked the stock market in the same week that the company decided to go public. The result has created a host of pointed questions for all involved in Uber’s IPO, from Khosrowshahi and Chai to the lead underwriters at Morgan Stanley, Goldman Sachs and Bank of America. While Uber raised $8.1 billion from its offering and reaped billions of dollars in returns for its early investors and founders, what should have been a climactic moment for a transportation colossus instead became an embarrassment. This account of Uber’s IPO was based on interviews with a dozen people involved in or briefed on the process. Many asked to remain anonymous because they were not authorized to speak publicly. Representatives from Uber, Morgan Stanley and Goldman Sachs declined to comment. For years, Uber was an investor darling. As a privately held company, it gorged on capital from venture capital firms like Benchmark and GV, mutual fund firms like Fidelity Investments, and companies like SoftBank. Its private valuation shot up from $60 million in 2011 to $76 billion by August 2018. One growth headache was connected to Uber’s biggest investor, SoftBank. The Japanese company, which has a $100 billion Vision Fund that it uses to invest in all manner of companies, has poured capital into technology startups including Didi Chuxing, China’s biggest ride-hailing company, and 99, a transportation startup in Latin America. In January 2018, Didi agreed to acquire 99. Both SoftBank and Didi also started directing funds toward pushing deeper into Latin America; SoftBank eventually created a new $5 billion fund earmarked specifically for investing in Latin American companies. For Uber, the timing was terrible. The region was one of its most promising growth areas and its competition had ramped up. By this February, the damage in Latin America began showing up in Uber’s results in the form of slowing growth. Uber’s food delivery business, UberEats, was under attack as well. SoftBank had sunk hundreds of millions of dollars into DoorDash, a food delivery company in the United States. More recently, SoftBank invested $1 billion into Rappi, a food delivery company in Latin America. Uber had to spend more to battle those rivals. SoftBank and Didi declined to comment. (Uber and Didi own shares in each other as well.) In March, another problem cropped up. Uber’s rival in North America, Lyft, went public and promptly fell below its offering price on its second day of trading. Investors appeared skeptical about whether Lyft could make money, setting a troublesome precedent for Uber. By the time Uber made its IPO prospectus available in April, it had already told some existing investors that its offering could value it at up to $100 billion — down from the initial $120 billion. The company soon hit other obstacles. Earlier this month, President Donald Trump tweeted that he wanted to raise tariffs on $200 billion of Chinese goods, unsettling global stock markets. Last Wednesday, the day before Uber priced its IPO, Lyft reported a $1.14 billion loss for its first quarter, renewing questions about the health of ride-hailing businesses. Uber’s executives, board and bankers discussed the final pricing of the stock sale last Thursday. Several board members pushed for a price at the higher end of the $44- to $50-a-share range, said the people briefed on the situation. But Morgan Stanley, Goldman Sachs and others agreed that it needed to be lower, they said. The list of orders from potential investors, known in Wall Street jargon as the “book,” showed that the most desirable investors — the big asset managers who were most likely to hold onto the shares, even in tough times — were interested only in the lower price. The final price: $45 a share. On Wednesday, Uber closed at $41.29, more than 8% below its offering price.

Tweets by @forbesindia
US-China Trade War: The global economy was improving. Then the fighting resumed.
Future of buildings: Putting the tech in architecture