How to (gently) help your aging parents manage their money 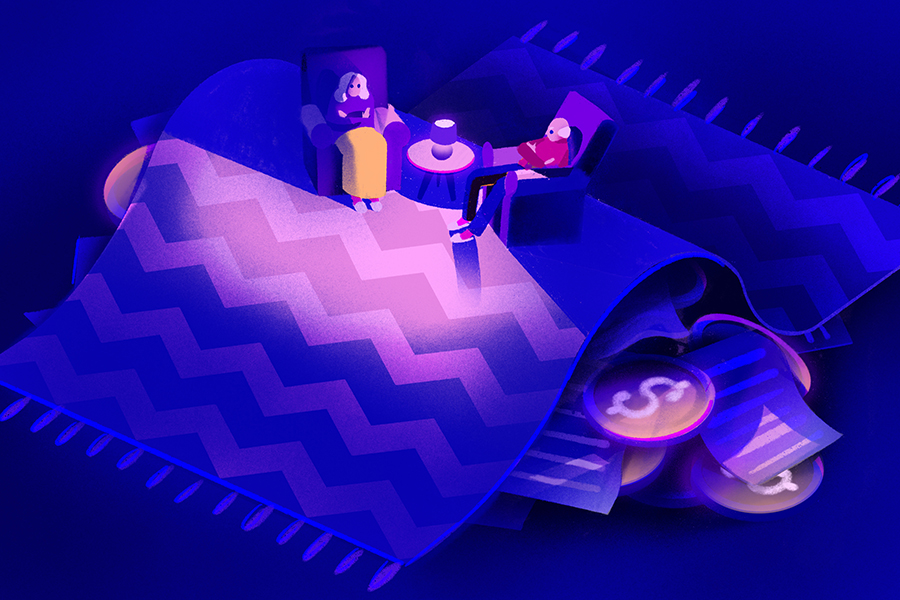 Helping parents with their finances before a crisis erupts is a smart move, but a tricky one. Experts suggest some strategies that work. (Thomas Pullin/The New York Times)

When Reagan Alonso, a semiretired nurse living in Jacksonville, Florida, first gently offered to help her aging mother with her finances, she encountered resistance.

Her mother, now 88, was born in Ohio, and “being from the Midwest and of that generation, we’re very much, ‘you don’t talk about money,’” Alonso, 60, said. “When it came to the point when I told her I have to put my name on your checking account, she was at first very suspicious. I told her ‘the checkbook is going to be with you, and I’m not taking any control away from you.’”

Family conversations about money are rarely easy. But that is especially true with older parents who are still relatively capable of managing their lives — and do not want their children to do it for them.

As we get older, “our cognitive abilities are not what they were, but unfortunately our confidence continues to be very high,” said Liz Weston, a Los Angeles-based certified financial planner, author and writer for the website NerdWallet. “It’s like driving a car with the parts falling off and we’re insisting everything is fine until we hit the tree.”

But the idea is to gain control of that car before the crash.

“It takes a lot of patience and persistence,” said Lauren Locker, a certified financial planner in Passaic, New Jersey. “This is the kind of conversation that needs to start early on, because sometimes it can take years” for parents to be willing to accept help.

Before the parental conversation, there needs to be a sibling conversation, Locker said. That is easier in some families than others, but brothers and sisters need to be on the same page, she said, about approaching the parent.

That does not mean the discussions need to be with the entire family. The child who is closest to the parents (psychologically or logistically), the most comfortable with tough conversations or the most financially savvy can initiate it — as long as all sisters and brothers are kept informed.

Then — the experts agreed — do not approach the issue by simply asking if your parents would like help with their finances. That implies, no matter how compassionately the question is asked, that they are not capable of handling their affairs.

Focus not on what they might or might not be doing, but on what the family as a whole needs to do to help, said Carolyn McClanahan, a certified financial planner and medical doctor in Jacksonville. And do it with empathy and a lack of judgment.

For instance, if a family member is already the point person on finances, he or she can say “I’m honored you put me in charge, and I’m concerned that I don’t have all the information I need. At some point in life, something is going to happen, and I want to make sure we’re ready,” she said. “It’s more concern about yourself doing a good job instead of making them sound like they’re doing a bad job.”

And, try asking questions — kindly — that get to the root of any resistance.

It can be helpful to point out that the anxieties are not just about whether money is being handled correctly, but also to ensure that the government is not going to get a bigger bite of any inheritance than necessary.

For example, the father of one of McClanahan’s clients had 60 stock certificates in a locked box, “which would have been a huge probate nightmare,” she said. She convinced him to move the stocks into a custodial brokerage account, so each stock would not have to be probated separately. They are also easier to keep track of that way and require far less paperwork.

He also was going to make his children the beneficiaries of his individual retirement account and give money to charity, but, for tax purposes, it made much more sense to do it the other way around, she said. An heir would have to pay taxes on distributions from the retirement account, but the charity would not, while the cash would go to the children without any taxes to be paid.

But if a conversation does not work, McClanahan suggested asking whether the parent would be willing to have an objective third person involved, preferably a financial planner who charges an hourly fee, not a commission, and is a fiduciary. The planner can keep that information confidential until the incapacitation or death of the parent, when the planner can share the information with an appointed family member.

“You can offer three names, and then leave it with the parent for a while,” Locker said about choosing the third person. “The parent needs to process and not feel pressured to do something.”

Of course, it is not a surprise that certified financial planners would suggest hiring a planner, but “you definitely want someone who has expertise in this,” said Weston, who has written books on finance, but does not see clients. “The financial planner has hopefully been through this a lot and may have thought of scenarios you haven’t thought of.”

And financial planners often hold meetings jointly with the children and the parents, finessing the situation. For example, Alonso said, her father worked at General Electric and all their stocks were with that company.

“My dad was a GE company man to the T,” she said. “My mom felt if she sold off the stocks, it would be crushing the memory of my dad.”

But then McClanahan, who was the financial planner first for Alonso and then for her mother, “gradually got her to understand diversifying and how the stock market has changed since the ’70s.”

McClanahan added that, in an ideal world, people will not wait until their declining years to bring their children into their financial picture. She co-founded Whealthcare Planning with the idea of helping people plan for the financial challenges of aging. Among other things, it provides interactive assessments of one’s knowledge of their own finances and helps evaluate those at risk for poor financial decision-making. The cost starts at $39 annually.

In some cases, knowing more about finances can help alleviate an anxious parents’ fear that they will run out of money or will not be able to leave an inheritance. In other cases, it can stave off disaster.

Ryan Patterson of Austin, Texas, said he was concerned that his parents, who live in San Antonio, might not really understand their long-term financial picture.

They are in their early 70s, facing serious health issues and clearly worried about money, he said, but it was hard to ask for help. The catalyst, he said, was when his father, who is a percussionist in the San Antonio Symphony, inherited his parents’ home and wanted to discuss how to invest the money when he sold it. He turned to his elder son.

Patterson knew what problems could arise as parents age. He helped to support his grandmother, who had no understanding of her finances when her husband died, or “even how she would pay the bills the next month. I didn’t want that to happen with my parents,” he said.

When they finally all sat down together, Patterson, who is chief executive of SeniorAdvice.com, a senior housing locator, realized there could be a real shortfall in the future if they did not act soon.

“There was never an intention to live beyond their means, but some things slipped through the cracks,” he added.

Patterson, 42, has a 6-month-old son; he is confident his own finances are in order, he said. “I want to make sure my son is never in a position where he has to take care of me.”