Contemporary art in the country is seen as undermining religion, dignity and morality of Afghan tradition. Despite the perils, Afghan artists have, in the past two decades, consistently portrayed their country and its many facets 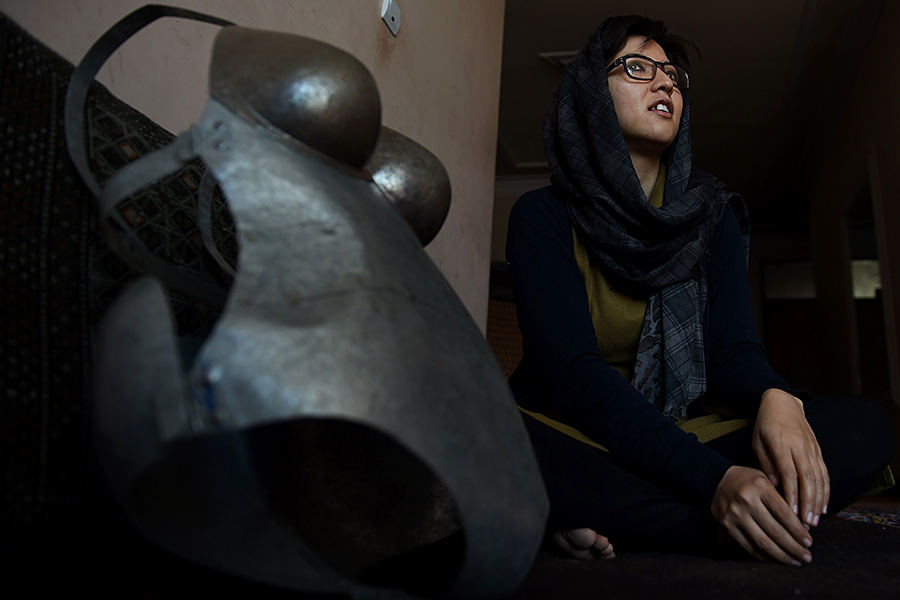 Afghan artist Kubra Khademi, 27, sits alongside a suit of armour she made as a protest against sexual harrassment during an interview with AFP in Kabul on March 8, 2015. A young Afghan artist who walked through the streets of Kabul wearing a suit of armour featuring large breasts and buttocks in protest against sexual harassment has gone into hiding after receiving death threats. Kubra Khademi, 27, had walked around in the costume in central Kabul on February 26 hoping to cast a spotlight on groping and inappropriate touching of women in public spaces in Afghanistan.
Image: SHAH MARAI/AFP via Getty Images

On the afternoon of Feb. 26, 2015, artist Kubra Khademi strapped a suit of metal armor over her clothes and headed outside. The armor, which she had cobbled together in the workshop of a local blacksmith, had bulbous breasts and an ample bottom. It was the centerpiece of a carefully planned street performance.

Only this wasn’t just any street: It was a busy thoroughfare in Kabul, the capital of Afghanistan. Sheathed in her bulging suit, Khademi walked along the road in a silent eight-minute performance. By the time she left, traffic had stopped, and a mob of menacing men had formed.

“They were insulting me and making fun of me, saying, ‘She’s crazy; she’s a foreigner; she’s lost her mind; she’s a prostitute,’ ” the artist recalled in a telephone interview from Paris, where she now lives. “Yet, had I not put on this performance, I would have been unhappy. It was a complete success. It shook everyone up and brought the debate brazenly out into the open.”

Khademi said her performance reflected everyday reality for women in Afghanistan, who face sexual harassment and aggression everywhere — at home, at work, on the street.

“There isn’t a single woman in Afghanistan who hasn’t been violated on some level in her lifetime,” Khademi said. “We live in a culture of violation.” She recalled suffering sexual abuse at age 5, and longing, as a child, for protective armor.

Khademi’s metal suit and a video of her performance are among the 60 or so artworks in the exhibition “Kharmohra: Art Under Fire in Afghanistan,” running at the Mucem museum in Marseille, France, through March 1. The show features paintings, drawings, photographs, installations and videos by 11 Afghan artists, most of whom still live in their homeland.

That homeland has now endured some four decades of conflict. Afghanistan was occupied by the Soviet Union from 1979 to 1989, overtaken by the Taliban, then invaded in 2001 by the United States and its allies. Today, the country is on the brink of civil war, with the government in Kabul controlling about half the territory and the Taliban the other half.

Making art there is a hazardous pursuit.

“Contemporary art is not well regarded in Afghanistan,” said Guilda Chahverdi, the “Kharmohra” show’s Iranian-born curator, as she pointed to works in the Marseille museum. “It’s seen as undermining religion, morality and the dignity of Afghan tradition. Anything that undermines that dignity is unacceptable and must be eradicated,” she added.

Chahverdi, who lived and worked in Kabul between 2005 and 2013, said that, because of an association with the “impure” West, art and culture were “clearly a target of the Taliban.”

During the decade or so that U.S.-led coalition forces were in Afghanistan, the country experienced a “mini golden age,” according to Chahverdi. Western cultural centers, exhibitions and workshops proliferated. A new art school, the Center for Contemporary Art Afghanistan opened, at first admitting students of both sexes and later becoming a women-only institution. Documenta, the German exhibition of international art held every five years, staged a satellite event in Kabul in 2012, drawing 27,000 visitors.

The French Institute in Kabul, which Chahverdi ran from 2010 to 2013, reopened during the period, hosting weekly events in its exhibition spaces, two theaters and 450-seat auditorium. Yet as Western troops began pulling out, the institute became a target. In December 2014, a theater performance about terrorism was attacked by a teenage suicide bomber, who killed three people.

Despite the perils, Afghan artists have, in the past two decades, consistently portrayed their country and its many facets.

Painter M. Mahdi Hamed Hassanzada moved back to Afghanistan from neighboring Iran in 2009 to play a part in its creative rebirth. “There were international armies and people from all over the world, and they invested some money, and there were some opportunities,” he said in a telephone interview.

But gradually, everyday life in Afghanistan started feeling unsafe, Hassanzada said, especially for gay men like him. He taught at the Center for Contemporary Art, which received regular threats from militants who considered it anti-Islamic. Suicide bombings became a daily occurrence in Kabul.

“I was in the middle of the nightmare,” he recalled. His 2015 painting “Kabus,” which means “Nightmare,” shows a terrified, goggle-eyed figure, which the artist said represented himself.

In 2016, Hassanzada’s 66-foot mural for the Cactus Cafe, an artist-run Kabul space for exhibitions, concerts and readings, was destroyed by the cafe’s managers after religious extremists said that monsters in the painting were blasphemous images of the devil. That year, Hassanzada moved to Istanbul, and later to Chicago, where he now lives and works.

For those who stay behind, particularly women, life can be a perpetual struggle, as work by the female artists in the exhibition boldly illustrates.

“Protest” (2008), a photograph by Farzana Wahidy, shows the naked torso of a woman who has survived self-immolation, covered with knotty lesions. She is one of the numerous Afghan women who set themselves on fire to escape a life of domestic violence and confinement.

In other pictures by Wahidy, a bride in a long white gown poses in the middle of bombed-out ruins, and another sits on a bed beside her new husband, staring despondently at the camera.

Artist Zolaykha Sherzad transforms the top-to-toe blue veil or burqa, known in Afghanistan as a chadri and viewed by some in the West as a symbol of entrapment, into a sculptural installation. The work, “Hawa-ye Azad” (or “Open Air”), is a towering, swirling swath of pleated blue silk, suspended from the ceiling. As the artist explains in the exhibition catalog, the veil is a garment that, paradoxically, made older generations of women free by allowing them to leave the house.

The exhibition’s other conspicuous theme is the deadly violence that has plagued Afghanistan in recent years and drawn international media coverage.

The Taliban-led attack on the Taverne du Liban restaurant in Kabul in January 2014 — which left 21 people dead — is the subject of a performance piece by artist Kaveh Ayreek. Two days after the coordinated assault, he joined a commemorative peace march. Three times during the procession, he collapsed onto the ground, acting out the victims’ death throes, while a member of his theater company traced the contours of his body on the pavement. (The performance is remembered in the exhibition through photographs, and silhouettes drawn on the gallery floor.)

The December 2015 mob lynching of Farkhunda Malikzada, a theology student who was falsely accused of burning a Quran, is the subject of Latif Eshraq’s dark painting “Farkhunda” (2017). It shows Malikzada’s lacerated body surrounded by a forest of cloaked figures.

In a text message exchange from Kabul, where he lives and works, Eshraq said he had no hesitation in representing the ordeal on canvas, despite the risks. “A painter speaks through painting. Are we to fall silent when there is a danger?” he asked.

Few countries in the world have suffered so many invasions and upheavals, yet these recent events are not taught in Afghan schools, Chahverdi said. She suggested that, given the deep divisions and conflicting viewpoints, there was no single acceptable narrative.

The warring factions in Afghanistan may be “busy destroying,” said Khademi, the performance artist, “but we are very peacefully writing this history.”

Tweets by @forbes_india
Comic: Jeff Bezos, the real Amazon Prime
This is the cost of your beauty routine