A group of alleged staff members, calling itself 'ethical employees', is said to have brought complaints forward over opaqueness in large contracts, naming CEO Salil Parekh among others 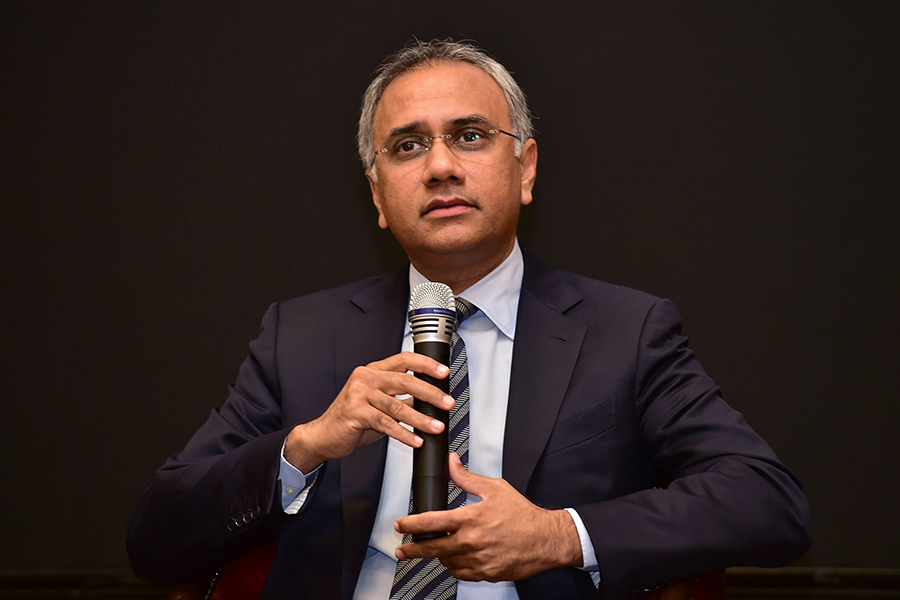 Infosys, which reported a record total contract value of large contracts signed in its fiscal second quarter, has become embroiled in a whistleblower complaint that points to executives at the very top. The whistleblowers comprise an anonymous group of alleged staff that calls itself ‘ethical employees.’ In a letter dated September 20, to the board of directors of the Bengaluru company, they said: “We have high respect for all of you and bring to your notice the unethical practices of CEO in recent quarters. Same measures are taken up in current quarter also to boost short term revenue and profits. We are Infosys employees and we have emails and voice recordings.” CEO Salil Parekh has bypassed reviews and approvals for large contracts and has directed subordinates to make wrong assumptions to show margins. The group has sent letters of its complaints to both the board of directors of Infosys and to the US Securities Exchange Commission. Infosys is listed in Mumbai and New York. 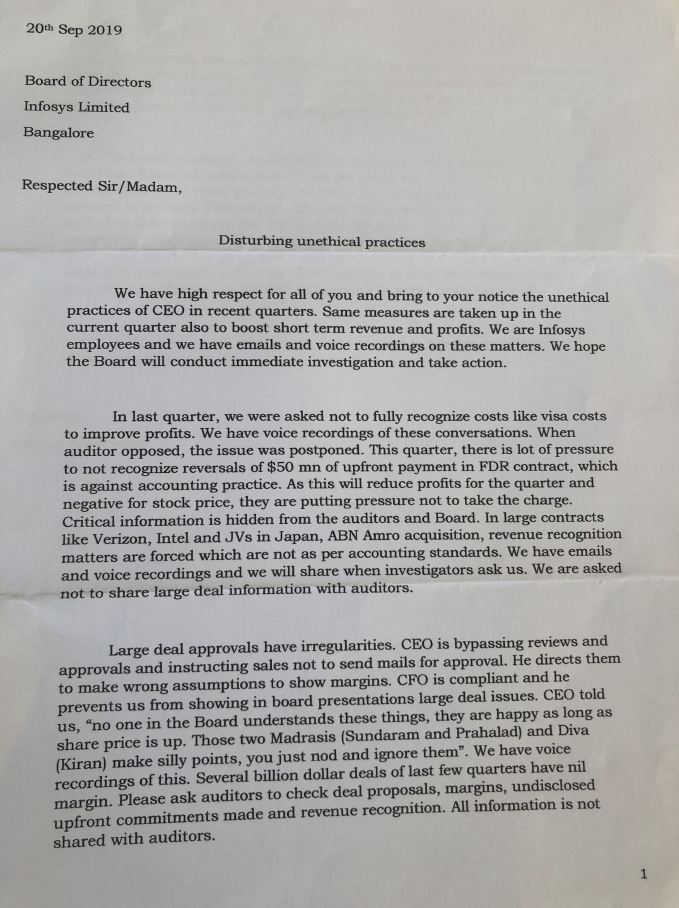 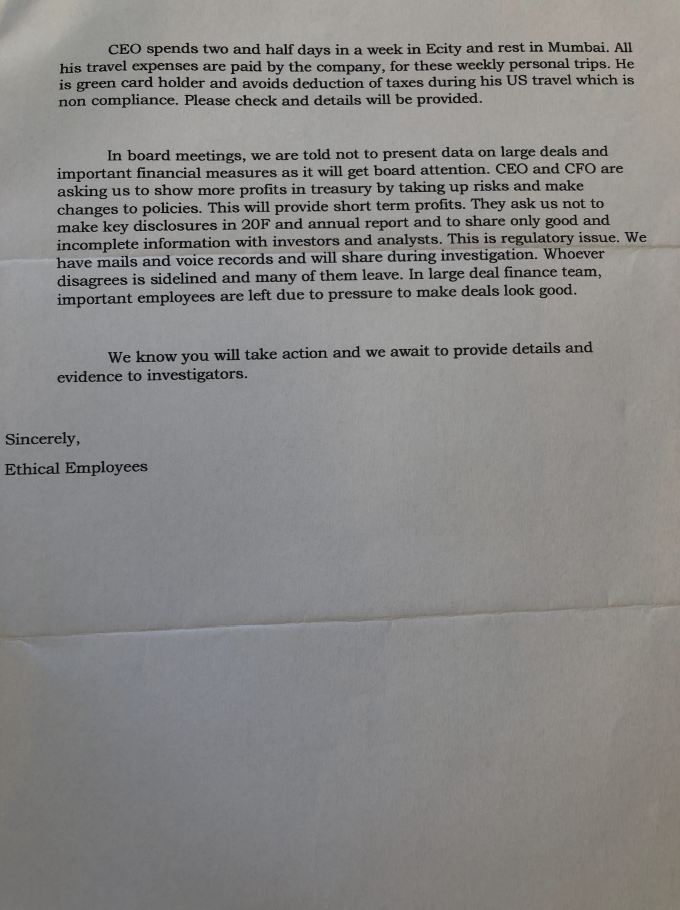 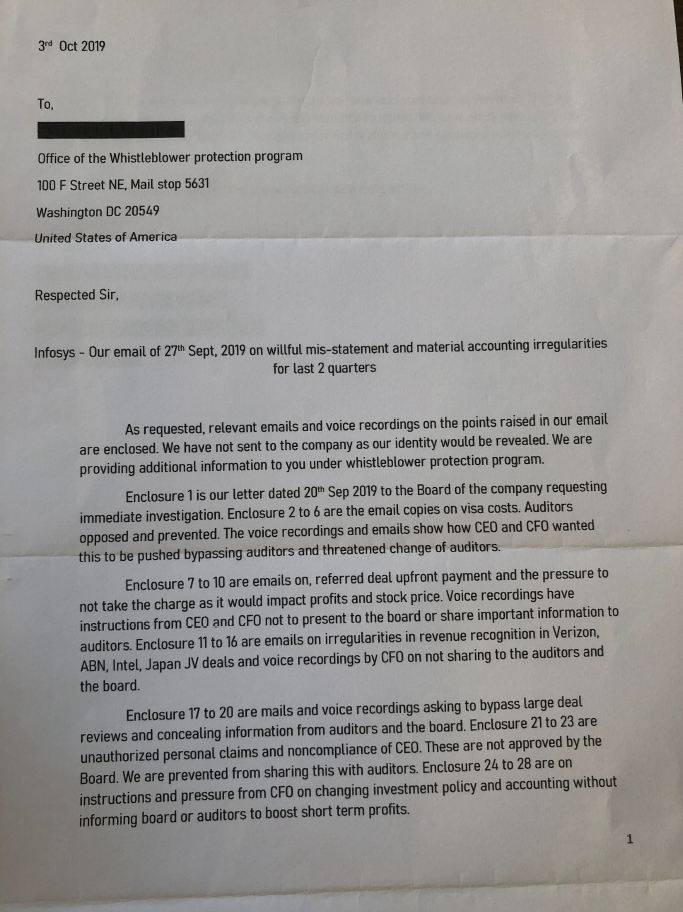 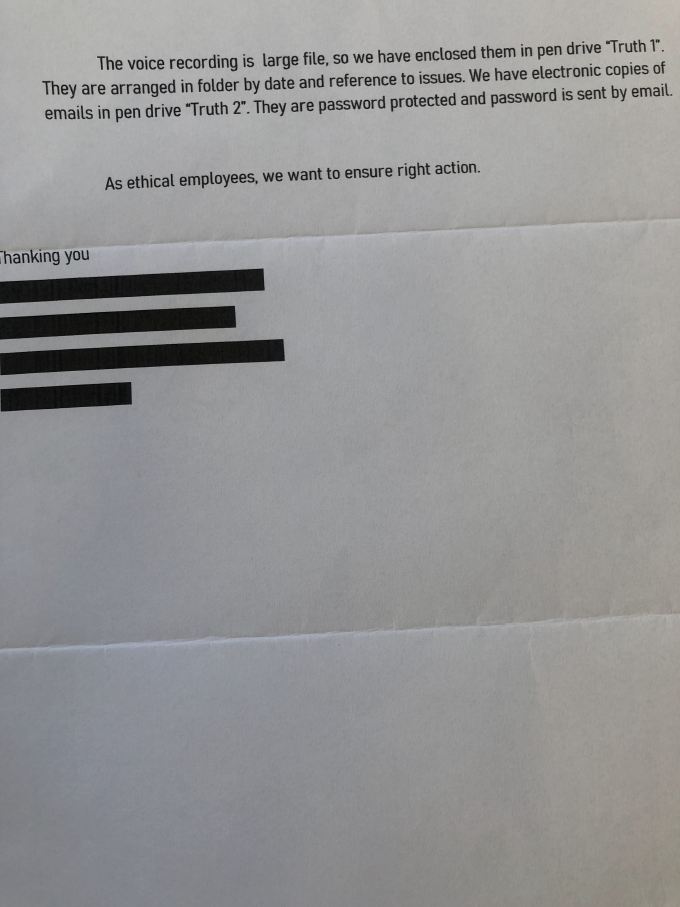 A copy of the letters that the 'ethical employees' group has sent.

“The whistleblower complaint has been placed before the Audit Committee as per the Company’s practice and will be dealt with in accordance with the company’s whistleblowers policy,” Infosys said in an emailed statement to Forbes India. “This is a huge negative for the company, and bad news especially because the company is so widely held,” said Harit Shah, analyst for information technology at brokerage Reliance Securities. “And this has happened to one of the poster boys of corporate governance.” With markets in Mumbai closed today, Shah expects the stock to fall tomorrow. “It’s anybody’s guess as to how much … the market can be pretty unforgiving in matters like this.” While an investigation will have to follow, in the longer run that the company’s valuation could also take a hit—meaning be re-rated by analysts at brokerages—isn’t something that Shah rules out. The whistleblowers alleged that CFO Nilanjan Roy was complicit in the matter and had prevented disclosures of potential problems with various large contracts. In a second letter, dated October 3, sent to the US markets regulator’s Office of the Whistleblower the alleged employees refer to having sent pen drives with voice recordings previously. Infosys reported signing a record $2.85 billion in total contract value (TCV)—meaning the value of a contract over its life—in its fiscal second quarter that ended September 30. This was a 75 percent increase over the large contract TCV signed in the same period in the previous fiscal year, Parekh and his top deputies told investors on October 11 after the company reported its second quarter results. The September quarter was also the fourth consecutive quarter in which Infosys reported double-digit revenue growth in constant currency. The whistleblowers allege that the contracts that regulators should investigate involve large companies such as Verizon, Intel and ABN AMRO, as well as joint ventures in Japan, according to the letter.

The whistleblowers’ letter, a copy of which is with Forbes India, also alleges that Parekh told the group, “No one in the Board understands these things, they are happy as long as share price is up. Those two Madrasis [DN Prahlad and D Sundaram] and Diva [Kiran Mazumdar-Shaw] make silly points, you just nod and ignore them.” This is the second time in recent memory that Infosys has been involved in whistleblower complaints that have become public. A previous one involved the severance pay of former CFO Rajiv Bansal, which became the crux of a rift between Infosys founder NR Narayana Murthy and the then-CEO Vishal Sikka in 2017. That fight precipitated Sikka’s resignation the same year, and the eventual naming of Parekh as the new CEO.

Tweets by @forbes_india
How to get the most out of your digital wallet
Sugar industry: A cooperative time bomb