The pro-union vote is significant for the technology industry, where workers have become increasingly activist in recent years over issues as varied as sexual harassment and climate change

By Kate Conger and Noam Scheiber 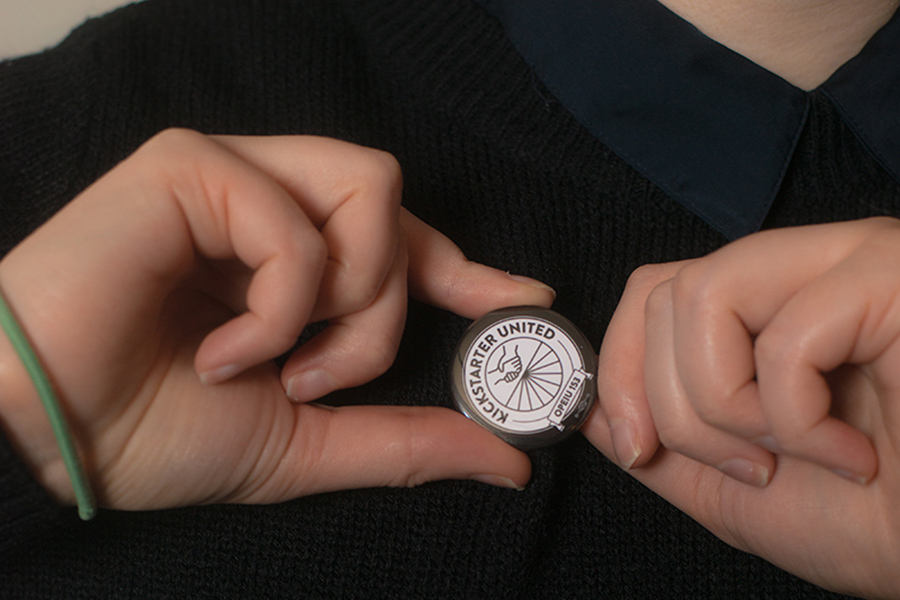 Former Kickstarter employee Clarissa Redwine, who was among a group of former and current Kickstarter employees fighting for unionization within the company, in Brooklyn, on Oct. 4, 2019. Employees at the crowdfunding platform voted on Tuesday, Feb. 18, 2020, to unionize, the first well-known technology company to take the step toward being represented by organized labor
Image: Andrew Seng/The New York Times

SAN FRANCISCO — Employees at crowdfunding platform Kickstarter voted Tuesday to unionize, the first well-known technology company to take the step toward being represented by organized labor.
The decision, which was formalized by a vote count at the National Labor Relations Board, came down to a narrow margin, with 46 employees voting in favor of the move and 37 opposing it. The debate over a union — and whether such representation was appropriate for highly paid tech workers — had been a source of tension at the company for many months. “I’m overjoyed by this result,” said Dannel Jurado, a Kickstarter senior software engineer who voted for a union. “There’s a long road ahead of us, but it’s a first step to the sustainable future in tech that I and so many others want to see.” The pro-union vote is significant for the technology industry, where workers have become increasingly activist in recent years over issues as varied as sexual harassment and climate change. Behemoth companies such as Google and Amazon have struggled to get a handle on their employees, who have staged walkouts and demanded that their companies not work with government entities and others. But large-scale unionization efforts have faltered. Only a group of contractors at a Google office in Pittsburgh unionized last year, and a small group of Instacart workers managed to do so this month. In the past, most unionization drives have been associated with blue-collar workers and lower-paid white-collar workers rather than white-collar tech workers, who are often paid upward of $150,000 a year. Veena Dubal, an associate professor of employment law at the University of California, Hastings College of Law, called the Kickstarter vote “a hugely important step” that “signals to workers across the tech industry that it is both desirable and possible to build collective structures to influence wages, working conditions and even business decisions.” Kickstarter’s chief executive, Aziz Hasan, said in an interview that what he was now “engaged in and thinking about is the ability for us to move forward.” Kickstarter’s employees will be affiliated with the Office and Professional Employees International Union and begin negotiating a contract with management over equal pay and inclusive hiring practices. The bargaining committee will include employees who opposed the union as well as those who supported it. “The tech sector represents a new frontier for union organizing,” Richard Lanigan, the union’s president, said in a statement. Kickstarter, which was founded in 2009 and has raised less than $15 million in venture capital, gives people a way to raise money for their creative projects — such as a film or a new gadget — from the public instead of through traditional investors, a model known as crowdfunding. The privately held company, which is based in Brooklyn, New York, and has 145 employees, has long positioned itself as altruistic. In 2015, it reincorporated as a public benefit corporation, meaning it also focused on providing a benefit to society rather than merely on generating profits for shareholders. Its employees’ unionization drive began in earnest last year, after Kickstarter found itself embroiled in a debate over whether to cancel a fundraising effort on its site for a comic book that included images of people punching Nazis. Workers pushed the company to allow the project to continue, which it did. The episode sparked discussions among employees about formalizing their voice in the workplace. The incident “was one moment in a line of events that prompted Kickstarter employees to organize,” Clarissa Redwine, a former organizer at the company, said in an email Tuesday. “We wanted power in product decisions, certainty in the terms of our employment, and power to question management when needed.” Last March, employees announced they were trying to organize a union. Some colleagues dissented, arguing that organizers had not been transparent about their efforts and questioning whether white-collar tech workers could benefit from a union. They said they were already highly paid and received more benefits than the average worker. One employee, who opposed the union effort and who asked not to be named because some dissenters had been harassed online, said that Kickstarter pays well and that some employees worried a contract might hamper them from engaging freely with leadership. It was also unclear whether a union would give employees sway over business decisions since traditional union contracts cover wages and hours, not corporate strategy. In September, Kickstarter fired two of the organizers behind the union attempt, including Redwine. The organizers said the company was retaliating and filed claims with the National Labor Relations Board. Their cases have not been resolved. Kickstarter said the two employees had been let go for performance issues unrelated to their organizing. The firings drew attention and support to the organizing effort, including from author Neil Gaiman and actor David Cross. “I’m very unlikely to post support or links on Twitter for Kickstarter projects in the future. Even if I very much want them to succeed,” Gaiman tweeted in September. Kickstarter held forums in November so workers could voice their opinions about unionization. Hasan asked managers and executives not to attend and to stay out of the company’s headquarters so employees could frankly discuss the situation. In January, employees began casting their ballots for and against a union. Eighty-eight of Kickstarter’s 145 employees were considered eligible to vote because they were not in managerial roles; five did not cast ballots. “I’m so proud, it was all worth it,” Redwine said in her email Tuesday. “I feel so lucky to have been a part of this tipping point.” Hasan said he was eager to begin speaking to the staff about its concerns. “We have a moment now were we can actually sit down and listen to what’s going on and I can engage the staff for the first time,” he said.