The NBA superstar has come to New York with three goals in mind: A return to dominance, a defining championship and a lasting business empire. They're all interconnected 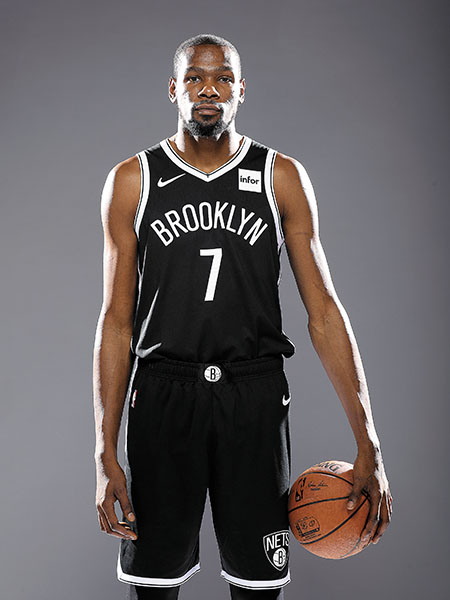 The sleek and infinitely long apartment overlooking Manhattan’s sleek and infinitely long High Line park perfectly, if unintentionally, frames the owner of this mansion in the sky, the NBA superstar Kevin Durant, who is so trim he looks even taller than 6 feet 10. Settling into his (yes, infinite) blue velvet couch, Durant can toggle between the stunning skyline and his trophy-stacked office, filled with a museum’s worth of MVP, All-Star and other superlative hardware. (His two NBA championship rings, won with the Golden State Warriors, have a special home in the bedroom.)

But Durant’s focus is on present challenges, rather than past triumphs. Across from his trophy room sit a Pilates machine and a cagelike strength and balance trainer called a Sensopro, here to assist a career-saving comeback as he rehabs the Achilles tendon he ruptured during June’s NBA Finals in front of a television audience of 18 million. That season was done—the current one too. “What’s most important is to take care of my body so I can put my product back on the court,” Durant says, fresh from a workout wearing a printed hoodie featuring the antihero from the film A Clockwork Orange and black-and-orange Jordan high-tops. “How well you play on the court determines how big your business is going to grow.” That business starts with a $164 million contract he signed with the Brooklyn Nets this summer and a 10-year, $275 million Nike shoe deal that assumes his continued superstardom. With those two alone, he will earn more than $70 million this season without suiting up for a single game. Durant’s goal is to turn that income into assets at a scale few athletes not named Jordan or LeBron have attempted. Brooklyn is Durant’s fourth career stop. He was originally drafted by the Seattle SuperSonics, which soon moved the franchise to Oklahoma City, where he became a superstar playing for the Thunder. In the Bay Area, when he decamped to the Golden State Warriors, he became a champion, a lightning rod—many fans cynically viewed him as jumping onto the Stephen Curry juggernaut that was already minting titles—and an entrepreneur. 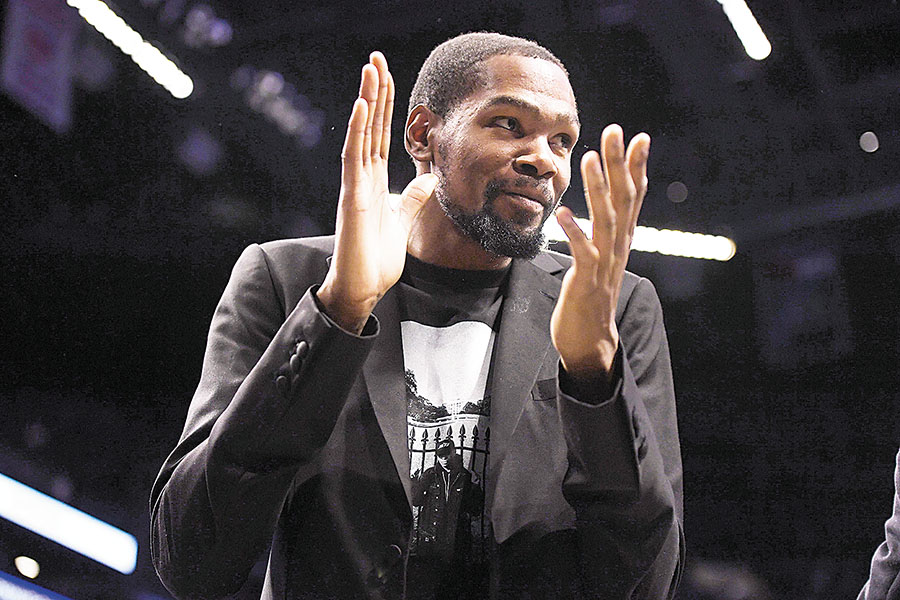 In the bay area, Durant made tech investments. In New York it's about owning his own media.
Image: Matteo Marchi / Getty Images

In choosing Brooklyn, he seeks to redefine all three aspects. Can the superstar come back from a devastating public injury to dominate the league again? Can he win a championship with a team centered on him? (He’s already flexed new muscles there, eschewing the high-profile New York Knicks, a pairing seemingly preordained, for the upstart Nets.) And can he translate his Silicon Valley lessons to the world capital of capital as well as ­of media and fashion. “Walking around New York,” Durant says, “there is so much greatness, hard work and determination.” Durant’s outside business vehicle: Thirty Five Ventures, co-founded with his manager, Rich Kleiman, a music industry veteran who previously helped start the sports division of Jay-Z’s talent agency, Roc Nation. Thirty Five Ventures has 15 full-time employees running Durant’s endorsements, foundation, and expanding collection of startups and media plays. Over the past few years he’s plowed more than $15 million into 40-plus startups. Nearly 70 percent of the companies have raised subsequent rounds at higher valuations, scoring what Durant claims are paper gains topping 400 percent. More directly, Thirty Five Ventures has a production arm creating basketball-themed documentaries, series and scripted shows for outlets like Apple, YouTube and ESPN. “LeBron James was the first case study that you can build a real business while you’re playing,” says Kleiman. “Kevin is building a real and authentic company.” 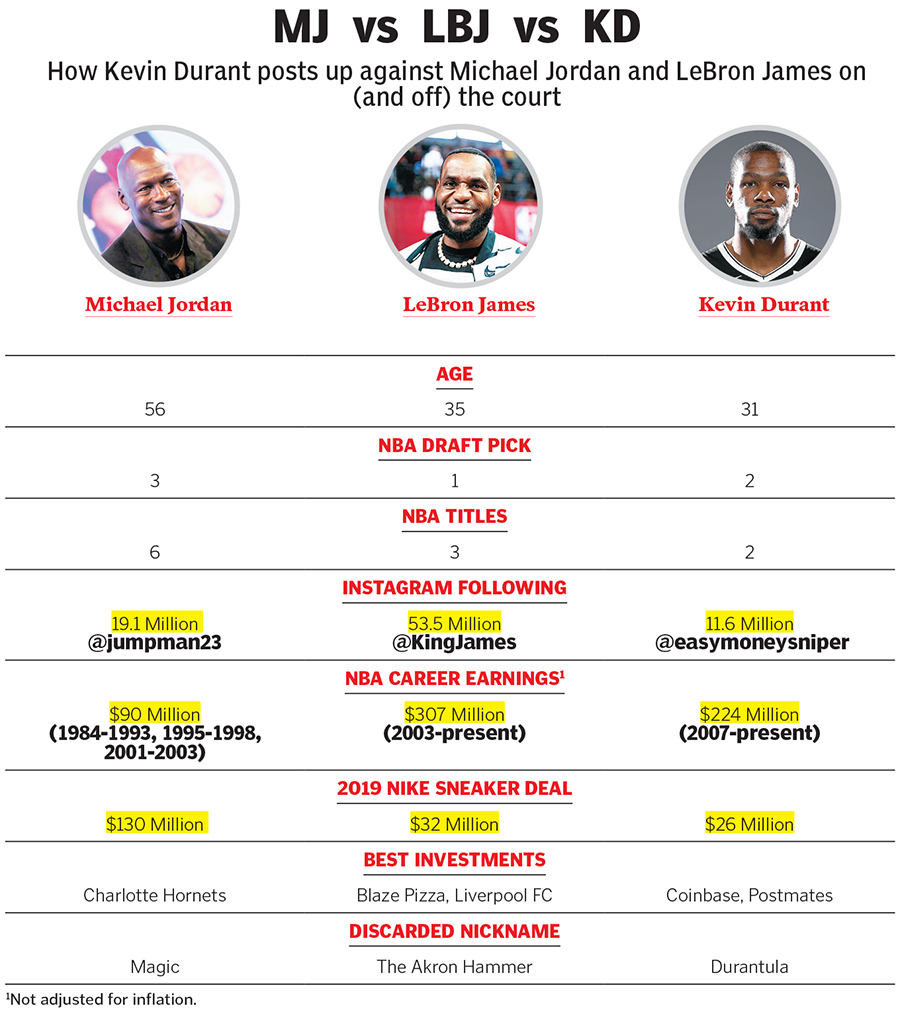 For Durant, a 30 Under 30 alum who recently hit the grand old age of 31, the goal is nothing short of a 10-digit net worth. By the time his playing career is over, he’ll have made well over $500 million from salary and sponsorships. Now, Durant says, “I want to use the checks I get from companies to create true generational wealth.” Durant was raised by his mother in Prince George’s County, Maryland, outside Washington, D.C., in a rough neighbourhood where he was always looking over his shoulder. By middle school, he was 6 feet and mostly looking down. By 17, he was the MVP of McDonald’s High School All-American Game. By 18, College Player of the Year at the University of Texas. By 19, NBA Rookie of the Year. And so on, all the way to league MVP recognition and several runs at the crown with the Thunder and then his 2016 decision to join the team he couldn’t beat—signing a $54 million contract with the Warriors. The move would forever alter his brand and his business. Durant first took an interest in the money game when he was weighing competing endorsement offers from Nike and Under Armour in 2014: “I learned a lot about the business side through that. It really broke things down for me.” Oklahoma City offered slim options. “There’s oil and real estate,” Durant says, “but that was a real old boys’ club, and it was hard to break into.” With one foot still in the oil patch, Durant and Kleiman waded into the tech world, lobbying to invest in the delivery startup Postmates and the robo-investor Acorns. In the Bay Area as a Golden State Warrior, though, he had VIP access to the world’s hottest startups. “All the founders and investors come [to Warriors games], and you get to interact with and meet them,” Durant says. “They look like normal people, but they are changing the world so fast and have so much power.” Durant soon struck up friendships with the likes of Laurene Powell Jobs, Marc Andreessen and Ben Horowitz, Airbnb’s Brian Chesky and Joe Gebbia, and executives from Google and Apple. In the Silicon Valley startup scene, at once square and status-obsessed, Durant money was sexy, attracting press, street cred and customers. Soon came investments in Coinbase, Robinhood, Caffeine TV, Imperfect Food, Lime scooters and more. “He learned about what it takes to start companies and invest in companies,” says Eddy Cue, the head of Apple’s vast internet software and services division, who first met Durant for dinner and ended up talking with him until 3 am. “When you’re winning, everyone’s interested in learning what makes you tick, and Kevin was smart to take full advantage of meeting people.”

Tweets by @forbes_india
'Entrepreneurship is a State of Mind': Sunil Shukla
Kickstarter employees vote to unionise in a big step for tech