Only the Relevant Survive 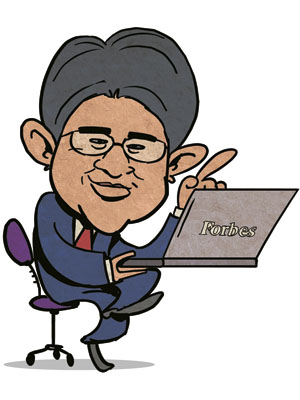 Pack Up! The call the entire crew was waiting for came at about 2 a.m. on a sultry August night in Delhi. The crew, my colleague Vivian Fernandes, and I had been on location for almost two hours and we were tired. The only man completely unruffled was our guest, a senior member of the Cabinet, who didn’t seem to mind that the entire exercise in enervating heat would only give him two minutes on air. As we thanked him again for agreeing to meet us past midnight, he said, “Arrey, I thought if you boys were willing to work so hard, why couldn’t I?”

No I wasn’t shooting for The Forbes India Show. A foreign media brand coming out of India, the thought was so absurd, it hadn’t even occurred to us then. In fact, CNBC TV18 wasn’t even a dream then. The only things common to that shoot and those I do now are some of the members of the crew, who are still with us some 15 years later.
It was certainly a more innocent time for television news. There was just one privately produced daily news show on Indian television — the show we were shooting that interview for, Business AM on Doordarshan. Doordarshan, remember, was almost all of Indian television then. It wasn’t difficult to get senior cabinet ministers and captains of industry to sit in for “exclusives” at very short notice. It helped, of course, that ours was often the only television camera at a press conference!
Fifteen years on, I must scramble for that “exclusive”. What we invariably get, as India’s leading business news brand, are “time” exclusives: We get our interviews before the others! “JP Morgan’s Jamie Dimon will give you the first interview.” Frankly — and I shouldn’t be saying it aloud — I would have done that interview whenever I got it. He was engaging, and for a man who had just played a big part in “saving” the global financial system as we still know it, he is disarmingly modest. It is the modesty that comes with overwhelming confidence. A trait that is, not surprisingly, common to most guests on the show.
And every one of the people whom I met in the first six months that I did the show needed that confidence. It was then still all about green shoots, and the worries were, overwhelmingly, whether the roots that sent out these shoots would hold or wither away.
Today, everybody breathes easier; the roots are reasonably deep. Everyone I meet talks of the lessons learnt and tells me how their companies or countries are responding. Each story is different, but the lesson was best summed up for me by Singapore’s Prime Minister, Lee Hsien Loong: “We need to be relevant.” He was referring to his country, but when I rewind to listen to what Adi Godrej, Chanda Kochhar, Harsh Mariwala, S. Ramadorai, B. Muthuraman, Gautam Thapar, Narayana Murthy or Wilfried Aulbur had to share, I realise that it’s a lesson everyone has learnt for their companies: “Only the relevant survive.”