Ride-sharing piles up traffic at airports

It is not your imagination: Traffic at the airports — even before you get inside — has gotten worse. The cause is not just the record number of travelers. It's also the shift to ride sharing 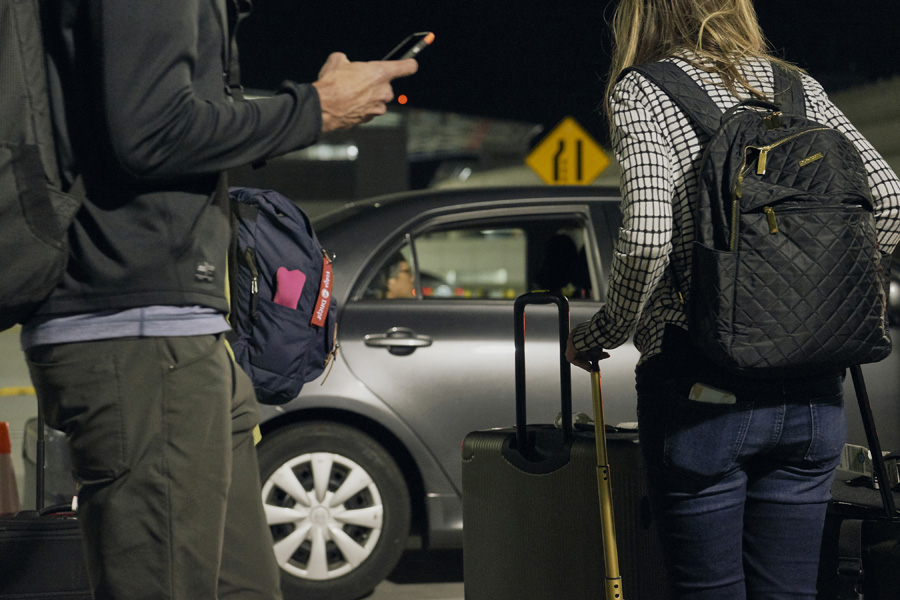 Travelers wait for ride-sharing cars at a designated pickup area at San Francisco International Airport, Aug. 8, 2019. The airport was one of the first to license ride-sharing companies and the traffic volumes quickly became “untenable,” an airport spokesman said. (Aileen Son/The New York Times)

Been at an airport lately? Then you’ve surely been in a backup on the roadways or had to jockey for a place in front of the terminal to pick up or drop off a traveler.

It is not your imagination: Traffic at the airports — even before you get inside — has gotten worse. The cause is not just the record number of travelers. It’s also the shift to ride sharing.

One frequent business traveler says her own experience bears this out.

“Airports were planned for taxi lines, not this other large vehicle transportation mode,” said Tanvi Gandham, a management consultant.

To address the crowding, airports are starting to make changes, adding express lanes for travelers without checked bags, separate areas for ride-share companies and larger off-site lots for waiting. At the same time, ride-share companies like Lyft and Uber are adding new capabilities to their apps, matching, for example, drivers who have just dropped off passengers with people waiting to be picked up, cutting down the time vehicles are circulating and waiting.

The explosion in ride-share demand has caught airports off-guard, “and operations staff are scrambling to address it,” said Kama Simonds, spokeswoman for the Portland International Airport in Oregon. Ride-share pickups there, she said, have climbed to 106,000 from 48,000 in the last two years.

The congestion problem starts with this: More people flying than ever. According to the International Air Transport Association, the airline industry’s trade group, the total number of airline passengers in North America will top 1 billion this year, an increase of about 19% from 2014. To accommodate the additional travelers, airports have been building new gates and terminals, and that construction is causing even more traffic problems.

In 2014, San Francisco International Airport became one of the first airports to license ride-sharing companies, and within a few years, the traffic volumes “were untenable,” Doug Yakel, the airport’s spokesman, said. “Our goal is for the average speed through the area to be 15 mph,” he said. “We regularly had stop-and-go traffic, and gridlock.”

The airport, which served almost 58 million travelers in 2018, compared with 47 million five years ago, is in a developed area without room to expand. With a freeway on one side and a bay on the other, the airport can’t increase its footprint, Yakel said.

Airport models showed that to achieve that goal of 15 mph, the airport needed to remove 45% of ride-sharing cars from its roadways, Yakel said. A variety of ideas, including financial incentives for passengers to be dropped off in the main parking garage, didn’t yield the hoped-for traffic reductions. So the airport recently moved almost all ride-share passenger pickups to the top floor of that garage. The black car services and specially equipped vehicles for disabled people can still go to the terminal curbs.

Gandham, a frequent ride-share user, travels from San Francisco airport almost every week and has been to 11 cities in the United States this year. She said the change at San Francisco’s airport has made catching a ride more efficient, though it does involve a longer walk from the gate. That ride-share area is better, she said, than many other airports’, which seem to repurpose “makeshift spaces that weren’t designed for pick up and drop off.” Sometimes, she said, “they’re just a couple of cordoned-off rows in a parking lot.”

Marcus Womack, head of global airport products at Uber, said the company had been working more closely with airports over the past two years to improve the experience for riders and drivers. “Neither one wants to spend time waiting,” he said.

Both Uber and Lyft offer a feature called rematch, which allows drivers who have dropped off passengers to pick up another fare without leaving the airport and waiting in the off-site staging lot. Lyft is using the feature at more than 100 airports. At Seattle-Tacoma International Airport last month, 56% of Lyft drivers dropping off customers were connected to a new one, according to the company.

Along with improving driver efficiency, rematching “reduces the number of cars on the road and lowers carbon emissions,” Womack said.

In the case of the San Francisco airport, though, the location of the new pickup area precludes the use of the rematch feature.

Ride-share companies are also rolling out a system where passengers who request a ride receive a code that they can give to any car in the Lyft or Uber line rather than searching for a specific driver. It mimics the traditional taxi line, but payment comes though the app. Uber introduced the system about two years ago for large events, like concerts. “Getting in line is much easier than figuring out which of the Toyota Priuses driving by is the one you are supposed to take,” Gandham said.

Both Lyft and Uber introduced the feature this summer at LaGuardia Airport in New York City.

With air travel and ride-sharing increasing around the world, travelers in other countries may be facing the same problems. Airport congestion “varies greatly and is typically more challenging in major hubs across the world,” Womack said. Uber works with airports in 63 countries; Lyft operates in the United States and Canada.

Rick Cotton, executive director of the Port Authority of New York and New Jersey, said that the authority is “in the midst of a $30 billion investment program to completely transform” the three airports in the New York City metro area. “A key part,” he said, “includes new infrastructure upgrades to handle these app-based services.” In the meantime, the airports have taken several steps, including creating new ride-share pickup areas and putting additional staff members at congestion points to direct traffic.