With four hours of original programming, the new channel aims to bring in missing genres and increase ad inventory 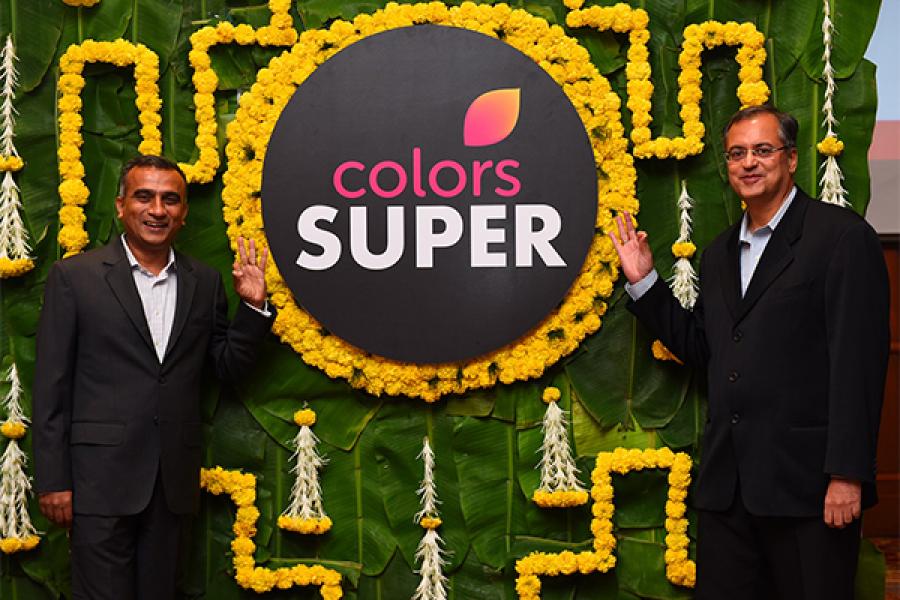 Sudhanshu Vats and Ravish Kumar at the launch of Colors Super

Buoyed by the strong growth it has seen in the regional market, Viacom18 has announced the launch of a new Kannada channel, Colors Super, at a press meet in Mumbai on 7th July. This would be their second channel in the region, the first being Colors Kannada.

“Driving regional aggressively is a key strategic thrust that we have. Karnataka is a market which in our assessment is one of our strongest markets. Colors Kannada has been enjoying the number one slot for the past 62 weeks among Kannada general entertainment channels (GEC),” says Sudhanshu Vats, Group CEO, Viacom18. However, he adds, “we are still not being able to satiate the viewers’ appetite on different genres as we would have liked to. There are more stories to tell…more movie premieres.” And that prompted the launch of COLORS Super.

The new channel, which will start airing on 24th July, will have four hours of original programming per day and will air films on weekends. The shows will be across genres like rom-coms, mythology, supernatural, reality, and fantasy amongst others.

Ravish Kumar, Project Head, regional channels (Colors Super, Colors Kannada and Colors Bangla) says that GEC’s constitute 68 percent of the total Kannada viewership and Colors Kannada enjoys 36 percent of that demographic. Explaining their dominance, Kumar says that the four top-rated shows in Kannada, Agnisakshi, Puttagowri Maduve, Lakshmi Baramma, and Akka are all on Colors Kannada.  They have also brought international formats to the market, like Bigg Boss (Big Brother) and Dancing Star (Dancing with the Stars). “We’ve adapted them for the Karnataka market and brought them to a scale and grandeur that viewers had not seen,” he adds. For Colors Super, he envisions a similar growth trajectory, backed by their ideas and viewers demand.

The demand for content is complemented by the demand for advertising. According to Vats, within the regional entertainment pie, Kannada GEC ad market stood at around Rs 500 crore in FY16. And the regional ad market is growing at a compound annual growth rate of around 15 percent, similar to overall TV ad market. “COLORS Super will expand our offering to both the viewer, by bringing in missing genres into the market, and the advertiser, by increasing ad inventory, thereby plugging in existing gaps in the current market,” he says.

The network has planned a marketing blitz across 179 major towns of Karnataka, targeting both regional as well as urban areas in the state. The ad spots will play on the word ‘Super’, used colloquially in the state to express a great liking for something.

Apart from Zee Kannada, Suvarna and Udaya, COLORS Super will also compete with COLORS Kannada. Although Kumar intends COLORS Super to complement COLORS Kannada by using Super to offer “viewers an exciting mix of stories and genres that are currently absent but much in demand,” the network may end up cannibalizing its own channel. In that case, Kumar says that “we are scared but it’s a situation where we’re excited and we know our content is great which is what the game is all about. It’s just about giving the people who watch us a superb viewing experience.”

Disclaimer- Network18 is the publisher of Forbes India.