Vishy Anand - In Russia, Without Love

By retaining the World Championship in Moscow, the land of chess, Anand has not only fulfilled another dream, but also shown his class by continuing to win in places with little crowd support 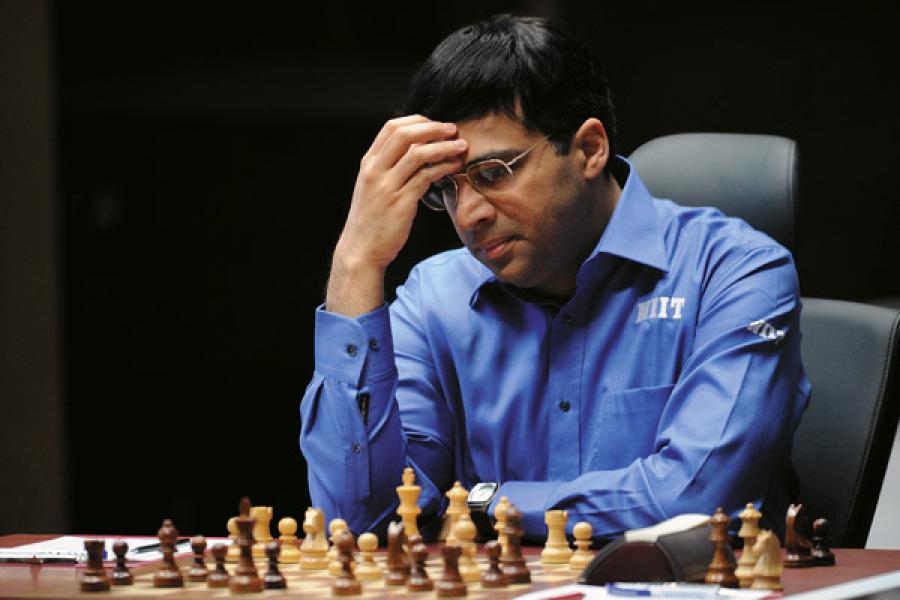 To win a World Chess Championship in Moscow is just about every chess player’s ultimate dream. Much like, or maybe even more than, Wimbledon in tennis or the British Open in golf.

So, when Viswanathan Anand added Moscow to the list of venues, where he has won the world title—Teheran (Iran), Mexico City (Mexico), Bonn (Germany), Sofia (Bulgaria) being the others—it was the culmination of another schoolboy chess player’s dream.

India may be its land of birth, but Russia is without doubt the Land of Chess. Their artists make chess paintings; there is chess furniture and they play chess in museums. Kids and adults, alike, carry foldable and magnetic chessboards in bags and like young boys swing a cricket bat on sidewalks in India, they play chess in the parks. In short, chess is in their blood.

For the Soviets then, and Russia now, chess still remains a tool to signify their supremacy. It was more before the break-up, but now Russia wants to be back as the dominant nation. If numbers and average ratings of the top-10 players were to be the yardstick, they are still there on the top.

And by a good margin, too. As per the last count by the FIDE, Russia alone has 214 grandmasters and the next best is Ukraine with 79. Germany (77), United States (77) and Hungary (51), whose roster of chess players includes a huge number of Russian émigrés, are the only other countries with over 50 grandmasters. India, for the record, has 26, the first of which in 1987 was Viswanathan Anand.

In terms of average rating of top-10 players, the only two countries without any Russian/Soviet émigrés are China (third) and India (eighth).

From 1948, when Mikhail Botvinnik first unseated Dutch doctor Max Euwe as the world champion, barring three years of Bobby Fischer, Russians or players from the former Soviet states, held the world title for the rest of the century! Even during the times of the split world titles, they held both.
Even in 2000-2012, the only others who have challenged that supremacy have been Viswanathan Anand (2000 to 2002 as FIDE champion and then 2007 to present as the undisputed World champion) and Bulgarian Veselin Topalov (2005-2006 as FIDE champion).

Little wonder then that Anand has been the proverbial thorn in the flesh for Russian chess.

Back in 1991, when the chess world saw its first-ever Category 18 tournament, involving the world’s best, including the then World Champion Garry Kasparov, the man coming out on top was Anand. And tied for second with Kasparov was Gelfand! Anatoly Karpov was only fourth. That tournament marked out Anand as the star of the future. And that is a promise he fulfilled in every sense.

Winning chess titles in places where there is little Indian presence and crowd support is great, but nothing new for Anand.

Teheran in 2000 and Mexico in 2007 were neutral countries where he won the title, and Bonn (Germany) for the match against Russian Vladimir Kramnik may seem neutral. But in truth, Kramnik for quite some time lived in Germany and his manager was German. Kramnik had after a win at Dortmund said, “I am happy that the event is taking place in Germany, as according to statistics I achieve my best results there. This is a fact. Moreover I feel great support from the German audience, people there have been expressing their affection towards me.”

Kramnik had won his match against Deep Fritz in Bonn and in 13 appearances between 1995 and 2008, he was either the sole winner or a joint winner at the Dortmund Sparkassen Chess Championships—making Germany virtually his home away from home.

The stories of Anand’s 2010 match against Veselin Topalov in Bulgaria are the kind chess players have nightmares about. Anand’s request for a postponement by three days was turned down and later made to one day despite the cancellation of all flights over European skies due to the ash emitted by an Icelandic volcano. Anand and his team of seconds and administrators, the same as it is in 2012, drove for 40 hours and through several countries to reach Sofia. They arrived a day before the game and an exhausted Anand lost the first. He hit back in two of the next three and finally won the match with black pieces in the 12th and final game. Dramatic.

Similar to 2008, the match against Israeli Boris Gelfand in Moscow might seem neutral territory. It was anything but that. The billionaire sponsor was Gelfand’s childhood friend—though he is a real art and chess lover—and was also a university colleague of Susan Polgar. Gelfand was born in Minsk, the Belarussian capital, which is independent since the dissolution of the Soviet Union, but has the makings of being a Union state with Russia since 2000.

Jewish Gelfand shifted to Israel in 1998, but his best friends are still Russian and the country is virtually his second home. So, it was near-home support and there was a huge contingent from Israel—including the Chairman of the Israel Chess Federation who was seen carrying an umbrella for Gelfand when it drizzled on the way from the hotel to the venue one day—cheering for him. The day he won the seventh game, there was jubilation which would have rivaled any home winner. Alas, it lasted less than 24 hours, before Gelfand lost the eighth game in 17 moves, the shortest in World Championships’ more than 100-year-long history.

There were accusations that Anand had ‘slid’ in his quality of chess. There were murmurs and then loud pronouncements from the likes of Kasparov that Anand lacked ‘motivation’. Those may be personal opinions, to which Anand himself said, they were entitled.

But an ‘unwillingness’ or ‘safety-first’ tactics signifies neither a slide in quality nor lack of motivation. In fact, it shows determination of greater degree.
In an era when computers analyse virtually any new line, an innovation or a novelty is that much rarer. In one of the interviews in Moscow, Anand said, “It is easier to come up with a new idea in the eighth decade of a century than the second of the next.” Touche!

Both Anand and Gelfand have been part of the chess elite since the early 1990s. When Anand won Reggio Emilia in 1991, Gelfand shared the second place with Kasparov. Sixteen years later when Anand won the world title in tournament format in Mexico, Gelfand was second. In between Anand’s success were more pronounced and Gelfand got lost among the larger images created by Kasparov and Karpov and then Kramnik. But the truth is, Gelfand’s chess was always solid—a fact that did not escape Anand.

Gelfand’s emergence on top from the heap that was there in the Candidates cycle of 2011, only strengthened Anand’s belief of Gelfand’s ability. Hence the circumspection.

Anand at the end of the tournament observed, “… the problem in such a tight match is every mistake has a much higher value than in a match where there are mistakes flowing back and forth in every game.”

And both Anand and Gelfand understood each other’s strengths well. Hence, they took few risks and with the match being just 12 games, they knew falling back could be suicidal. Indeed, it seemed so after Anand lost the seventh. “I cannot remember such a black day like after game 7, I couldn’t sleep. That day I really thought I’d blown the match,” recalled Anand.

That he won the next game, courtesy a blunder by Gelfand, was great fortune. And he held on to it and won in the ensuing tie-breaker, where Gelfand constantly struggled with the clock.

Anand played his first Candidates match in India—against Alexei Dreev in 1991—and then won the first part of his first World title in India. The final match with Alexei Shirov was held in Teheran in 2000. It would indeed be quite appropriate if he got to defend his world title in Chennai in 2014. It would be homecoming in the truest sense.

Tweets by @forbesindia
Facebook - Too Much Hype, Too Little Substance?
Pay Per Use - Making Sustainable Profits