After years of viewing social media as an anti-social force, the crisis is revealing something surprising: Twitter, Facebook, YouTube and others can actually deliver on their old promise to democratize information and organize communities 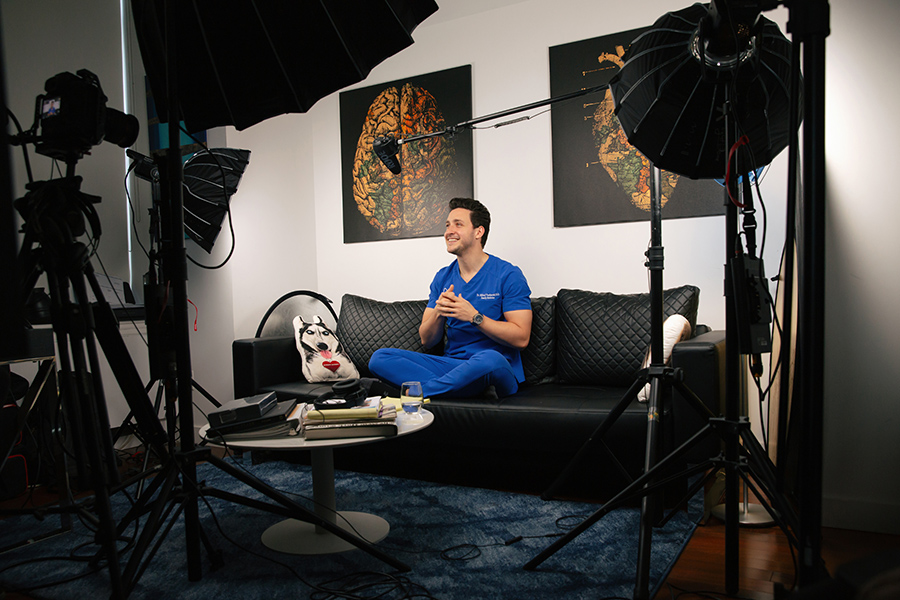 Mikhail Varshavski, “Dr. Mike” on YouTube, one of the site’s trusted sources on the coronavirus, films a YouTube video at his home in New York, March 13, 2020. Social media companies are delivering reliable information in the coronavirus crisis — why can’t they do that all the time? (Michael George/The New York Times)

For some Americans, reality arrived Jan. 25, when a Harvard epidemiologist tweeted “HOLY MOTHER OF GOD.” Or on Feb. 29, when researchers announced they had found cases in Seattle.

“The war has literally exploded and battles are uninterrupted day and night,” Dr. Daniele Macchini wrote. “We need to spread the word to prevent what is happening here from happening all over Italy.”

All through February and early March, the voices of doctors and nurses on social media provided a vital antidote to those of confused and complacent political leaders embodied by President Donald Trump. Their voices carried credibility and urgency in a way the always-on crisis of cable news can’t. They fed and were fed by credible journalism. And they helped force the United States to reckon with the crisis.

After four years in which social media has been viewed as an anti-social force, the crisis is revealing something surprising, and a bit retro: Twitter, Facebook, YouTube and others can actually deliver on their old promise to democratize information and organize communities, and on their newer promise to drain the toxic information swamp.

The question, which I put to Mark Zuckerberg, chief executive of Facebook, in an interview Thursday, is why it took a global health crisis for them to do so.

Zuckerberg said the difference between good and bad information is clearer in a medical crisis than in the world of, say, politics.

“When you’re dealing with a pandemic, a lot of the stuff we’re seeing just crossed the threshold,” Zuckerberg said. “So it’s easier to set policies that are a little more black and white and take a much harder line.”

Social media still contains worrying falsehoods, including the dangerous myth that black people are immune to the coronavirus. You can find terrible ideas on TikTok, along with good advice from a dancing doctor. The jury is out on Instagram’s bra masks. And the spread of misinformation in languages other than English is also reportedly worse.

But the coronavirus outbreak has been the best moment for the platforms since it became clear in 2016 that frauds and trolls were running rampant. After a wave of public pressure, tech companies began taking those problems seriously, setting policies and algorithmic tools to mute toxic speech. Facebook and YouTube hired thousands of moderators. Journalists sought to hold them to their own standards.

Directives from the World Health Organization have provided the companies with the kind of clarity engineers appreciate. The services are promoting the good and deleting the bad, sending users straight to the Centers for Disease Control and Prevention and the WHO. Even frequent critics of the big social platforms are pretty impressed.

”In English, it’s been really successful,” Data and Society’s Danah Boyd said of the anti-misinformation efforts. “Everyone’s ignoring the tweeter-in-chief and just going.’’

Analytics company NewsWhip produces regular lists of most-shared articles that often reflect the low quality of widely shared material. But the crisis’ list of most-shared stories has been dominated by hard news, solid medical advice and stirring moments of quarantined Italians singing together, along with the pandemic’s special brand of humor: A top article in the United States last week was “Spock’s Vulcan salute should replace handshakes in coronavirus era.”

Many of the most alarmist claims about misinformation are themselves misleading. A study by NewsGuard, which sorts websites by credibility, claimed that sites publishing coronavirus misinformation had received “more than 142 times the engagement” of the WHO and CDC sites. The problem: Most of those engagements were for posts that had nothing to do with coronavirus. That didn’t stop the BBC from inflating the report. Another study, from the Foreign Policy Research Institute, a Philadelphia think tank, asked, absurdly, “What should we worry more about? Coronavirus or coronavirus disinformation?” (Its author, Clint Watts, told me in an interview that he actually thinks the platforms have been moving unusually fast to delete misinformation.)

The pandemic has revealed the battle lines in the new information wars. When the disease emerged, the Chinese government suppressed information and then turned the social media platforms into tools for both reliable information and propaganda.

In the United States, the battle began on Twitter, where Trump controls only his own account. And instead of seeing Chinese-style propaganda, many users suddenly found themselves reading urgent, sophisticated observations from public health experts.

“The people who are part of professional communities across epidemiology and other kinds of public health — normally they’re talking to each other, but right now they’re talking to us all,” said Joanna Geary, the senior director of curation at Twitter. Her team aims to gather compelling and informative tweets about the virus and display them at the top of every user’s feed. Those posts then get more engagement, which signals to Twitter’s algorithm that more people should see them.

“Public conversation can help the world learn faster, solve problems better and realize we’re all in this together,” said Jack Dorsey, the company’s chief executive, in a direct message last week. “Facing a devastating global pandemic really brings that, and Twitter’s role, to light.”

Pinterest has also taken a clear stance in shaping searches about coronavirus. Snapchat, which largely avoided the misinformation trap, is driving users toward good health advice.

Executives at Facebook and YouTube, which house vaster seas of content, said the companies’ investments since the scandals of the 2016 presidential campaign have been paying off. YouTube’s reaction is the “culmination of many years of hard work around problems that we wanted to make sure are addressed,” said Neal Mohan, chief product officer at YouTube. CDC links are displayed below any video on coronavirus and have been seen 800 million times during the epidemic, Mohan said. And users who search for coronavirus or who watch videos on the topic are directed to trusted sources — which include news media as well as YouTube figures who were made for this moment.

I met one of those YouTubers recently after I suggested at the dinner table that my family buy N95 masks. My 10-year-old son responded righteously that nurses and doctors actually need them more than we do. Dr. Mike, he told us, says we should be “alert, not anxious.”

Dr. Mike, whose real name is Mikhail Varshavski, is a family practitioner in New Jersey who became popular five years ago as a hot Instagram doctor with a cute dog. Then, he was 25 and living with his father on Staten Island. Now, he inhabits a $9,000-a-month penthouse on Manhattan’s Far West Side.

“Pandemic does not mean panic-demic,” he said Friday afternoon. He was seated cross-legged on a black leather sofa., trying out lines. “Do you like that? Or is that corny?” He decided it was good and corny.

Varshavski delivers solid health information to young people, much of it through videos of him reacting to memes and TV shows. When the coronavirus crisis began, he responded. And because YouTube's system now favors authoritative voices, videos like his “The Truth About the Coronavirus” rank high in recommendations. It has drawn more than 5 million views.

Varshavski also debunks misinformation from many directions. One of his targets Friday was an influencer who talks to deer. Another is the TV star Dr. Mehmet Oz, who has been recommending zinc tablets and elderberry syrup. (A spokesman for Oz said the products have been shown to be helpful with the common cold.) Then, of course, there’s Trump.

Responsible voices like Varshavski’s and a whole generation of researchers, reporters, and even tech company employees seem, at least right now, to be breaking through. Zuckerberg, the industry’s most committed optimist, says the power of social media will be viewed “as a bigger part of the story if we do our job well over the coming weeks.”

When I talked to Zuckerberg and other social media executives last week, I kept returning to the same point: Will the flow of responsible information last beyond this crisis? Could it extend into our upcoming presidential campaign?

Zuckerberg was less sanguine. Right now, Facebook is tackling “misinformation that has imminent risk of danger, telling people if they have certain symptoms, don’t bother going getting treated …. things like ‘you can cure this by drinking bleach.’ I mean, that’s just in a different class.”

That black and white clarity cannot easily be extended back into the grays of political battles, he said. While social media may be mirroring the solidarity of the moment, it’s hard to see how it would prolong it.

“It’s perhaps a positive sign that, despite how polarized people are worried that society is, people can pull together and try to get things done and support each other and recognize people who are heroes on the front lines fighting this stuff,” Zuckerberg said. Given that the pandemic is likely to go on for a while, he said: “It’s hard to predict exactly how it plays out beyond that. And that’s not really my job, anyway.”

Tweets by @forbes_india
Simplifying the path to cashless economy
The man with 17,700 bottles of hand sanitizer just donated them