As 2020 Tokyo Olympics gets underway later this month, we take a look at the Indian contingent to find India's medal hopefuls across different sports 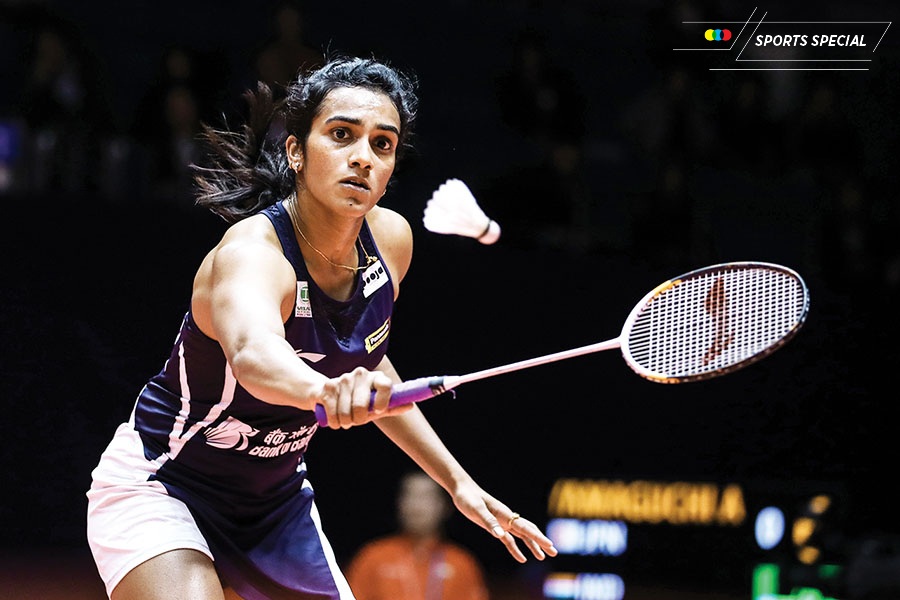 PV Sindhu
Age: 25; Sport: Badminton
Why a medal contender: The 2016 Rio Olympics silver medallist will be eyeing gold in Tokyo. The fact that Spaniard Carolina Marin, who beat her to the gold in 2016, is out due to an injury, makes Sindhu a contender. She won the World Championships in August 2019. Though 2021 didn't start off too well for her, the recent Swiss Open and the All England Badminton Championships were good. She has been working on improving her performance with South Korean coach Park Tae Sang.
Challenges: Since most Chinese shuttlers have not been seen in action this year, they might challenge her with an element of mystery. 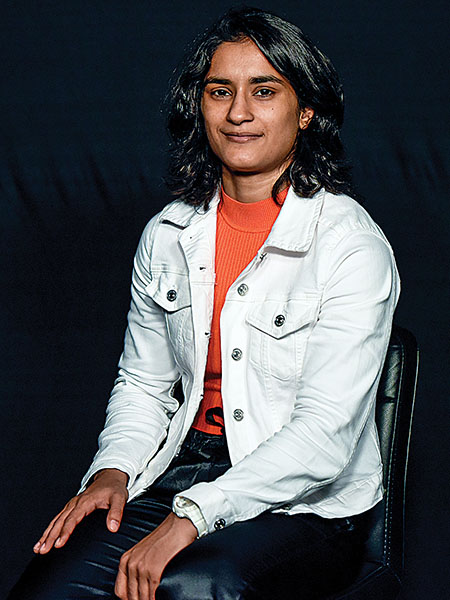 Vinesh Phogat
Age: 26; Sport: Wrestling
Why a medal contender: Vinesh Phogat has been staking her claim to an Olympics medal since 2018 by winning golds in the Asian Games and Commonwealth Games in the same year. An injury had forced her out of the 2016 Rio Olympics quarter finals in the 50 kg category. But now, with the category change to 53 kg, this wrestler has already bagged gold medals at the Yasar Dogu International and Poland Open, and bronze medals at the Asian Wrestling Championships and World Wrestling Championships in 2019. She concluded the 2020 competition season with a gold at the Rome Ranking Series.
Challenges: A tough fight will come from Japan's Mayu Mukaida, who has pinned the Haryana wrestler in three of their previous meetings. The ace grappler will also have to keep a check on her issues with low blood pressure. 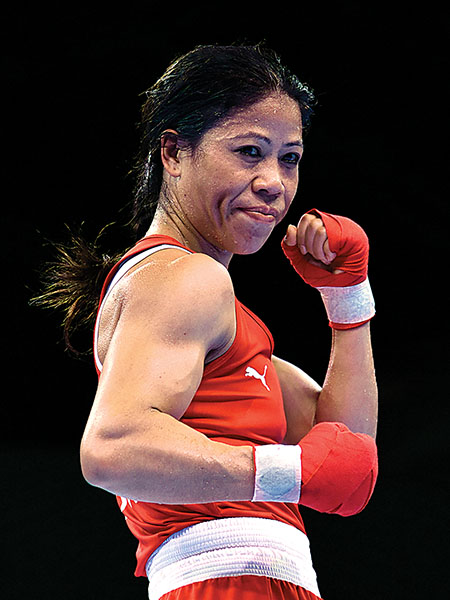 MC Mary Kom
Age: 38; Sport: Boxing
Why a medal contender: A bronze medallist at the 2012 London Olympics, MC Mary Kom will be hoping for a podium finish in what would be her last appearance at the Games. Having proved that age is just a number by winning her first gold at the Commonwealth Games when she was 36, the six-time World Champion has shown that she is hungry for more—she recently won a silver at the Asian Championship. Kom, who failed to make the cut for the 2016 Rio Olympics, says she won’t be satisfied till she bags a gold. And her experience will come in handy as she fights for that elusive prize.
Challenges: Her returns are modest in the 51 kg (flyweight) category, which she is competing in. 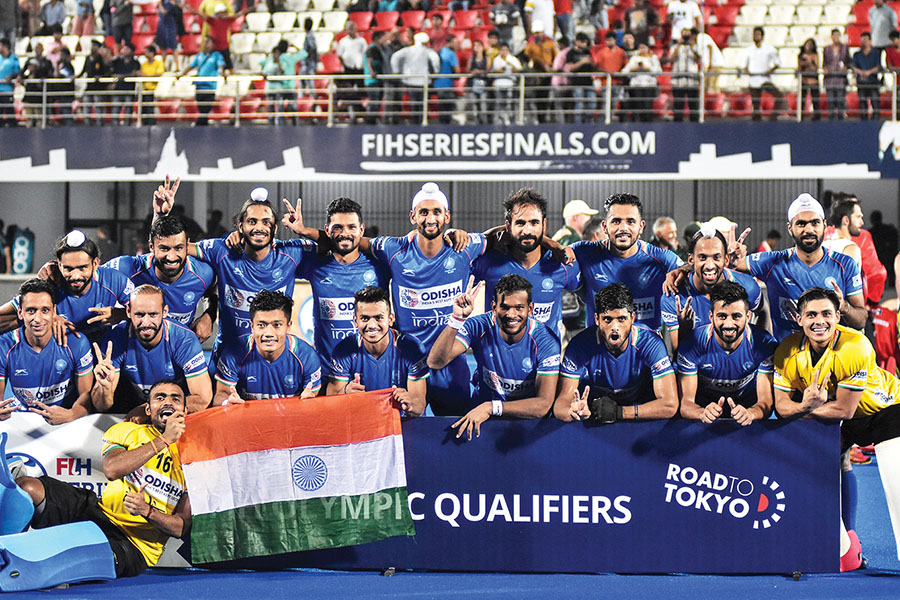 Indian men's hockey team
Why a medal contender: The Indian men's hockey team has an Olympic history of winning the gold medal eight times. But the team is under more pressure because they’re aiming to break the four-decade-long medal drought, as their last one was in the 1980 Moscow edition. The team’s strength is their defence, and they also have six experienced players who have handled big-match pressures in the past. The team has been performing well this year, with successful tours to Europe and South America. Recently, in an Argentina tour, they scored 12 goals in four practice matches and five in two FIH Pro League games against the Olympic champions.
Challenges: The team has been through many lows in the Olympics and also underperformed at the 2016 Rio de Janeiro and the 2012 London editions. Prominent strikers Akashdeep Singh and Ramandeep Singh are missing from the current squad. The team has 10 debutantes, some of who haven’t experienced the pressure of such high-octane international matches. 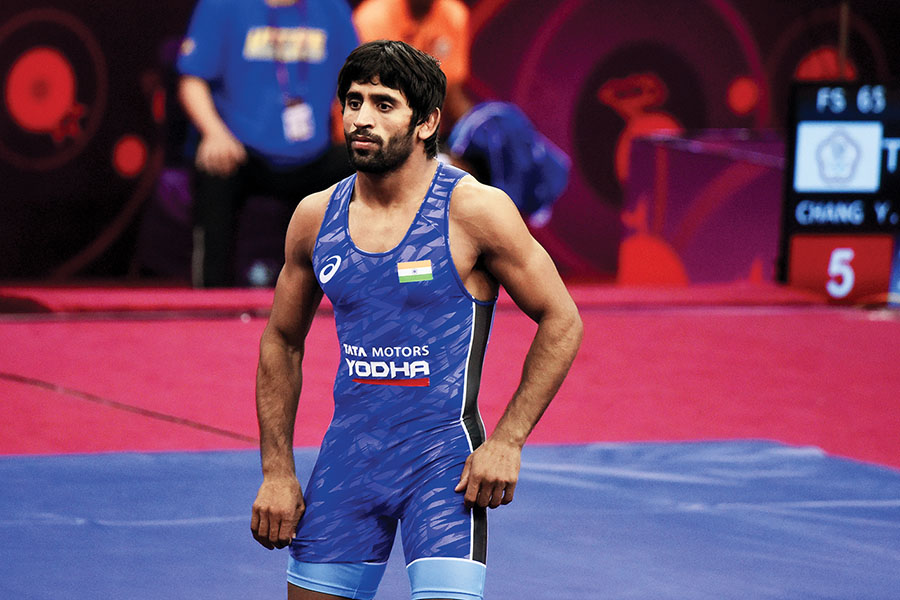 Bajrang Punia
Age: 27; Sport: Wrestling
Why a medal contender:  Punia has finished on the podium in every international tournament he's competed in since 2019. Earlier, the Haryana grappler struck gold in both the Asian Games and the Commonwealth Games in 2018, and a silver in the World Championships that year. At 27, he has three World Championship medals, two in the latest two editions. His red-hot form continues in 2021: Punia won the Matteo Pellicone ranking series tournament in Rome in March to regain the No. 1 ranking in his category, and followed it up with a silver in the Asian championships in Almaty.
Challenges: Propensity to concede early points and stiff competition in his 65 kg category. 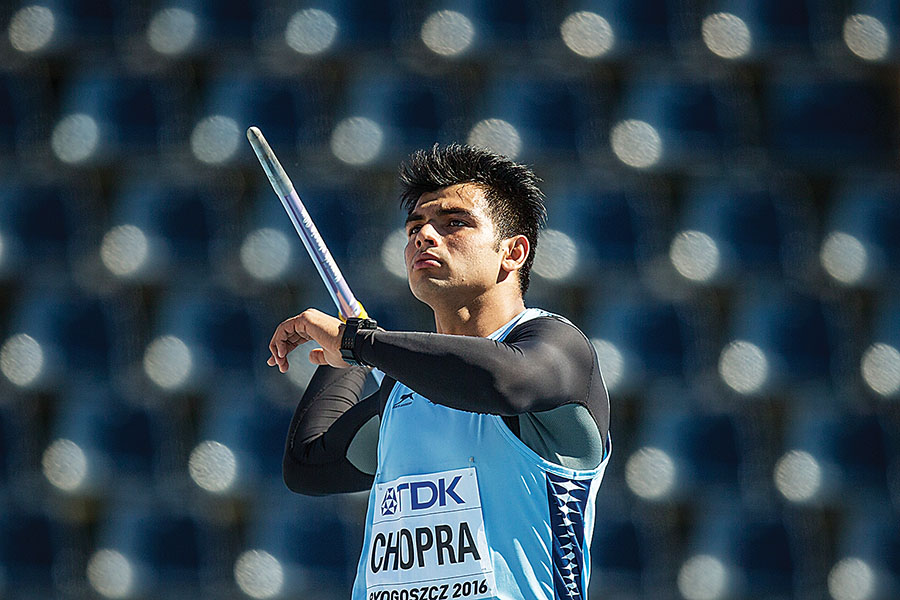 Neeraj Chopra
Age: 23; Sport: Javelin thrower
Why a medal contender: In 2016, Chopra became the first Indian athlete to set a world record when he won gold at the under-20 World Championships in Poland. Later that year, he became the second Indian athlete, after Milkha Singh in 1958, to win both the Commonwealth and Asiad golds. This March, he set a new national record with a throw of 88.07 m at the Indian Grand Prix, Patiala. Due to the Covid-19 pandemic, he returned to international competitions after nearly 18 months since he qualified for the Tokyo Olympic Games in January 2020 in South Africa. Recently, he won gold medals at the Lisbon Grand Prix and Karlstad Grand Prix in Finland.
Challenges: He needs to break the 90 m barrier to be a medal contender at Tokyo. He lost two years to an elbow injury in 2019 and the Covid-19 pandemic, because of which he couldn't participate in many international competitions. 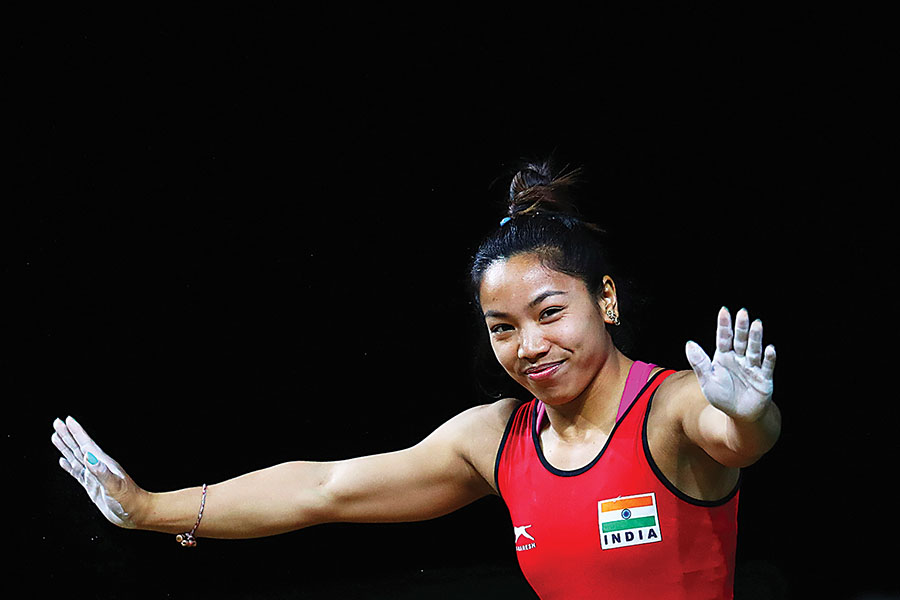 Saikhom Mirabai Chanu
Age: 26; Sport: Weightlifting
Why a medal contender: Former world champion Chanu smashed the clean and jerk record in April this year by lifting 119 kg in her final attempt and created a new record at the Asian Weightlifting Championship in Tashkent. In recent interviews, Chanu has been vocal about how she is confident of bagging a gold at Tokyo and is ready to set a new world record.
Challenges: Chanu’s snatch technique is still not up to the mark, although she has been rigorously training to improve it. 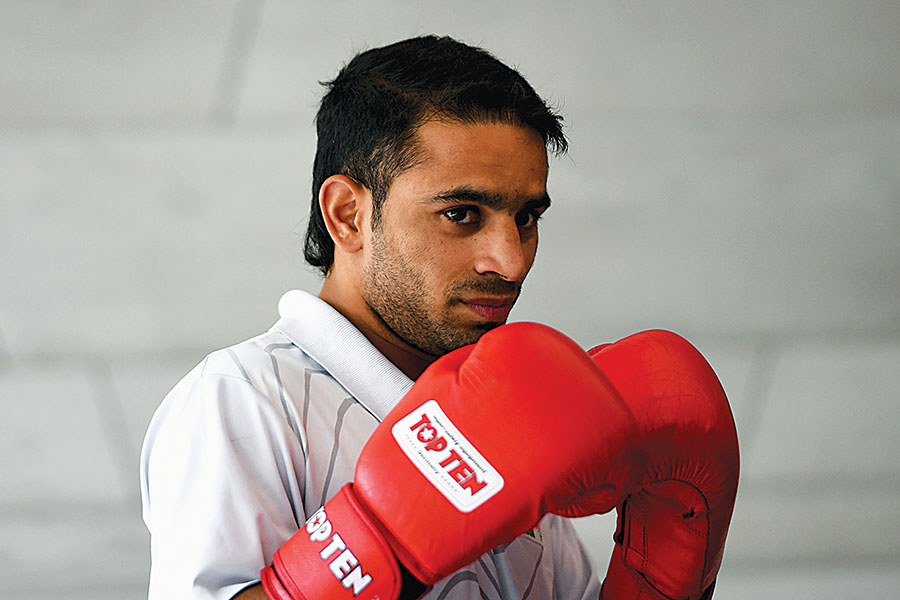 Amit Panghal
Age: 25; Sport: Boxing
Why a medal contender: Within four years of joining the senior national circuit, in 2017, the diminutive boxer from Haryana has built himself a CV with lofty achievements. Panghal won an Asiad gold in 2018 by beating the 2016 Olympic champion, a Commonwealth Games silver in the same year, and became the first Indian male boxer to win a silver in the World Championships in 2019. His achievements propelled him to the world No. 1 rank in the 52 kg category. His silver-winning run in the 2021 Asian Boxing Championship in May will give him the steam and confidence to take on the big guns in Tokyo.
Challenges: A mixed bag return since the Covid-19 lockdown. 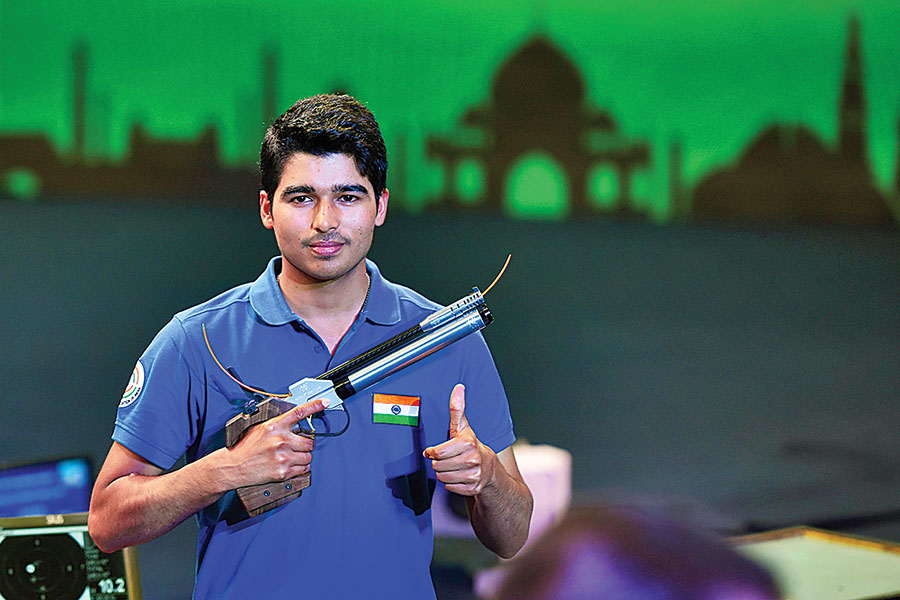 Saurabh Chaudhary
Age: 19; Sport: Shooting (10 m air pistol)
Why a medal contender: Chaudhary is already an eight-time ISSF World Cup gold medallist. This tally includes the successes in New Delhi and Munich in 2019. He won a silver at the World Cup in New Delhi earlier this year, and a bronze in the Rio de Janerio edition in 2019. His consistency makes him a favourite to win a medal at the Tokyo Olympics. Since he started competing in senior-level tournaments in 2018, he has qualified in every single one of them.
Challenges:  His age shows his inexperience. Competing on a stage of this scale needs him to keep his nerves and he will need some guidance in this area. His recovery from Covid-19 can be an issue to his fitness. 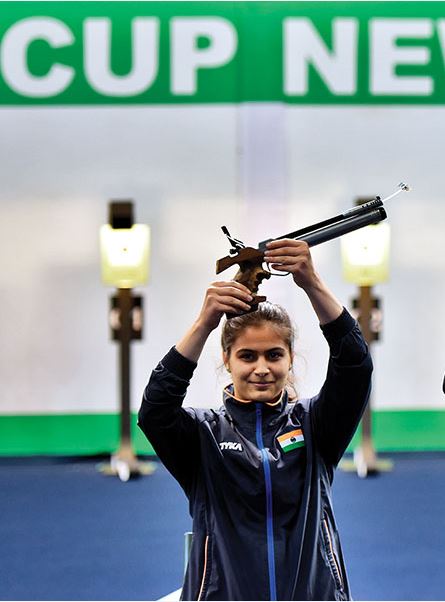 Manu Bhaker
Age: 19; Sport: Shooting
Why a medal contender: One of India’s biggest medal hopes, Manu Bhaker has won almost everything, including becoming the youngest shooter to win a gold at the ISSF World Cup in 2017, since an impressive start to her career. At Tokyo, she will be fielded in both the women's 25 m pistol and her pet 10 m air pistol events. The Olympic debutant came up with a stellar show in the Minimum Qualification Score section of the women's
25 m pistol event at the European Shooting Championship in early June, finishing ahead of compatriot Rahi Sarnobat. Top podium finishes at the 2018 Commonwealth Games and Youth Olympics, apart from three titles at the Junior World Cup, have raised hopes of a medal from her.
Challenges: Struggles to keep her composure when the chips are down.

Tweets by @forbesindia
Thoughts on real estate
Does India care about free speech? Lesser than Russia