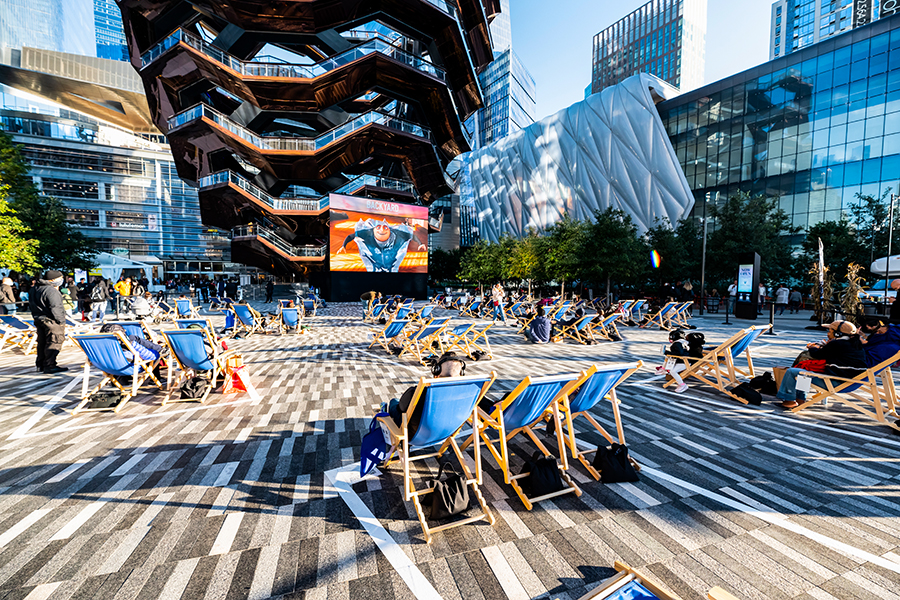 People watch a movie curated by the Tribeca Film Festival in a socially distant pods with cabana-style seating in The Backyard at the Hudson Yards as the city continues the re-opening efforts following restrictions imposed to slow the spread of coronavirus on October 17, 2020 in New York City. The pandemic has caused long-term repercussions throughout the tourism and entertainment industries, including short-term and permanent closures of historic and iconic venues, and costing the city and businesses billions in revenue.  (Photo by Noam Galai/Getty Images)

Segregation, as history and modern times have shown, plays a profound role in social and economic outcomes.

As focus on race relations increases across the nation, Stanford economists Susan Athey and Matthew Gentzkow have used a new way of measuring segregation that can provide clues to different ways for combatting its negative effects.

Instead of focusing on where people live — a common basis for gauging segregation — the researchers used a less static approach for their study. They compiled GPS data from smartphones to analyze movement patterns and compute what they call “experienced segregation” — the amount of people’s exposure to other races as they go about their daily lives.

Gentzkow and Athey — both senior fellows at the Stanford Institute for Economic Policy Research, conducted the study with Tobias Schmidt, a former postdoctoral researcher at SIEPR, and Billy Ferguson, formerly a SIEPR research assistant and now a graduate student at the Stanford Graduate School of Business.

“Until now, we’ve calculated how segregated neighborhoods are, or how segregated schools or workplaces are, but those are coarse approximations to what we might also care about, which is how segregated people’s experiences are in all of the different places they are at — home, work, school, shopping, the movies, walking down the street, going to a park and so on,” Gentzkow said.

“Our study tries to measure that more directly using GPS data,” he said. “It gives us a picture of which activities and which places are pulling towards segregation and away from segregation.”

It turns out that across most metropolitan areas of the United States, people’s actual experiences, as captured by the new measure, are substantially less segregated than what residential segregation measures might indicate.

That finding suggests standard measures overstate the overall extent of segregation in the U.S, but it doesn’t mean segregation is less of a problem, the researchers say. The study, in fact, finds that residential segregation and experienced segregation across cities are highly correlated. Both measures tend to be higher in the South and the Great Lakes region, and tend to be lower in the upper Midwest and Northwest.

Also, higher levels of exposure to diversity appear to be consistently associated with certain population characteristics, according to the study. Cities in which experienced segregation was found to be relatively lower than residential segregation are denser, wealthier, more educated, and have high levels of public transit use.

“Residential segregation can result in differences in many other dimensions, including social interactions as well as access to shopping and employment. Transportation and density, which in turn depend on urban planning, can mitigate some of those differences,” said Athey, who is also the Economics of Technology Professor at Stanford Graduate School of Business and an associate director of the Stanford Institute for Human-Centered Artificial Intelligence.

The study, detailed in a recent working paper released by the National Bureau of Economic Research, culminates a project started several years ago — long before George Floyd’s death in May sparked nationwide protests and stoked concerns of racial and systemic injustices.

“To develop relevant and effective policies surrounding racial justice, it is important to understand the facts around racial differences,” Athey said. “Measures of the experiences and interactions of racial groups can be used as input to the policy discussion.”

Snapshots of Segregation from Patterns of Pings
The researchers examined aggregated anonymous GPS signal data from a sample of more than 17 million smartphones from January to April in 2017, representing about 5 percent of the U.S. population across 366 metropolitan areas.

To compute experienced isolation, they analyzed the movement patterns of those devices by looking at the GPS pings logged from a range smartphone apps, down to every 500 square feet — or roughly, a city-block radius — throughout the course of a day.

The researchers did not directly know the race of the smartphone users, so they relied instead on the home locations of each device and census data to designate the race as white or non-white.

The device’s whereabouts were matched against a dataset the researchers compiled of tens of millions of establishments and public points of interest across the U.S.

Racial integration, the researchers found, is highest at entertainment, retail, and eating establishments, while time spent at locations like churches and schools is somewhat more racially isolated.

The paper notes that people spend a lot of time outside their neighborhoods. And when they do, they’re more likely to encounter greater diversity than they find at home.

“Commercial places like restaurants and retail shops are a particularly strong force pulling against segregation, while amenities such as churches and schools, which are usually tied closer to home neighborhoods, tend to remain more segregated,” the paper states.

Targets to Aim for Change
By shedding light on where racial isolation occurs throughout the day, the researchers hope their study’s findings provide a more nuanced and improved view to where efforts to combat segregation could be more effective.

Gentzkow and Athey, leading economists known for capitalizing on technology for groundbreaking insights, understand key limitations of the study: The GPS data captures only exposure, not interactions between people; the data sample is not fully representative; and by not having precise race-to-device information, their findings are approximations.

Still, other research has shown the benefits that arise when people of different groups are able to be seen, meet, and interact with each other, the study noted.

“The study’s results point to the fact that anything that we tie to home neighborhoods is going to tend to reinforce segregation,” Gentzkow said.

“One thing we can try to do is think about how to change where people live. It takes a long time for that kind of change to happen,” he said. “This paper points out that people’s actual experiences depend on lots of other things that potentially could change a lot more quickly.”

According to the study, the findings suggest public services tied to residential areas — such as schools and police services — should be a particular focus of diversity efforts.

At the same time, policies that affect the spatial distribution of commercial or leisure activities — or improving the access to those activities — may be just as effective, or more so, than policies targeting housing.

“The evidence is very strong that segregation matters and has really serious consequences,” Gentzkow said. “If we want to understand segregation and do something about it, it’s important to measure it.”

This story was originally published by Stanford News.