We don't like domineering bosses. So why do we put up with them?

When confronted with a controlling, aggressive leader, people "have more power than they think they do," says Deborah Gruenfeld 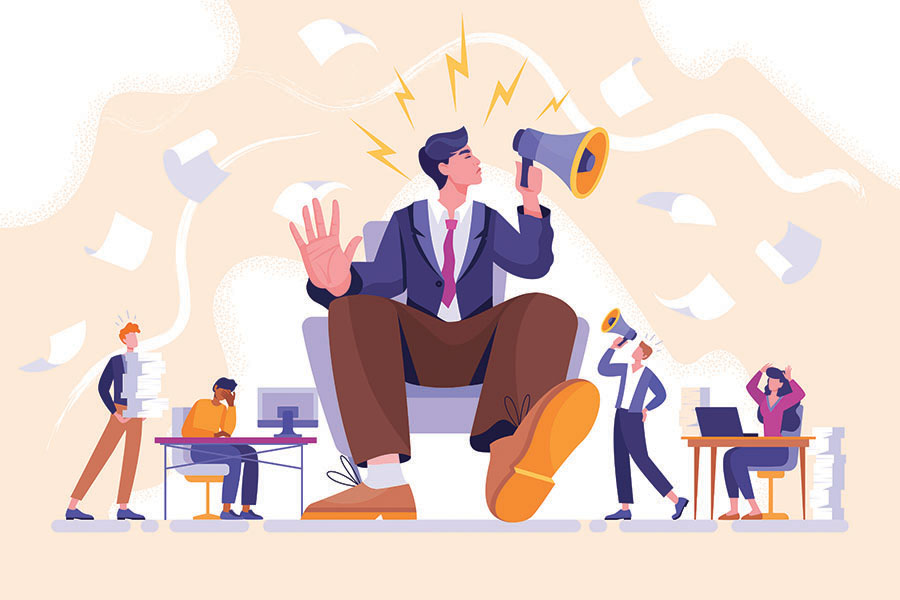 Powerful group dynamic plays an important role in allowing bad bosses to maintain control even when the rest of their organization disapproves of their tactics Image: Shutterstock

Have you ever had a really bad boss? Think Alec Baldwin as Blake in Glengarry Glen Ross, who announces that “coffee’s for closers only” and then threatens the salesmen he supervises with a number of choice terms not suitable to repeat here. Few leaders use quite so much verbal abuse, profanity, and fear to motivate employees. But plenty of leaders use similar, if less extreme, tactics. Deborah Gruenfeld would like to know why so many people put up with them.

Gruenfeld, a professor of organizational behavior at Stanford Graduate School of Business and an expert on the psychology of power, is interested in “dominant actors” like Blake: leaders who assert power by being the most competitive, most aggressive, and most controlling person in the room. “There is this tendency for people to allow others to assert dominance without resisting,” she says. “People who behave this way tend to be very successful even though people really don’t like or respect them very much.”

This is a puzzling phenomenon: Why follow someone who isn’t doing a good job or making good decisions? That kind of deference is illogical, but it’s pervasive. Previous research has suggested that our tendency to bow to the whims of dominant actors results from our fear of them, and what they might do if we refuse to follow them. Other studies have shown that people often defer to dominance because they misinterpret confidence for competence.

In a recent paper published in the Journal of Experimental Social Psychology, Gruenfeld demonstrates that group dynamics are also an important factor in our willingness to accept and obey aggressive bosses. “We live in a world where there’s an expectation that dominance should be deferred to,” she says. “You’re often in a situation where you can’t understand why everyone else is acting as though they respect the person.” But that powerful group dynamic plays an important role in allowing bad bosses to maintain control even when the rest of their organization disapproves of their tactics.

To test this hypothesis, Gruenfeld and Emily Reitopen in new window, PhD ’22, ran four studies. In one test, they asked over 100 Stanford University students and staff members to think of someone they know who is controlling, aggressive, and “tries to get their way regardless of what people may want.” The subjects then answered a series of questions about how much they respected this person and how much they thought others respected him or her. As the researchers predicted, people generally thought that others respected the dominant actor more than they did themselves.

Gruenfeld and Reit replicated these results by asking the same questions to more than 150 members of a trivia league. Each person was asked to rate up to three teammates on how dominant they were. As in the first study, the respondents believed that their fellow teammates had more respect for the most dominant players.

The next experiment was designed to test how the misperception of dominant actors impacts an organization as a whole. Using online surveys, Gruenfeld and Reit asked over 160 participants to evaluate their own respect for and fear of a dominant actor they work with, and to what extent they defer to that person. Crucial to their hypothesis, they also assessed how much respondents thought their coworkers respected this person. Again, they found a gap between how much people respected the dominant actor and how much they believed others did. Additionally, while fear and personal respect were strong influences on whether someone would defer to a dominant actor, Reit and Gruenfeld found that people were also more likely to defer if they perceived that others respected the person.

Also read: Being your own boss can pay off, but not always with big pay

In their final experiment, the authors used an online platform to ask over 400 participants how much they respected a team member named “John” after reading a self-assessment in which he rated himself high on dominance traits. (The participants did not know that John was not a real person.) Then the researchers told participants whether other team members respected John the same amount as they did, or more than they did, and asked them to rate their respect for him again. Finally, the researchers asked the participants whether they would defer to John if he asked them to complete a task. Gruenfeld and Reit found that people who were told that others in their team respected John more than they did were more likely to defer to him, even though they didn’t personally respect him.

Taken together, these findings suggest that not only might people misunderstand how much others respect dominant actors, but that this perception is a powerful predictor of deference — even after accounting for individuals’ respect for, or fear of, that leader.

Also read: How can you say 'no' to your boss in a polite but effective way?

Gruenfeld says these results have implications for how we act in situations where a leader is behaving dominantly but not doing a good job. We can’t wait for others to solve the problem: We all play a part in creating these dynamics. “People don’t realize how powerful norms are in organizations,” she says. People will continue to do what they want if they aren’t being penalized for it. But having disapproval from your peers is often a real and powerful punishment. To make change, she says, people in organizations must be willing to show that the norm doesn’t support certain behaviors.

That doesn’t mean people need to confront problematic leaders directly or in dramatic ways or saddle one person with the responsibility of bringing that leader down. Instead, Gruenfeld suggests that there are subtle ways to create friction — a disapproving look, a longer stare — that can effectively signal that this person has crossed a line and empower everyone in the organization to change the situation. “People complain all the time about why it seems like people who are overly competitive and controlling tend to get ahead,” Gruenfeld says. “They don’t recognize that they have more power than they think they do in those situations.”

Tweets by @forbesindia
Will the Rs 3,500 crore PLI scheme for toy manufacturers make India a global hub for playthings?
CarTrade is zero-debt, has cash reserves and is profitable. Why is it's stock getting battered?